The IKS Somraw was a Klingon Raptor-class scout that was in service with the Klingon Imperial Fleet in the mid-22nd century.
In 2151, the Somraw attacked and raided a Xarantine outpost. Among the goods the Somraw crew stole from the outpost was some Xarantine ale. After drinking the ale, however, the crew became infected with a deadly toxin. Sometime later, the Somraw was disabled in an attack by a Xarantine ship and forced to hide in the atmosphere of a class 9 gas giant while they made repairs. Before the repairs could be completed, however, most of the crew fell victim to the toxin from the Xarantine ale and collapsed, leaving the Somraw in a decaying orbit.  Which features for the mission 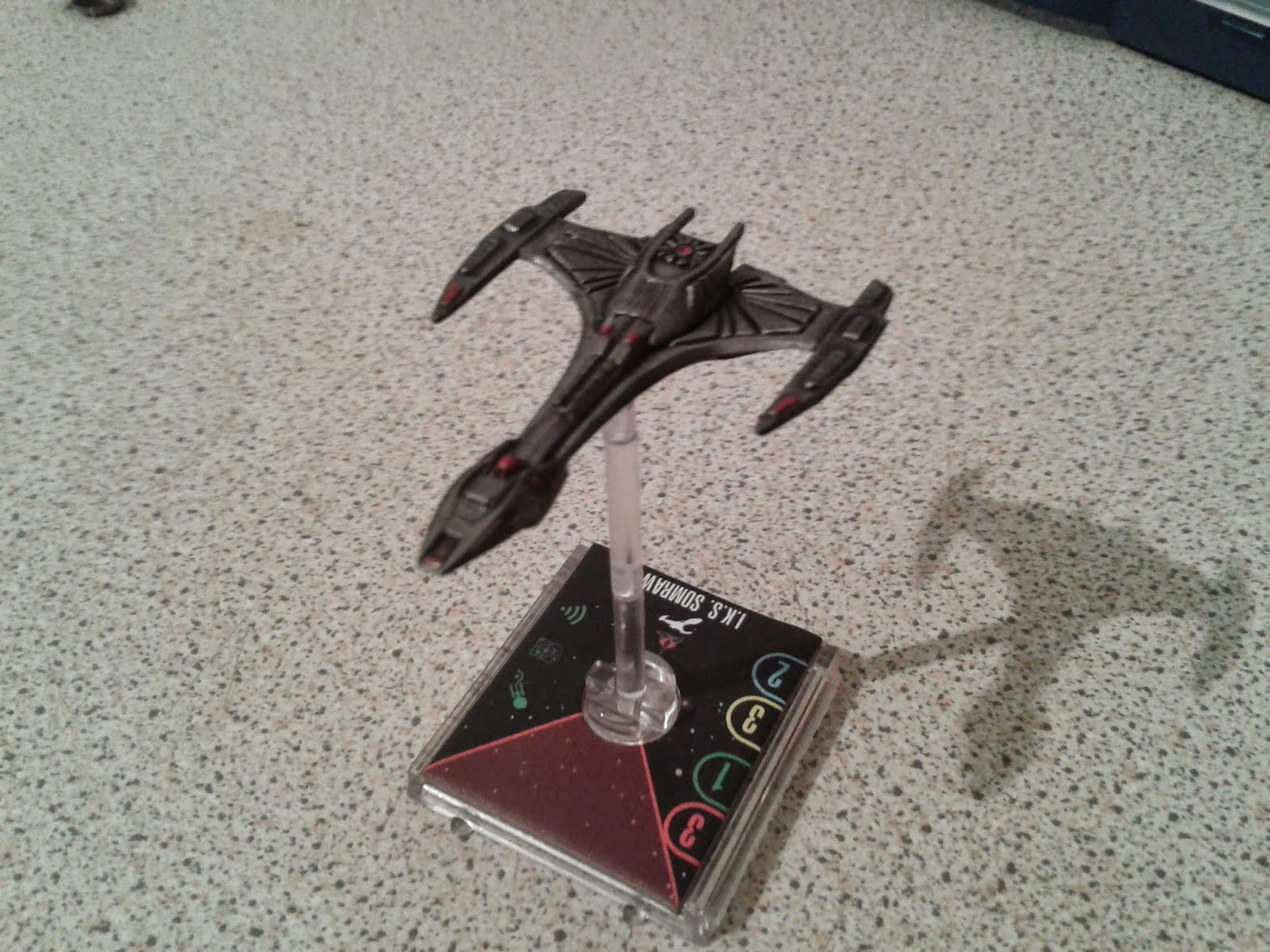 The Somraw was later discovered by the crew of the United Earth starship NX-01 Enterprise. Investigating what he thought was a shipwreck, Captain Jonathan Archer had


an away team board the Klingon vessel. Once inside, however, the away team was stranded on the doomed vessel when their shuttlepod was taken by the only conscious Klingon crewmember, Bu'kaH. With no way to leave the ship, the away team attempted to repair the vessel. However, they ultimately escaped by using the ship's complement of photon torpedoes to push the Somraw into a higher orbit. Bu'kaH, who had been captured by Enterprise, was then brought aboard to help the away team complete the rest of the repairs. Once the repairs were complete, and with the crew now cured thanks to a treatment devised by Doctor Phlox, the Somraw was able to free itself from the planet's atmosphere and depart for regions unknown. (ENT: "Sleeping Dogs")

Now this is a somewhat different unboxing, as its already been done, but as usual contains all the relevant tokens and dials. 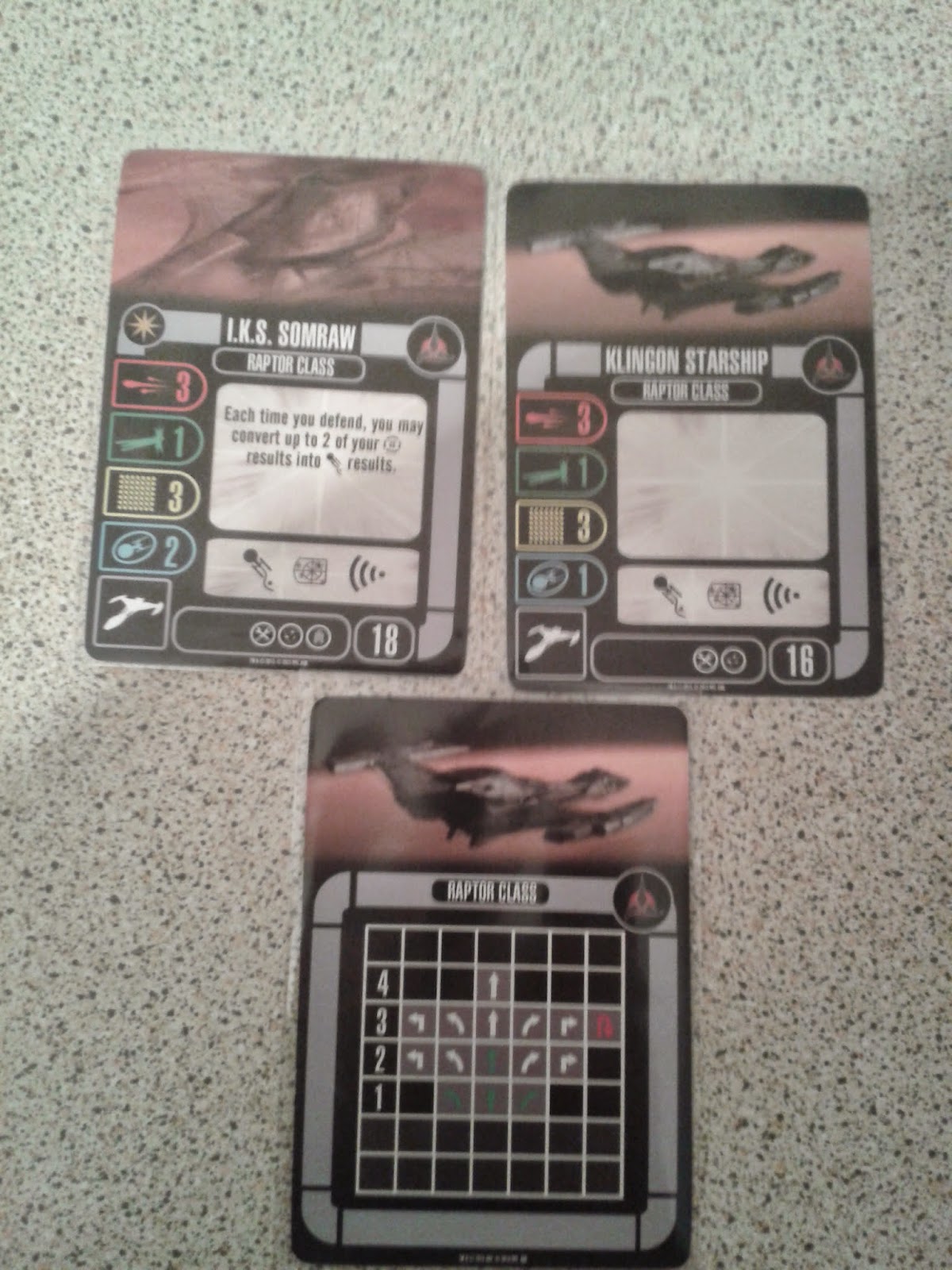 As you can see the Somraw Raptor class is cheap, manoeuvrable with good firepower but not much hull and shields.  It can not cloak, but has evade target lock and scan, and an inbuilt ability to turn battlestations into evade.  Which is handy since it doe not have a natural battlestations result.  It makes it a little harder to kill. 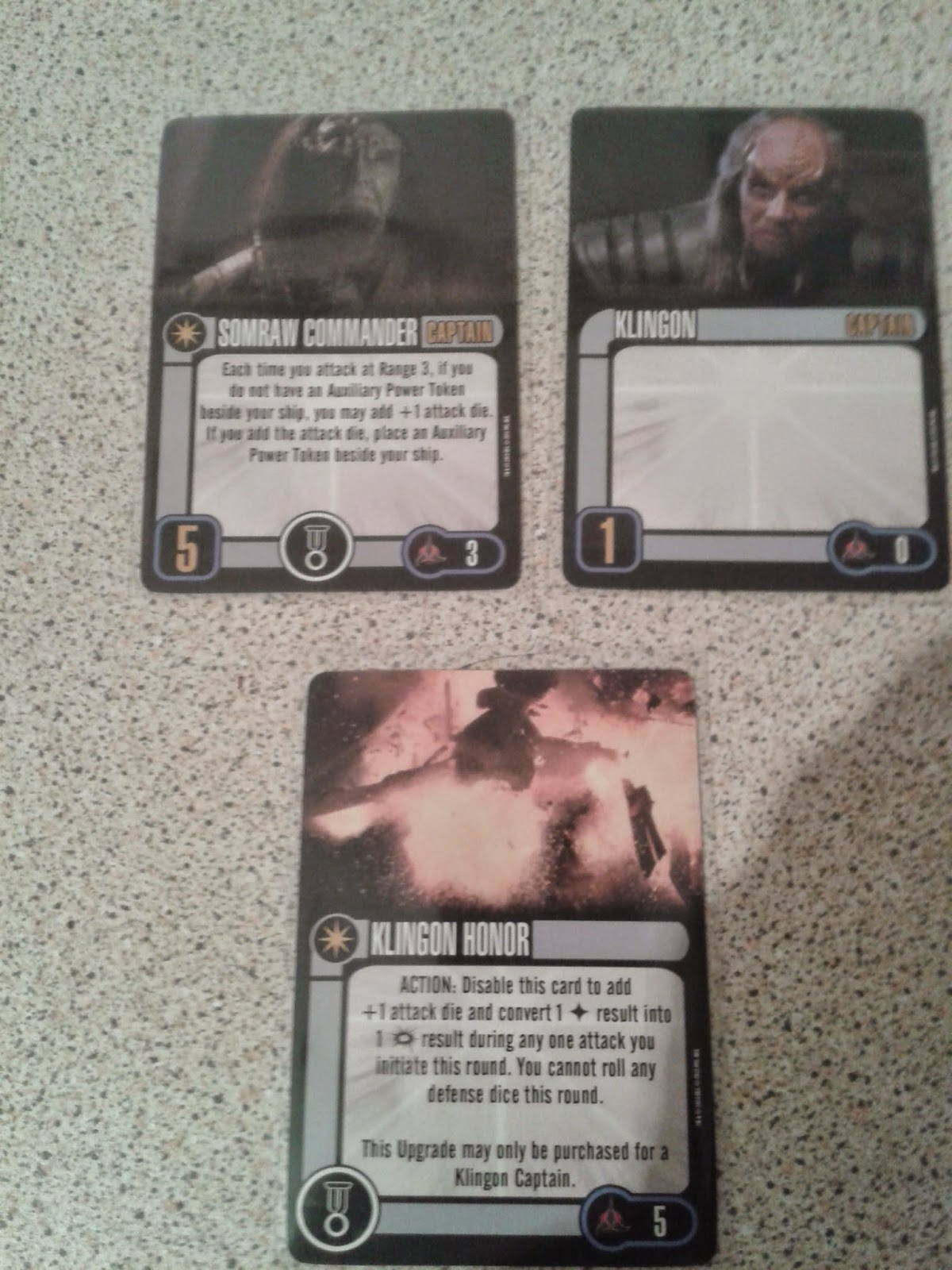 It comes with only 2 captains, the Generic free captain as always, and a skill 5 Somraw Commander.  He adds options to give more firepower at long range, is only 3points and has an elite talent option.  Klingon Honor is the talent in this pack, allowing you add an extra attack dice and turn a hit into a critical.  The downside is you can not roll defence dice.  The card is not a discard, just a disable so it is reusable.  It is handy if you are out of your enemy fire arc to add some more punch to your attack. very good at range 1 as you are throwing 5 dice with such a cheap ship, and range 3 with the captains ability, though it does add an auxiliary power token. 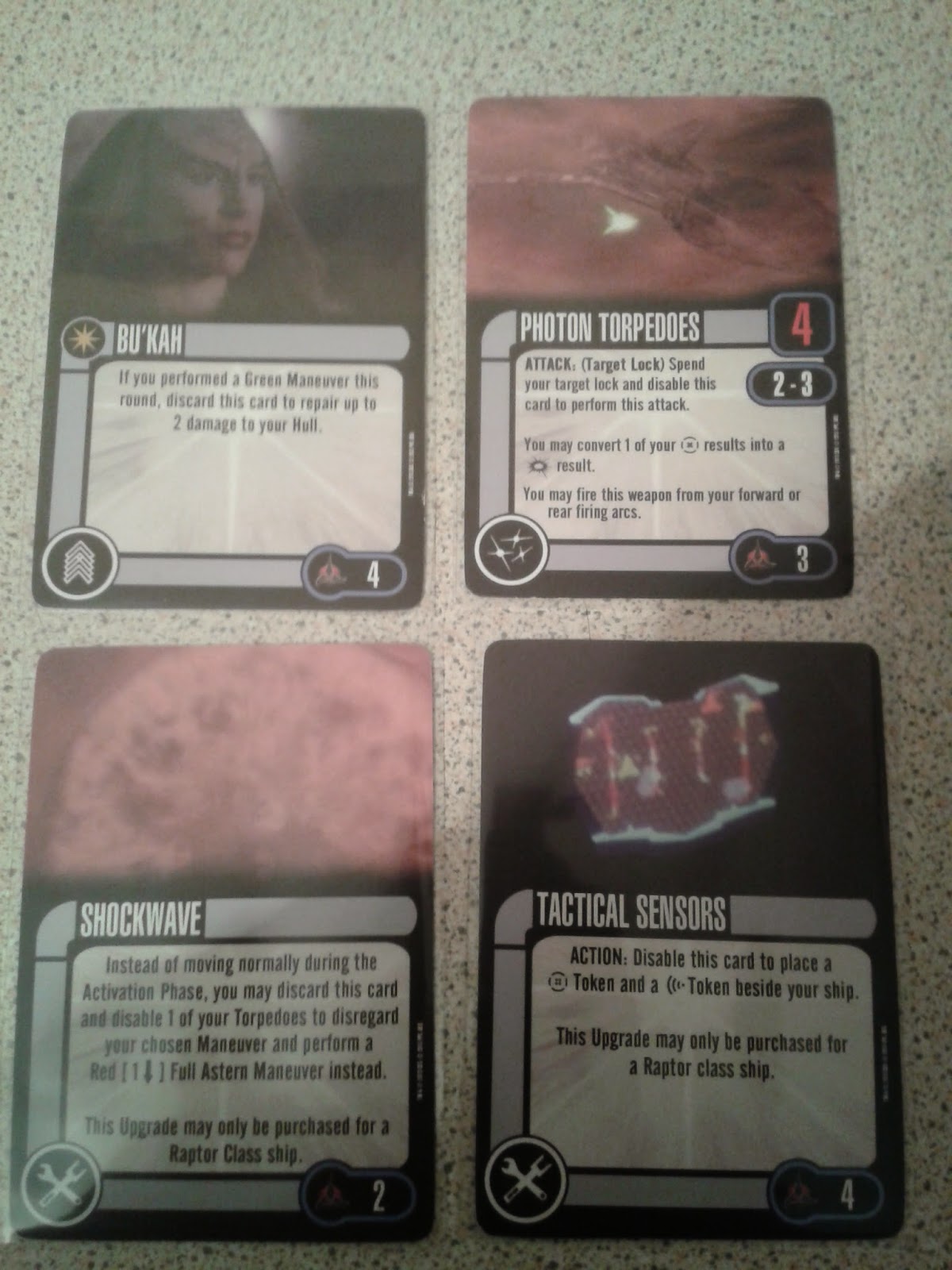 You also get one crew Bu`kah, who is useful for healing up the hull. When you have a ship as fragile as this it is a handy card.  For weapons we have a cheap Photon torpedoes 4 dice attack for 3 points with a battlestation to crit? not bad at all.
There are two tech upgrades to choose from, shockwave which is a one use discard card to allow you to pull a one reverse. The cost is high, a discard, an auxiliary power token AND disabling your torpedoes. It could be useful, but I think the other card Tactical Sensors is more use, as an action disable it to get scan and battlestations.  Reusable, and handy for when you need maximum punch n attack. 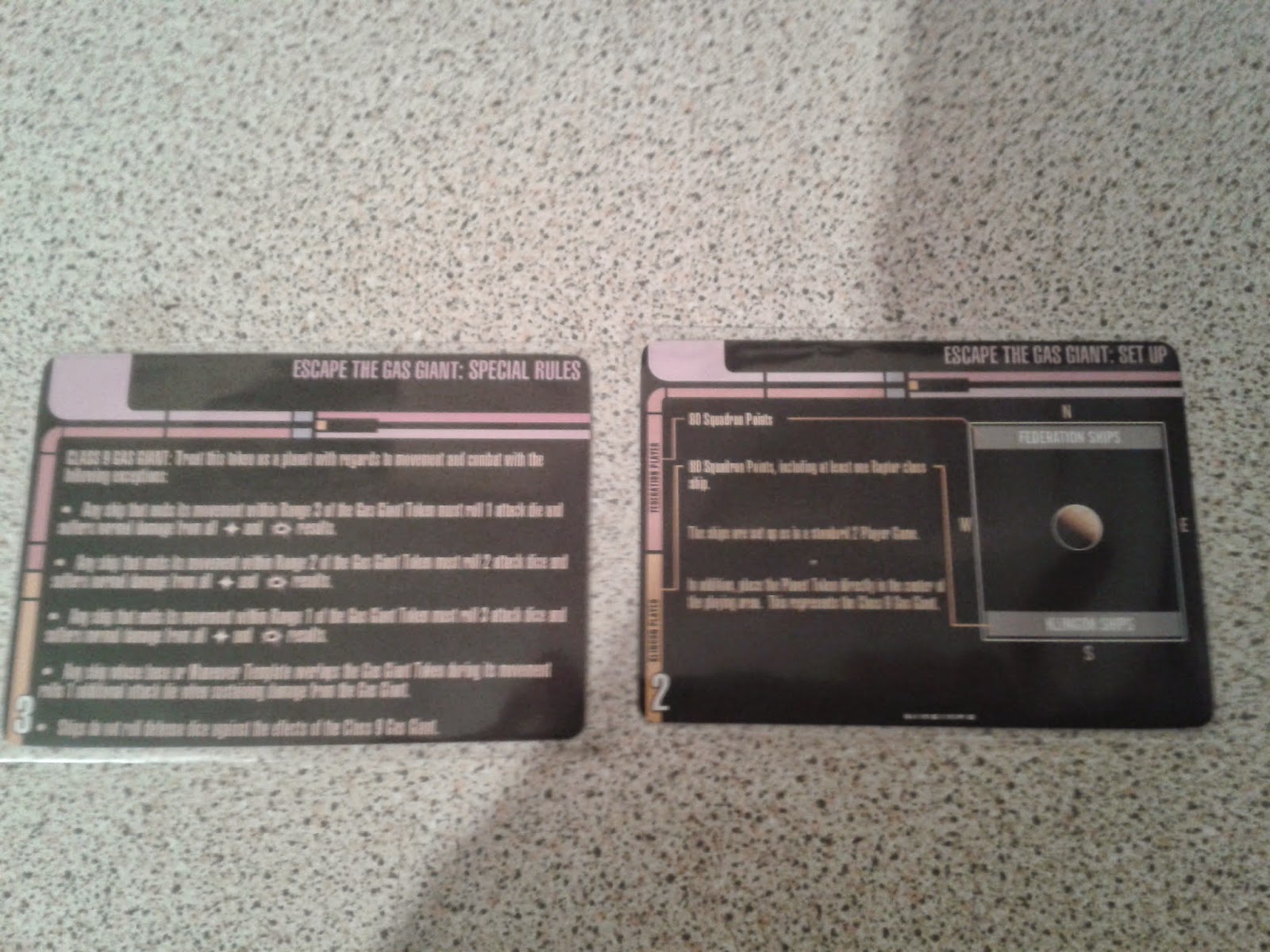 The mission for this ship is Escape the gas giant, which adds lot of naturally occurring options for damage from the environment.  It looks fun, and worth a try, as always the missions add great variety to the game

The ship is really detailed, and this nice and simple repaint really shows that. 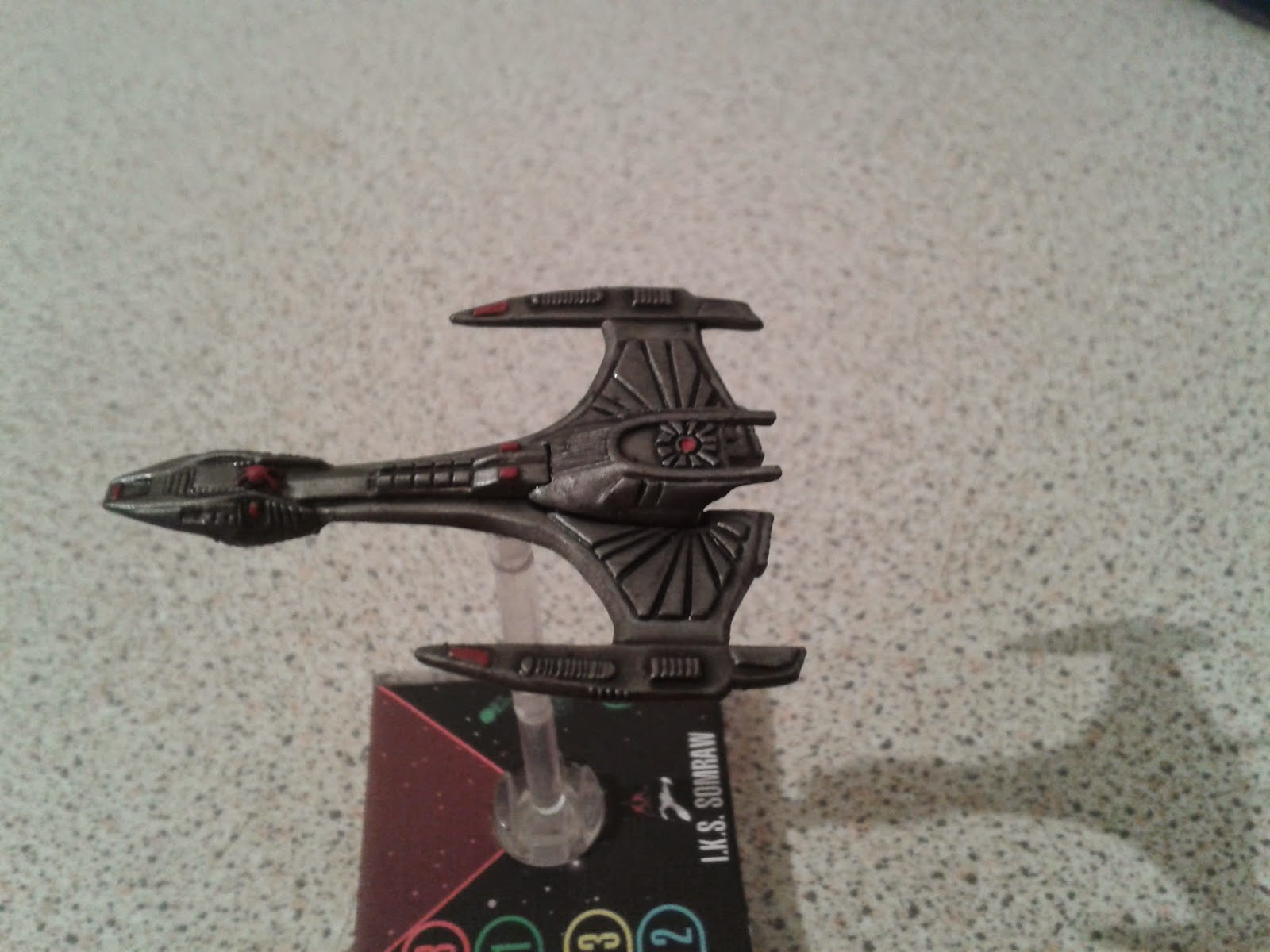 It looks sleek and fast, just as a scout ship should. 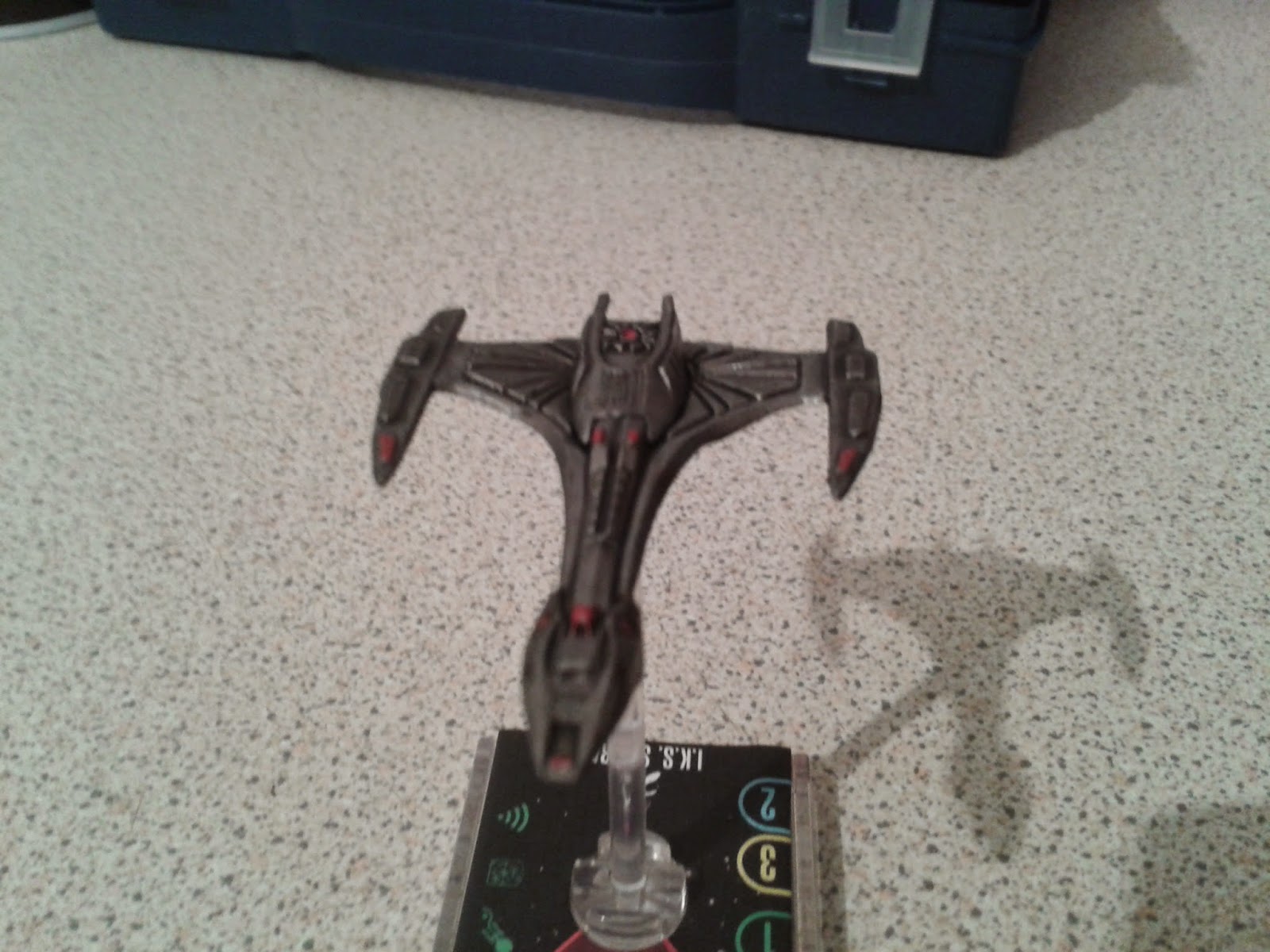