Olivia and I decided we needed to play a battle,  only using the starter set cards and creatures, so we decided a simple 1v1 dragon duel would be the way to go.  50 points.  Olivia Picked Balagos the Red dragon. 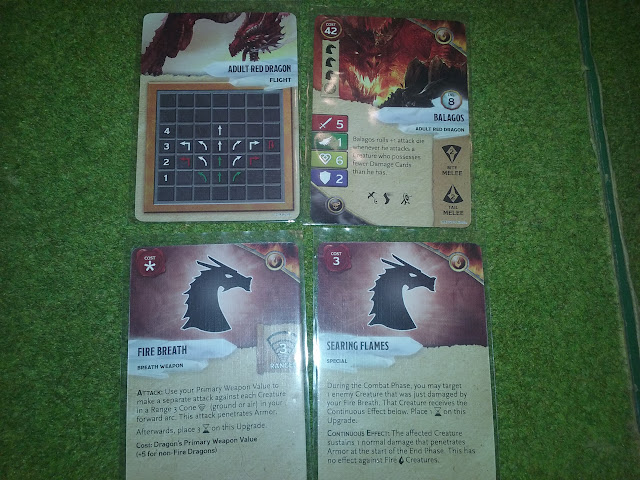 For upgrades she gave him Fire Breath for an attack that can penetrate armour, and Searing flames to inflict more damage. 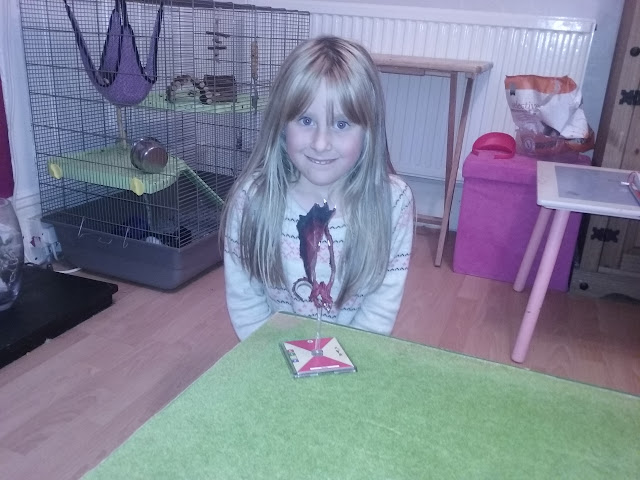 Prepared for battle, you can really see how big the model is, and nice looking too. 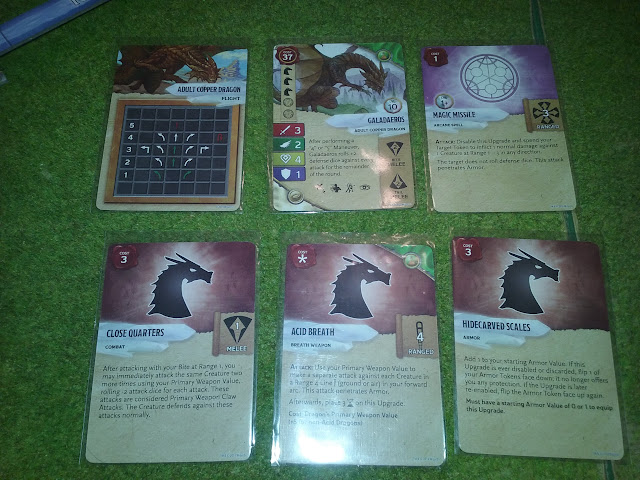 I took Galadaeros the copper Dragon, and added some upgrades, magic missile to add an all round attack, close quarters so I can roll some ectra dice after I attack up close as my attack is not great.  Hidecarved scales to add an extra armour to hopefully survive longer, and Acid breath for a long range attack that can penetrate armour.

So who will win, The Evil Balagos? or the good Galadaeros? read on and see. 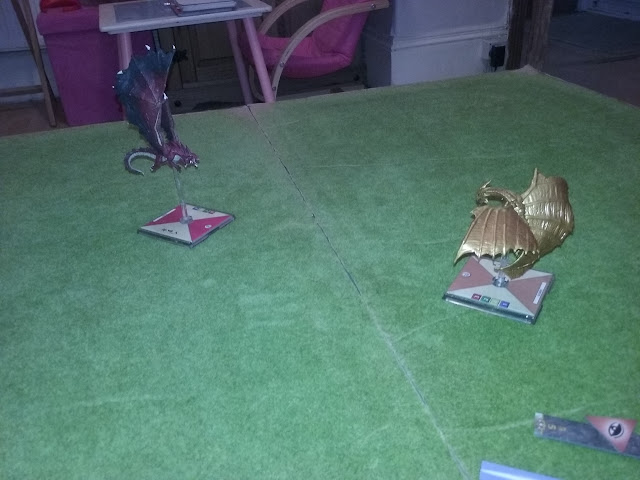 The dragons saw each other across the field, and closed in.... 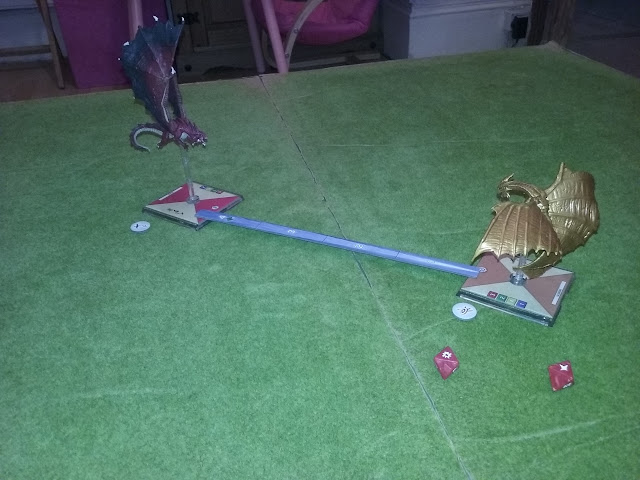 Galadaeros used his acid breath attack on Balagos getting a hit and a critical. as the attack pierces armour balagos took the damage.
Balagos spent his evade token to cancel the hit, but the critical went through. 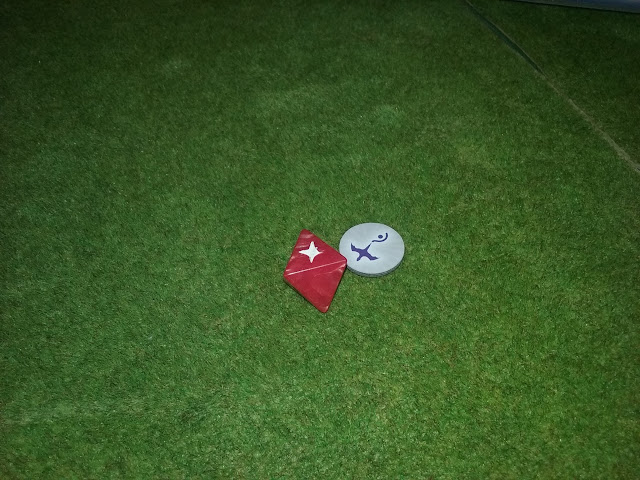 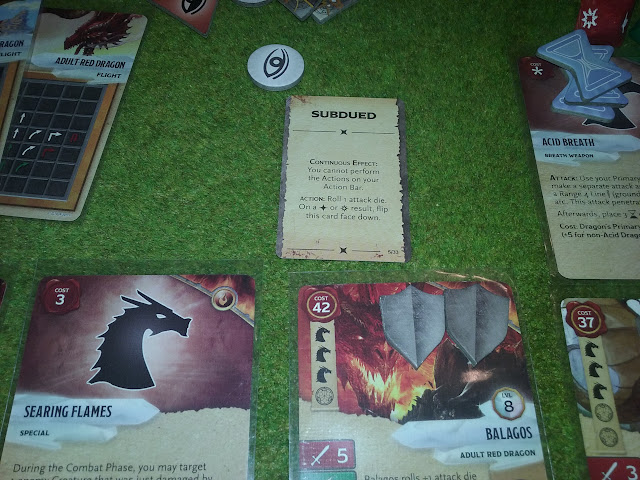 Balagos was subdued, he could not use any actions on his bar, though he could try to get rid of this by rolling a dice for his action. 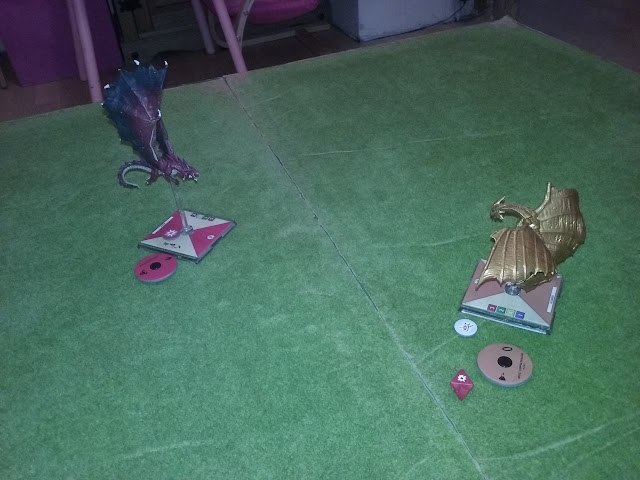 The two prepared their dials ready for the next turn when things would get close up. Balagos was still out of range for his attacks so wanted to get in close. 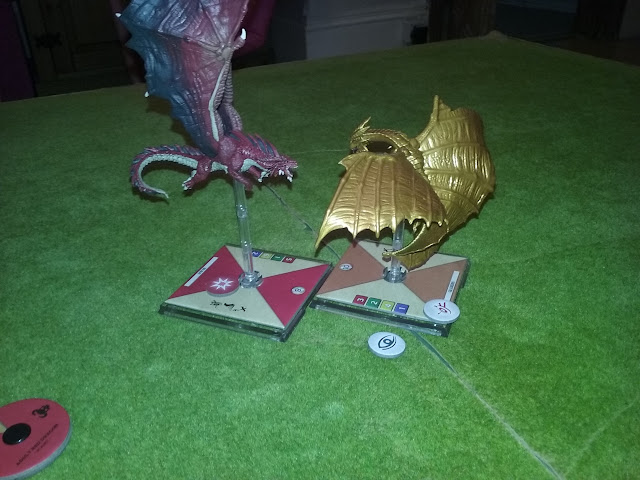 They ended nose to nose.  unlike other games you do not lose your action if you are touching, Balagos kept trying to get rid of his subdued, but failed.  Galadaeros took a concentrate action to hopefully maximise his hits. 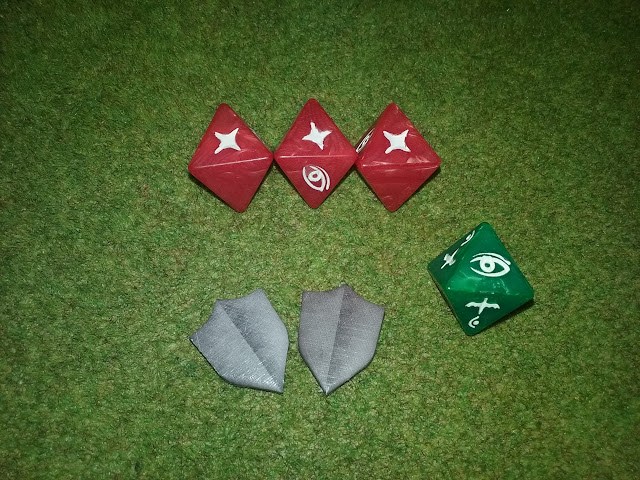 Galadaeros is a higher level so he attacked first, 3 hits! Balagos rolled a concentrate, and two hits where soaked up by his armour so he took another damage 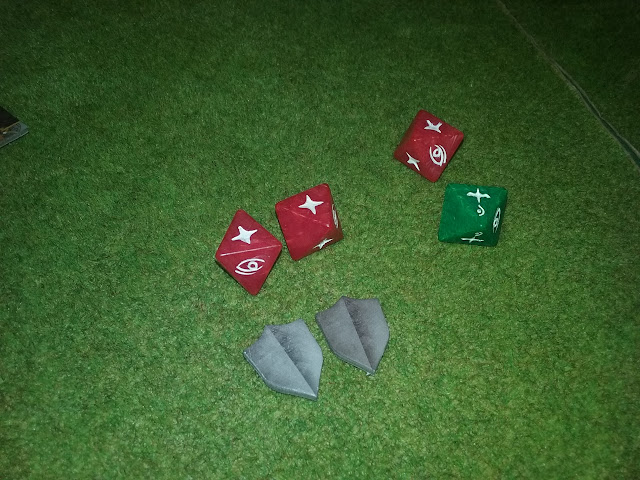 He attacked back, and hit 3 times, but Galadaeros evaded one, and his armour (due to having hidecarved armour) saved him from damage. 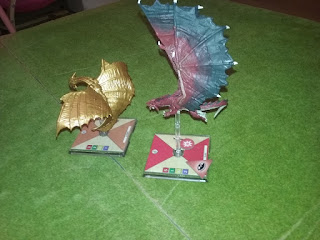 Balagos turned around, but it exhausted him so we would not be able to try to get rid of his subdued until he had done a green manoeuvre to clear his exhaustion. 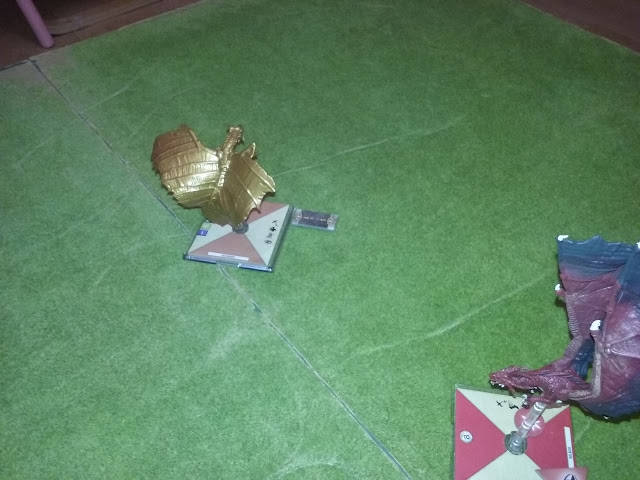 Galadaeros turned tightly then did a feint to the right to get out the arc of Balagos, he used his previous target token to cast magic missile at Balagos that pierces armour and did another damage to him. 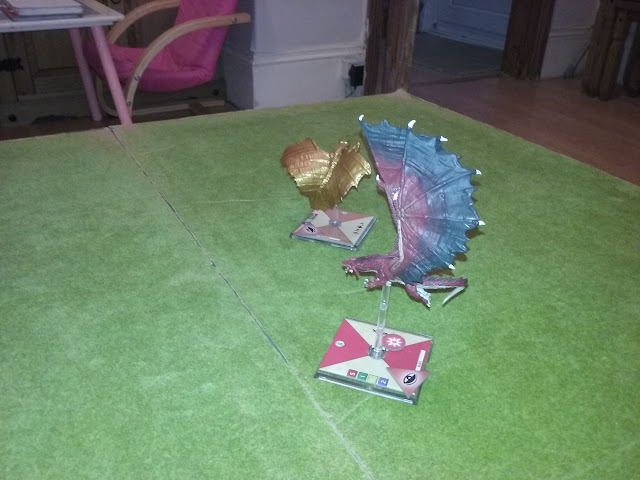 Galadaeros would have to do a green manoeuvre to clear his exhaustion so he could use his action to remove the disable from the magic missile spell, 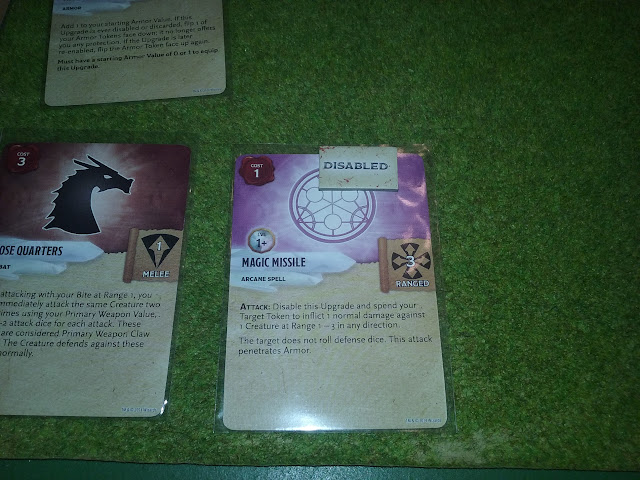 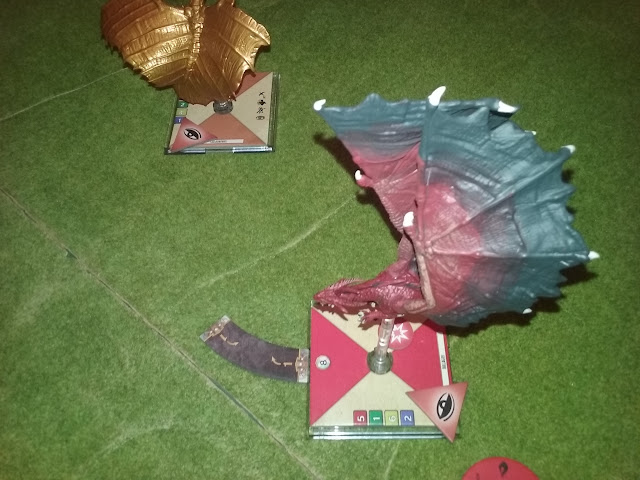 Balagos lays down a green move, and closes in, getting rid of his exhaustion, then he rolls to get rid of his subdued and succeeds, turning it down, so next turn he can do actions again. 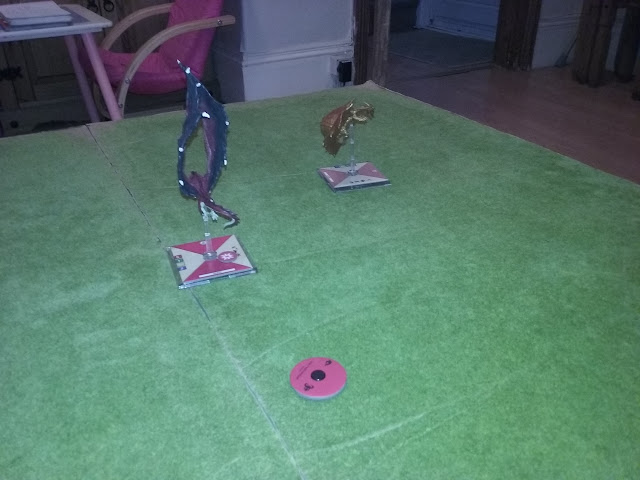 Galadaeros manages to avoid him, for now. 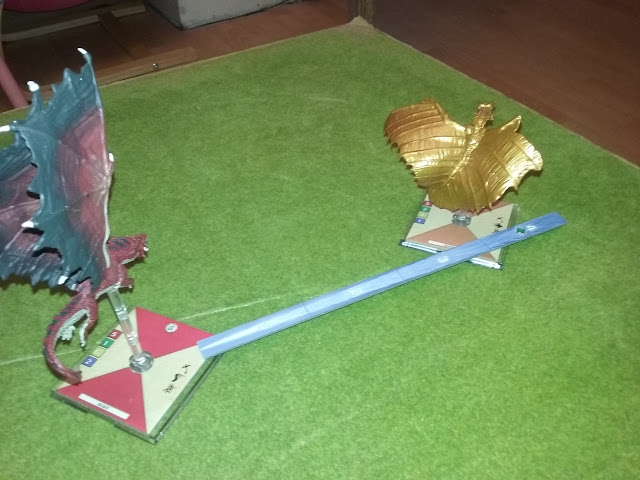 Balagos closes in, and uses his flame breath, it ignores armour and uses his primary attack value so Olivia picks up 5 dice and rolls.... 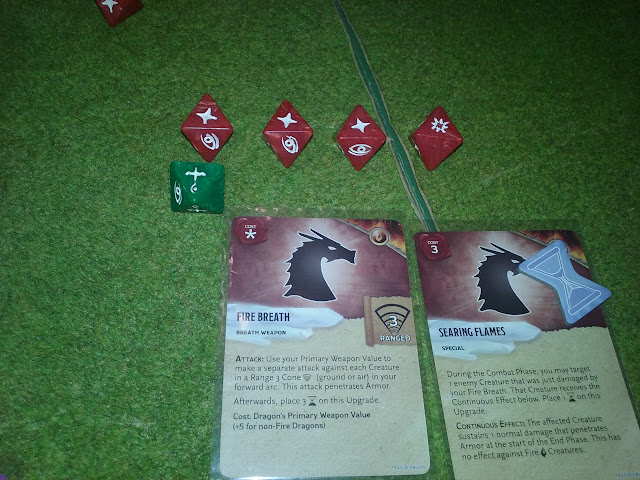 a lot of hits! Galadaeros manages only one evade, so 2 hits and a critical go through as fire breath ignores armour.  Leaving Galadaeros with only one health point left. 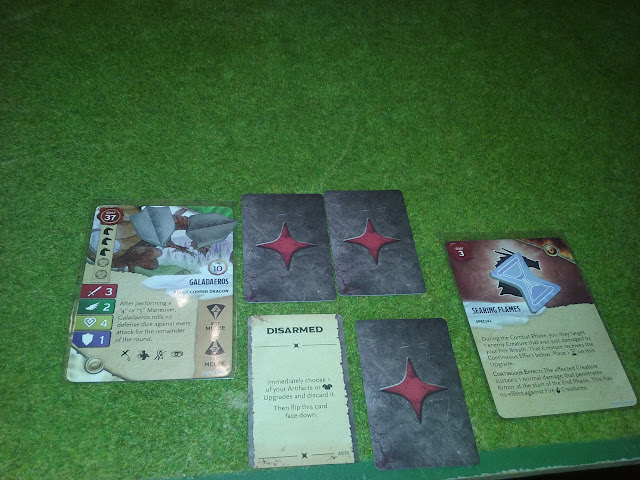 Balagos hen uses Searing Flames, where you put a timetoken on, and anyone you have hit with your flame breath suffers another damage at the end phase. 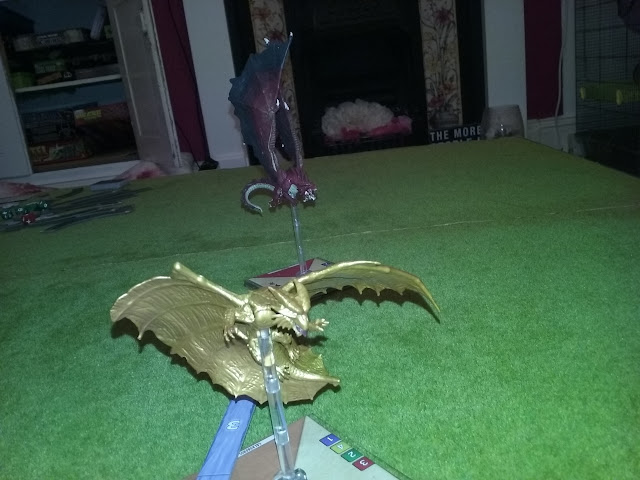 As Galadaeros is out of range to attack back he is removed from play at the end and victory goes to Balagos.

Flame seared from Balagos open jaws engulfing the copper dragon that had been attacking him, he saw him falling burning to lay in a crumpled smoking heap.... A deep roar emanated from Balagos as he flew off ready to take on his next victim.

That was great fun, I thoroughly enjoyed it, even though as usual I got beaten.  I cant wait to try again with different builds, and more on the table! stay with us to see more
Labels: battle report D&D Attack Wing dungeons and dragons