Hey, That’s My Fish! is an engaging, award-winning board game of strategic fish hunting, in which two to four players control determined penguins hungry for their next meal on a bustling Antarctic ice floe. Do you have the mettle to grab more fishy meals than your feathered foes? 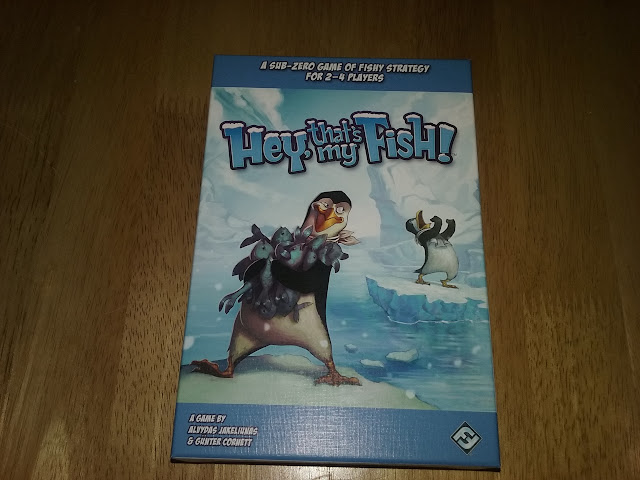 Since Hey, That’s My Fish! was originally published in 2003, it has become widely popular as an engrossing and strategic board game for casual family and tactical play, and it was even recommended in 2006 for the Spiel des Jahres award. Now, Fantasy Flight Games is proud to publish this definitive edition of the game, which includes a new box, new penguin miniatures, and new artwork. 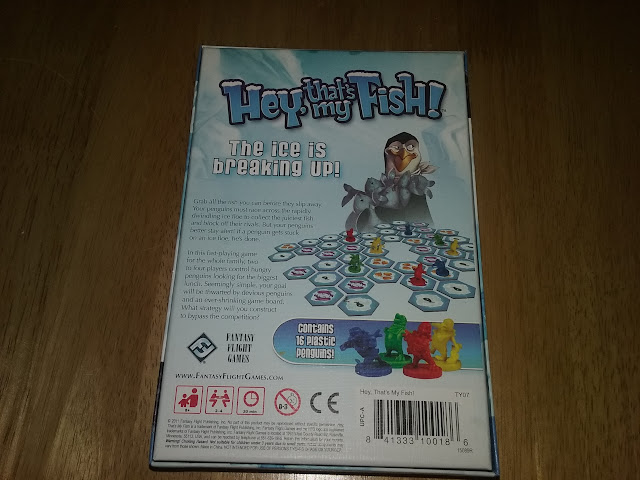 I enjoyed the artwork on the front, especially the raging penguin, and the back is clear and concise as well.  We know its going to be good quality coming from Fantasy flight Games, but is the game itself good? 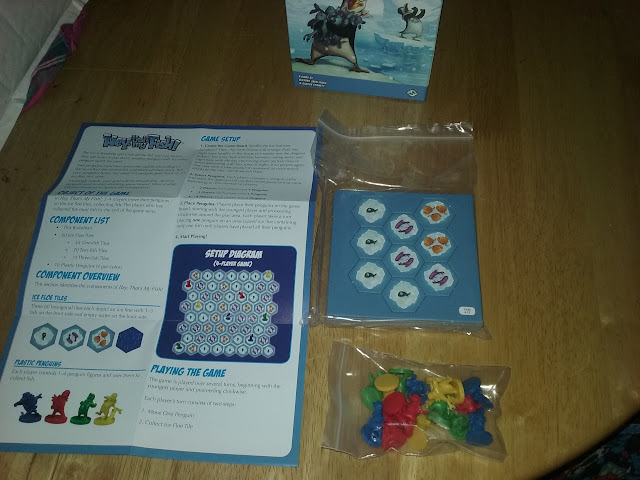 In the box you get a double sided rules sheet, the rules are very simple so its all you need, a slab of Ice Flow tokens on nice high quality card stock to punch out, and a bag of penguins. 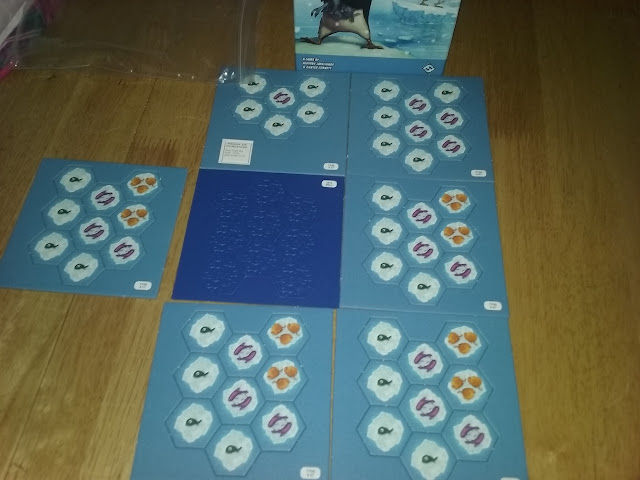 The Icefloes have either 1, 2 or 3 fish on them, the art is simple but nicely done to make it easy to see and differentiate them.  Like all FFG its high quality card stock.  Once punched out you can pop them bag in the close top baggie they came in to keep them together. 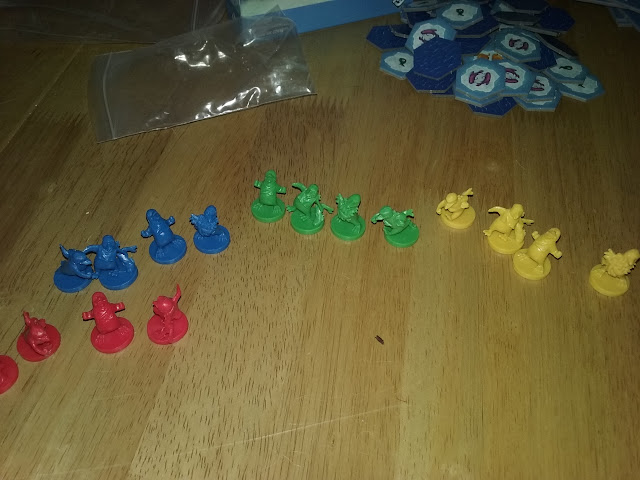 Then we have 4 teams of 4 penguins, The game is designed for 2-4 players so you each have a coloured team, all in a nice hard plastic, they don't bend, and are solid. 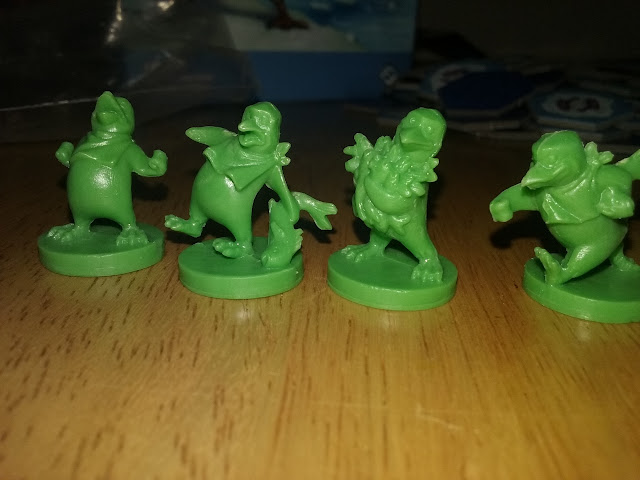 Each colour have 4 different poses of penguin including the two from the artwork on the front, which I like a lot.  All the other coloured teams have the same 4 poses, but they are characterful, well done and I enjoy them so I don't mind. 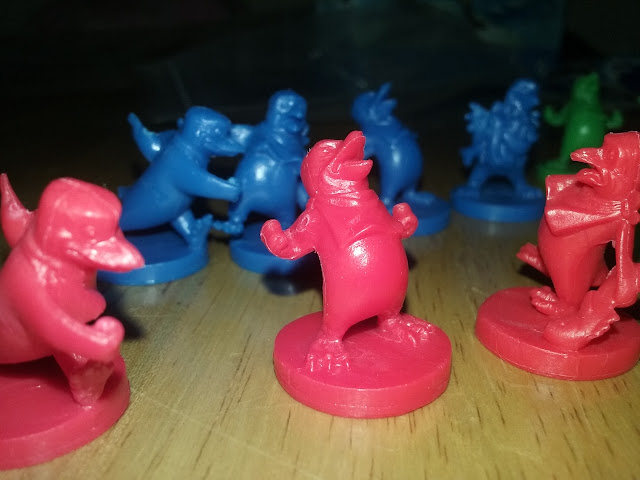 The idea of the game is simple, end up with as many fish as you can at the end of the game. 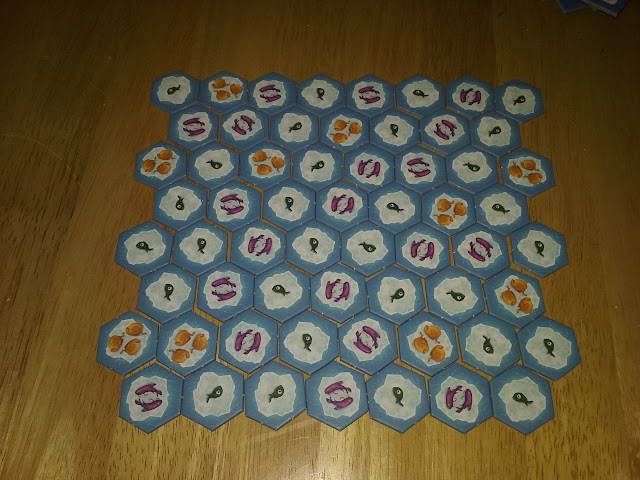 To set the game up, you assemble your tiles in rows as above alternating between 8 tiles, and 7 tiles, in any way you like with the distributions of fish, though its nice to draw them face down as we did so you end up random.  Once the board has been set up, you take your penguins and place each of them on a tile with only 1 fish on it.  You can not have more then one penguin on the same tile.

Then you take turns moving any one of your penguins.  You can move them in a straight line on any access of the hexagon but can not cross over another penguin.  When you have moved you take the tile you started on and put it in front of you.  To gain the most fish you want to be trying to end your move on a 2 or 3 fish tile, so next turn you can move and claim it for yourself.  As you claim tiles it starts making holes in the board, forcing other players to go around them, or become stranded. 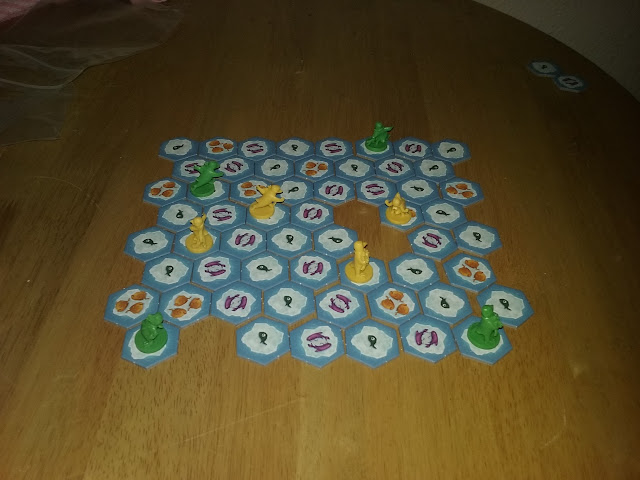 Early game things are nice and simple, Olivia and me where happily just chipping away gathering fish. 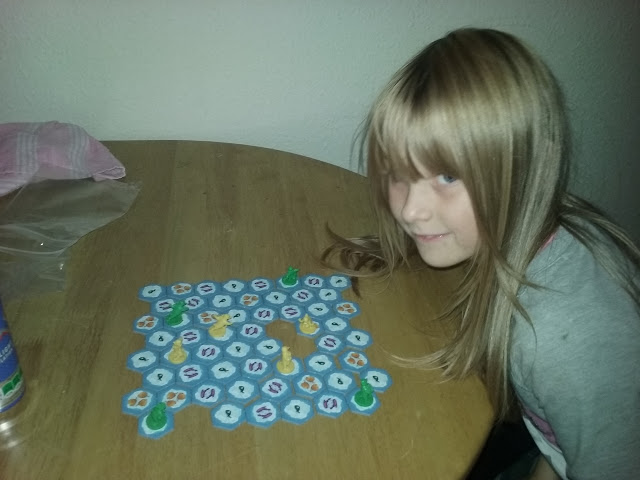 The age suggested on the box is subjective I have found, as Olivia (6 years old) had the game figured out in minutes, though of course the older you are the more devious in strategy you may be! 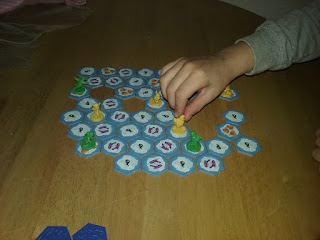 Things started getting a bit more challenging when holes and gaps opened up, when there are thin chains of tiles together you have to be careful or you get up getting yourself stuck and having that penguin sit out the game with nothing to do, as you can not move across gaps, only around them, and of course if there is no way around you have to sit there till the end of the game, which is why its a good thing in 1 2 player game you each have 4 penguins.  The numbers of penguins do drop depending on number of players to keep it from getting overcrowded. 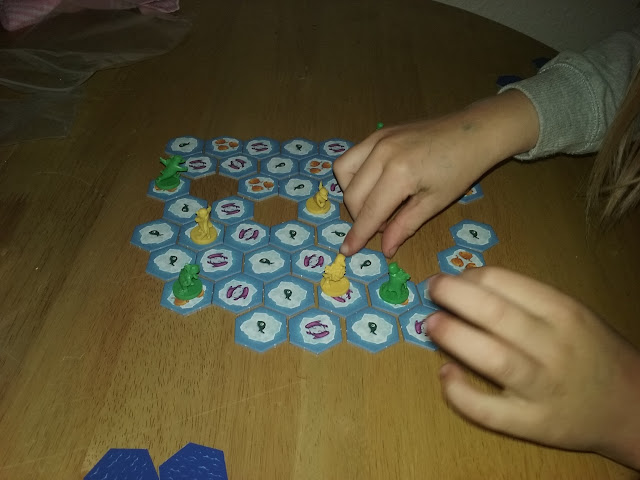 Olivia is planning her moves to get the most fish..... or is it to try and cut off my green penguins? 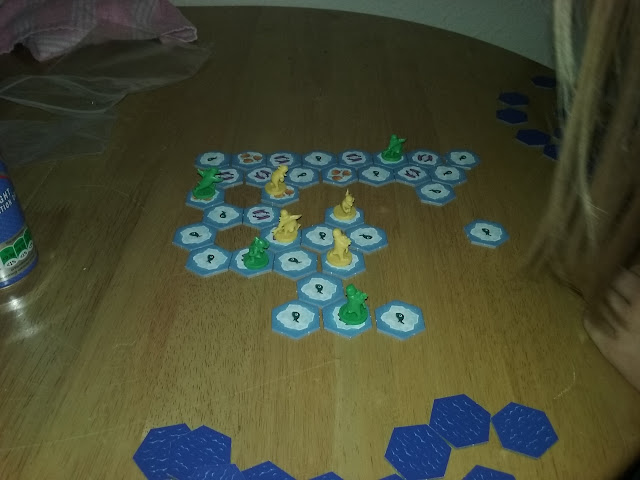 Looks like it was to try and cut off my penguins! 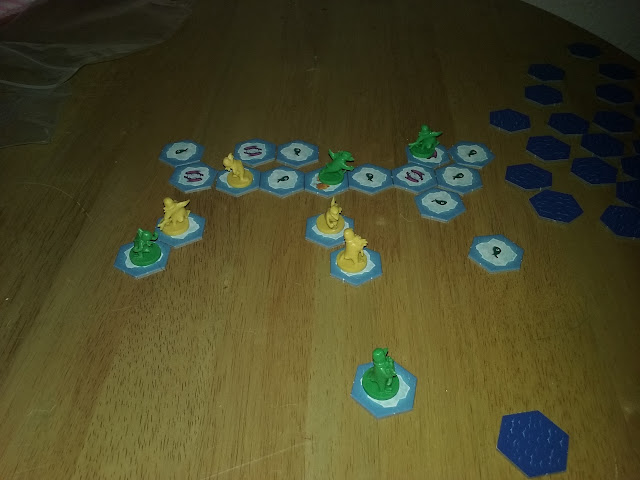 Nearing the end game we both have penguins trapped out on the ice floes, whilst our last few try to grab the most fish possible from the diminishing supply. 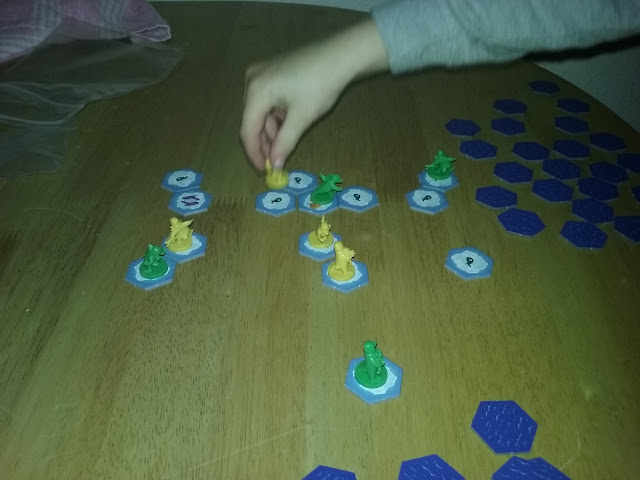 The last few moves ends with all of cut off.  The game ends when no penguin is able to make a legal move, so you can cut your opponents off early, if you are lucky and sneaky, then munch the board away yourself. 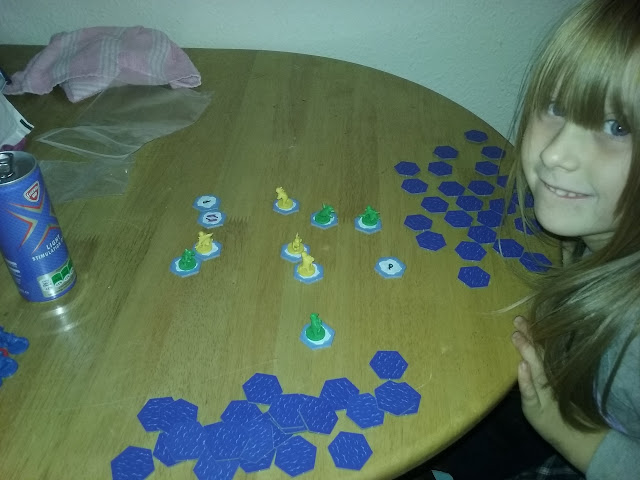 At the end neither of us could move our penguins, so we counted up all the fish on our tiles and it ended up 47-42 to me.  Not often I win, but Olivia wanted to play again so we jumped into another game, and that's another story.  It plays quite fast, is simple to set up and take down, and takes up very little space to store.
﻿
So, What did I make of it, well I went it thinking, this is a simple game, with few rules, should be easy to play and teach, which it is, but when playing I found a surprising depth of tactics and strategy, trying to block off your opponents, thinking ahead so you do not get yourself trapped, sometimes going straight for the big fish leaves you in a worse position so you need to think about your moves, plan ahead and be prepared  for what your opponent may do.  I really enjoyed playing it, Olivia really enjoyed it, and its not just a kids game, do not let the cute art style fool you, there are plenty of tactics to employ playing this, and with other adults it got a bit cut throat, with my friends gleefully trying to cut each other off on the ice.  With the price of some board games today, you cant go wrong with this, the whole family and adults will love it, easy to teach and great fun to play.  The RRP of the game is £9.99 you can get it here here, or pick it up in your local Waterstones.
Labels: family games Fantasy Flight Games review