Munchkin, apparently it comes in many varieties, but I have never played it until now.  And that is due to Adventure Time Munchkin!  I mean I Love Adventure time, Olivia loves Adventure Time, seems like a good match!  The basic theme of the game is a dungeon romp equipping gear, slaying monster and looting treasure, which sounds a perfect fit for the Adventure Time world. 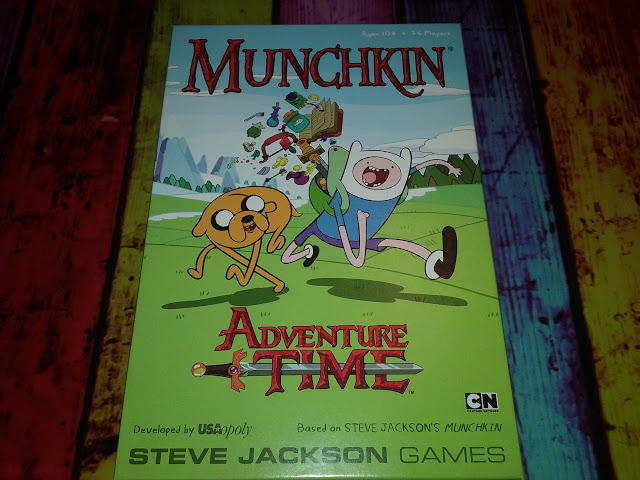 I love the box artwork for this game, it really fits the theme of both Adventure Time and Munchkin 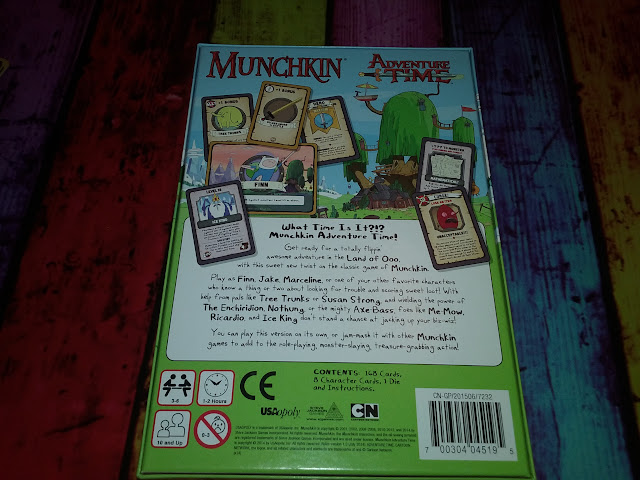 The back advises 3-4 players, we have played it 3 players, and 2 as well which does work if you want a more co-operative feel which was nice to teach Olivia how it works. it played fine that way, though its most fun when its at its cut throat best. 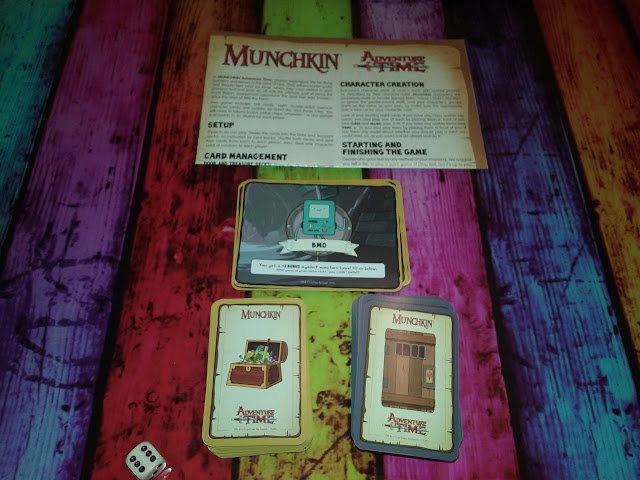 Inside you get a fold out instructions sheet on how to play, a set of large character cards, a treasure deck, a dungeon deck and a d6.  The cards are nice quality with great art on them. 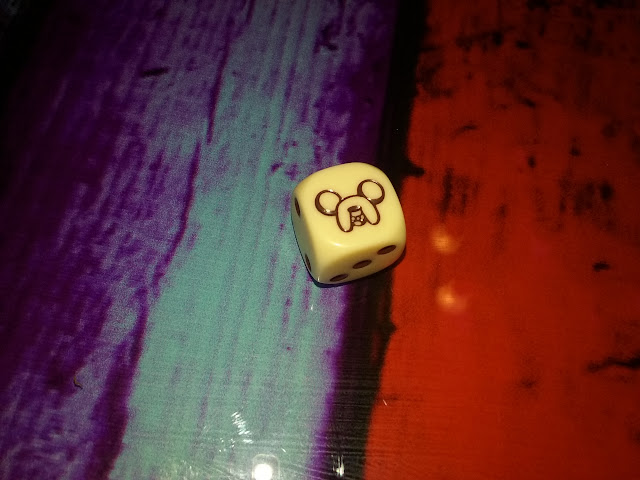 Special mention goes to the D6 as it has Jakes face as the number 1. I loved that, Olivia loved that and tried to "borrow" the dice. ...... 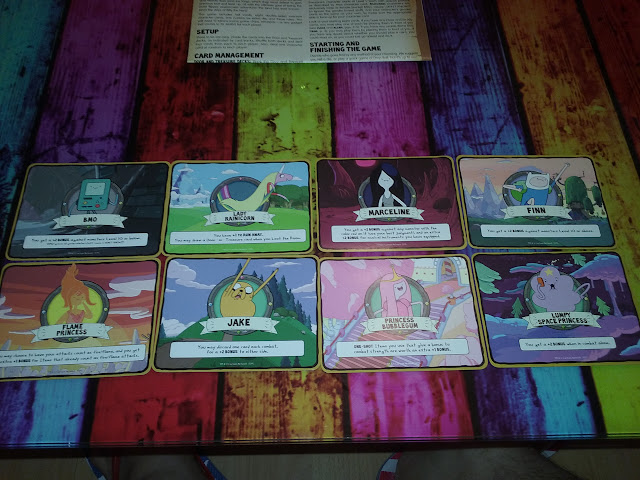 You can either randomly deal character cards, or pick them yourself.  Olivia likes to pick as she is usually her favourite Princess Bubblegum, and I am usually Jake the dog, or BMO, or Finn the Human, I like them all!  They all have a special ability that will make gameplay different each time, so its worth trying other characters. 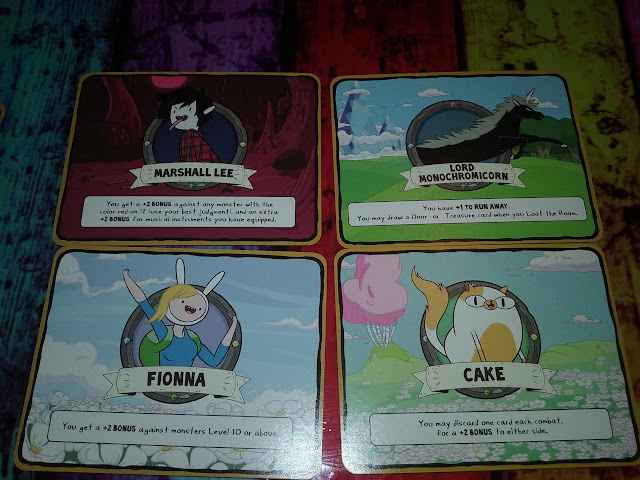 They are double sided with the opposite gender on the back, as sometimes you have to switch in game! 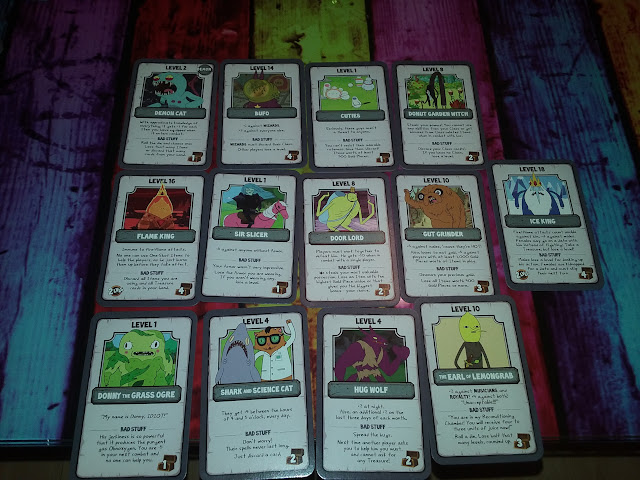 An example of some of the monster cards you fight, its got a wide range from the show, including some favouites like Lemongrab, and Ice King. 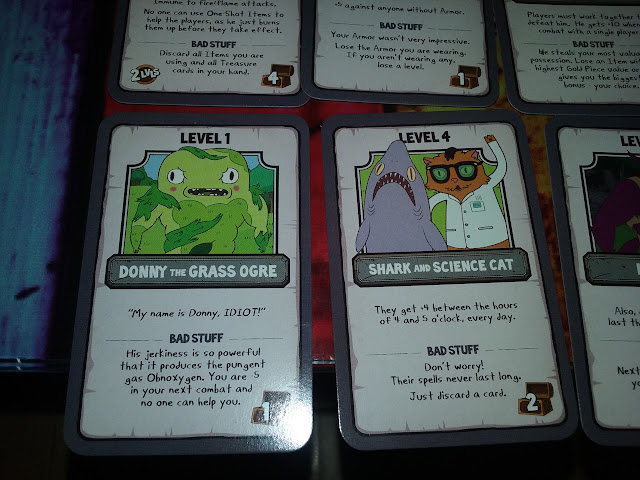 Also Shark and science cat, these cards have great references to episodes, and things you follow, for example it says they get a plus 4 between 4 and 5 o'clock, whcihc as fans know is when they turn up every day to fight Finn.  Its just a nice touch to draw them and have to check your watch to see if they get that bonus. Each monster always has the bad stuff section as well if you cant beat them and have to run away. 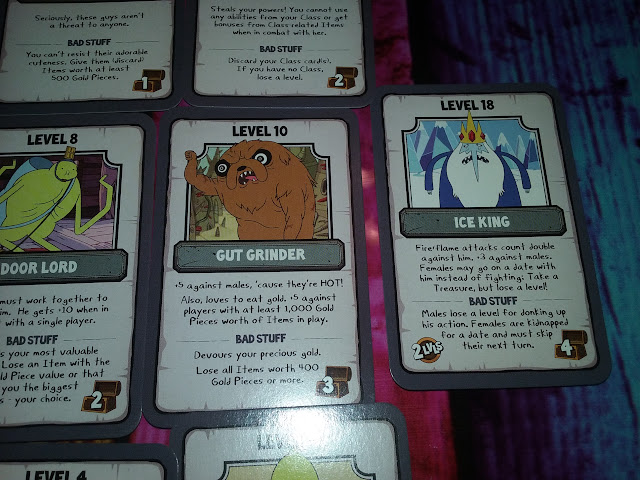 Ice Kings bad stuff is great and so in theme with the show, males loose a level (the goal is to get to level 10 so that hurts) but females get kidnapped and miss their next turn as he does love kidnapping princesses.  All the cards in the "door" deck have a grey border so they are easy to distinguish which deck they go in. 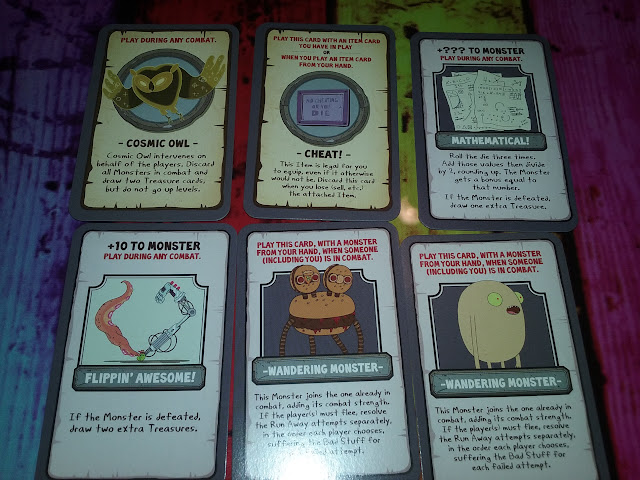 You can also get cards to pop in your hand and play later on.
Gameplay works, in its basics by kicking in doors, fighting monsters, and grabbing treasure in the race to be the first player to reach Level 10  check out an online demo of Munchkin  here

If the player did not find a monster in the room, then the player can choose to either draw another Door card face down (looting the room) or fight a monster from his hand (looking for trouble).
To prevent opponents from achieving the winning level , players can give enhancing cards  to whatever monsters are fighting the other player so that the monsters will win and cause the player to have to try to Run Away from the monsters and maybe have to suffer "Bad Stuff" from the monsters, or throw curses on each other (or have them happen randomly).  Players can also use items against each other to delay their win.

You can help each other defeat monsters, adding together their level and bonuses to beat the monsters. The player who helps the other player can negotiate a deal to receive some of the Treasure cards earned by defeating the monster, or some other advantageous trade, but the helper never gets a Level for helping without playing a card or using an ability that allows it

Players can gain extra abilities or advantages by getting "Class" cards with a few examples shown below. 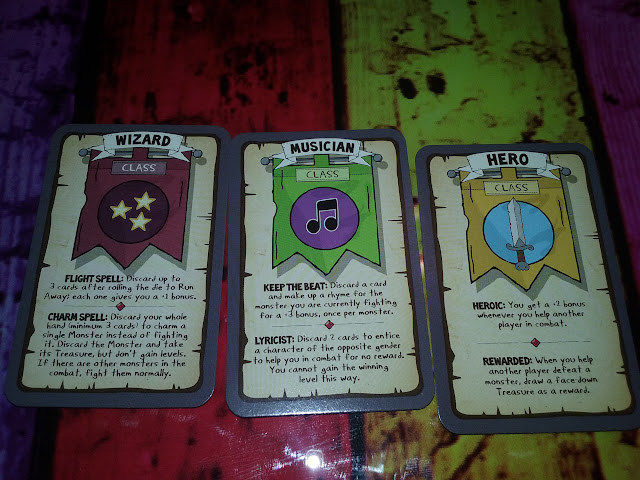 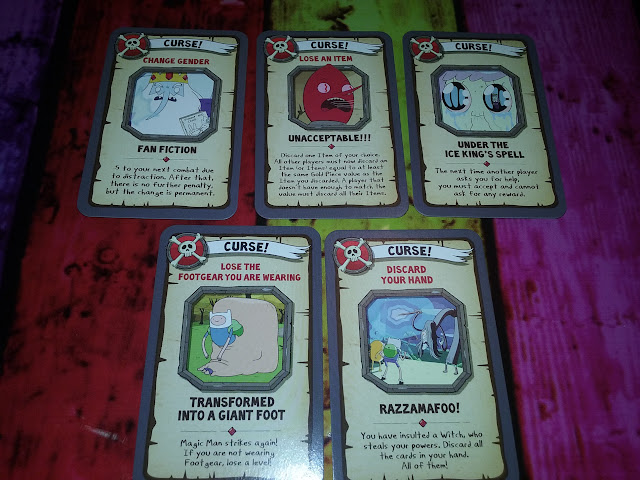 The curses are all thematic with again great art, and show references on them.  You don't have to have seen the show to enjoy it, but it adds a nice touch, and you can see the effort the creators have gone through to match things in and tie it up to the show. 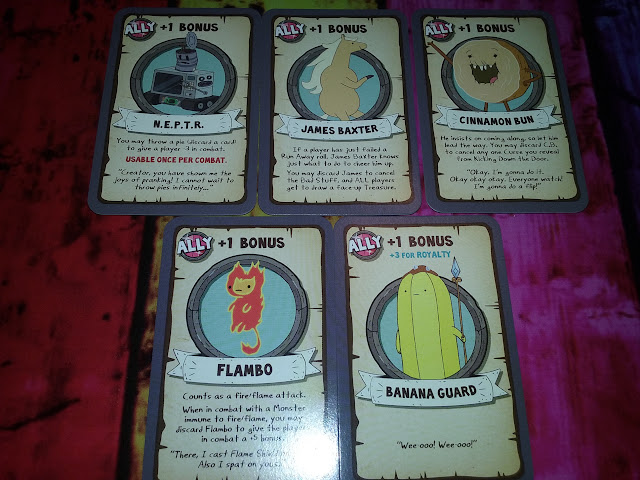 You can add allies that add a bonus to your score, like the Banana Guard, and my Favourite Flambo just for his quote "There I cast flame shield on yous, also I spat on yous" all full of great art and character. 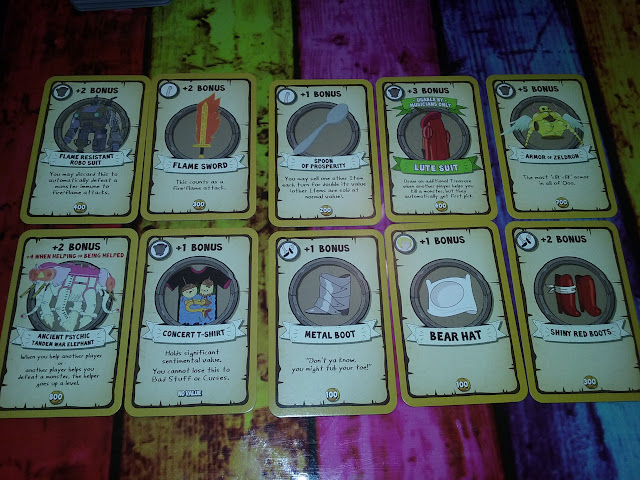 You get a mix of items you can equip to increase your power against monsters, often with fun quotes.  Players can Sell one or more of their items to gain a level. Each item card has a value saying how much gold the item is worth. If the combined value is greater than or equal to 1000 gold pieces, then the items can be sold to gain a level. Since the game has no other way to represent money, players cannot get "change." However, a player can buy more than one level, at a cost of 1000 gold pieces per level. Players cannot achieve the winning level by selling items, however, nor can they sell Items and not take a level if the next level is one that has to be earned by killing a monster 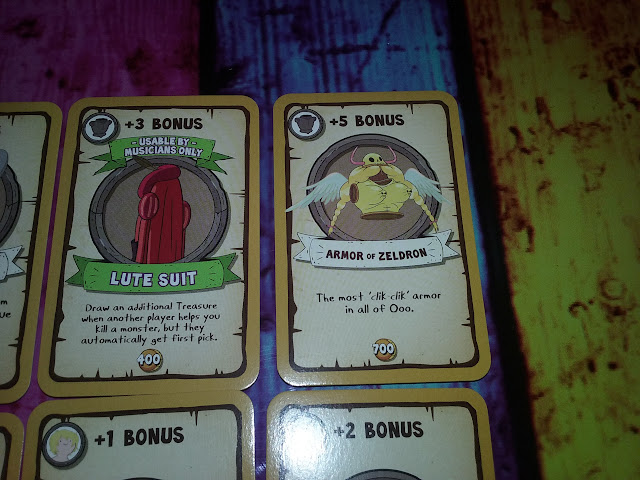 the Armor of Zeldron,  BEAST of an item, and a good episode too, 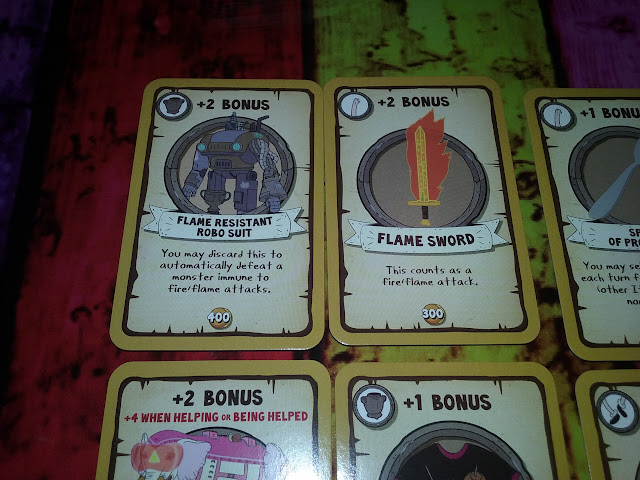 Some items as above have an ability you can use as well as their bonus. 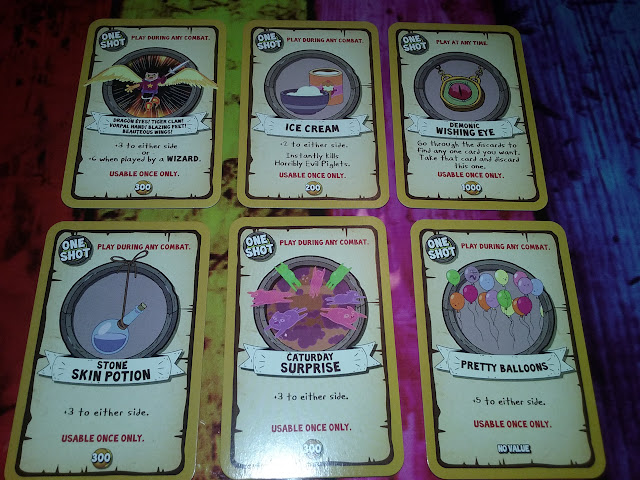 You also have one shot items that add bonuses usually to either side, so you can either look to win, or push the monster to beat your fellow player. 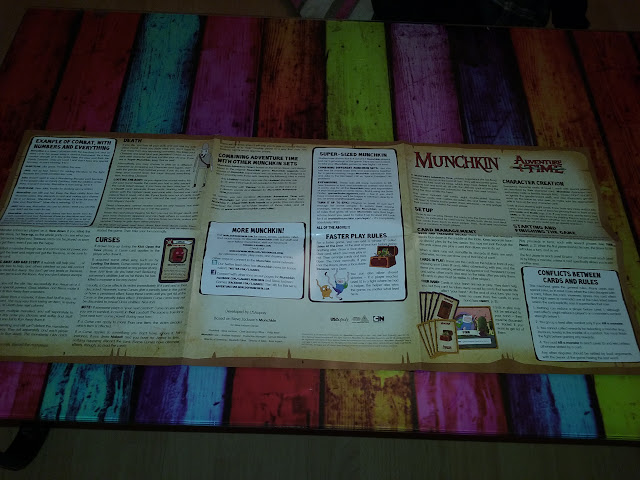 the rules page folds out to be a surprisingly large double side read, but it is not massively complicated to play, though it is very light hearted and messing with your opponents is positively encouraged. 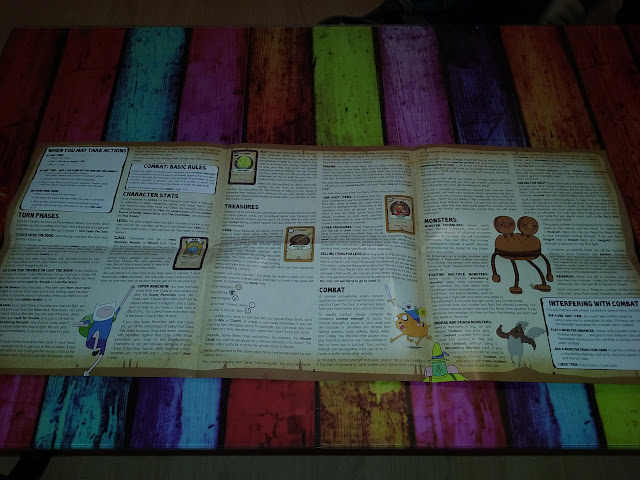 Winning the game requires getting to Level 10Players can get levels by killing Monsters, selling Items (as described above) or playing cards that let a player go up a level). With few exceptions, the only way to get the winning level is to kill a Monster. Exceptions to that rule usually come in the form of cards which specifically state they break the rule, and cards always trump the main rules. 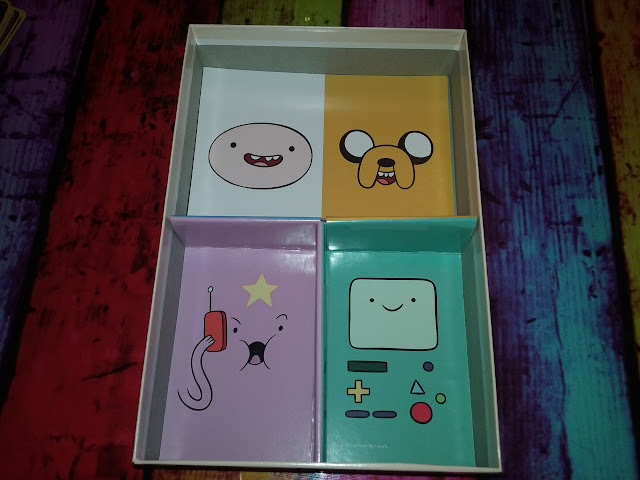 I love the detail, even inside the box with nice dividers to fit everything back in and awesome art. 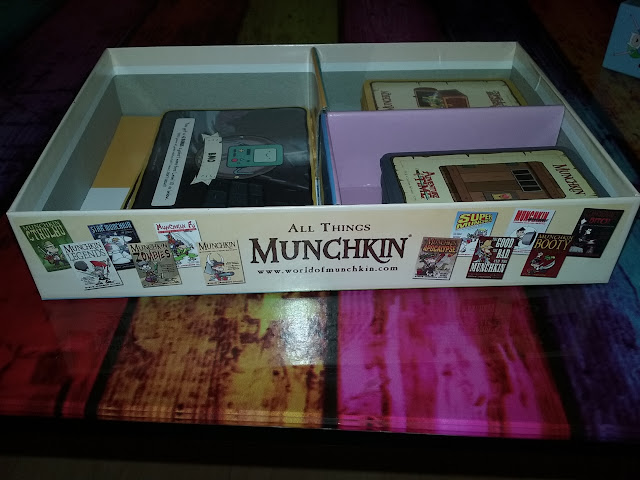 The side of the box shows all the other Munchkin variants available, and you can mix and match them into other sets. 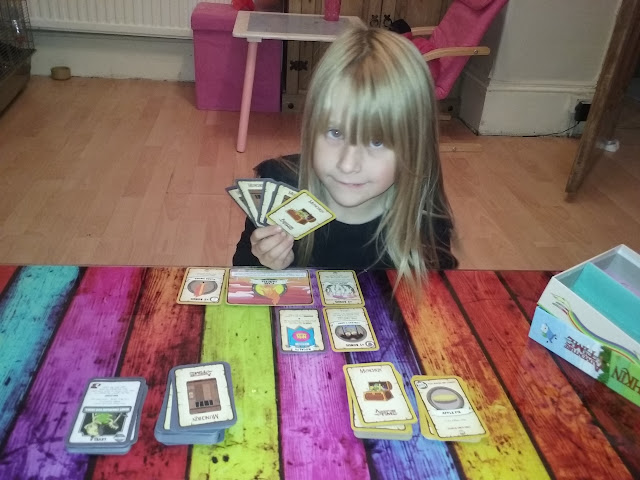 Olivia and Flame Princesses are planning their next Move 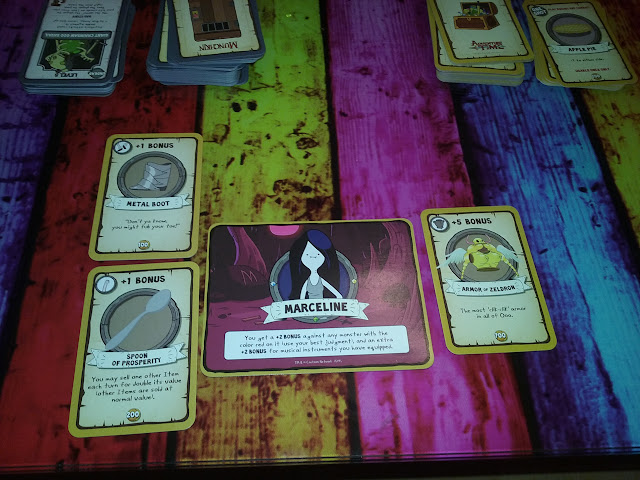 Marceline is nicely tooled up to kick but! even more if the monster has red on them. 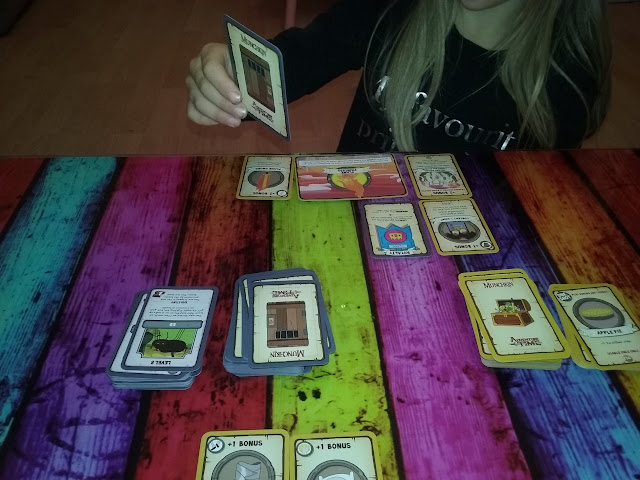 Olivia kicks in the door, drawing a card from the door deck. 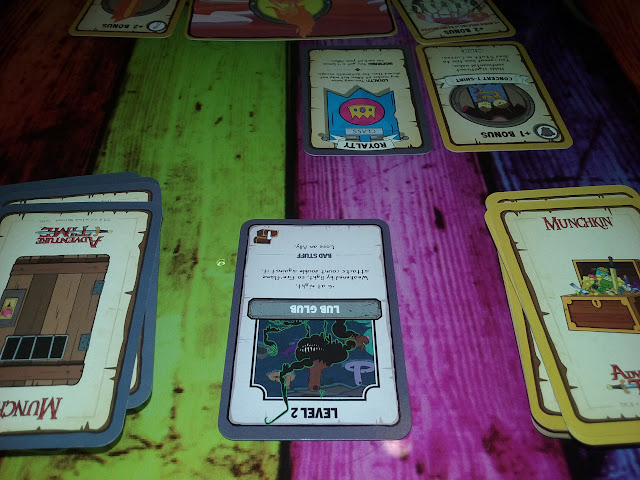 she draws Lub glub who is level two, he gets a bonus at night, lucky we played in the morning.  Olivia is level 2, and with her item bonuses adds up to 6 so she wins. 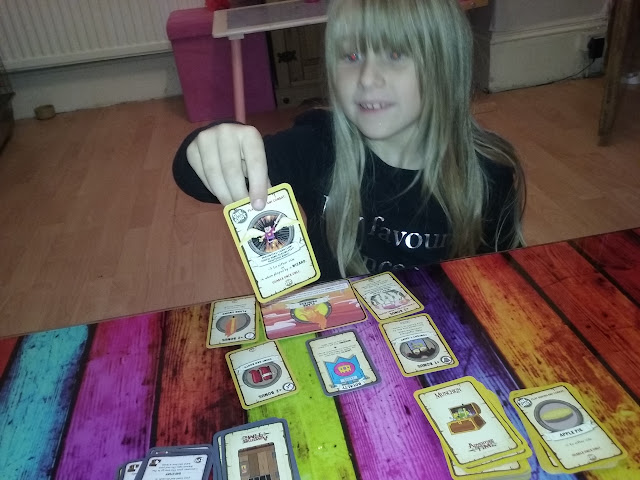 and draws a treasure card to keep for later.  She did on occasion have to ask me to hep her read some of the more lengthy cards. 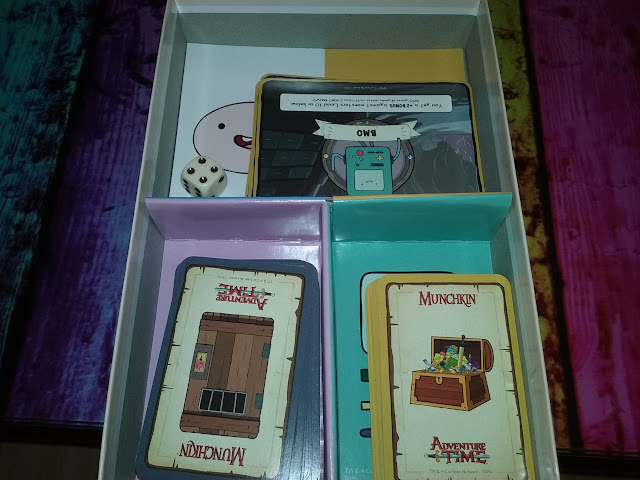 Everything packs up nicely when you are done.

Its a great fun game with an awesome theme, nice art work, high replay factor, and can be enjoyed by most ages.  It can also be arguably ( my excuse to play it lots) help Olivia with her Maths as she adds up all her item bonuses.

Played with a bunch of friends, this gets cut throat, and competitive people (like the wife) can get brutal with it, promises will be made and broken, deals offered, bribes thrown, all sorts of treachery and glory will await.

If you have not played munchkin before, give it a try, we had great fun with it, if you are an Adventure time fan you NEED this, just for flicking through the cards alone, let alone the great game its packed with.

Its RRP is £19.99  take a look here to find your local store and take an adventure to get yourself a copy, or head into your local Watertones and you can grab one there as well.