Time to take a look at a card game today, its Adventure Time Fluxx.  Fluxx is a simple concept, It all begins with one basic rule: Draw one card, Play one card. You start the game with a hand of three cards... add the card you drew to your hand, and then choose one card to play, following the directions written on your chosen card. As cards are drawn and played from the deck, the rules of the game change from how many cards are drawn, played or even how many cards you can hold at the end of your turn.  There are several other variants of the Fluxx game, but never having played them we are just going to concentrate on this one, the Adventure Time edition. 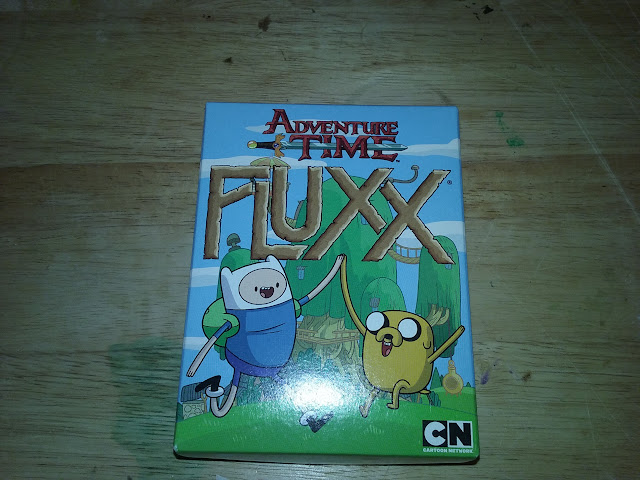 Comes in a small box fully licensed with a great colourful eye catching cover.  Olivia and I are huge fans of Adventure time the cartoon show, its full of humour for Adults and children alike, so the fact this is Adventure Time is what caught our interest. 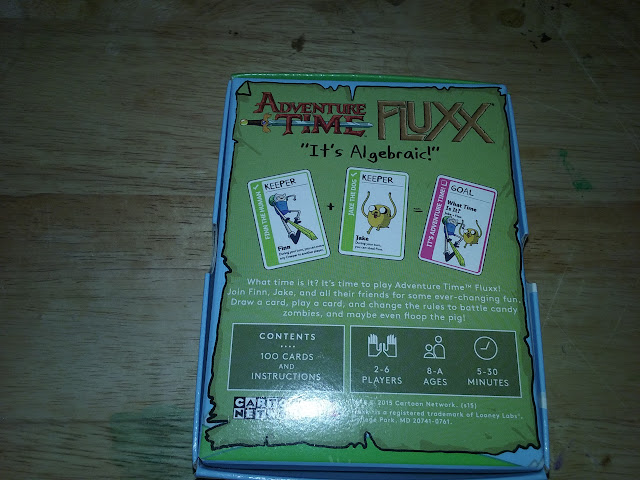 The back of the box states its suitable from 2-6 players, we have played it 2 player and 3 player and it works perfectly well for both of those, so I think would work just as well for more.  The time limit seems about right we had games go from about 10-20 minutes on average but with more players I could see it potentially reaching 30, it all depends on what rules cards you draw.
So lets open her up, see what you get and look at how it plays..... 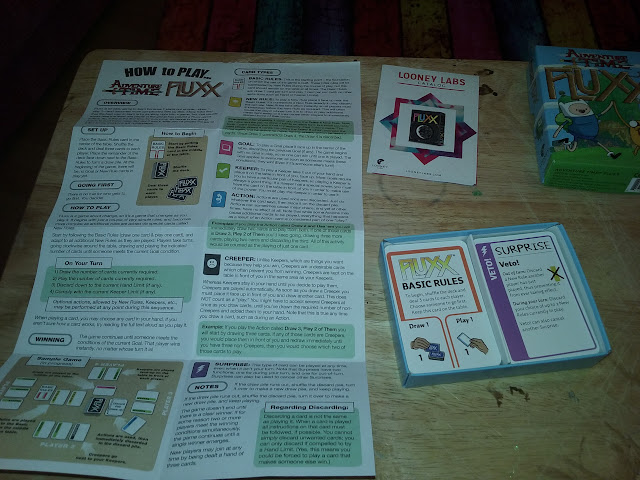 So inside the box you don't get much, you don't need much to play this, which is a good thing as it makes it nice and easily portable.  You get the cards, a how to play sheet with a handy FAQ on the back and a little leaflet showing some of the other Fluxx products available. 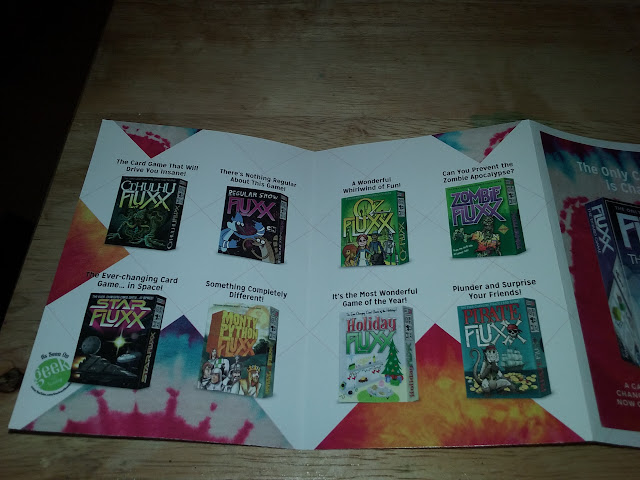 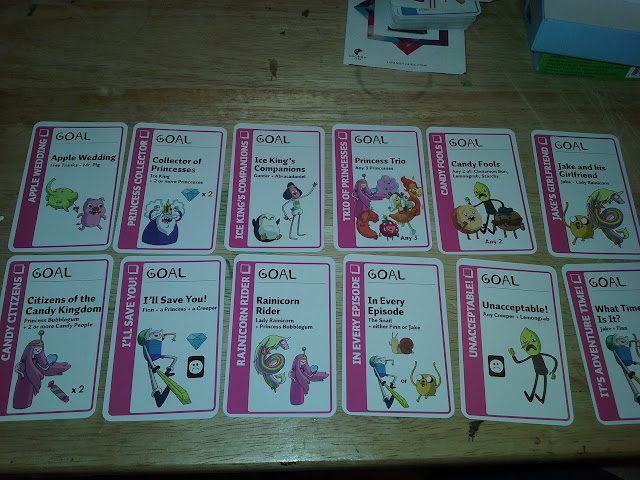 There are several different kinds of card in the deck, above we see the goals, these are what you are aiming for. You draw these and can play them changing the goal, and the winner is the first to fulfil them, all with little inside comments for fans of Adventure Time.  For example if the goal is Princess Trio the winner is any player with any 3 princess keeper cards in front of them, or Rainicorn Rider is Princess Bubblegum and Lady Rainicorn, all with great art straight from the cartoon. 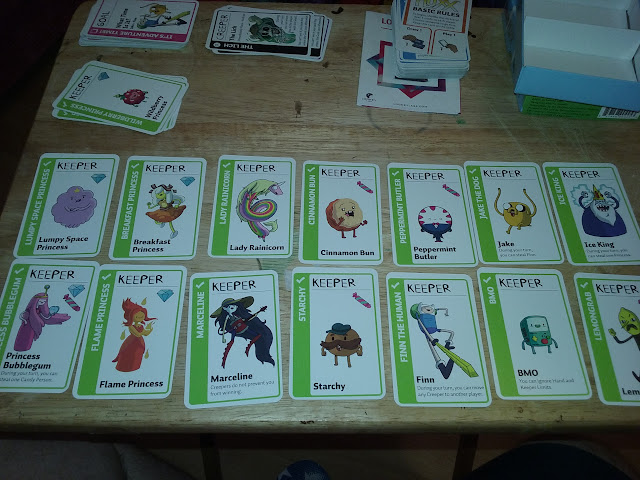 These are the keeper cards,  each featuring a character form the show, Starchy, Finn, Marceline, and plenty of others, some have their own mini rules on them as well.  These you play in front of you to help reach the current goal card. 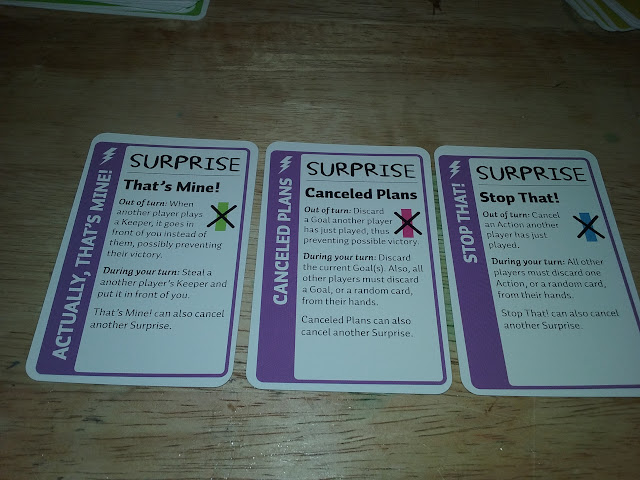 There are surprise cards that can change things up a bit, they can be played at any time, even not your turn to help you give an advantage to yourself, or just mess with your opponents. 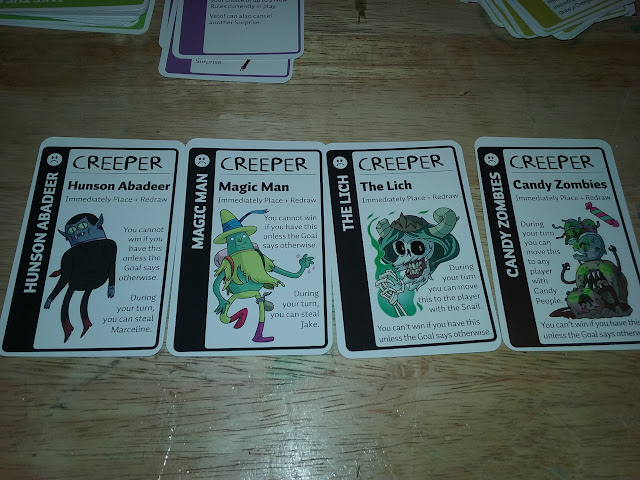 Creeper cards are bad news!, as soon as you draw one you have to play it down in front of you, and these are never good, they explain the effects they have on the car and feature villains from the show and they usually stop you from winning, though you can have cards that shift these onto other players 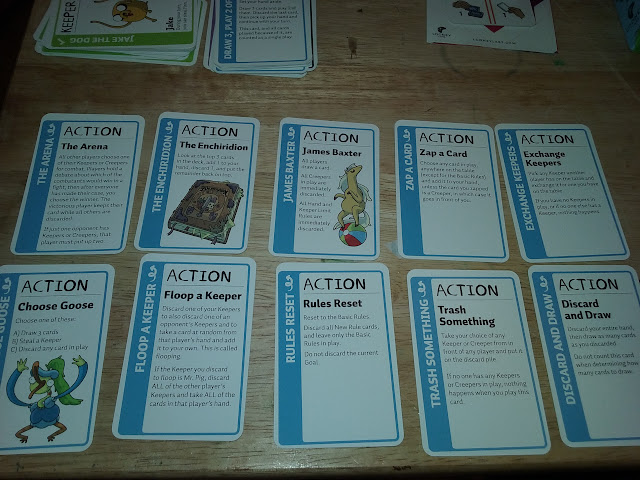 There are Action cards, these explain what you do on the card, and can be played to help you out, or hinder an opponent, the good thing is that all the rules are on the card, so you do not need to be flicking back and forth to the rules leaflet.  These mix things up nicely. 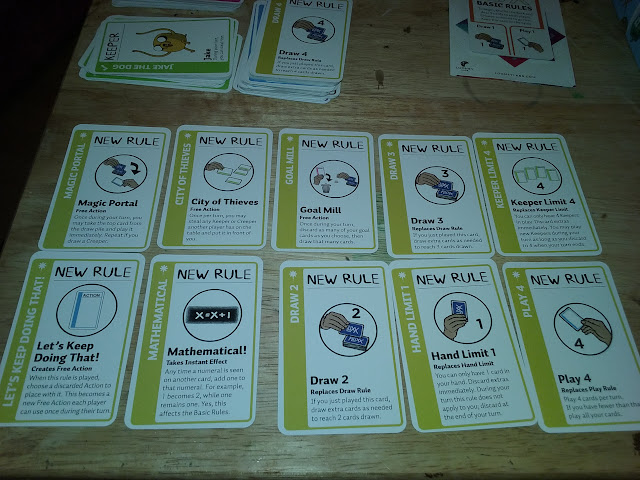 The last card type we have are the rules cards, these provide new rules to the game so keep it in a constant change of flux (see what I did there) all the time, meaning no two games are ever the same as the game rules evolve and change during play. 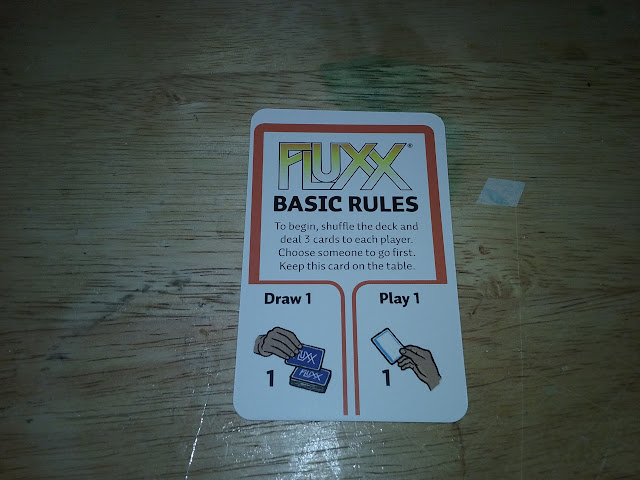 Lastly we have the basic rules card, this goes down on the centre of the table during play so you can add draw and play rules cards as they are played from your hand to keep you aware of whats going on. 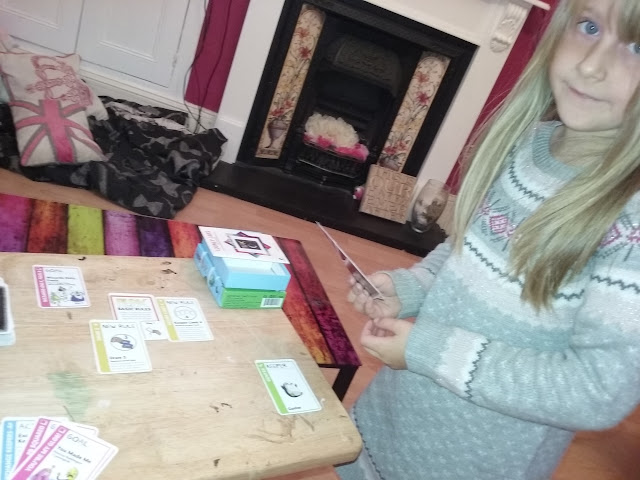 A quick game in action with Olivia and me, it took no convincing for her to try this with me as it was adventure time, she is 6 and can play it fine, the only thing she needed help with was some of the wording on the cards, but if you take that into account, younger players can enjoy it, and if they are Adventure Time fans they will love it! 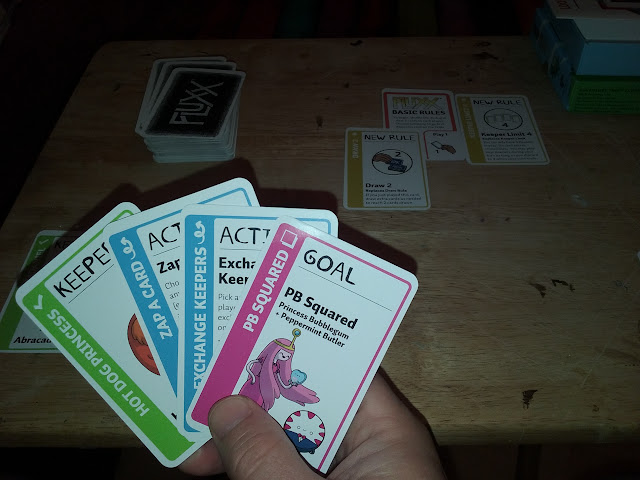 As you can see above we have two new rules in play, a limit of keeper cards, and a draw two cards instead of 1 per turn, after much playing the goal was set down by Olivia.... 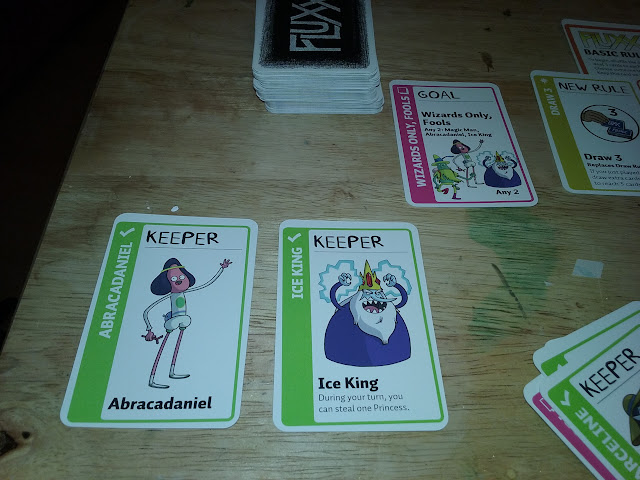 And I snuck a win with the goal "wizards only, Fools" when I played the Keepers Abracadaniel, and Ice King.  You can easily see his ability when in play that you can steal a princess from one of your opponents each turn.  I got the goal first so I won.  We played a good few other games, and it changed so fast that every goal was different and the play was simple, fun, but you still had to think to aim towards your goal, or when to play down the action cards for the right effect.
Its a great game, suitable for all ages, another one your gaming group will enjoy as a solid filler or mini styled game, they will LOVE it if they are Adventure Time fans.  Its good for Family fun as well, takes seconds to teach, and does not out stay its welcome on the table.
It can be combined with other Fluxx sets to ramp up the craziness should you desire, so there is inbuilt expansion ability with the game to provide even more variety.
﻿
﻿
Its RRP is £14.99 so head here to find your local store and go and grab it, you need this game like Ice King needs princesses! For non Adventure Time fans, its still a fantastic fun purchase to introduce you to the world of Fluxx, as you do not need a familiarity with the show to understand it or enjoy it, but if you play this and haven't seen it, I am sure you will want to!
﻿
Labels: Adventure Time Fluxx