Skip to main content
Labels
Posted by Unknown May 12, 2016

My introduction to Dice Masters happened with the first Dungeons and Dragons starter set Battle for Faerun, and I was hooked, to the point where I looked at the super hero sets normally not having been a fan of superhero's but again being converted by the likes of the DC War of Light set featuring the Lantern corp, The Amazing Spiderman, or DCs Worlds Finest with the likes of Batman and Superman in them.  The fact all of these sets can battle against each other is fantastic, have a look at a battle report of The Amazing Spiderman set vs Dungeons and Dragons Battle for Faerun.
The game is fun, simple to play, plays fast, and is easily transportable and with so many sets and boosters available has almost limitless deck building options with a theme to suit everyone.

With this new release of a Dice Masters set that delves into the world of Dungeons and Dragons again I was pretty excited to see what it contains, and to see how Wizkids success with the other sets each improving in quality have been implemented here. 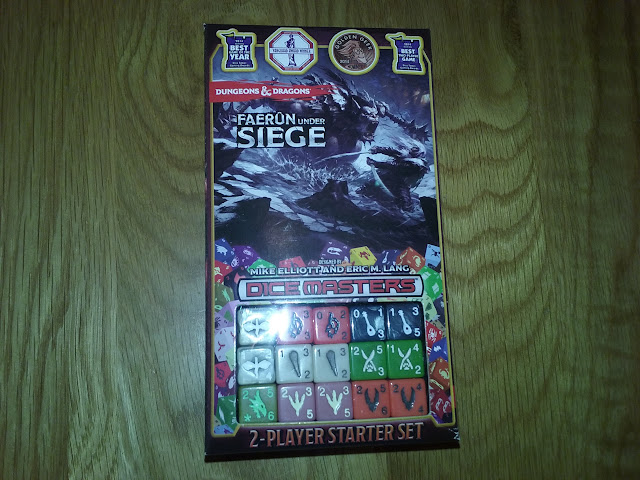 I love the cover art, suitably dark, with a huge monster and a hero, exactly what you want. 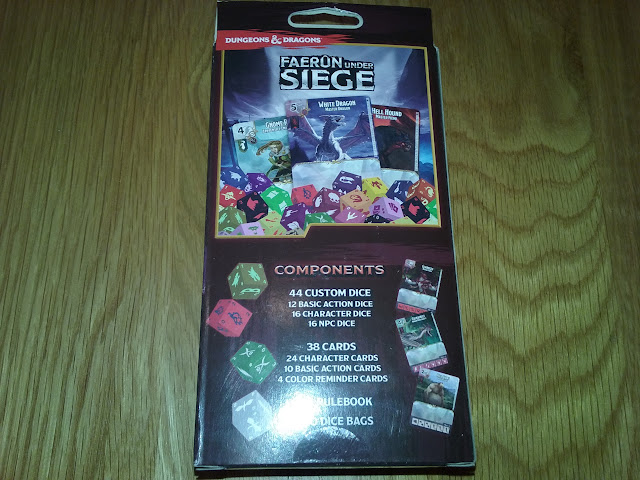 The back gives you a little overview of the contents, but we will be going over them. So lets see what's in the box and how these cards stack up....... 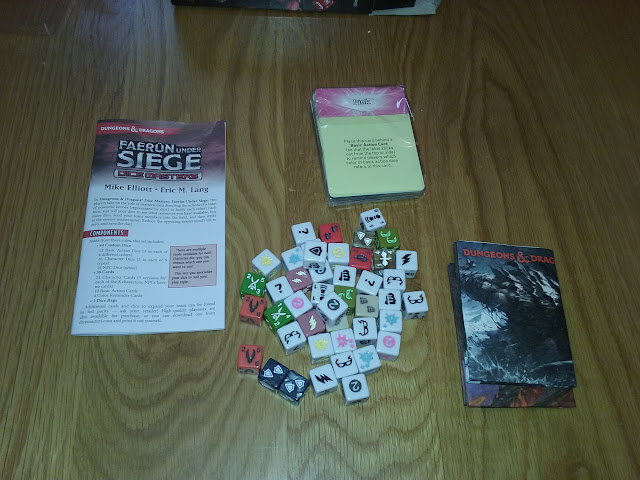 like all the sets you get a full colour rulebook so you can play, a pack of the cards, 2 dice bags and a big old pile of dice. 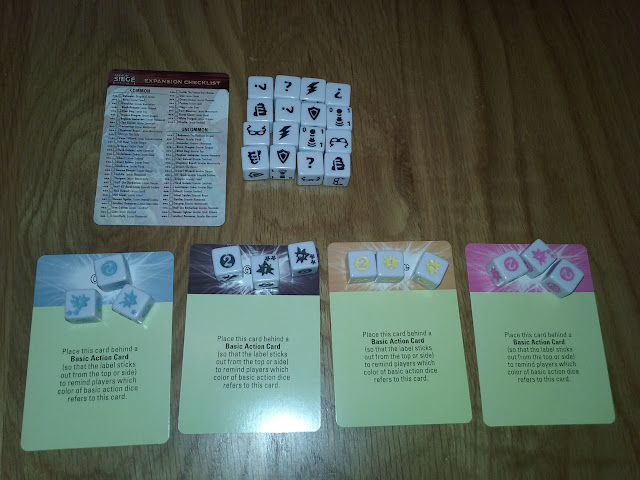 you get enough sidekick dice for the mandatory 8 per player, and four different basic action coloured dice and cards.  You also get a little checklist of all the cards that will be available in sets that you can pick up in boosters. 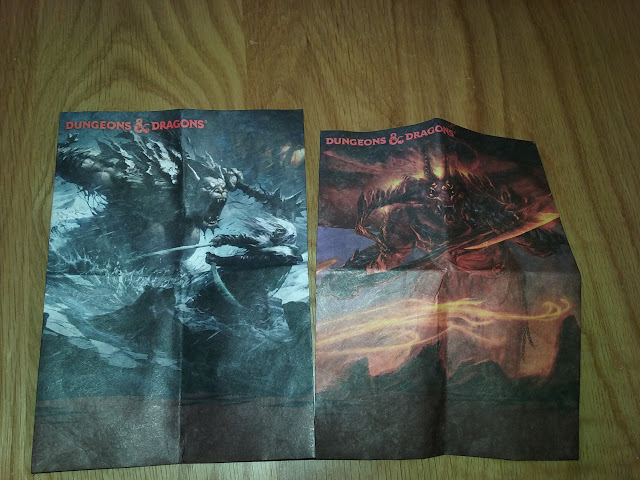 One of my issues I have had, is that in the original set the dice bags where blue and red, and as sets have come on to the marvel and DC ones there has been some amazing full art bags and I always wanted some for D&D. Well that's now fixed with two awesome looking dice bags, they did not need to do them full colour art like this, but they look great and really add to the quality feel of the set. 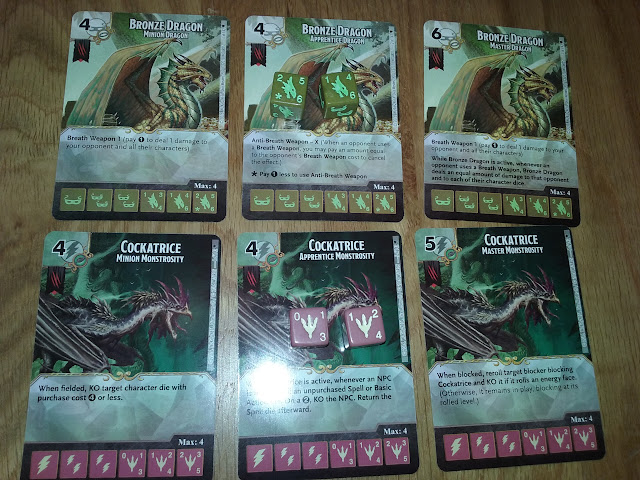 You get 8 character/monster/beast/thingy ma-jobbie tentacle monster cards.  And each of those have 3 different variants, which may have differing abilities and costs providing you more options for tailoring your list to your choice of play style.  Each character/monster/beast/thingy ma-jobbie tentacle monster has 2 dice in the set that you can then purchase in game for energy costs to field your force.

Bronze dragon is a solid "good" alignment card, with a breath weapon to cause damage to your opponent and comes in at a nice 4, or you can go up to 6 cost for more abilities.
Cockatrice is high defence neutral card that's abilities that can either knock out characters when fielded (very unpleasant) or force rerolls of your opponents dice. 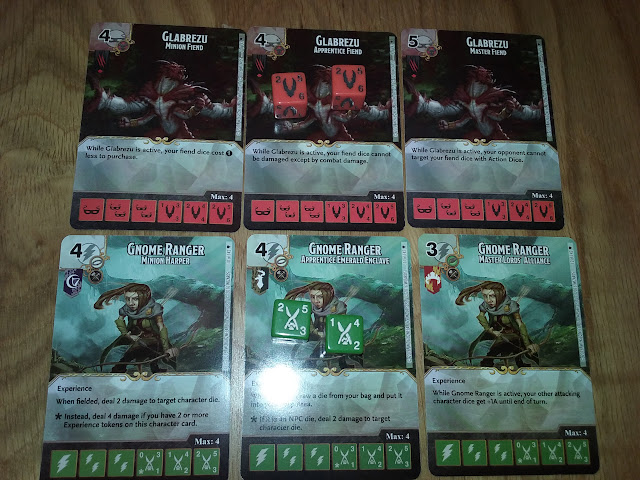 Glabrezu is our first Evil alignment card of the pack, and can boost other Fiends in differing ways whilst having good combat stats
Gnome Ranger is good with one neutral version and has experience making her more powerful for each monster she kills, and has some varying abilities to deal damage to your enemy when fielded, or pull more dice dependant on the one picked, I am rather partial to the minion harper version. 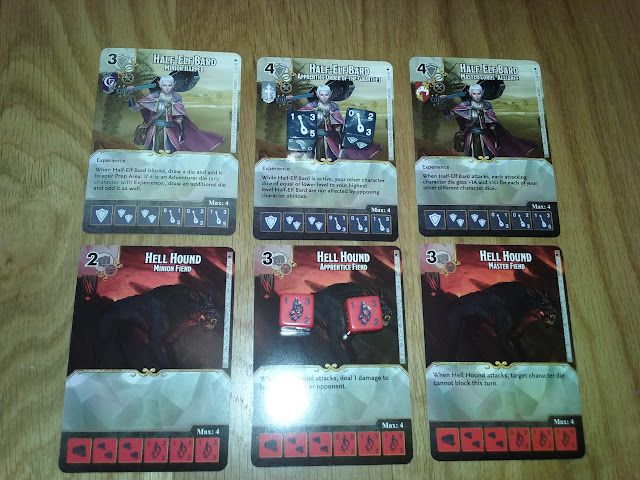 Half Elf Bard has expeirnece and can buff other characters.  Hell Hound Is a cheap good dice to get out, and the apprentice fiend version causes a damage when he attacks as well, so for 3 energy hes a bargain.  The art on these cards are just amazing. 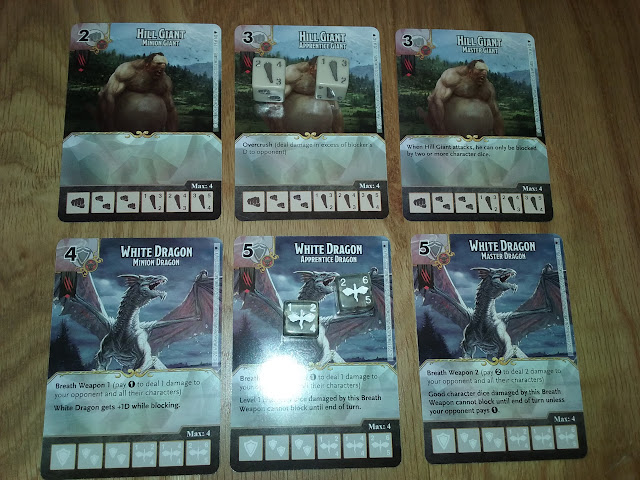 The Hill gianrt is another cheap character but with options for overcrush to power his high damage through blocking, or having to use two blockers against him he can not be ignored.
The Final card is the white dragon, this has my favourite artwork, and favourite clear dice of the set.  He is a beast, powerful and strong with breath weapons as well, and certainly an evil powerhouse. 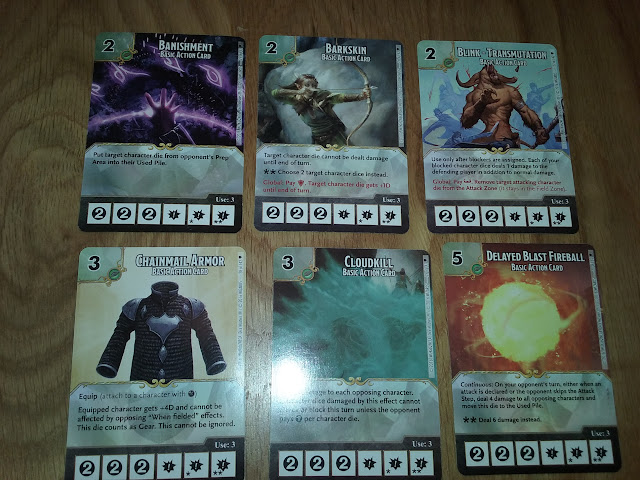 The set also comes with 10 basic action cards, these can as always be mixed in with the other sets to get actions you want, boost support, or cause direct damage.  Barkskin gets honourable mention for being my second favourite artwork from the set.  Chainmail armour gives your character an extra 4 defence making him very hard to take our, Banishment is a cheap action to cut down the amount of dice your opponent can use the next turn. 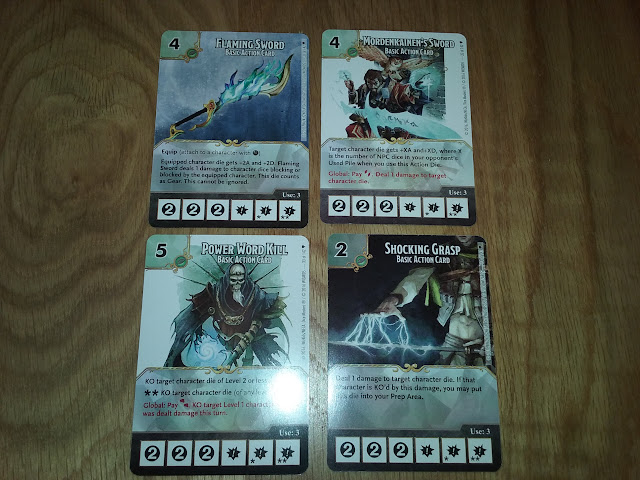 Flaming sword is another equipment option that gives the character more attack, but less defence.  Power Word Kill is going to find its way into my list on a regular basis I think, you just KO a character of level 2 or less, and any level if you get the burst. combined with banishment you can nuke a character then push it back so it will take a while to cycle around again.
The manual has a nice little play mat in it to give you an idea of the different zones on the field of play which is a nice touch much appreciated. 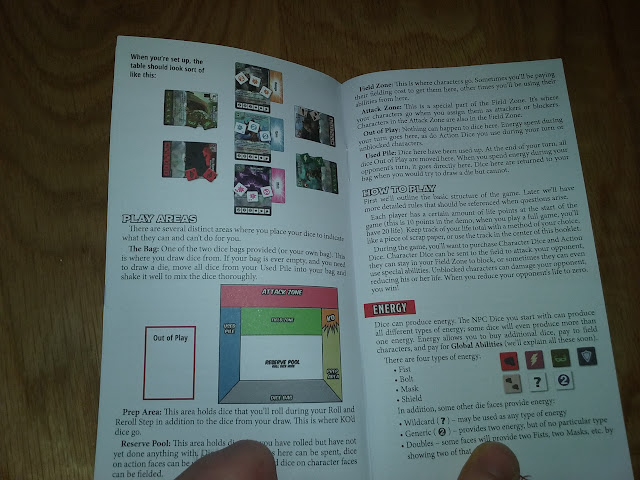 The manual has once more improved, making things even clearer and easier to understand, with full colour diagrams and easy to follow steps.


This set once again shows an improvement in quality of components (dice bags) and rules (easier to follow rulebook) over the last edition, its well balanced as well for 2 player mode, or you can use this to form a full deck for yourself to take up against a friends superhero sets.  Its full of good cards, balanced in a two player set, and very strong and complimentary in a single deck, the action cards provide something new in the form of equip, and have some excellent ones.  If you only play the superhero versions grab this! you will have a great time.  If you have not tried Dice Masters, grab this set, its great fun, and if you are a D&D fan, the art and background will have you enthralled.  And of course the fact it can be mixed in with any and all of the sets out there! superman vs gnome Ranger... why not!

I like this set better then heroes, it has Dragons in it! so now I can get closer to having lots of dragons all the time.  I like the art, they are really nice I could just put them in a folder to look at

Faerun under Siege, two player starter set has an RRP of £16.99 and can be found in your local store, take a look here to find yours.  You can expand the game from boosters available in store, they provide two random cards each with one associated dice.  they RRP for £1 and can provide plenty of variety for your forces.