Dicemasters.  Its a great system, I had ignored it being not a massive superhero fan, until I tried the D&D set, and I enjoyed it so much as a game, I am  hooked now.  if the other sets are superhero themed, its time I learnt more about them, so I dived into the latest starter set for Dicemasters.  DC War of Light.  Fortunately I have friends that are hero buffs, so they where able to give me a bit of background on it.  I was a bit concerned with an unfamiliar theme that I wouldn't enjoy it as much as I do when playing the D&D version, but I was wrong.
to learn more about how Dicemasters plays and see our review on the D&D Dicemasters Starter set head over here.  Time to dive in! 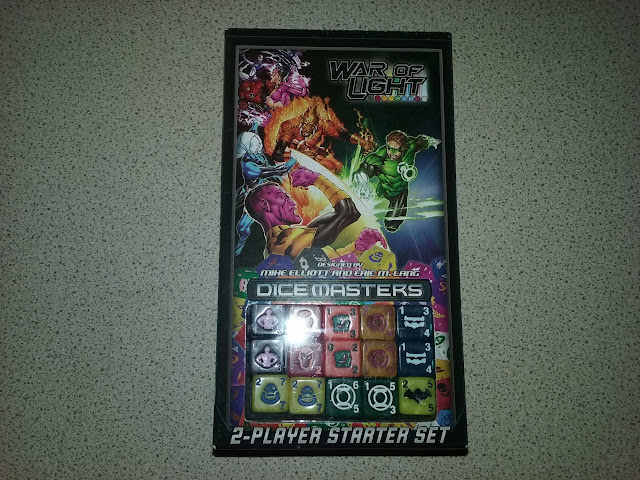 The box features bright and colourful superhero artwork, I recognised the Green Lantern at least! 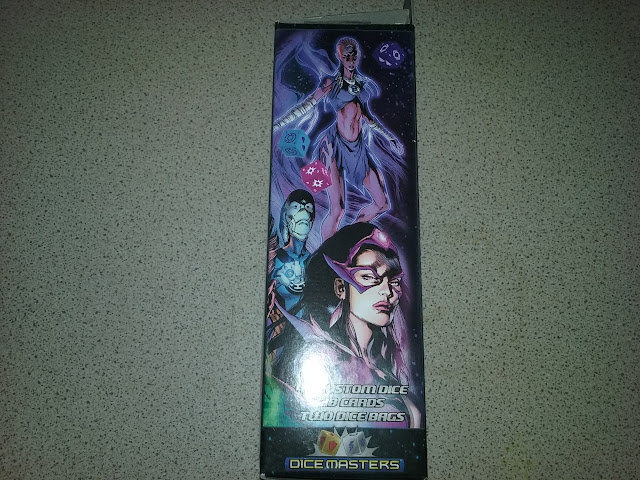 More Excellent art adorns the side. 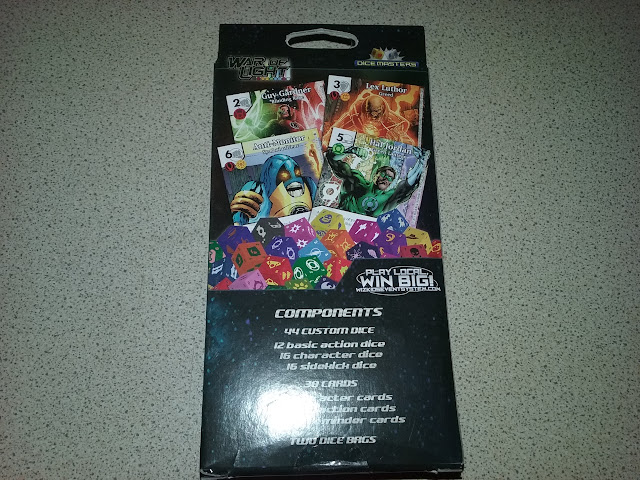 On the back is a list of components, some pictures of cards, I was happy to recognise Lex Luthor from these as well.  But what is inside? what superhero's and villains come to add more flavour to your Dicemasters games? lets see...... 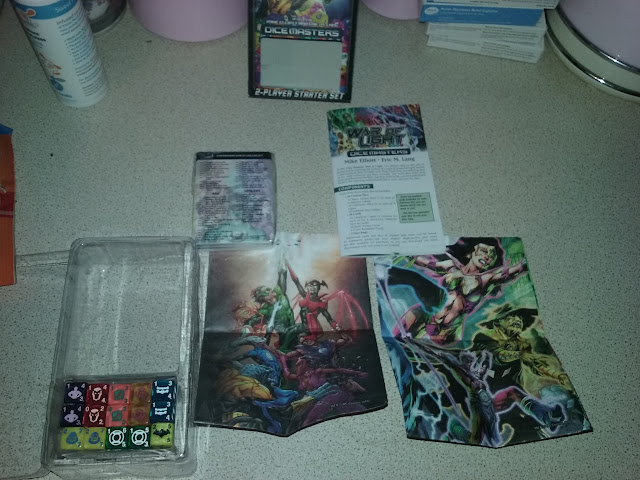 you get a card that tells you what other cards are available in the booster packs you can get.  An instruction manual, loads of dice of course and a pair of dicebags. 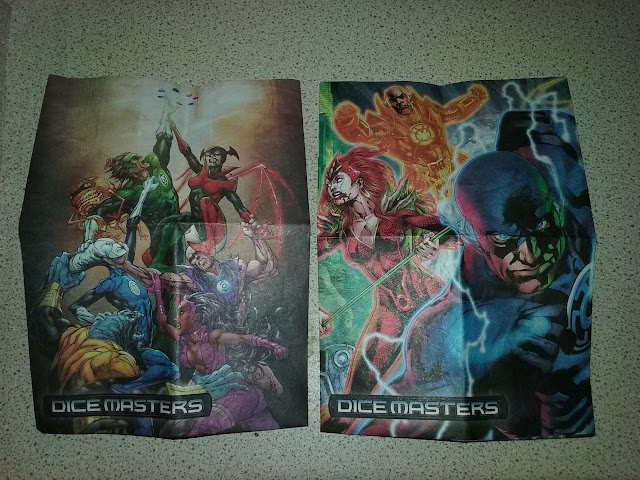 The dice bags in D&D where blue and red, these however are amazing looking! I love the artwork on them, really add to the flavour of the game, very very impressed. 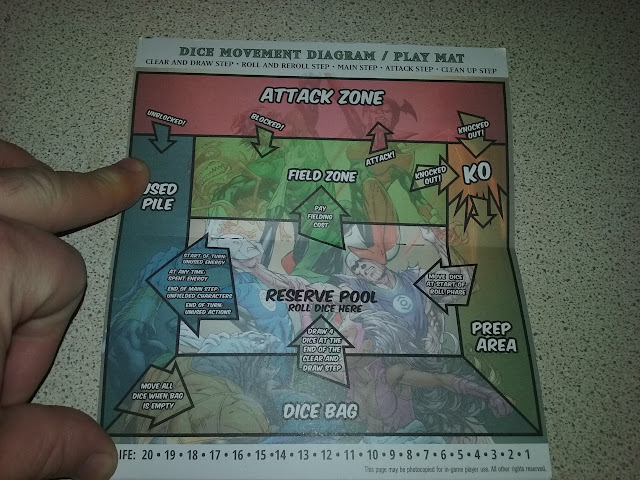 The rule booklet is full colour, and has a mini play mate in the middle as a guide, though you can download and print one form Wizkids website. 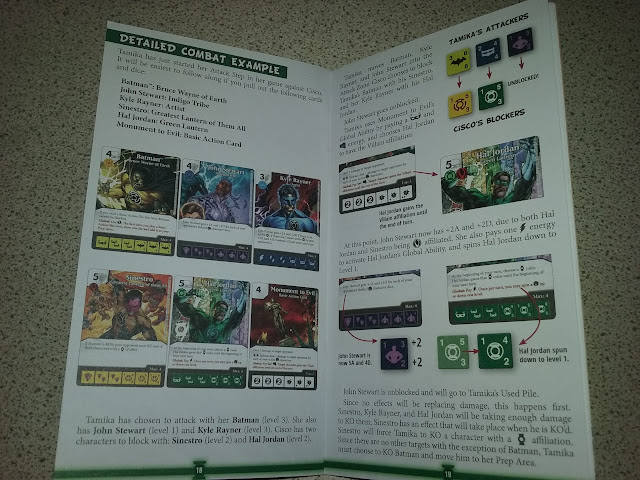 The manual does a great job of laying out how to play, full of colour examples, and a handy rules reference at the back. 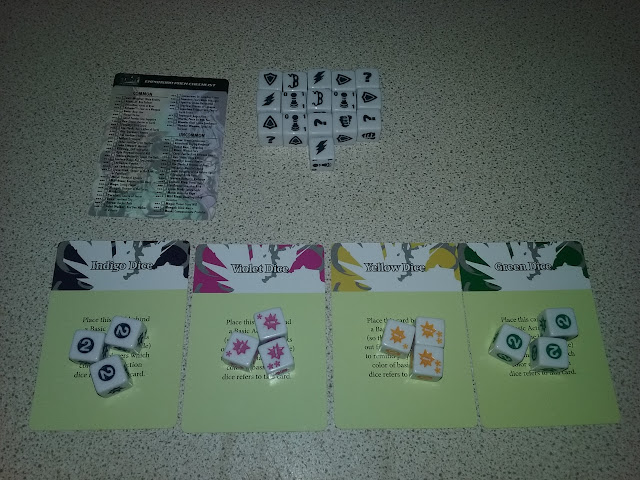 You get your 16 "sidekick" dice 8 for each player, and four new coloured cards with corresponding dice for the powers, so very handy if you have other sets you have some more options now. 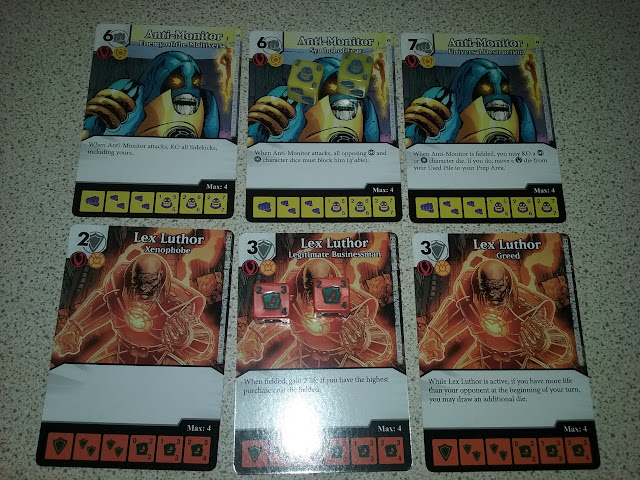 Onto the cards, as with D&D you get 3 different variations of a card, but you can choose only one of that name.  Starting with villains, we get Anti Monitor, he is costly but hits hard.  Lex Luthor is fairly cheap at 3 energy and has some good abilities if you have more health then your opponent. 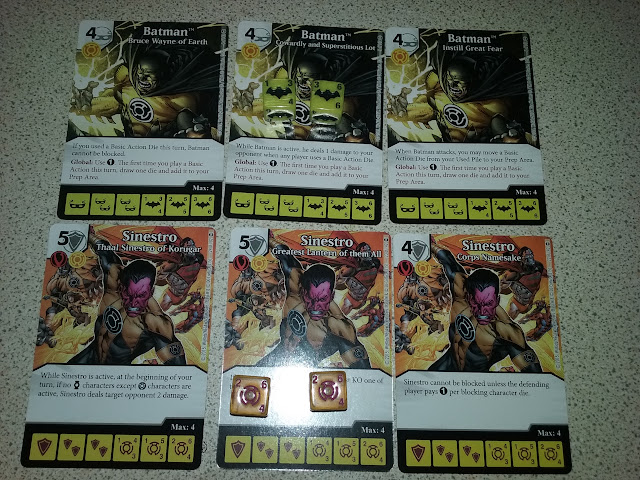 We have Batman with fantastic art, and a great yellow dice and the classic ~Bat symbol on it, he works well with your action dice.  Sinestros dice is a translucent yellow and red, I really like it, and how the cards show all the faces of the die on them at the bottom. 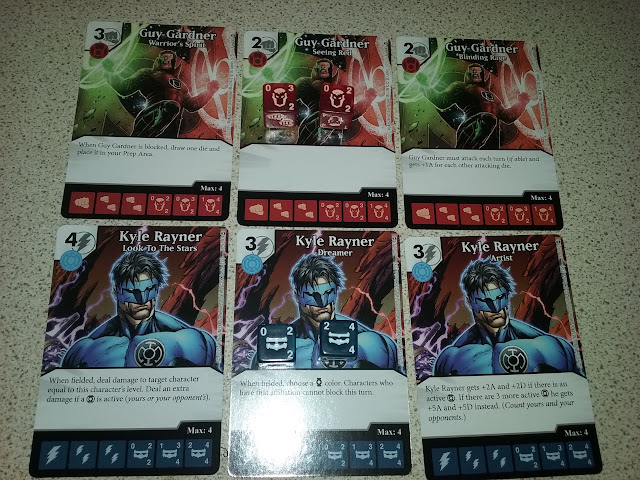 Next up we have Guy Gardener, he can provide some good hitting power for low cost.  Kyle Rayner gets stronger if a Green Lantern is in play. 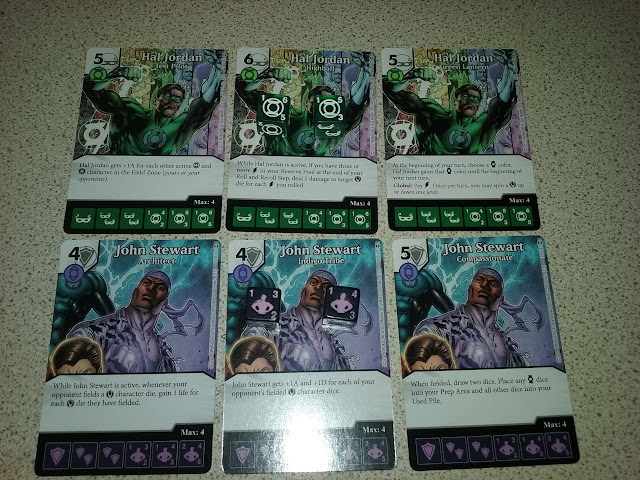 Hal Jordan the green lantern, a powerful dice that can support other lanterns.  John Stewart can give you life when ever a villain is fielded, so he works well in a support role. 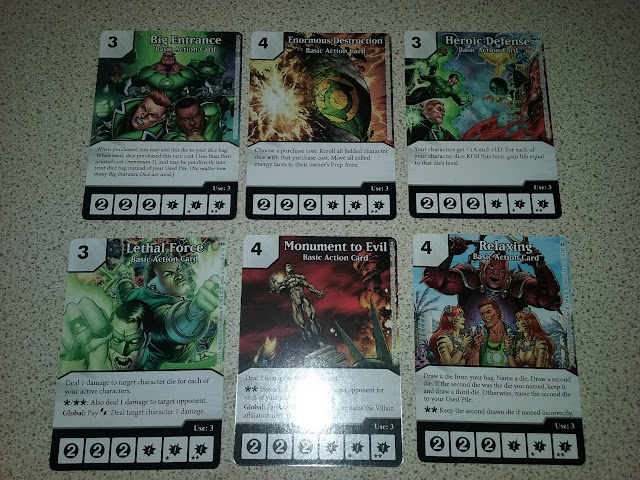 You get 10 new Action s to misx into the game.  You can actually mix Dicemasters sets freely, so you could some of these cards with your D&D and vice versa, its one of the things I really like about the system.  There are actions to cover all sorts of scenarios, from direct damage in the way of Lethal Force and Monument to evil, to getting more dice out with Relaxing. 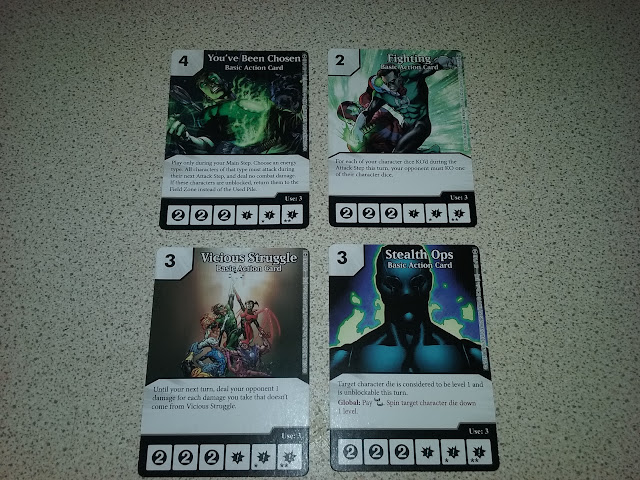 Stealth ops can make one of your die unblockable, and Vicious struggle can inflict more damage potentially. 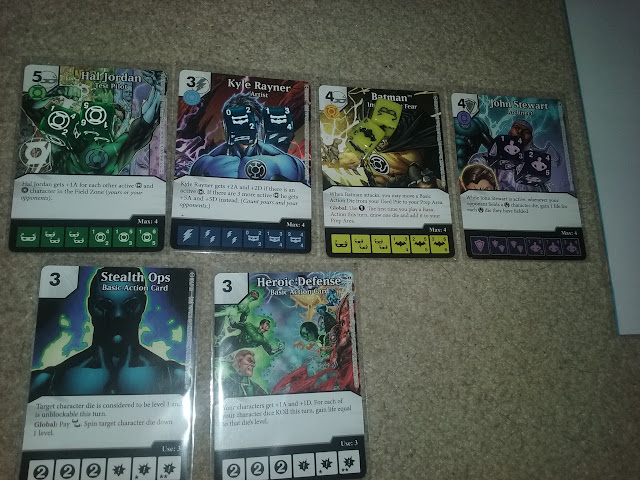 Using the starter set I whipped up 2 teams for a quick 2 player game, I would be playing the forces of evil, and Olivia would be the good guys (she always is)  She went with Hal Jordan Testy pilot, Kyle Rayner Artist as he can be boosted by Hal.  Batman instil Fear, just because he is Batman, and John Stewart to try and recover life.  For her actins she went with Stealth ops so she could hopefully make a powerful character like Hal or Batman unblockable for a turn, and Heroic defence to bolster for power. 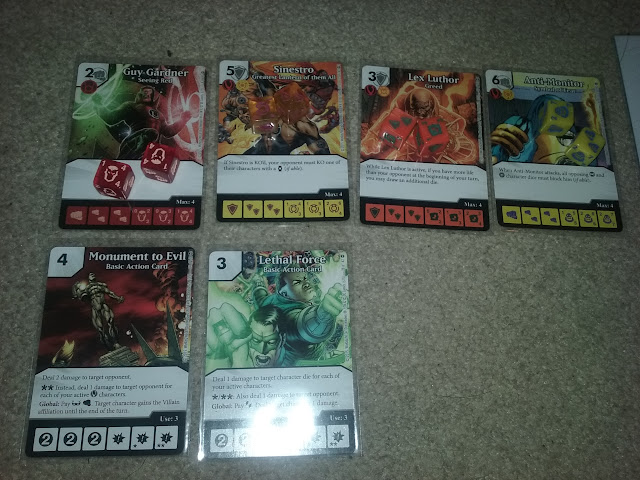 I took Guy Gardner (as there are not enough villains in this set to have 4 on my side which is my one gripe) Sinsitro as he can knock out Green Lanterns, Lex to gain life and as he is cheap, and Anti Monitor to jut hit things hard.  For my Actions I took Monument to evil to inflict direct damage, and lethal force to try and thin her numbers. 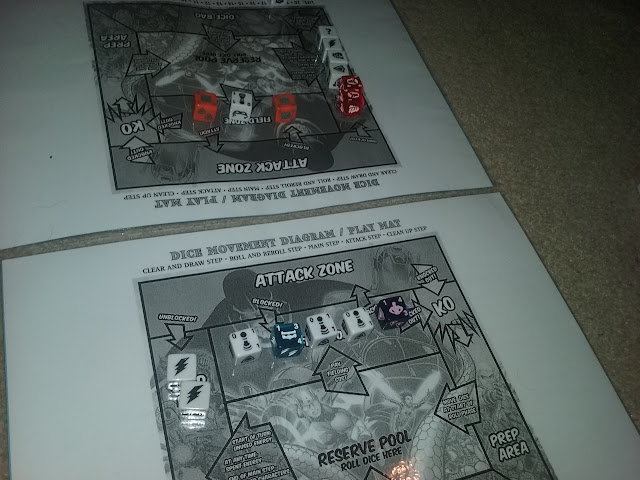 The game swung back and forth early on, she had more characters out than me 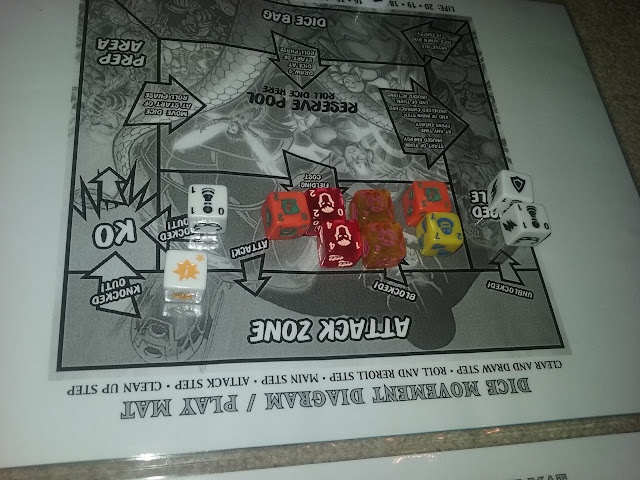 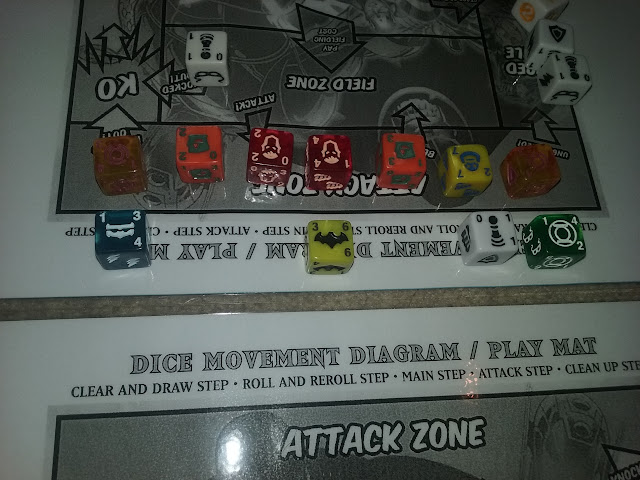 I caused lots of damage here, then sat back and built up for a knock out blow.  The action Lethal force had proved my friend doing plenty of damage before my Evil villains crushed her. 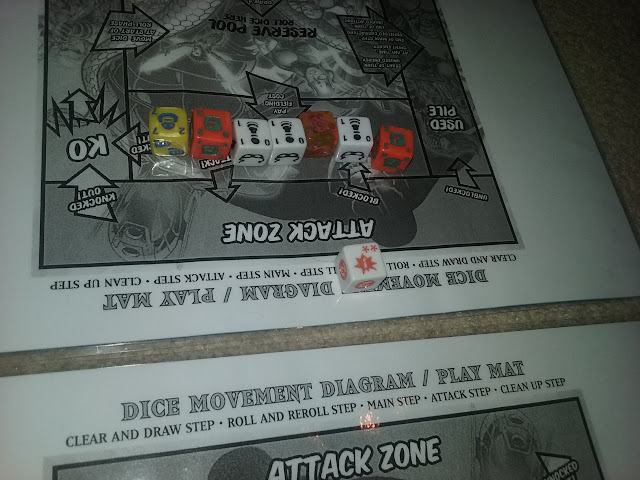 With only 2 sidekicks in play I overwhelmed her with lethal force and a crushing assault.  She has decided next time she is taking Dragons, which you can do from D&D, so I have booked in a game using the D&D set against me using the DC set, to see what happens.

This is another great addition to the Dicemasters world, full of great characters, some excellent new actions, and the same fun and fast tactical gameplay as before.  If you are a Dicemasters fan, this is a must have, if you are superhero fan, the same, and if you are a fan of the DC comics you will get even more enjoyment from this set, grab one now and add it to your Dicemasters collection.

Dicemasters DC War Of Light two player starter set has an RRP of £16.99 and can be found in your local store, take a look here to find yours.  You can expand the game from boosters available in store, they provide two random cards each with one associated dice.  they RRP for £1 and can provide plenty of variety for your forces.

Stick with us for plenty more Dicemasters action to come, booster openings, mixing in boosters to your decks, and of course mixing in D&D and other sets together as well as playing them against each other.