Skip to main content
Labels
Posted by Unknown May 04, 2016

Its that time again when we delve into A Game of Thrones the card game 2nd editions latest Chapter pack.  The joy of living card games means you never get random cards.  You get 20 new cards in the pack, each with 3 copies so a total of 60 cards.

“The Great Shepherd sent me to earth to heal his lambs, wherever I might find them.”
–George R.R. Martin, A Game of Thrones 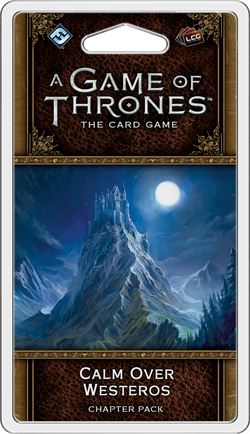 Westeros lies under a deceptive calm. In King’s Landing, Eddard Stark pulls another layer away from the lies surrounding Robert Baratheon’s children. The Eyrie is shaken by the arrival of Tyrion Lannister and his desperate gambit to win his freedom. Across the Narrow Sea, a maegi plots her vengeance against Khal Drogo for the destruction of her peaceful village. Everywhere, events are set in motion that will bear terrible consequences.

Lets take a look and see who we meet on our journey this time. 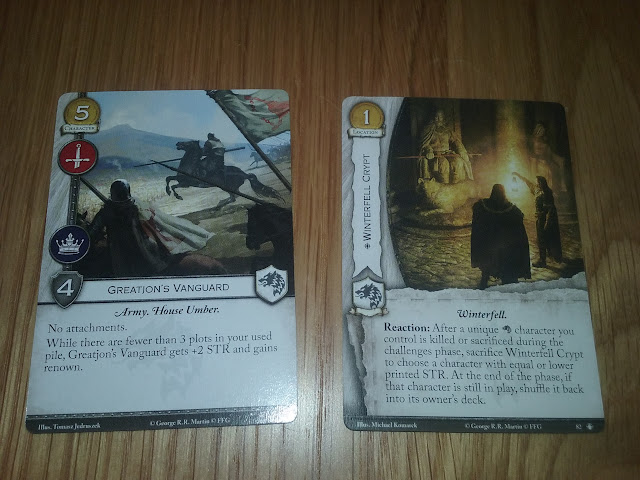 First up some additions for house Stark.  The Greatjons Vanguard, cost 5 strength 4 with military and power icons. This card gets +2 strength and renown if there are less then 3 plots in your used pile, so early game its a beast of a card.  Winterfell Crypt is a 1 cost location.  that has a reaction that can return a character to your opponents hand. 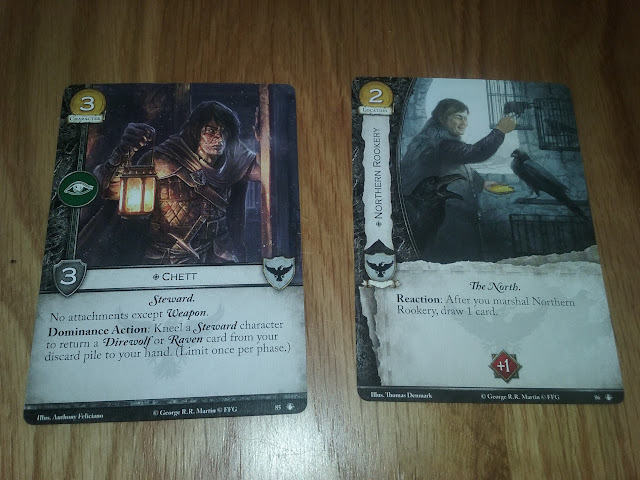 The Nights Watch get Chett, a 3 cost 3 strength character with the intrigue icon.  He has dominance phase action that lets you kneel a steward character (like Chett himself) to return a Direwolf or a Raven from your discard pile to your hand.

Northern Rookery is a 2 cost location that lets you draw a card after you marshall it, and also increases your hand size by +1 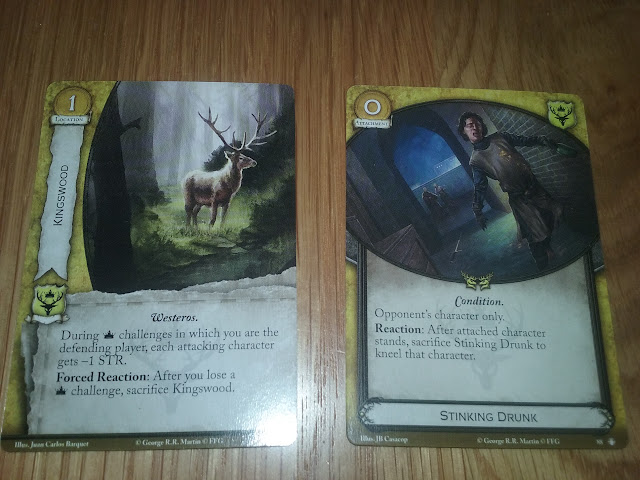 Baratheon get a 1 cost location in the Kingswood.  During power challenges in which you are defending, each attacking character gets -1 Strength, though if you lose a power challenge you must sacrifice it.  Stinking Drunk is a 0 cost attachment that after the attached character stands sacrifice stinking drunk to kneel that character.  This is excellent for controlling who can challenge you. 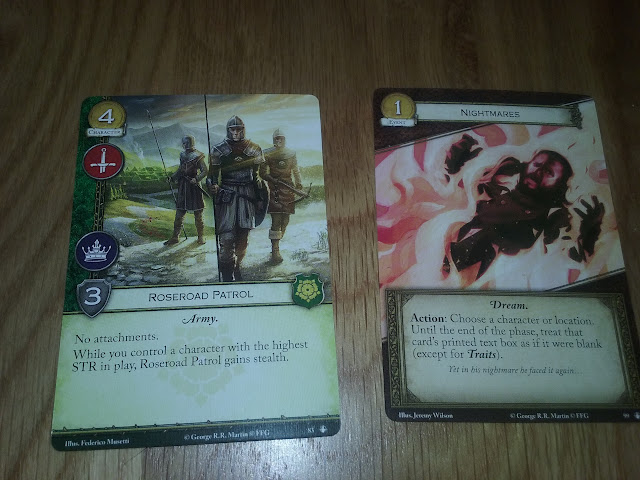 Tyrell gets the Roseroad Patrol, a 4 cost 3 strength army character with military and power icons.  If you control the character with the highest strength they also gain stealth.  Nightmares is a 1 cost event that as an actin you choose a character or location and treat the text box as blank.  Very handy to shut down those powerful characters effects, or locations you may need to be inactive. 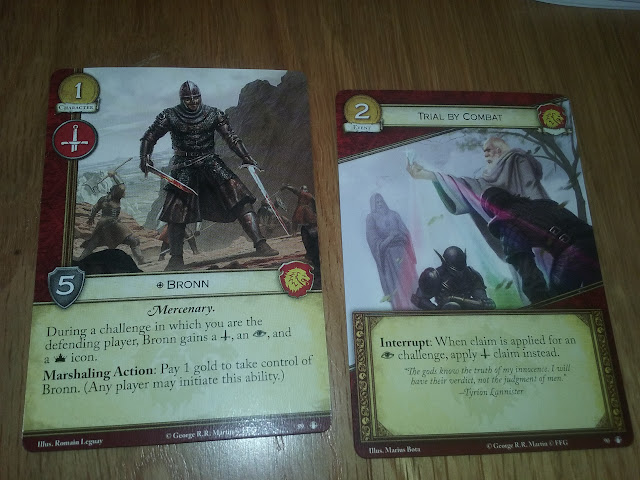 Ahh the Lannisters, my favourties! for 1 cost we get Bronn, who is 5 strength with a military icon.  However when defending he gets all 3 icons.  1 cost for 5 strength?  there must eb a catch you are thinking, and yes... there is.  As a marshalling action any player may pay a gold to take control of Bronn, so this could devolve into a bidding war for him, so make sure you don't use all your gold.  Trial by combat is a 2 cost event that can be used as an interrupt when claim is applied for an intrigue challenge, allowing you to change it and apply the military cost instead.  For the Lannisters who excel at intrigue this is a great way to knock down their numbers, or use it as an almost double military play. House Greyjoy get the Raider from Pyke, a 2 cost 2 strength character that gives each weapon the ambush ability for its cost.  Very useful for a nasty surprise.  Iron mines are a 1 cost location with an interrupt that when a character would be killed, sacrifice Iron mines to save them.  For its cost an excellent card. 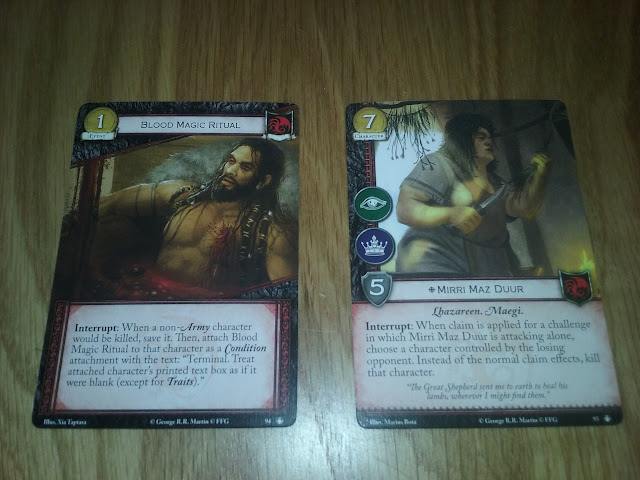 The Targaryens get the 1 cost event Blood Magic Ritual that as an interrupt lets you save a non army character that would be killed, and attach this to them, you then treat the text box as blank, useful though to save a powerful high strength character.   Mirri Maz Duur is a 7 cost 5 strength character with intrigue and power icons.  As an interrupt when claim is applied for a challenge in which she is attacking alone choose a character controlled by the opponent, and instead of regular claim choose and kill them.  This is brutal as it lets you assassinate chosen targets, so best make sure you can block her!  Sadly, she wins my award for worst art in this set. 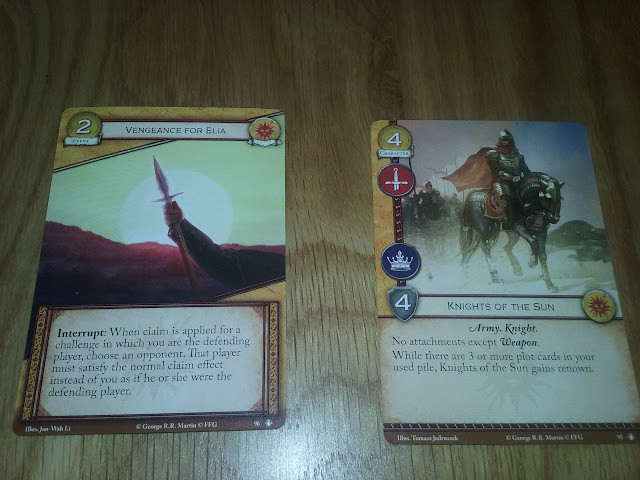 House Dorne get a 2 cost event Vengeance for Elia that as an interrupt happens when the claim is applied for a challenge in which you where the defending player.  The attacker must satisfy the claim effects instead of you.  very useful to cause some upset and save yourself.  My award for my favourite art in the pack goes to Knights of the Sun, a 4 cost 4 strength card with military and power icons.  When there are 3 or more plot cards used he gains renown, making them more powerful in the late game, like most of the Dorne cards. 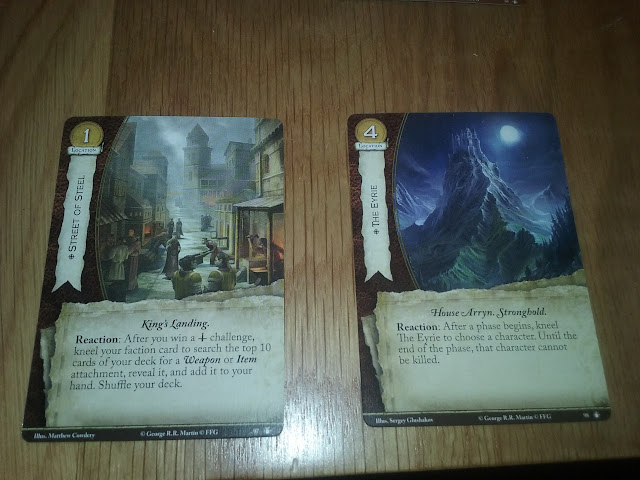 We get 2 neutral locations.  The Street of steel is a one cost location that has the reaction after you win a military challenge you can search the top 10 cards of your deck for a weapon or item and add it to your hand.  The Eyrie is a 4 cost location that can be knelt after a phase begins. You choose character and that character can not be killed, excellent for keeping the ones you need a live and stopping the claim on a military challenge. 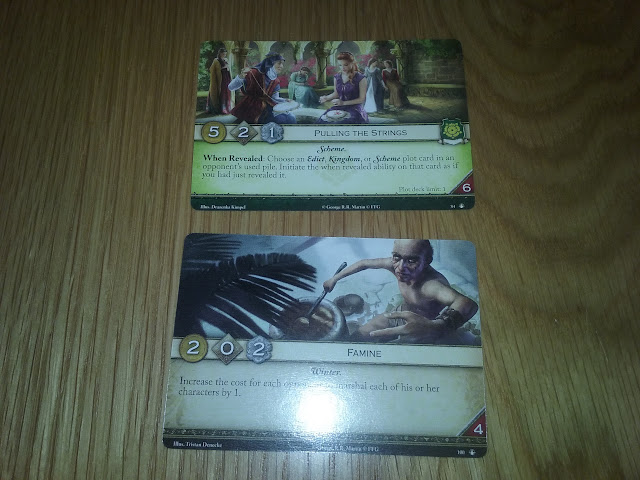 For plots we get the house Tyrell only Pulling the Strings, that has 5 income, 2 initative and 1 claim with a reserve of 6.  When revealed you may choose an edict, Kingdom, or Scheme in your opponents used pile and use the when revealed ability of it, so this is excellent to get double effects, or something useful from your opponent.

Famine is a 2 cost 0 initiative 2 claim card that increases the cost of each marshalled character by 1.  With a claim of 2 though, this is good if you have a solid set of cards ready to go.


Again FFG have done excellent work with this set, full of theme and variety to change the way your decks play.


You can pick up your own pack to expand your choices with an RRP of £11.99 from your local game store
To learn more about A Game of Thrones the card game second edition take a look here
and check out our other articles with more to follow.