Skip to main content
Labels
Posted by Unknown May 25, 2016

the fact this comes from an episode makes it even cooler! so after watching the episode in question (I always wished they had made a game of Card Wars when I watched it) we broke this out and unleashed our own Card Wars!, true without the funky 3d effects, but with imagination switched on it became that and more. 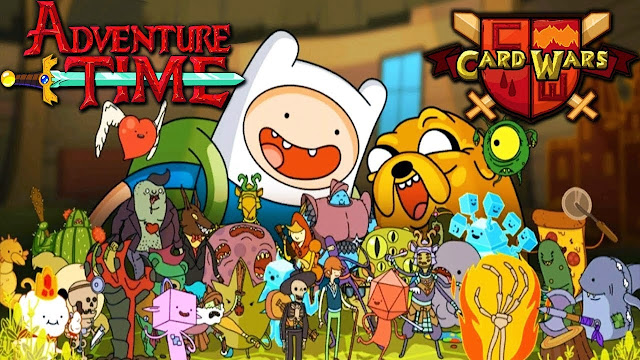 Adventure Time Card Wars is the most epic card game ever found in the Land of Ooo, or anywhere for that matter! In the Adventure Time episode "Card Wars", Jake begs Finn to play his favourite trading card game. Finn accepts, despite warnings from Beemo on how very competitive Jake can be while playing the game. Finn and Jake battle against each other to decide who will be the Dweeb and who will be the Cool Guy. 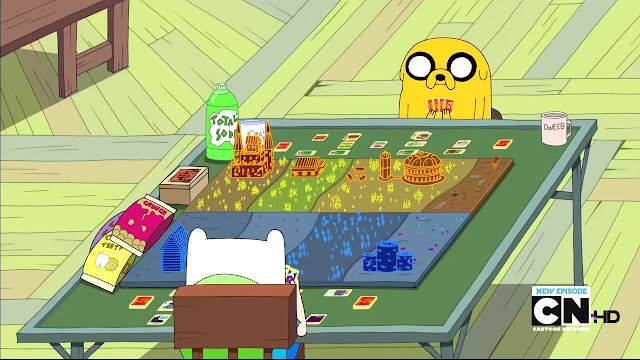 With Olivia being a firm fan of Princess Bubblegum, this was the deck for her! meaning I got to be Lumpy Space Princess... Oh.. My.... Glob!﻿ 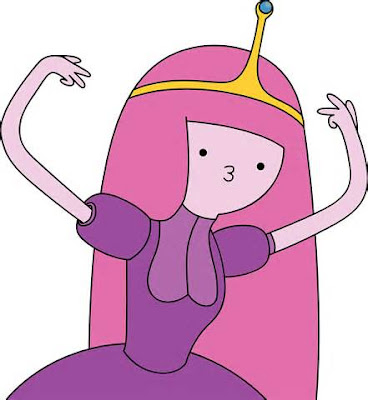 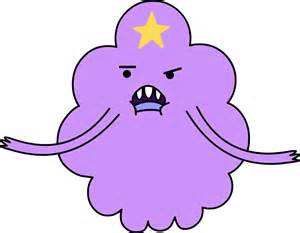 Lumpy Space Princess’s deck is a Useless Swamps and Blue Plains deck. This is the first time a Collector’s Pack has featured something other than a mono-color deck. The Useless Swamp side of the deck is themed around discarding cards to power up your Creature abilities. Which is never a bad thing for the swampy side, as they thrive when they have built up a sizable discard pile.
The Blue Plains side of the deck is themed around replacing Creatures you control. Many of the Creatures in this half of the deck get killer bonuses for replacing Creatures that were already in play. It complements the Useless Swamp desire for a large discard pile as well. Such synergy! 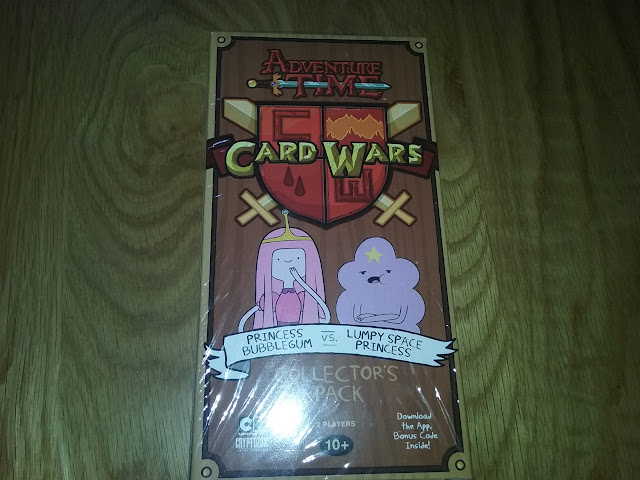 It comes in  this nice little box with the main characters on the front for each deck.  There are plenty of other sets too if you want to add more variety or get your favourite character. 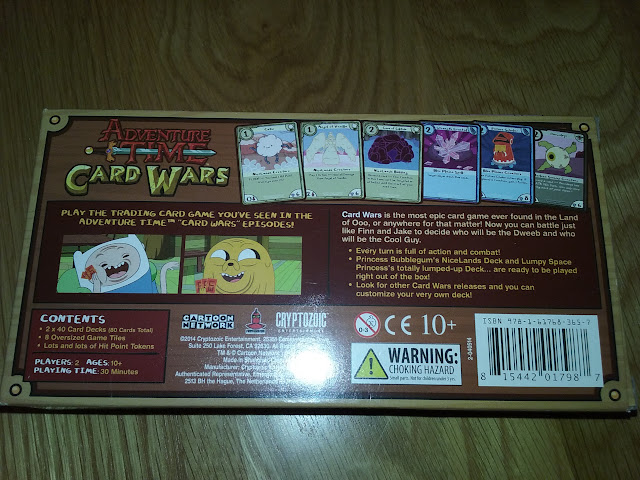 I love the art on the back, straight from the episode, and a nice overview of the contents and what it is all about.  30 minutes play time sounds about right, and ages 10 and up is flexible, as Olivia had got it pretty quickly, but then she loves Adventure Time so wanted to.
Now.. what's in this wondrous box? lets look! 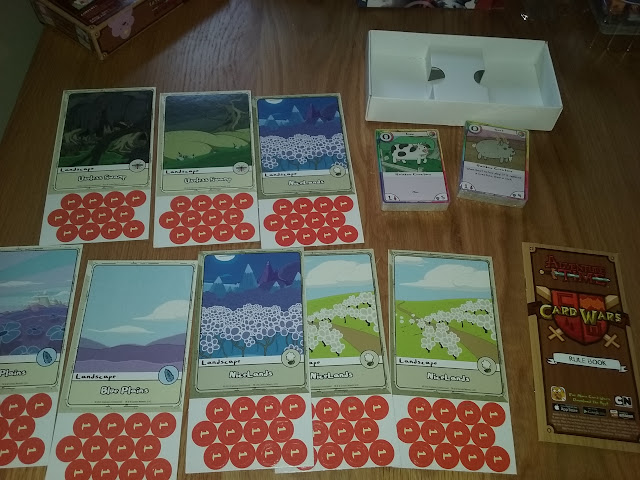 You get the punch out lands. This is a lane combat card game, so each player has four lands that act as lanes. plus a bunch of hitpoint tokens, that have a 1 on the first side and a 3 on the revers for keeping track of hits.  You get your two decks one for PB, and one for LSP, and a colour mini rulebook. 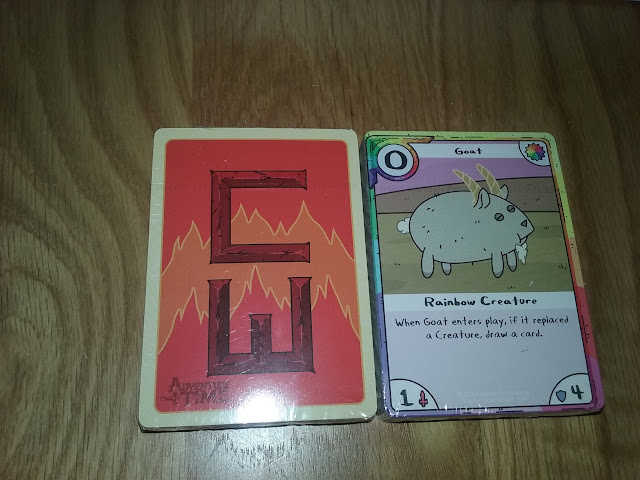 the decks have the flaming Card Wars logo on the back, and the creature on the front.  The stats are... in the top left is the action cost to deploy a creature.  You get 2 actions a turn, so best make the most of them, in this case he costs 0 so is free.  In the top right is his affiliation, nicelands, swamps, and so on.  The Goat is a rainbow creature so can go on any land, but normally you will need at least as many lands as the action cost of that type to deploy.  Then you have any special abilities on the card, and in the bottom left the attack value, and health in the bottom right. 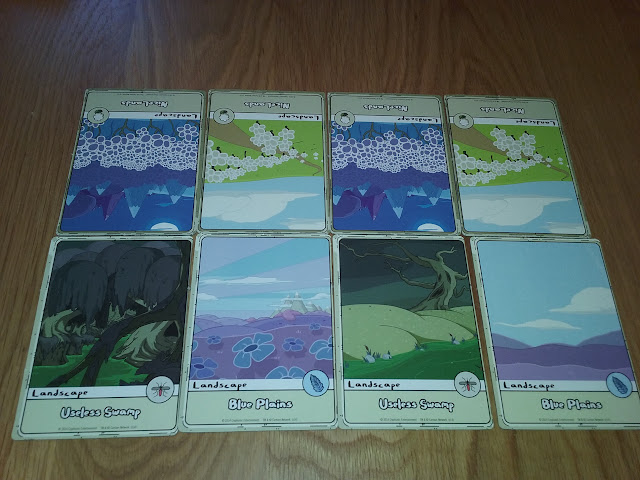 Here you have your lanes, they  say what they are on the bottom, and have symbol that will match the creatures in your deck. 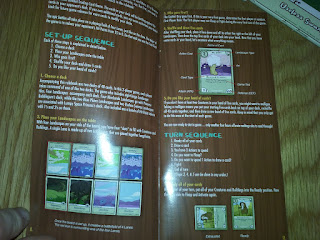 The rulebook is full colour, and has plenty of diagrams, and is written in a way fans of the show will enjoy, plenty of humour there to enjoy as you will see!
But how does it play?

Well, the rule book says you follow these steps in the turn....
Its pretty simple to follow, and if you are a veteran of other card games, you will pick it up in no time.  Even new players wont take long to grasp the rules of it. 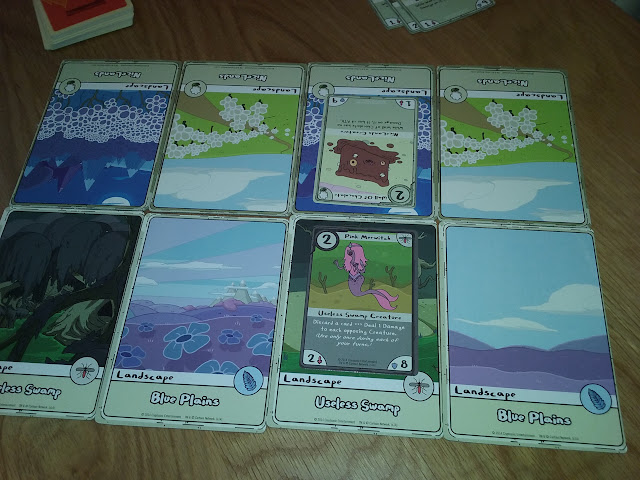 When you first set up you have your four lanes.  I have played a pink Merwitch into mine, and Olivia has played a Wall of Chocolate so the damage wont go straight through to her.

The winner is the first player to reduce their opponent from 25 health to 0.

Creatures must fight every turn, unless they are flooped.  They move forward and turn sideways and attack, if your opponent has a creature there they do damage to each other, if not it goes through onto you!.  You can play a new creature in your turn to replace any that are already out, you may want to get one with higher damage or health down for example. 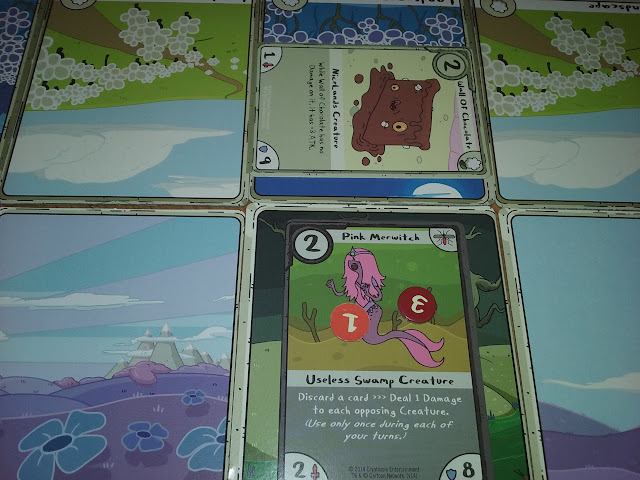 The Merwitch and wall of chocolate are going at each other, once Merwitchs 8 health are eaten through she is discarded, or I can play another creature to replace her. 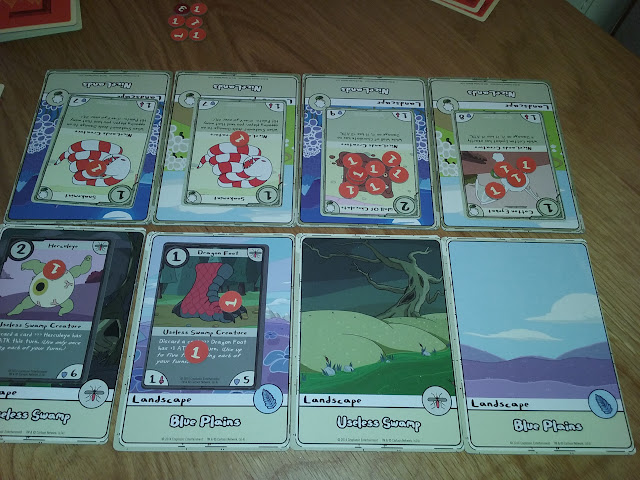 Things started getting brutal between us, with my lanes empty Olivia's creatures where able to do direct damage to me for me for a few turns, though overall I was winning having got her down to 8 health.  The thing is it shows how the game can swing and has a feeling of being balanced. 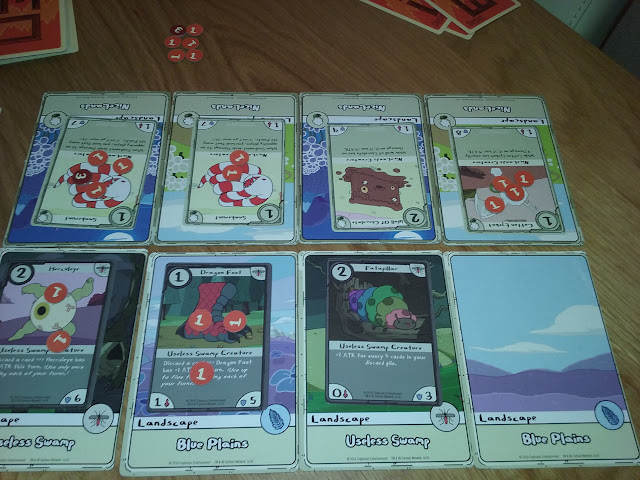 The hardest thing to remember is that every turn during the Fight phase, ALL your Creatures must fight, but both Creatures will damage each other so it never feels imbalanced, and it makes the game move along at a solid pace. 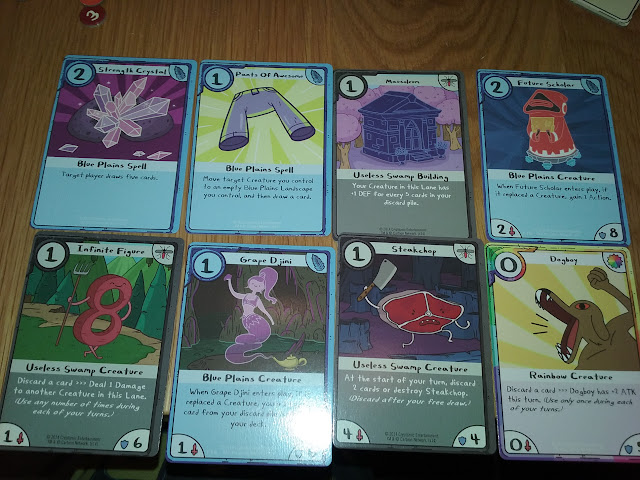 Taking a quick look at some example cards from LSPs deck.  The art is perfect from the series, and fits in really well.  You can see a mix of spells, and locations which are played at the bottom of your lane and provides a bonus to it in one way or another.  the creatures are all fairly generic so far, so you wont see Finn or Jake battling it out, well not yet anyway, but that adds to it, as you, like the episode in which we see Card Wars are the ones in control of the deck and game. 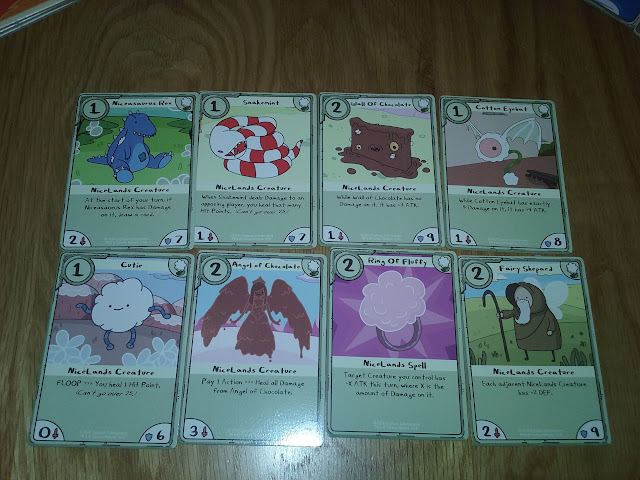 PB has some fun cards, that again all fit the theme, Angel of Chocolate proved a thorn in my side for the whole game! and when Olivia dropped the Ring of Fluffy on me it hurt a lot.  I love the art, the simplicity of the layout of the cards, and the overall look,

By picking up other sets you can start to build your own decks, and try them out against each other as well, so there is plenty of scope for expansion, or you can just have fun playing It out of the box, we played 1 game, which ended up as a best of 3, then a best of 5, which I only just won 3-2 overall.
It plays fast, is fun, and really FEELS like Adventure Time, since you have seen the game played in the series.  If you have never watched Adventure Time will you still enjoy it? Yes I think so, as its a solid lane domination card game at its core, but you will get so much more enjoyment knowing the background and the world.

" I LOVE Adventure Time, and I Love Princess Bubblegum, she is my favourite, so I wanted to be her.  I liked the Angel of Chocolate, and cutie kept my health up.  It was really fun to play this after watching the episode as that is one of me and dads favourite ones.  I wish they where 3d holograms though that would be really cool!  I really like the game, its easy to play, and I think if you like Adventure Time you will love it as much as me!" 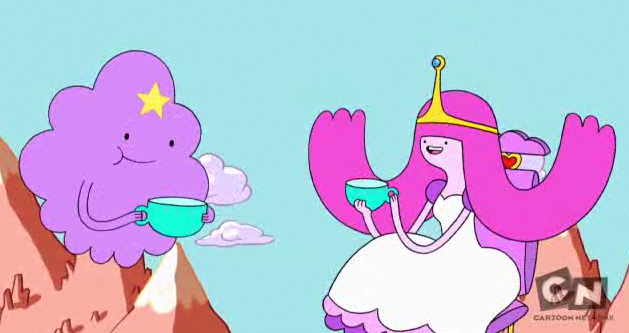 
With an RRP of 17.99 you get two decks, all the tokens and rules for a 2 player battle, and you can add more packs and sets to mix up your deck, or just play them straight from the box for some pickup and game fun.  go find your Local Store grab a se tor 2 and get playing!