Skip to main content
Labels
Posted by Unknown May 24, 2016


“The days when men like Ryam Redwyne and Prince Aemon the Dragonknight wore the white cloak are gone to dust and song. Of these seven, only Ser Barristan Selmy is made of the true steel, and Selmy is old.”
–George R.R. Martin, A Game of Thrones 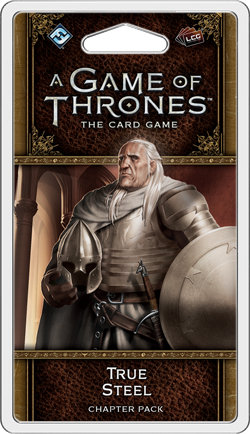 The fortunes of the Great Houses are in chaos. Eddard Stark has been beheaded on the steps of the Great Sept of Baelor, and House Lannister has stepped into the power vacuum created by Robert Baratheon’s untimely demise. Though the Lannisters hold King’s Landing, Stannis Baratheon has gathered his supporters on Dragonstone, Renly Baratheon has called on the power of Highgarden, and Robb Stark has already been proclaimed king in the north. War is on the horizon.
As with all of the chapter packs you get 20 new cards, with 3 copies of each for adding to your deck, for a total of 60 cards to expand your decks and add some variety and try new tactics.  So what do we get?........ 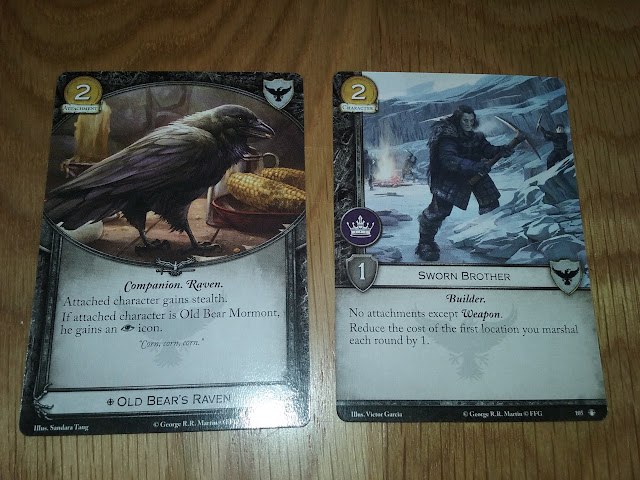 The Nights Watch get a 2 cost attachment in the form of the Old Bears Raven.  When attached the character gains stealth, which is pretty good, but if its Old Bear Mormont, he gains stealth and the Intrigue Icon, which is rare in Nights Watch making this a very useful card in general, and a must have if he is in your deck.

Sworn brother is a 2 cost 1 strength character with the power icon.  He can not have any attachments except weapons, but he does reduce the cost of the first location you marshal each round by 1, so that makes him pretty useful;, and after that he can be used as challenge fodder, and played again if you have more as e is non unique. 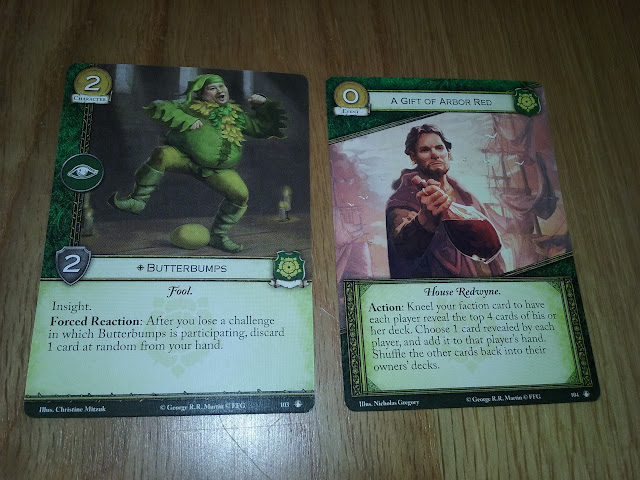 House Tyrell gets Butterbumps, he his cost 2, strength 2 with intrigue icon only.  He does have insight, but a forced reaction means you have to discard a card from your hand if he in a challenge you lose.  Very handy if you are confident of victory though.

A Gift of Arbor Red is a 0 cost event that as an action lets you kneel your faction card to have each player reveal the top 4 cards of their deck.  You then choose one to add to their hand, and shuffle the rest back in.  This can be used to try to guarantee your opponents next draw is not so good, and hopefully delay any big hitters you see come up. House Stark get Septa Mordane.  She is cost 3, strength 3 with the intrigue icon, which is generally lacking in Stark.  She really boosts up the Stark girls though, by giving Sansa +2 Strength and Renown, and Arya an intrigue icon and making her immune to opponents plots effects.

Ward is a 4 cost attachment, that can only be used on characters with a cost of 4 or less, but it is hugely powerful, as it lets you take control of them and gives them the Stark affiliation.  This used on the right characters can cripple your opponents plans, and I certainly will be putting 1 or 2 in my deck. 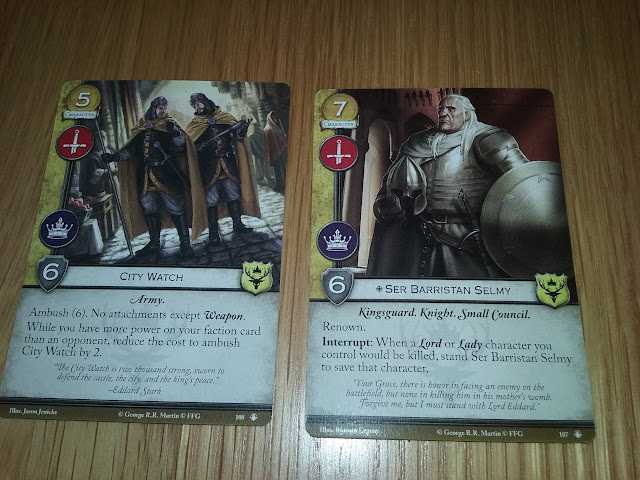 Baratheon  get the City Watch.  5 cost, 6 strength with military and power icons.  This is an army that has ambush 6, but if you have more power on your faction card (something Baratheon is good at) it reduces the cost by 2, meaning a 3 cost 6 strength card that can be dropped in the challenges phase to surprise your opponent.

Ser Barristan Selmy is a beast.  Cost 7, Strength 6 with military and power icons he also has a plethora of key words, Kingsguard, Knight, Small Council, and of course Renown.  he has an interrupt that when a lord or lady character would be killed, stand him to save them, so use him early in the challenge do some damage and stand him then to save a character later and of course add to your dominance score.  He will find plenty of use I am sure. 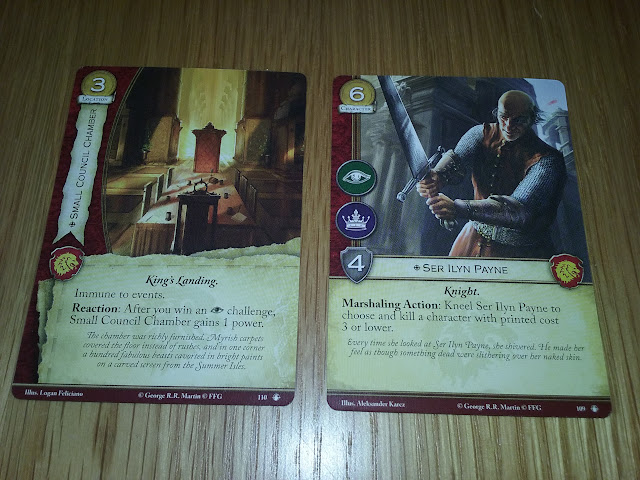 The Lannisters get the Small Council Chamber, a 3 cost location. This location is immune to events, and has the reaction after you win an intrigue challenge it gains one power.  With lannisters being pretty good at Intrigue this should help you wrack up the power quickly.

Ser Ilyn Payne is a 6 cost 4 strength character with Intrigue and power icons.  He has an actin in the marshalling phase that lets you kneel him to choose and kill a character of 3 cost or less, so you can save him for challenges or just start picking and killing off your enemy. 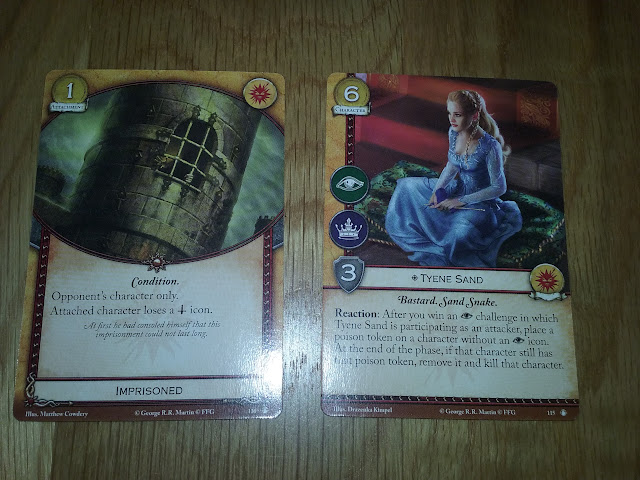 Dorne get the 1 cost attachment Imprisoned which makes the attached character lose the Military icon.  This can shut down the big scary enemy characters, well from military challenges anyway making them a bit more predictable.  Winning my favourite artwork for the set is Tyene Sand.  She is a 6 cost, 3 strength character with intrigue and power icons.  She has the reaction; after you win an intrigue challenge in which she is participating you may place a poison token on a character that does not have an intrigue icon.  At the end of the phase if they still have the token there they are removed and killed.  This can make her brutal for assassinating your enemies, and in a house with low intrigue she will prove deadly forcing your opponent to try to do everything to shut her down, letting your other characters have more freedom. 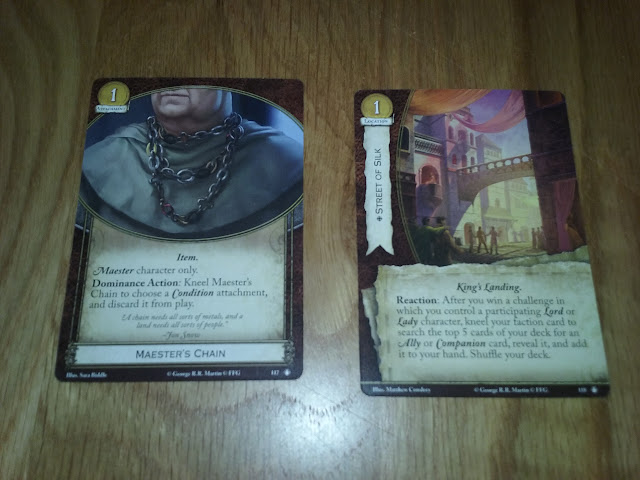 Neutrals get the Maesters Chain, a 1 cost attachment that can be on master characters only.  It provides the dominance action that you can kneel the chain to choose and discard a condition from play, very useful to try and keep your characters in top condition.

Streets of Silk is a 1 cost location with the reaction; after you win a challenge with a lord or lady participating you can kneel the faction card to search the top 5 cards of your deck for an ally or companion to add to your hand. 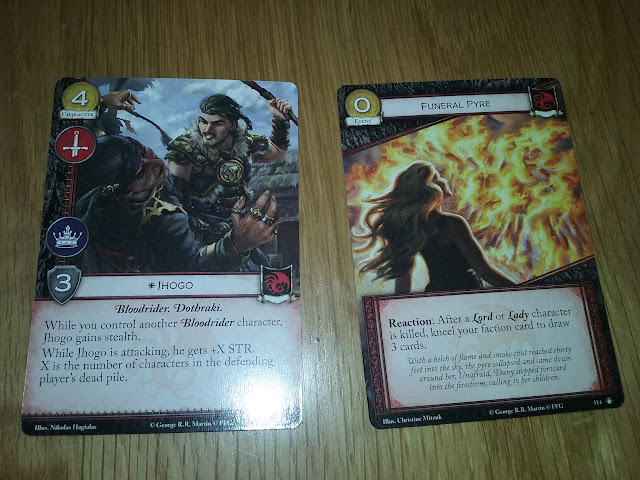 Targaryen get Jhogo the bloodrider to add to their forces.  He is a 4 cost 3 strength character with military and power icons, and if you control another bloodrider he gains stealth.  He also gets plus x strength where x is the number of characters in the defending players dead pile meaning he can potential be a beast if you have done enough damage already and really fits a strong military themed force.  Funeral Pyre is a 0 cost event that as a reaction can be played after a lord or lady is killed.  You must kneel your faction card, but you get to draw 3 cards. 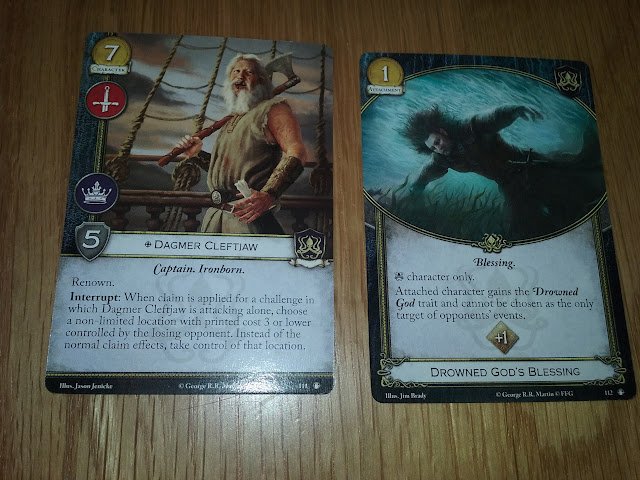 Greyjoy gets my second favourite artwork.  Dagmer Cleftjaw, (he just looks so happy!)  He is cost 7 strength 5 with military and power icons and he also has renown.  His interrupt happens when claim is applied in a challenge in which he is attacking alone.  You may choose a non limited location that costs 3 or less and take control of it instead of taking the regular claim.  This can provide all sorts of awesome bonuses and forcing the opponents to watch out for him. 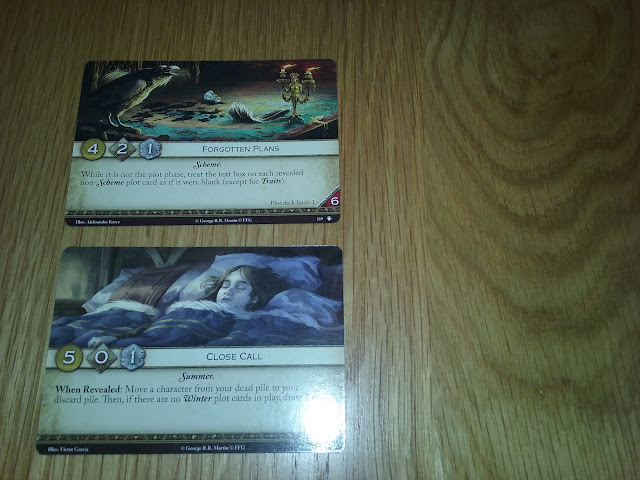 Next up is a pair of new plots.... Forgotten plans, has an income of 4, initiative of 2, claim of 1, and a reserve of 6.  Out of the plot phase you treat the text on all revealed Scheme plots as if they where blank.

Close call is a 5 income, 0 initiative 1 claim plot that when revealed you move a character from your dead pile to your discard pile (very useful for getting other copies of them out again) and if no winter plots are in play draw a card.


I love the pack, and the fact that each one comes with such variety to really change your play style, and keep the game fresh.  New plots can change your entire deck build too, as the plots are just as important as your main deck, and again fresh ideas can spring up from these.  If you are a player you need to grab this set, if not, grab the core game, then pick up some expansions its the best card game I have played.


You can pick up your own pack to expand your choices with an RRP of £11.99 from your local game store

Come and join us in all sorts of gaming chat in our Facebook group here, and come follow us on Twitter @rollyoursix join the chat, and tell us about your games!
Labels: a game of thrones lcg