Skip to main content
Labels
Posted by Unknown May 31, 2016

Carcassone, designed by Klaus-Jürgen Wrede and published first in 2000, it is named after the medieval fortified town of Carcassonne in southern France.  Its considered a classic in the world of board games, and a great Gateway game to introduce people to the hobby as its stated, the rules are simple, no one is ever eliminated, and the play is fast. 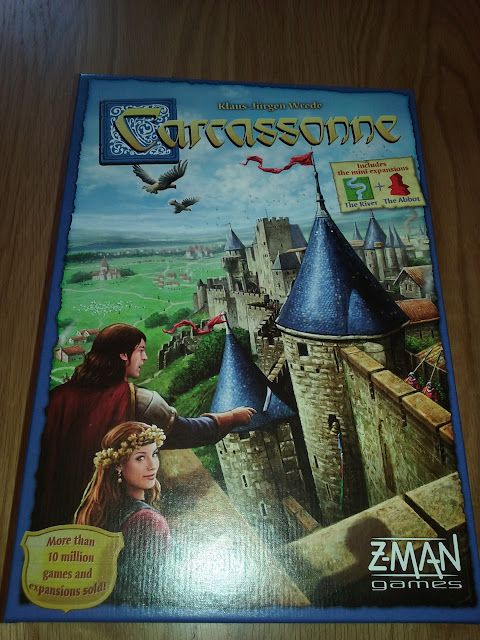 I love the art on the cover, it has a "classic" feel to it, and this set includes two mini expansions "the River, and The Abbot" with a rules sheet explaining them as well. 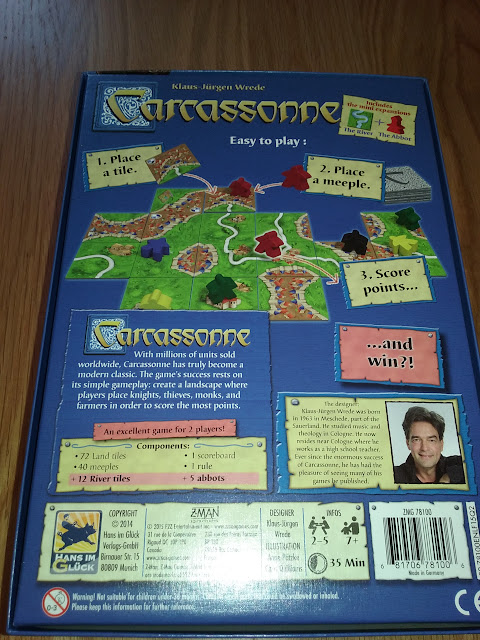 The back does an excellent job of explaining how simple the game is to play, and gives you an overview of the components, play time of around 35 minutes which Olivia and me found about right, and the age 7+ and since she is 7 and got the game fairly quickly I agree with the ratings.  It states it playes 2-5 players, but we have only played it with 2 though I can see how it would scale up fine. 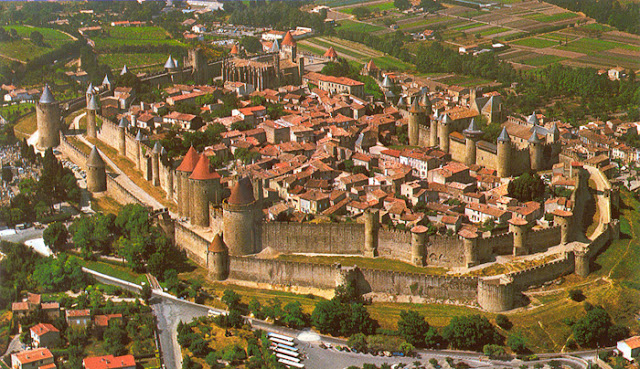 With that in mind, I thought it about time we took a look at it here, to see what you get in the box, and if it is actually any good.  Lets take a look in the box before Olivia and I break it out on the table to play a few games..... 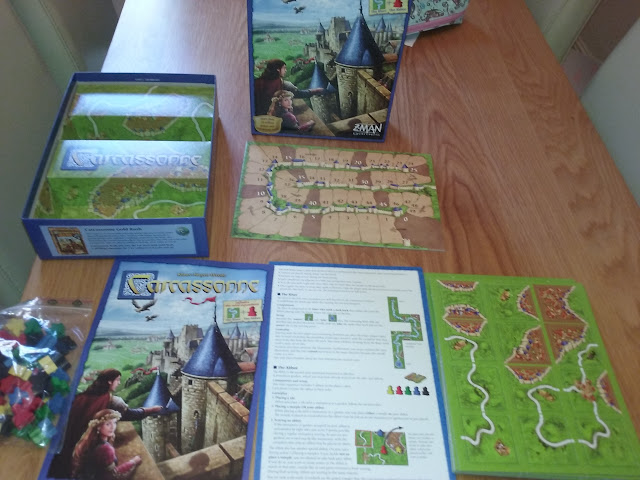 Popping open the box you get a nice selection of bits in it.  A manual, an extra rules guide, a stack of tiles that need to be punched out, a bag of wooden "meeples" and a scoreboard.﻿ 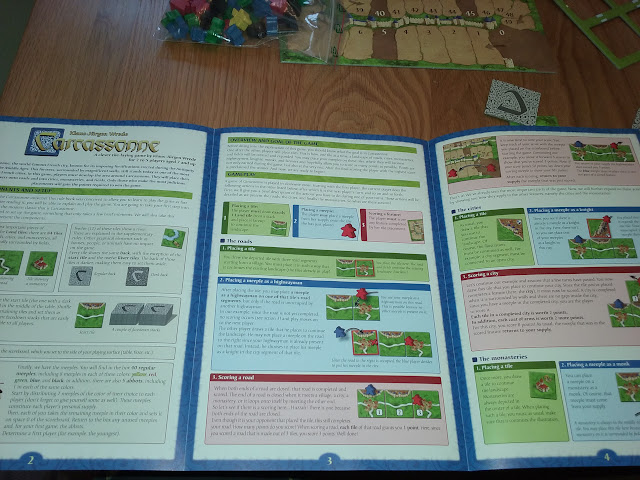 The instruction sheet is nicely laid out and easy to follow with plenty of colour diagrams in it. 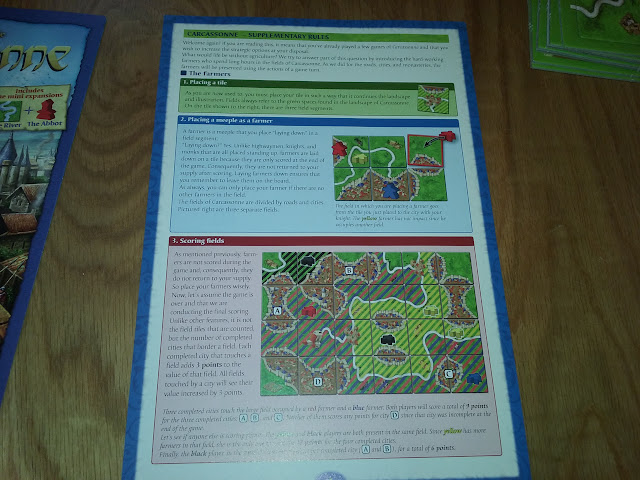 The supplementary rules adds seom more in, farmers, the river Abbott etc. all designed to enhance your game.  You can start with the basic rules, then work up adding bits in as you go and get a feel for the game, that's what we did.  Got the basic ideas down, then upped it to the next level where we felt comfy  having already got the basics nice and down. 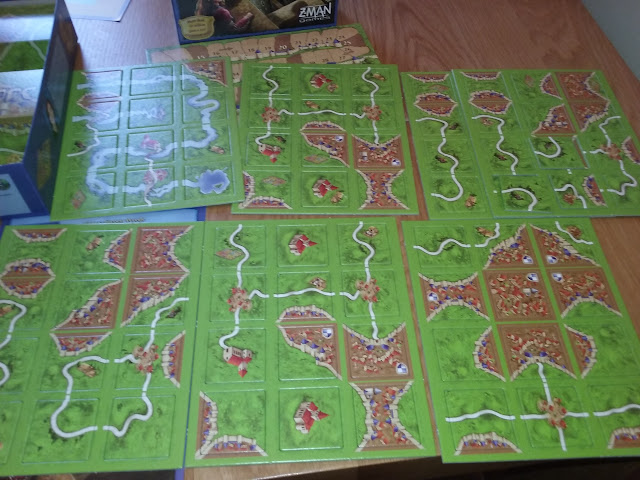 The tiles all need popping out.  It is nice thick quality card, so I can see this lasting  a long time . 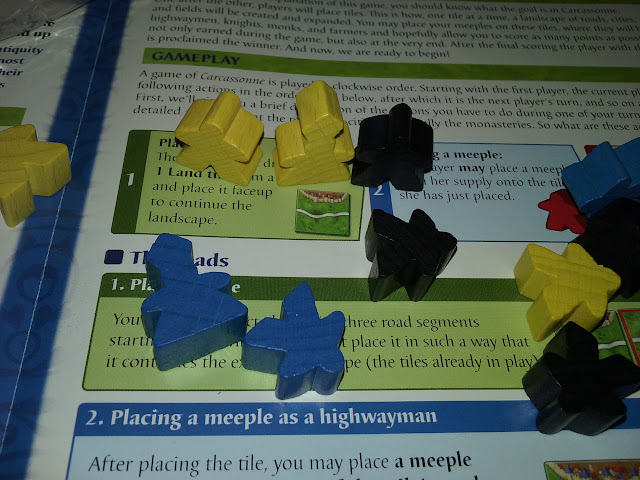 The wooden playing pieces (known as meeples in games) are nice, and have a quality feel about them. 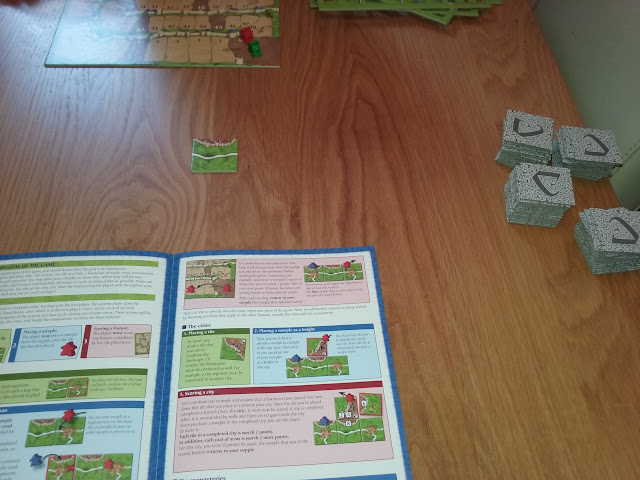 You begin with the start tile, and the other tiles randomly shuffled into stacks
On their turn, a player can do the following actions in the following order:
The player's turn is now over and the next player (clockwise) can start his turn. 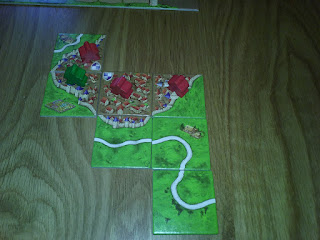 A player draws one tile of the face-down land tiles. He must place that tile on the table according the following rules:
In the rare circumstances where a drawn tile cannot be placed, the player returns the tile to the box and draws another tile.

After a player placed a tile, he may deploy one of his followers, using the following rules:
When a player has deployed all his followers, he continues to play tiles each turn.
A player is never allowed to retake one of his followers from a tile, although they are returned when roads, cities or monasteries are finished.
Then, the player's turn is over. After, in clockwise order, the next player takes his turn, followed by the next one, and so on until you are finished. 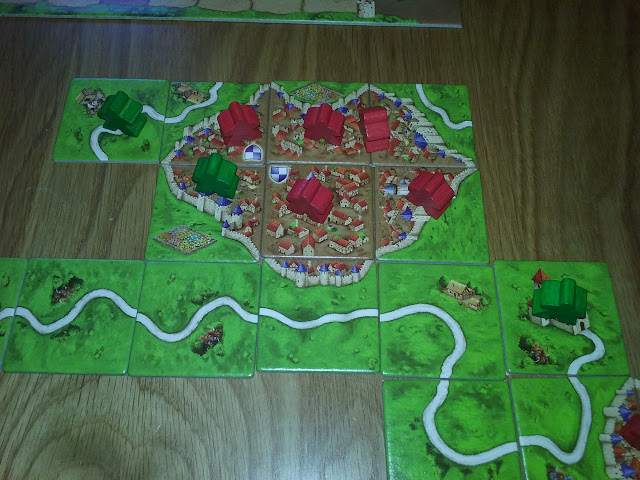 As you keep drawing tiles you begin to create a world, which will of course be different each time! 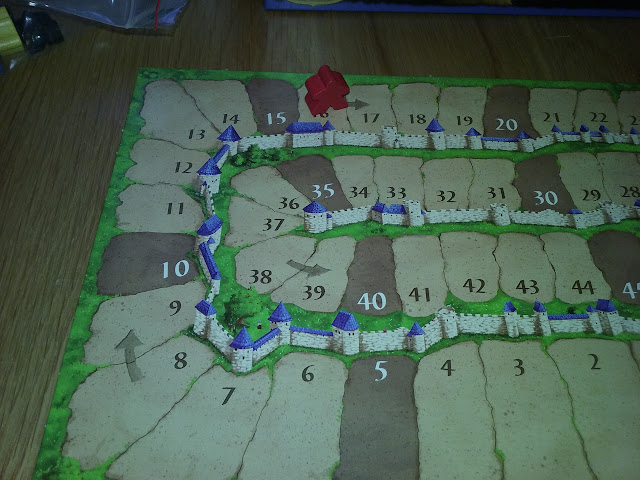 When a player scores points, he moves the scoring marker forward on the scoring track the number of spaces equal to the points earned.
If the scoring marker goes beyond 50, put the marker on its side to indicate that you now have more than 50 points.  Normally a game is played until all the tiles have been used, but we played our first game as first to 50 points.  Olivia was Red, and yes... she smashed me!

A road is complete once both ends of the road are connected to a crossroad, a city section, a monastery or the road loops onto itself. There may be many segments along the road.
The player who has a thief (or highwayman as we liked to call him) on a completed road scores 1 point per tile used in completed the road.

A city is complete when it is completely surrounded by walls and there are no gaps in the walls. There may be many segments in a city
.
A player who owns a knight in a completed city scores 2 points per tile used in the city. Each shield or banner in the city gives the player 2 bonus points.

After completing a road, city or a monastery the followers used in the scoring are returned to their player's supply and can be used again on other tiles later to keep getting points. 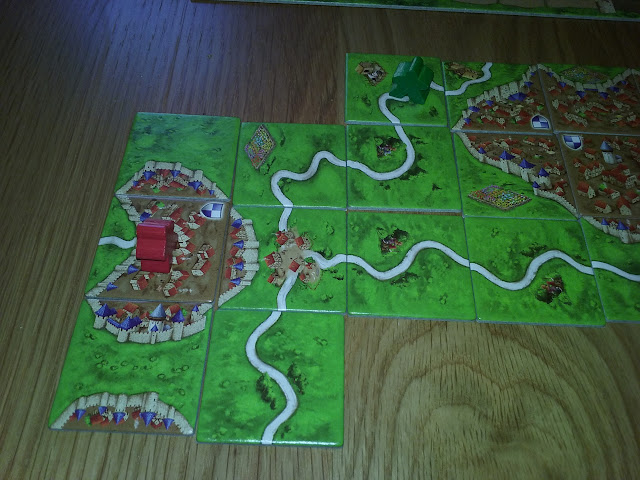 Connected fields are called farms and they don't score during the game. Farms are bordered by roads, cities and the edge of the area where the tiles have been played.
You can deploy followers on them and they become farmers which scores in the final scoring.
So, farmers stay for the entire game on the fields and are never returned.

Farmers score points as shown below: 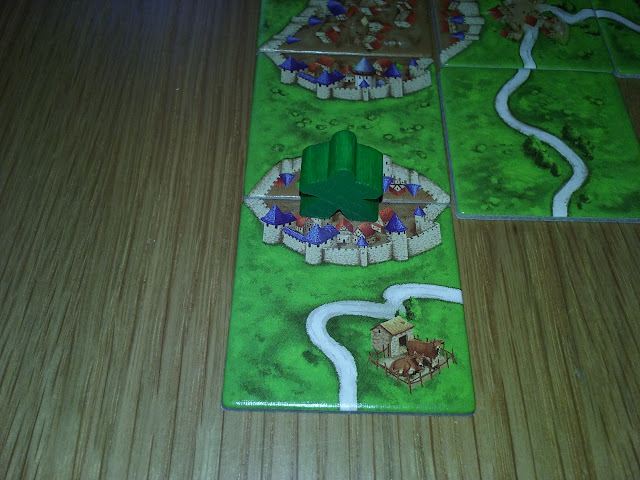 I managed to sneak a small city in! with 2 points for each city tile this only gave me 4 points, but I needed all I could get with Olivia smashing me in points. 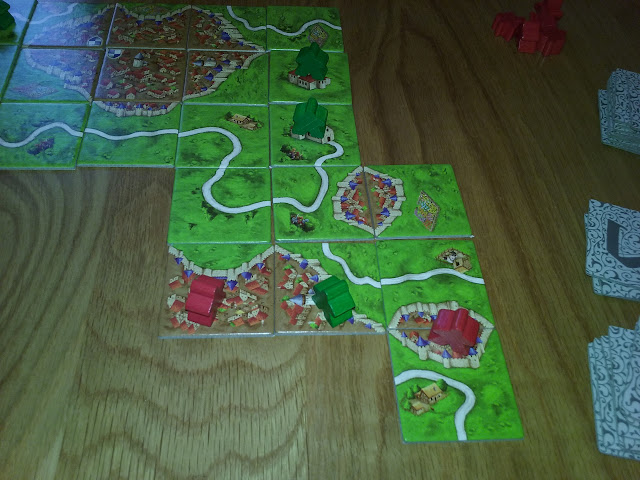 Im going for some monasteries here, while Olivia keeps her City dominance on. 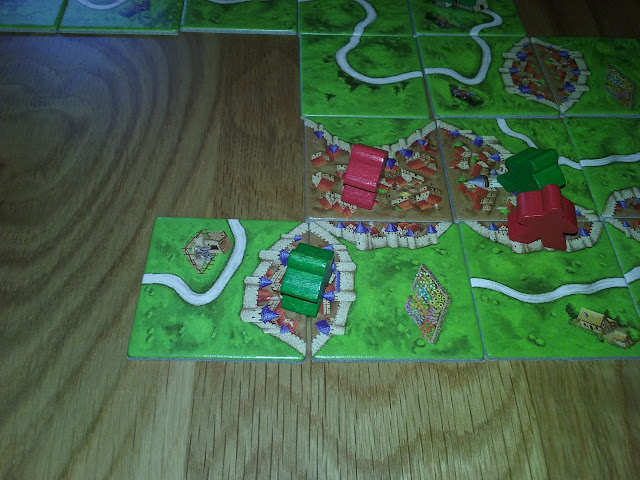 I took a cheeky 4 points, need all the help I can get. 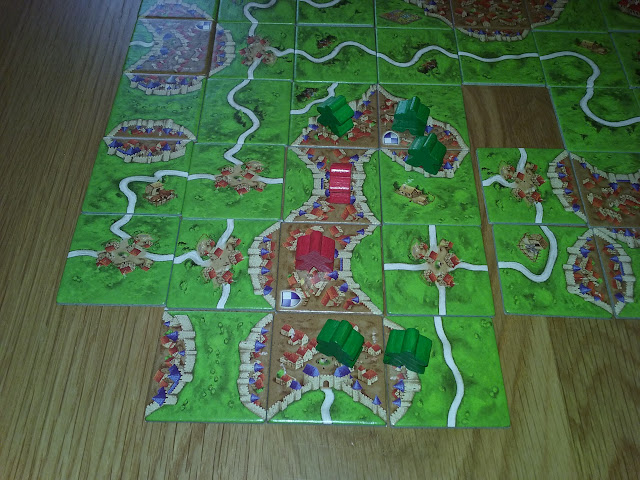 The cities can become sprawling, but the way the cards are designed means there's huge variety and replayability in the game. 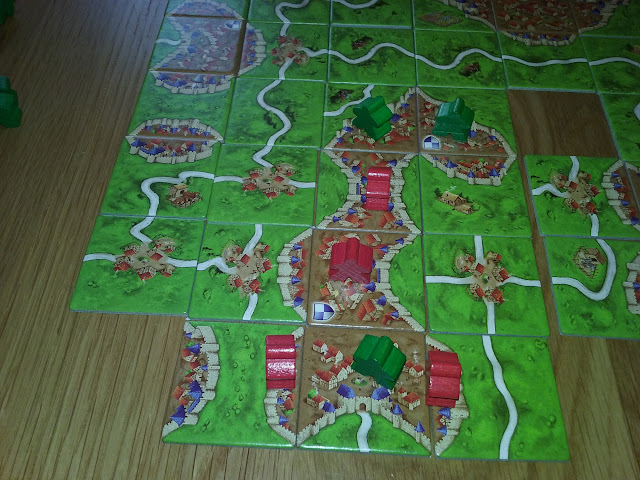 Crushed on my first game, but... as soon as we where done Olivia asked for another game so that is a good sign, and gives me a chance to get a win.

All in all, I really enjoyed the game, its simple to learn, fast playing and is fun.  The sheer amount of variety you can get out of it is almost endless as different combinations of tiles come up and you build off in different ways, letting you try different strategies to win.  Introducing this to players who have never dabbled in gaming should be a breeze, and I am sure they will love it, as it has a great visual look to it.

" I  was not sure at first, the cover did not look too exciting to me, and the name was hard to read, but when I saw how the tiles went together I liked it! I like to build my own cities and take control of them, its fun building your own world, its like a game on the ipad but better as I can win and move my little people around.  I like this game a lot, its really fun and was not hard to learn it."


With an RRP of £27.99 this game will provide hours of fun so head over to your local game store and grab a copy. and take a looka t the huge range of expansions currently available to enhance your experience.