The TIE Advanced x1, or TIE/x1 was an advanced prototype starfighter touted as a replacement for the standard TIE Fighter tested by Darth Vader and X1 at the battles of Yavin and Mustafar respectively. While it never made it into production, many of its best design features were later incorporated into the TIE/sa bomber and TIE/IN interceptor. Further development of the Advanced continued, eventually leading to the TIE Avenger and TIE Defender.

The TIE Advanced x1 featured a Sienar Fleet Systems I-s3a solar ionization reactor and paired P-s5.6 twin ion engines like the original TIE Fighter. However, the x1 had an original spaceframe, with an elongated rear deck and reinforced durasteel-alloy hull. The x1's most important innovation was the use of "bent-wing" solar array wings, like those used on the TIE/sa bomber, which had the advantages of increased surface area for more power while also reducing the craft's profile, compared to the TIE/LN starfighter's hexagonal panel wings. 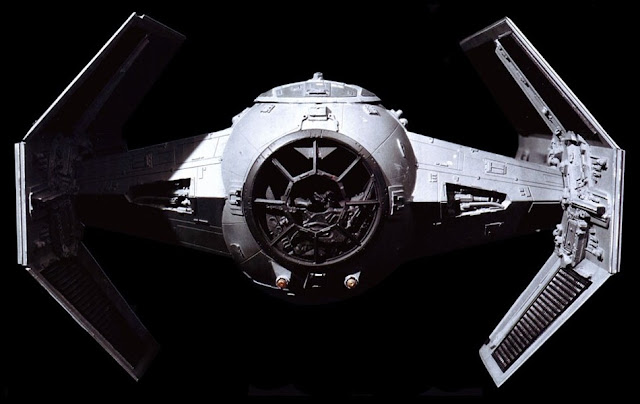 Speed was only slightly improved due to the added mass of the vessel; a good deal of the extra power was bled off to the deflector shield generators. While less manoeuvrable than standard TIE fighters, it was more resilient in battle.
The 9.2 meter-long craft had twin heavy L-s9.3 laser cannons in a fixed, front-mounted position, as well as a cluster missile launcher. In addition to its shields, it had a modest Class 4.0 hyperdrive but no life support systems. The target tracking system was also more sophisticated than the already formidable advanced targeting system on standard TIE craft, used to overcome the extremely powerful electronic jamming used by all combat craft to defeat target lock in battle. For best performance, the targeting system of the x1 required frequent adjustment in combat.
Only the most elite Imperial pilots flew the TIE Advanced, and the starfighter was capable of fighting a T-65 X-wing starfighter to a draw. 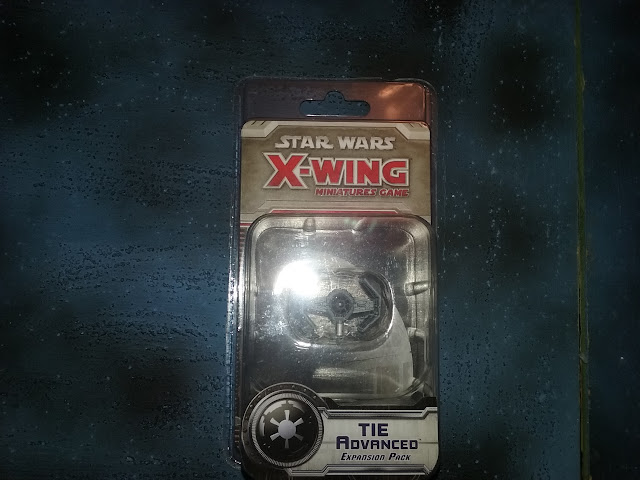 Lets Take a look and see what you get to bolster the forces of the Empire.

Being Fantasy Flight Games, you get Tokens, plenty of them in a couple of nice quality card slabs that punch out all the tokens you need. 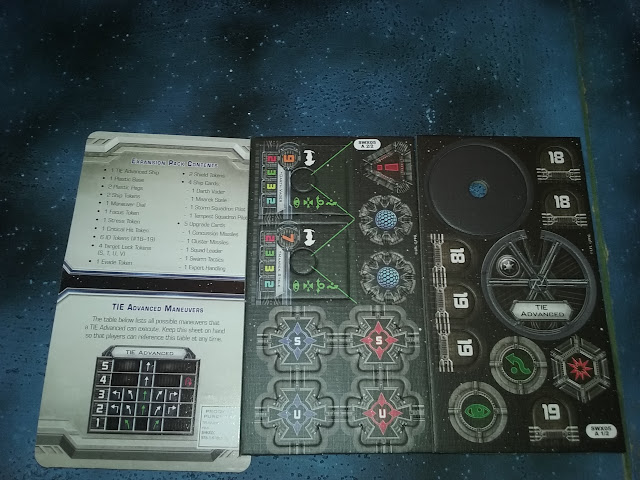 then onto the pilots, we get Darth Vader. with pilot skill 9, and an amazing ability, he is the stand out of the pack.  It is worth it for him alone.  Then we have Maarek Stele. At skill 7 he is still respectable.  His ability allows you better options from the critical hits you inflict as you draw 3, and pick 1. 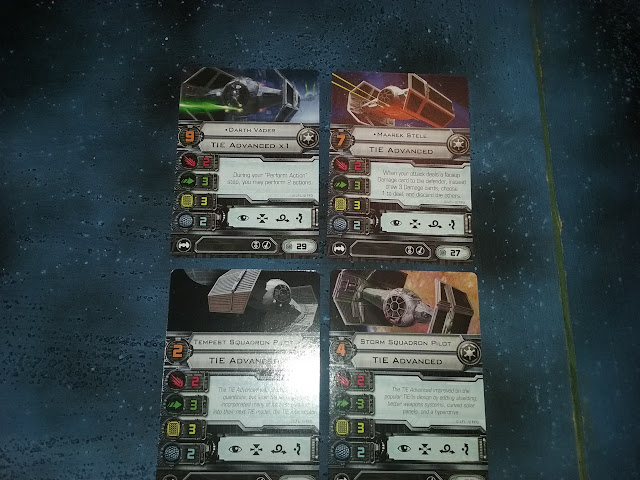 Then to round it off we have the Storm and Tempest Squadron pilots. 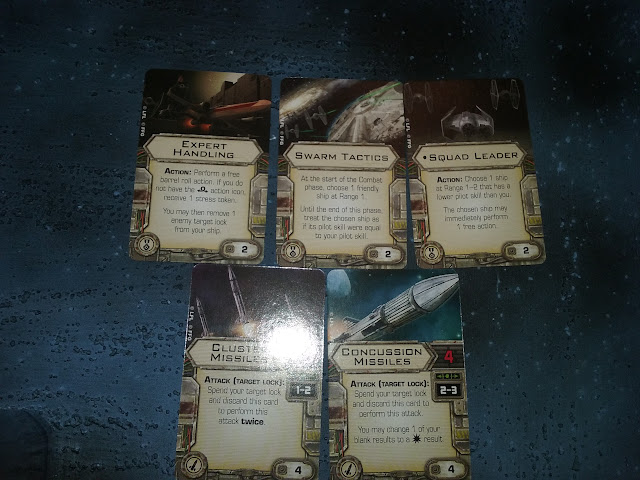 For upgrade cards we get Cluster Missiles, these are powerful missiles that attack twice for 3 dice each, so very useful when your base attack is only 2.  Concussion Missiles are a 4 dice attack, that can convert a blank into a hit, hopefully helping your conversion rates.  Three Elite Talents come in the pack.  Expert Handling is an action that allows you to perform a barrel roll to remove an enemy target lock from you. Squad Leader is great, it allows you to put an action on another ship that needs it, letting other ships take 2 actions if need be.  Combined with Vader this is a great upgrade.  Lasly we have Swarm Tactics.  With this you can bring other ships pilot skill up to your level, another good one for Vader to buff up those Academy pilots. 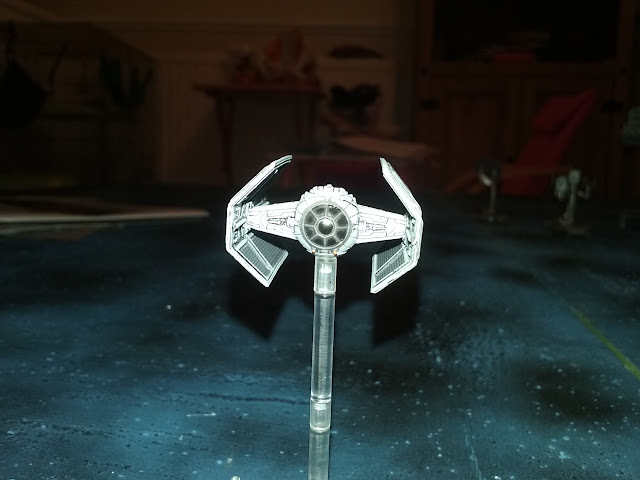 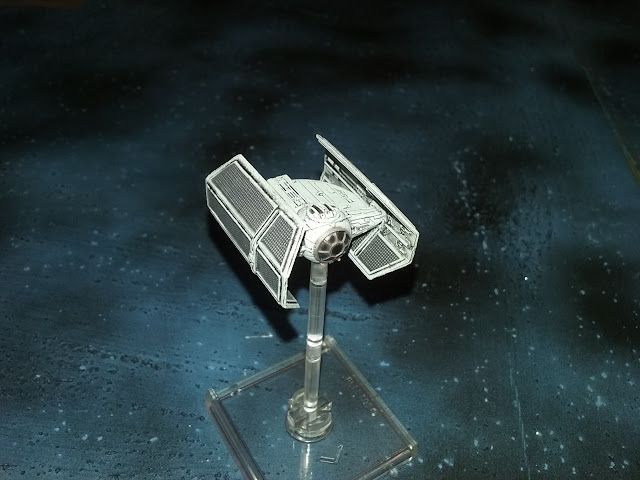 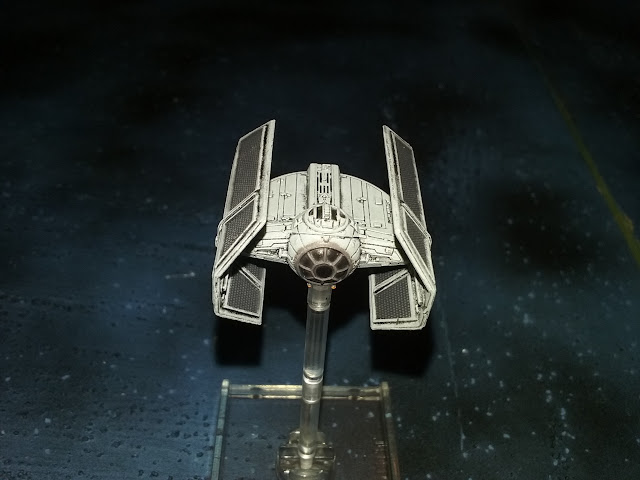 It looks good from every angle 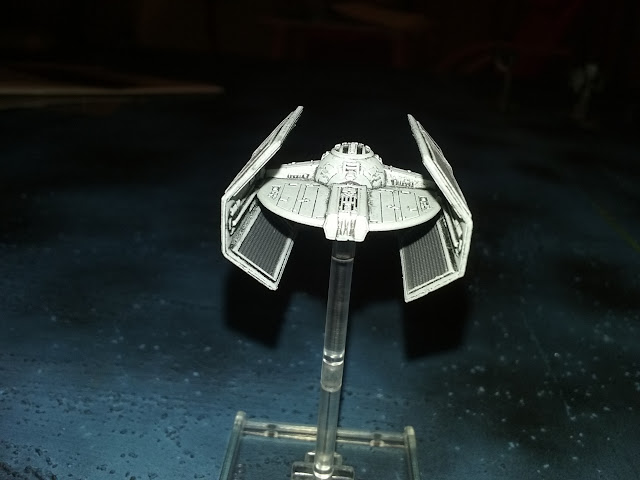 Overall a great pack for the most powerful Imperial pilot out there. A must Have if your faction is the Empire.