Battle Cry is a game designed by Richard Borg, who designed the "Command & Colours" series, so if you are familiar with any of those games you should know roughly how it plays, if you are not you are in for a treat as its a great little system. 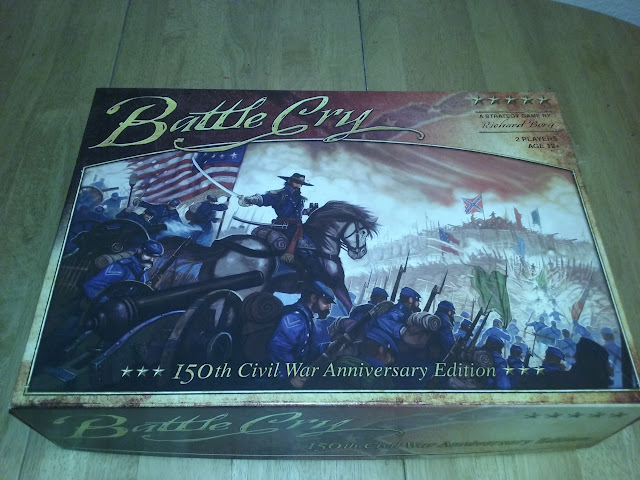 It comes in a hefty box, with some nice eye catching artwork, it states 2 players and recommends ages 12 and up, though Olivia can play it no problems. 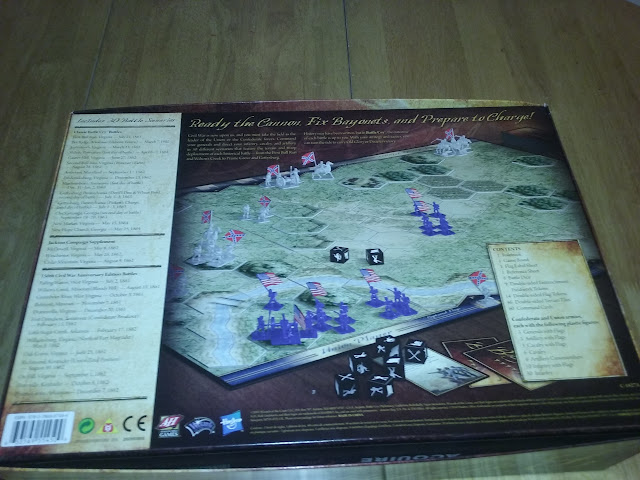 On the back it lists the 30 scenarios it comes with... yes 30! you will certainly be getting plenty of replay out of this game as with the card system no battle will play alike.

So what comes in this massive box? 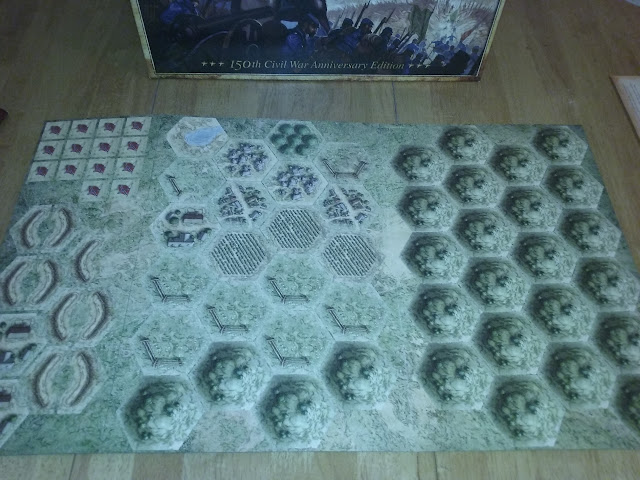 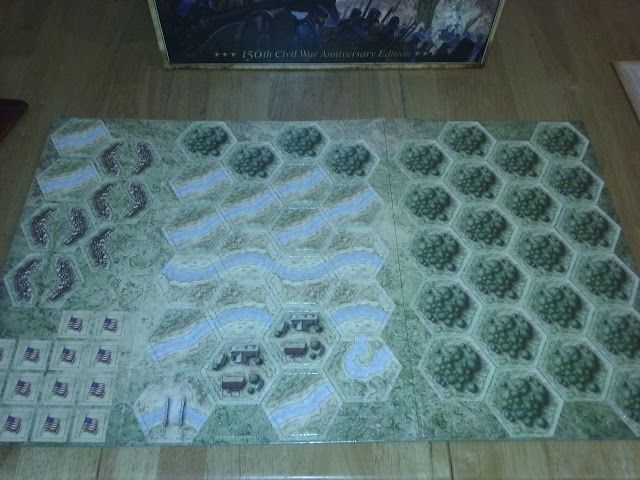 Being double sided it really increases the amount of options you have for your battle field, with everything from orchards, to hills, to rivers, entrenchments, fences, and more, all explained in a handy quick reference sheet as to what impact they have. 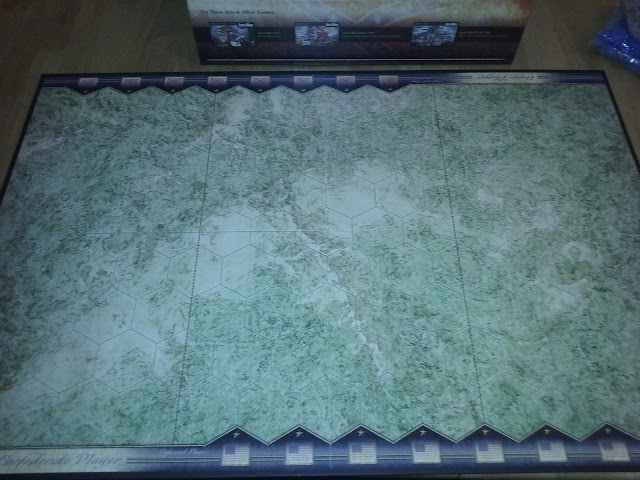 Then the board itself, you will see it has nice art, but is very plain, which is where the hexs above come in, allowing you to add variety to the battlefield, and also to set up each of the 30 scenarios that come with, as each of them give you the layout of the board, and forces involved.  You can see it has thin red lines that split the board into three sections.  When you play you will have a hand of cards that specify things, you can play one card per turn, perhaps you may play a scout on the left flank card, meaning you can only move the specified amount of units on the left flank, or an assault in the centre. Each card will also tell you how many units you can move in each section.  you can move then battle, or just battle it is up to you, though some units like artillery can only move OR battle. 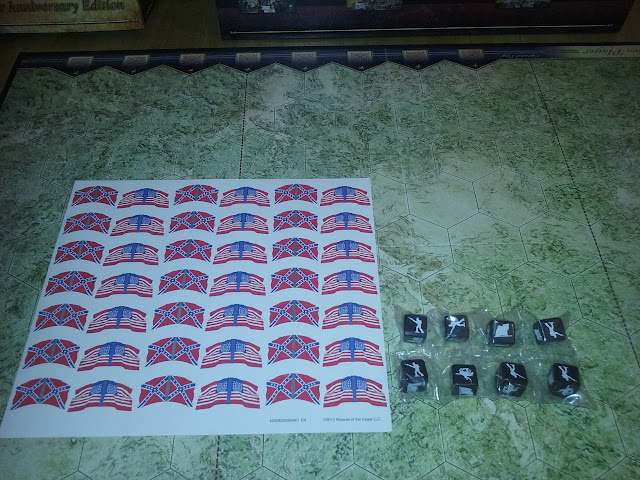 You get a sheet of flags or "Colours"  and a selection of dice, these are 6 sided, but have symbols instead of numbers on them. 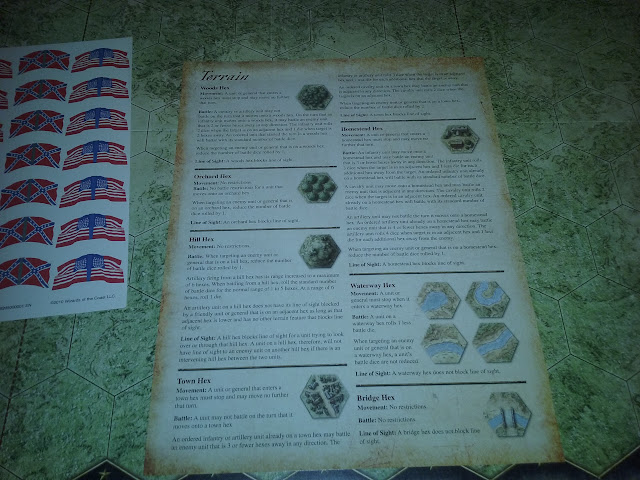 Here we have the quick reference sheet for terrain, telling you what effects it has on line of sight, movement and battle. 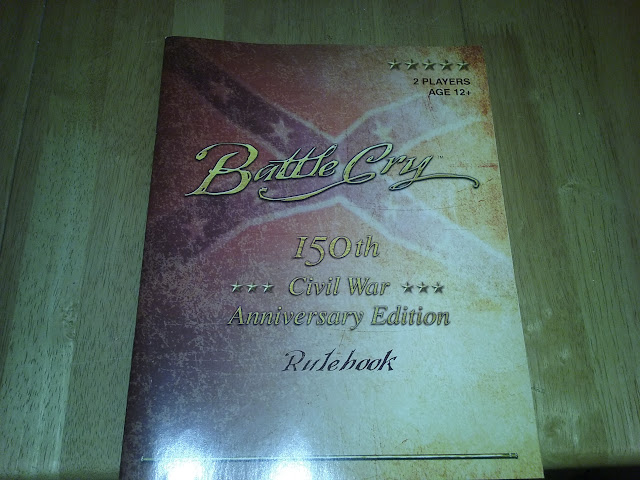 You also get a glossy colour rules book that contains the main game rules and all the scenarios. 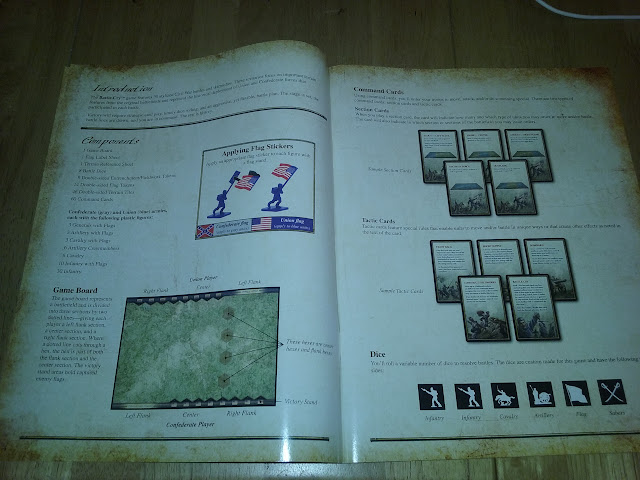 It is a very simple game to learn,  and well explained in the book, so you can teach someone in minutes and be playing right away. 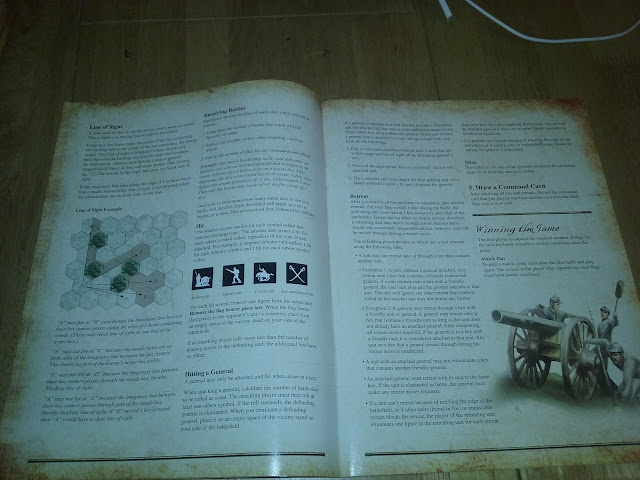 It is full of clear colour examples of line of sight, and what you need to do to play, making it easy to digest. 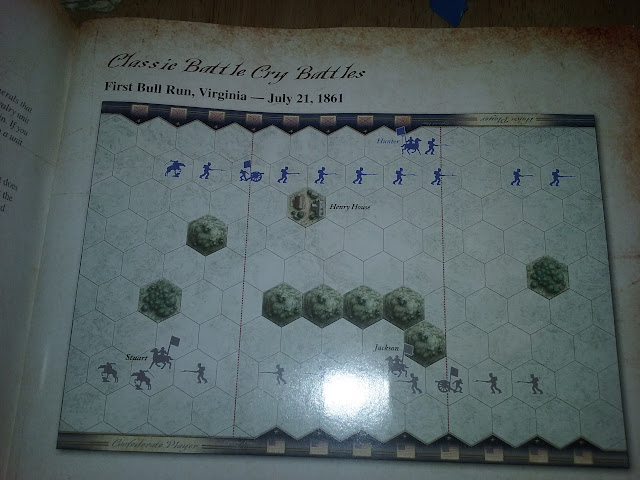 An example of how it shows you to lay out the battle field for scenarios.  Each battle also includes what actually happened to give you an idea of the history. 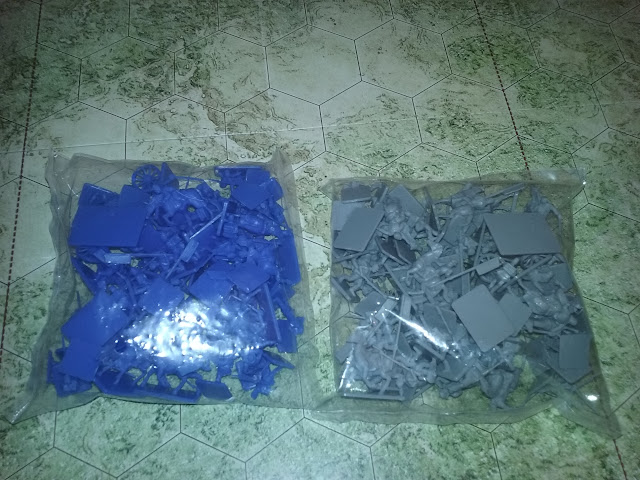 Then you get two bags of plastic soldiers, this takes me back to my youth, they are simple one piece cast models, approx. 1/72 scale, cast in blue for the Union, and grey for the Confederate forces. 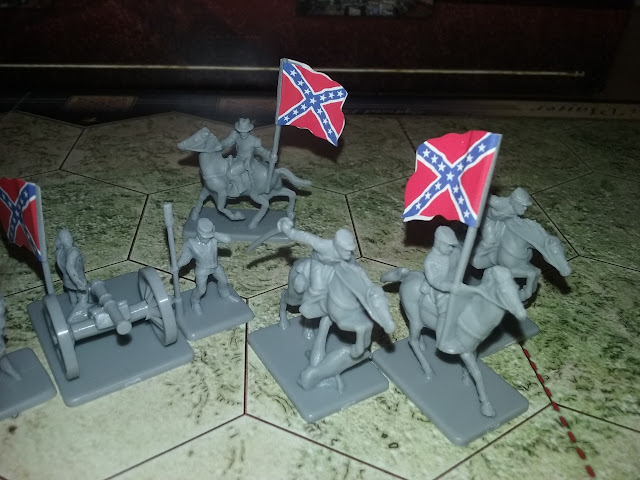 Once you have applied the flag stickers to them they look rather nice, as simple board game pieces, do not go expecting war gaming quality minis, though with some paint these would be fine as they are hard plastic models. 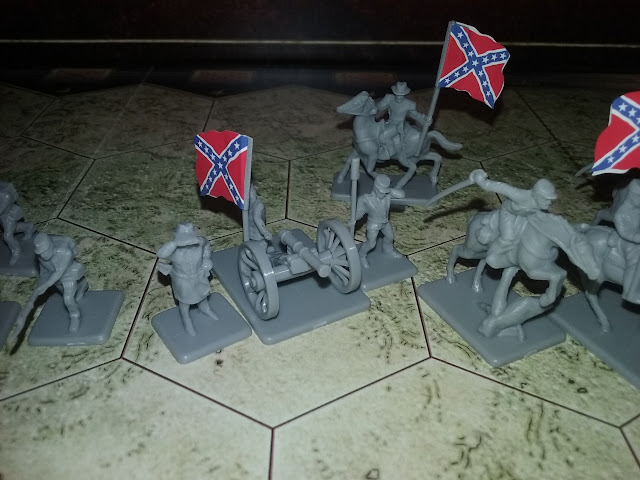 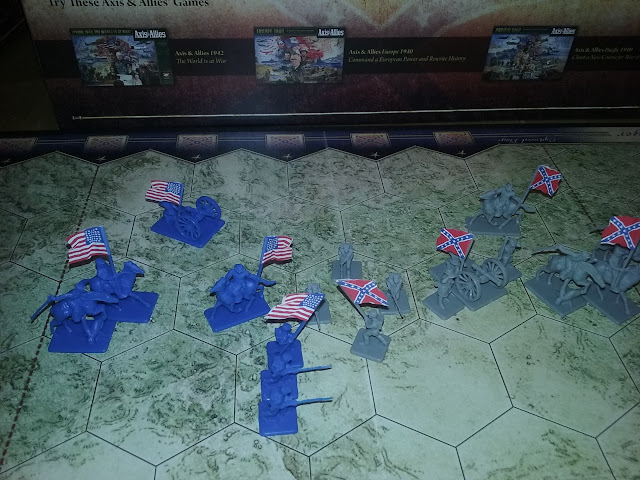 the models for both sides are all of the same pose, which is not really a problem for me. 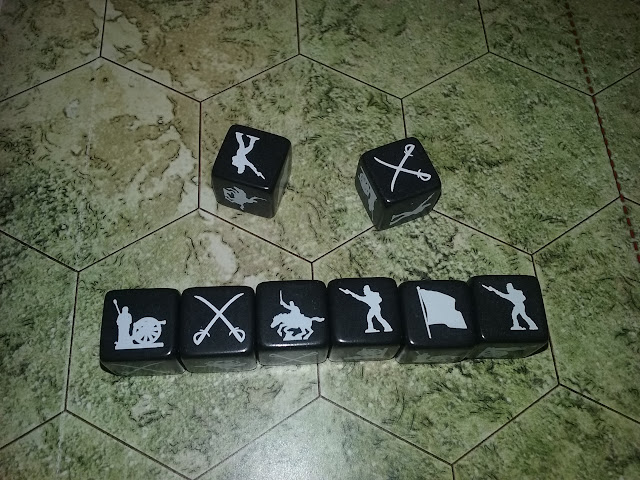 when you attack you roll a number of dice equal to your battle rating, which is effected by terrain and range, and must roll the symbols matching your target, so if you are attacking an infantry unit, you are looking for the infantry symbols, cavalry symbols for cavalry and so on.  Sabres count as a hit against whatever you are attacking, and flags force the enemy to retreat one hex for each flag rolled (though terrain and generals can limit that).  Its a nice easy system as you are not having to reference a chart of oh I hit on a 3, but long range makes that a 4, and cover makes that a 6 and so on.  cover in this game reduces dice rolled not required hits. 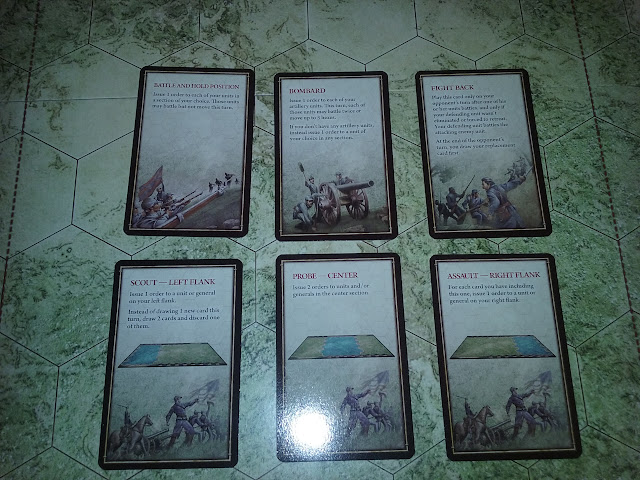 You also get a deck of cards which you will be playing from in the game.  The scenario tells you how many to draw to begin, and each turn you play one and draw one.  There are also event cards like Bombard that let your artillery fire twice, and some other nice surprise ones too.  As you can see above the rules for each card are clearly laid out on it letting you know what to do.

The idea to win is to capture a certain amount of your opponents flags, which is laid out in the scenario you are playing.  You gain a flag by destroying the unit completely and then take the colour bearer and put him on your victory tracker.

Some gamers do not like the "random" element the command cards bring, but I do, it feels like the fog of war, where you do not have the ability to react exactly where you may want to each turn.  It forces you to think carefully about your moves, and I really enjoy the system, it makes it fast, fun and easy to learn and play.

When you have finished it all packs away nicely too! 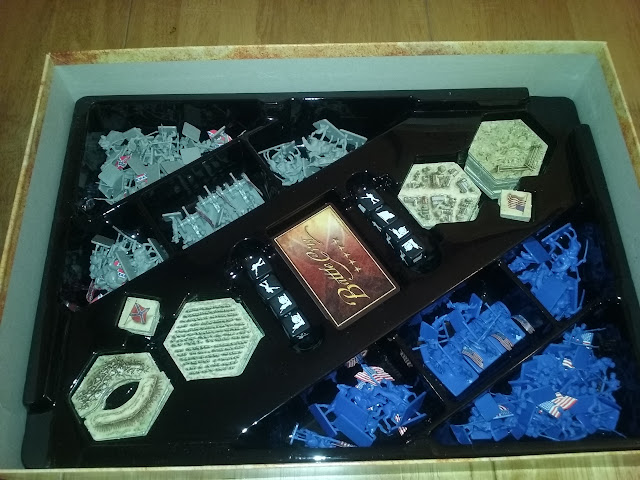 Overall, its a fun system, fast to learn, faster to teach, quick to play, and more importantly fun.  The battles look great set up, like being a young child again and there is something about pushing plastic soldiers around that just sets of the nostalgia factor for me.  Add to that rolling dice, and the command decisions needed by using the cards you have an excellent game.  With 30 scenarios the replay factor is superb as well, so you will  get your moneys worth out of this set. 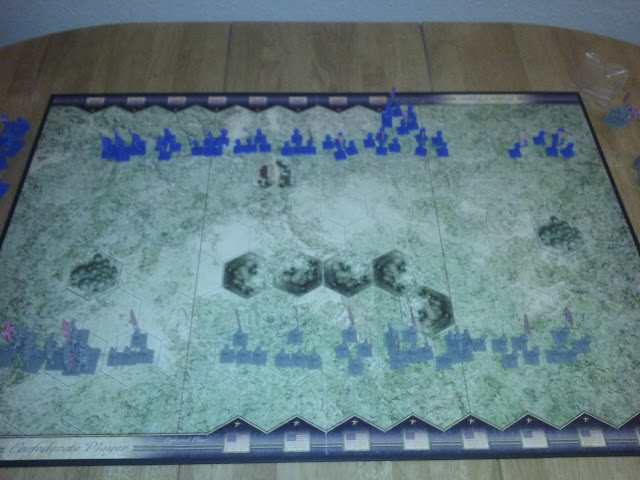 The first battle of Bull Run is set up here, and me and Olivia are about to dive into it, so watch out for a future battle report to see the game in action.

Come and join us in all sorts of gaming chat in our Facebook group here, and come follow us on Twitter @rollyoursix join the chat, and tell us about your games!
Labels: American civil war Battle cry