Today we get a look at a new addition to the Federation arsenal, with the Delta Flyer Shuttle.
The Delta Flyer was a specially designed Starfleet shuttlecraft constructed by the crew of the USS Voyager in the Delta Quadrant in 2375. The vessel was designed to handle environments that would be too hazardous for a standard shuttlecraft and to be slightly larger than the average shuttle, the crew having acknowledged that standard shuttles were of little use in the increasingly hostile and unexplored Delta Quadrant. 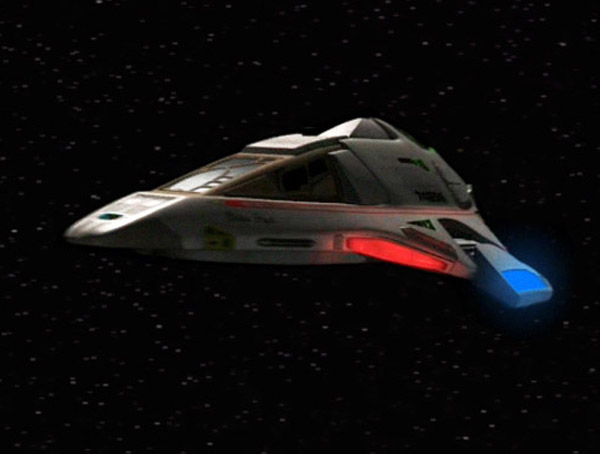 The vessel was a blend of Starfleet and Borg technology, designed in collaboration between B'Elanna Torres, Tom Paris, Tuvok, Harry Kim, and Seven of Nine. It featured a warp-streamlined tetraburnium alloy hull, retractable warp nacelles, parametallic hull plating, unimatrix shielding, and a Borg-inspired weapon system, including photonic missiles, most of which were Paris' conceptions. For aesthetic reasons, Paris designed some of the flight controls to resemble those from the holodeck simulation of Captain Proton; when Tuvok complained, Paris explained that he wanted to feel the ship and that he was tired of tapping panels. But to Paris' disappointment, the addition of dynametric tailfins was denied by Tuvok. Instead of having the usual two pilot stations, it had several command stations 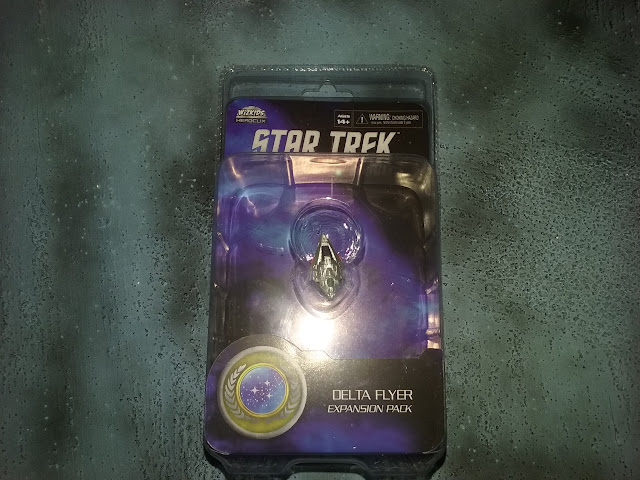 Lets see what this pack adds to the game 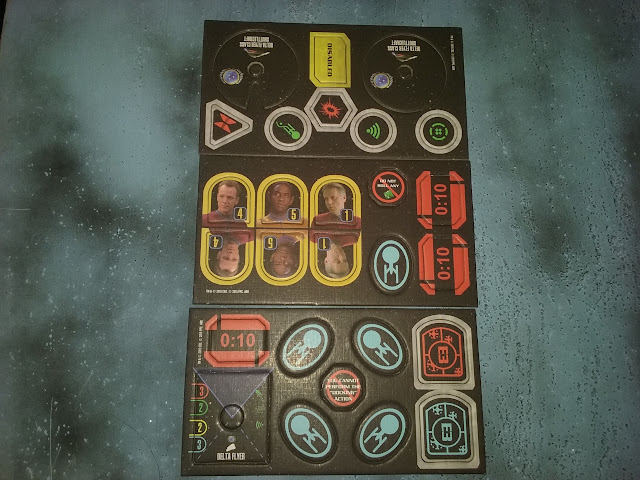 As always, some great high quality tokens, all that you will need for the ship including time tokens. 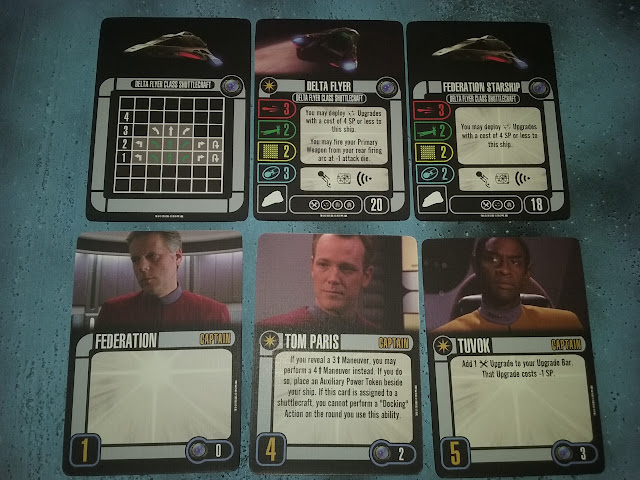 The ship is hugely manoeuvrable, though not the fastest as like all shuttle craft it can go at a maximum of speed 3, but with no reds on the dial this thing can shift about easily to be where you need it, just a tad slower that's all.  The named Delta flyer has average stats, more then some ships in fact! with a good attack for its size, but low hull.  It lets you equip secondary weapons of 4 points or less to it unlike other shuttles, and it also lets you shoot your primary weapon out the rear arc though at minus 1 dice, its still very nice.  As always we get a generic version, and a generic captain as well.  Named captains we have Tom Paris, at skill 4 for 2 points he's nice and cheap, and lets you push the ship to speed 4 instead of 3, though at the cost of an auxiliary power token, it does stop you docking though if you use it which is one of the shuttles ability's.  You can dock and deposit and move around upgrade cards with a shuttle which is fun.  Tuvok is skill 5 for 3 points, and adds a tech upgrade to your bar, which with this little ship is great! he also reduces the cost of that upgrade by 1 point. 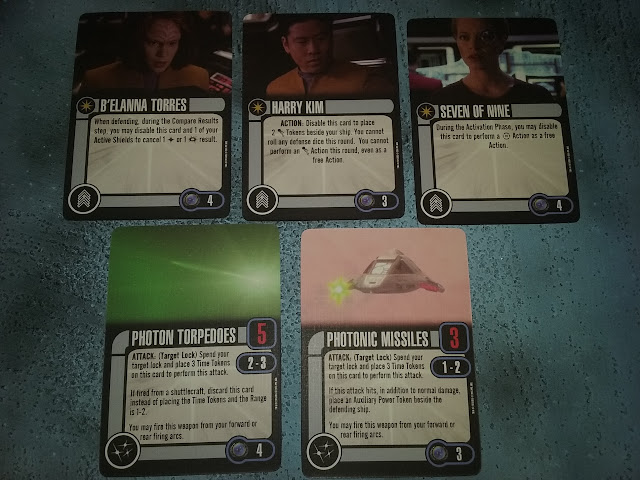 For Crew we have different versions of ones we have already seen.  B'Elanna torres lets you disable her and an active shield to cancel a hit or critical hit.  Harry Kim is an action to disable him and give yourself 2 evade tokens though you can not roll any evade dice.  Seven of Nine can be disabled to provide a free battlestations action which is handy as the ship does not have one naturally, so this can allow you to make sure your shots count when you need it,  Photon torpedoes are a weapon upgrade to provide a whopping 5 attack for this ship, I like that it has the time tokens on for normal play, or if fired from a shuttle craft its range is reduced and it is discarded, so its a one shot weapon on this ship, but you can of course play it on other Federation ships you have.  Photonic missiles are the other weapon in the pack, at 3 attack dice and range 1-2 they let you put an auxiliary power on your target, and can also be fired from the rear arc.  They do have time tokens so will recharge with out an action. 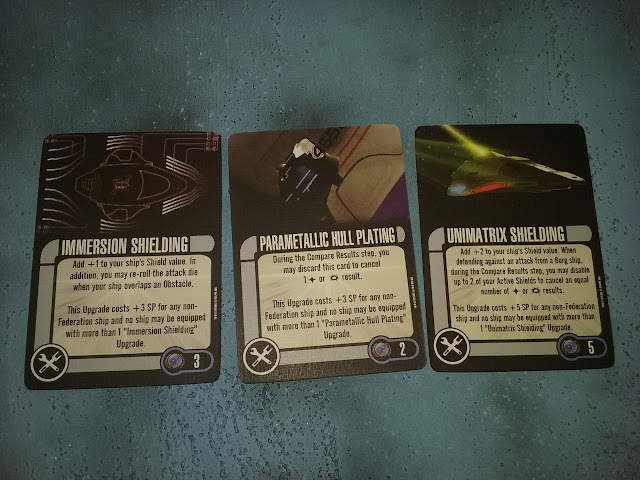 The Tech upgrades in this pack are excellent, we have Immersion shielding which adds one shield to your ship, and lets you re roll the dice when you overlap obstacles giving you more chance to avoid that hit.  Parametalic hull plating can be discarded to cancel a hit, or a critical hit, which can be very helpful keeping you alive, and for only 2 points its a bargain.  Unimatrix shielding adds 2 to your shield value, and allows you to disable them to cancel hits against Borg. 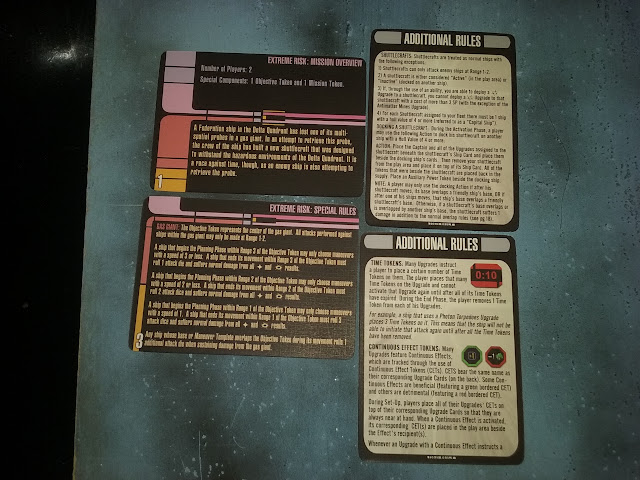 You get the rule cards on time tokens, and how shuttles work, so you never need to worry about having to download new rules for your game.  The mission is Extreme Risk, a 2 player mission to test your ship in. 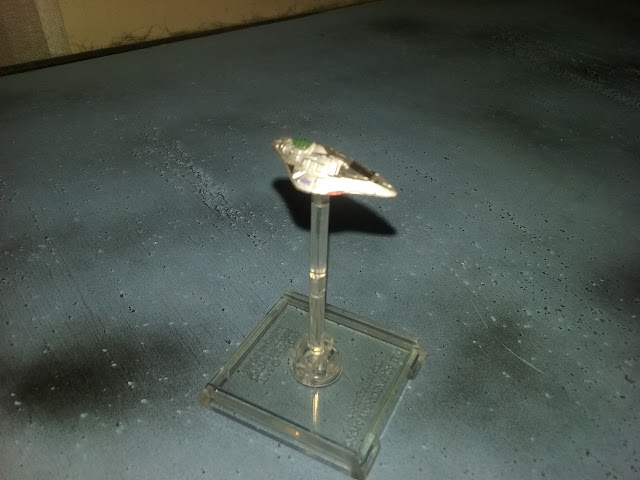 The model is tiny, really small as you can see, but then it is a shuttle craft.  The paint job is good for Wizkids, and their is plenty of detail on it. 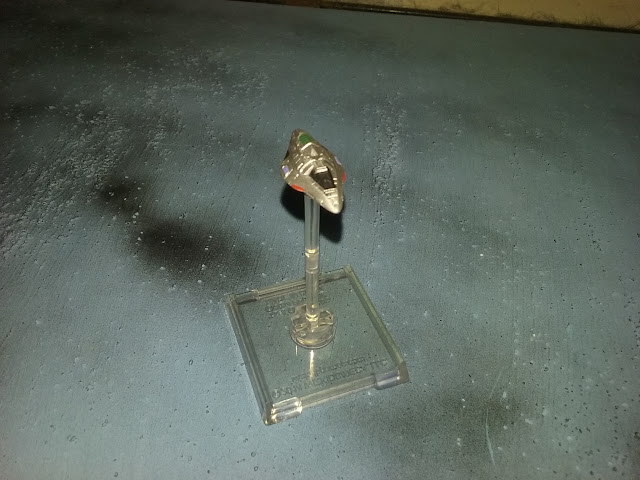 Even at such a small size the ship is recognisable for what it is. 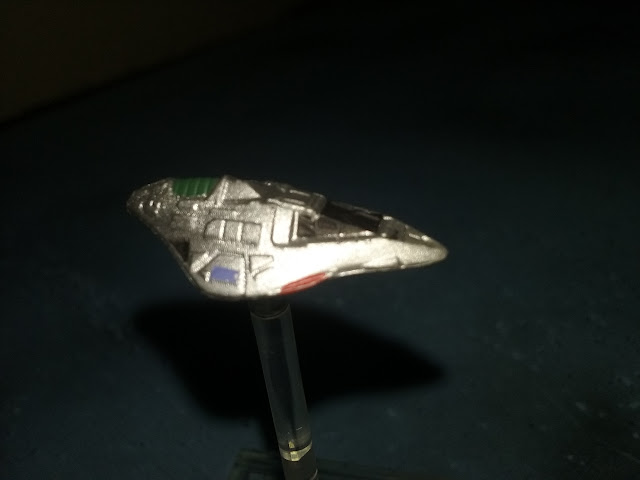 You can pick one up by finding your local game store here with an RRP of £11.99 it will add a great ship and solid cards to your fleet, that as a Federation player are a must have! try those shields on the likes of the Enterprise to make it a beast!, even if you do not, the ship itself is great fun, and will add another excellent mission to the game.
Labels: Attack Wing Star Trek unboxing