Today we look at one of the latest releases for Star Trek Attack Wing.

The USS Hathaway (NCC-2593) was a 23rd century Federation Constellation-class starship operated by Starfleet. This ship was launched in 2285 from the Copernicus Ship Yards on Luna, and was equipped with Avidyne impulse engines.
In preparation for Operation Lovely Angel in 2365, the Hathaway had been stripped down and was towed to the planet Braslota II in the Braslota system. While in orbit, the ship was temporarily reactivated for a Starfleet battle simulation, in which USS Enterprise-D first officer William T. Riker commanded the obsolete cruiser against the state-of-the-art Galaxy-class starship. Although the Hathaway was running on minimum power, had only a few shards of dilithium, and no antimatter fuel, Riker's away team managed to reactivate the ship and place it in sufficient condition for simulated combat in only 48 hours. 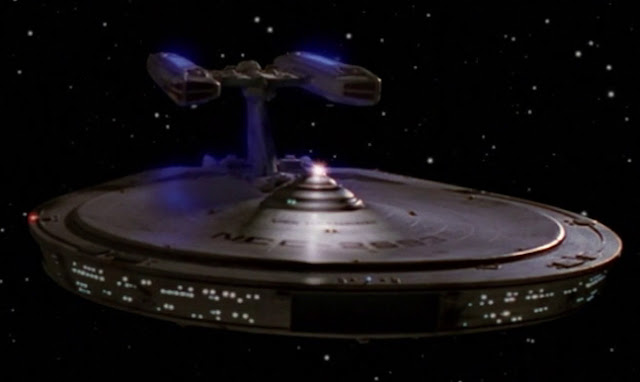 Unfortunately, the battle simulation was interrupted by the intrusion of the Ferengi Marauder Kreechta, whose DaiMon believed he had stumbled into a Starfleet internal conflict. Thinking that the Hathaway must be of great value to be fighting against a modern starship (and not realizing the battle was simulated), the Ferengi demanded the Hathaway's surrender. The two Starfleet crews coordinated a ruse, however, in which it was made to appear as if the Enterprise destroyed the Hathaway to prevent it from falling into enemy hands. In reality, the Hathaway had merely made a split-second warp jump the instant before the photon torpedoes detonated. Its potential prize destroyed, the Ferengi retreated. Following the exercise, the Hathaway was towed to the nearest starbase. 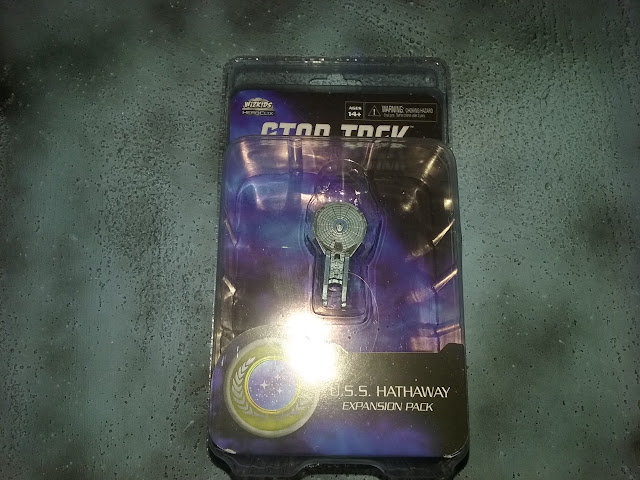 Three years later, the Hathaway was rushed into service to serve in Captain Jean-Luc Picard's fleet. The fleet was tasked with blockading the Romulans from delivering supplies to the Duras family at the Klingon-Romulan border during the Klingon Civil War.

Lets see what comes in the pack to add to add to the fleet..... 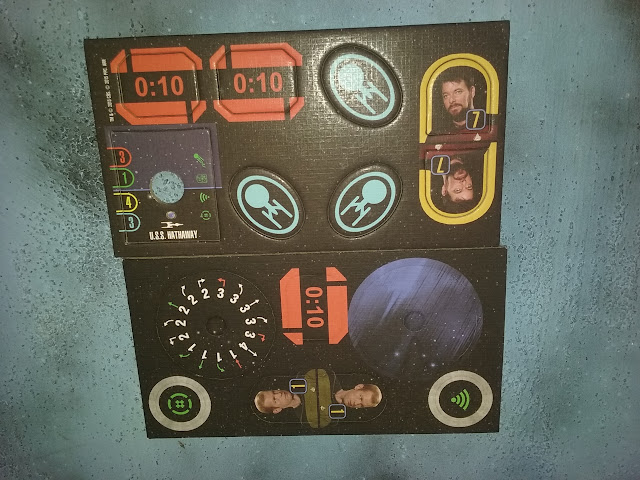 As always we get all the relevant tokens in nice quality card, including the new time tokens.  Time tokens go on a weapon, or piece of tech, and are removed turn by turn.  When they are gone you can use the upgrade again.  The card state how many tokens to add. 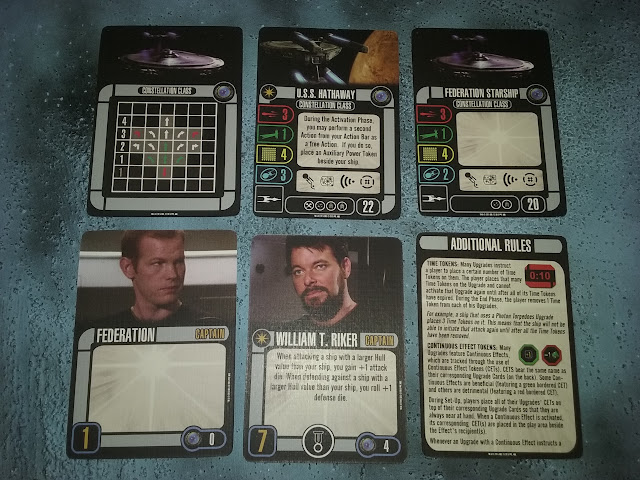 The Constellation class is relatively nimble for a federation ship, with a good range of moves, and even a reverse to surprise your opponent.  The Hathaway has average stats across the board, nice and solid with the usual federation action bar of scan, target lock, battle stations and evade.  Her named ability lets you perform a second action as a free action, though at the cost of an auxiliary power token.  This is very handy, and can pull you out of trouble at times, or prepare you for a harder hi on your target.  You also as always get a generic ship and captain.  The only captain for the pack is William T. Riker.  At skill 7 he is no slouch, and he has an elite talent slot available.  His ability is innate and gives you an extra attack dice when attacking a ship with a larger hull value, and also an extra defence dice when defending against a ship with a large hull value.  This card is very much in theme of the episode and of course Rikers fighting spirit.  You get a handy additional rules card explaining Time Tokens, and continuous effects so you need not worry about knowing any new rules as they are all covered. 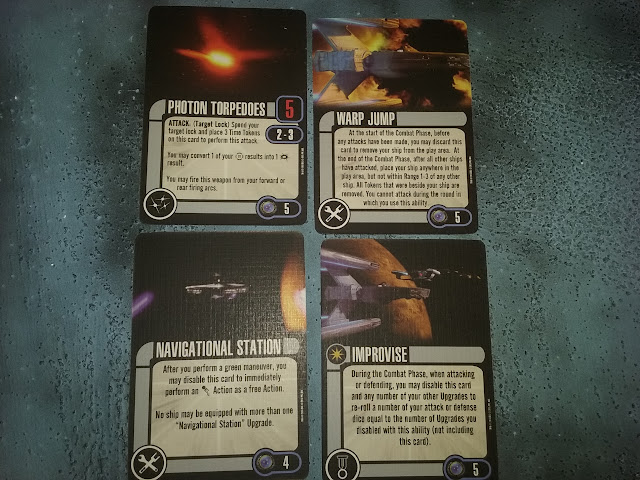 To provide some more punch we have Photon Torpedoes.  They give a nice 5 attack dice hit, with time tokens to recharge.  Warp jump takes a tech slot, and allows you to jump out of play and back in again anywhere in the play area so long as you are not in range 1-3 of any enemy ship.  Its very useful to reposition yourself to get out of a tight corner, or to prepare yourself to strike.  Navigational station us the other tech in the pack, after a green manoeuvre you can disable it for a free evade action.  Combined with the Hathaways native ability it allows for some neat tricks when you need it.
The elite talent of the pack is Improvise.  You can disable it in the combat phase whilst attacking or defending to re-roll a number a number of attack or defence dice equal to upgrades on your ship.  Used at the right time this can help you finish your opponent off, or survive to fight again. 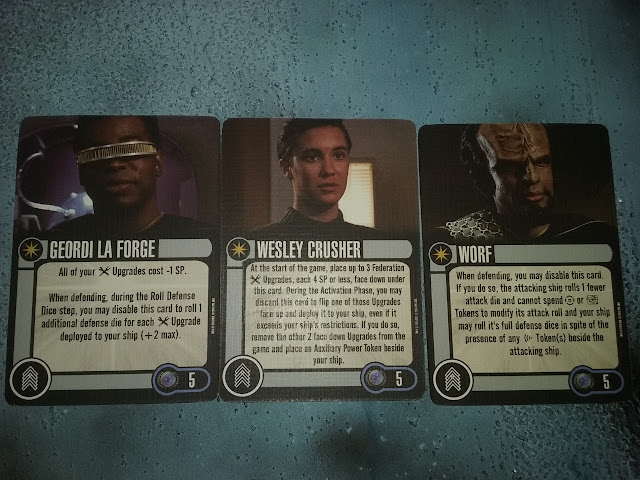 In the crew slots we have another version of Geordi La Forge.  He reduces your tech upgrades costs by 1, and you can disable him whilst defending to roll an additional defence dice for each tech you have equipped.  We get another version of Worf, again he helps whilst defending can store up to 3 tech upgrades, you then discard Wesley to flip over and deploy one of the tech upgrades to your ship, discarding him and the other two. You do get an auxiliary power token from this, but it allows you to save the right tech for the right moment so he can be very useful.  I think there needs to be a house rule that each time he is used you must declare "Shut up Wesley!" 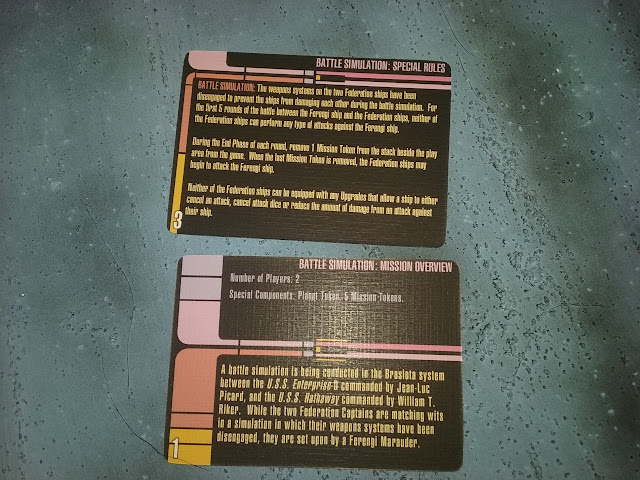 The mission for this pack is Battle Simulation, and is based strongly on the episode this ship comes from featuring the Enterprise D and a Ferengi ship this mission looks to be both fun and thematic, and I have all the ships needed.. perhaps a battle report in the future..... 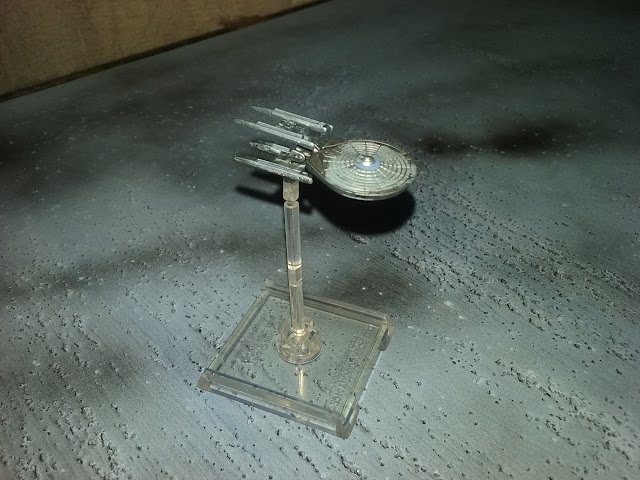 The ship model is nicely detailed, and a good rendition of the Constellation class, which is a favourite of mine since I first saw the Stargazer (which I still hope for in retail format) 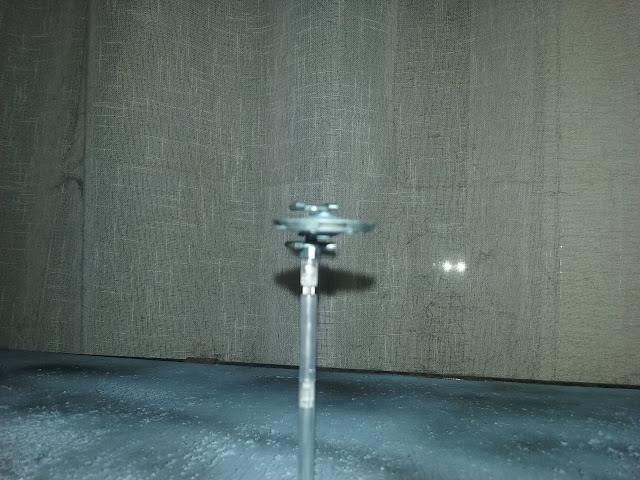 It appears that they have tried wish putting a wash on the ship, and it does make it look like the 80 year old workhorse that the Hathaway is. 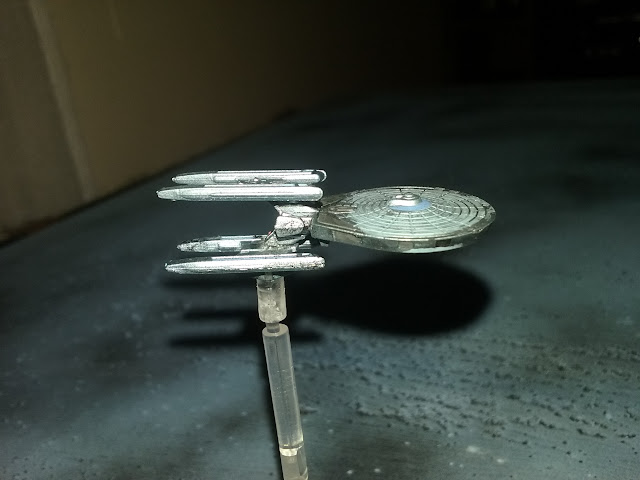 This is a great thematic pack, from one of my favourite episodes.  The cards have a synergy and all work together well to buff your ship.  If you are a Federation player this is a must have ship!

You can pick one up by finding your local game store here with an RRP of £11.99 it will add a great ship and solid cards to your fleet.