Up until now, the Federation and the Dominion where the only factions that had fighters.  The arrival of the Romulan Scorpion class has now changed that.
The Scorpion-class vessels were small attack fighters stored aboard the Reman warbird Scimitar in 2379. 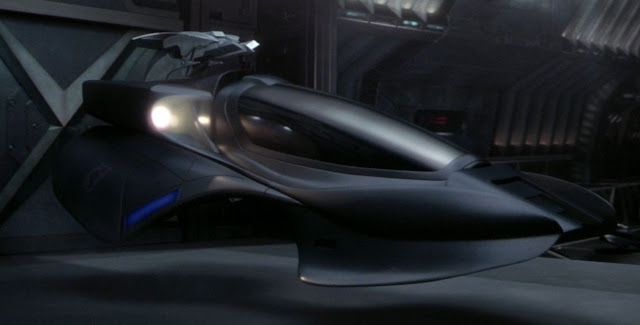 When Captain Jean-Luc Picard was captured and taken aboard the Scimitar by Praetor Shinzon, the captain and Data used a Scorpion-class vessel to escape, taking the fighter through the Scimitar's corridors when the shuttlebay doors were sealed to prevent them making a more direct exit. Although he initially found the craft difficult to maneuver, he eventually managed to drive the vessel through a window located in Shinzon's representative chamber and escape into space, where the craft was beamed aboard the USS Enterprise-E.
The Scimitar's shuttlebay, where the Scorpion-class vessels were stored, was later destroyed when the Enterprise and the Scimitar collided 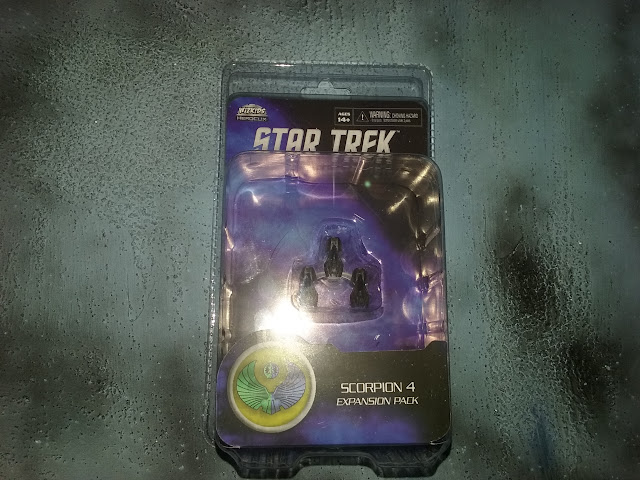 Lets take a look and see what these fighters add to the Romulan forces.... 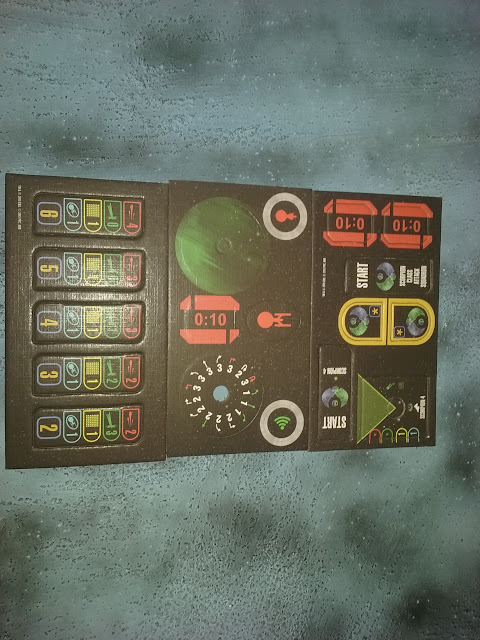 As always plenty of Tokens, more then usual with the way fighters operate. 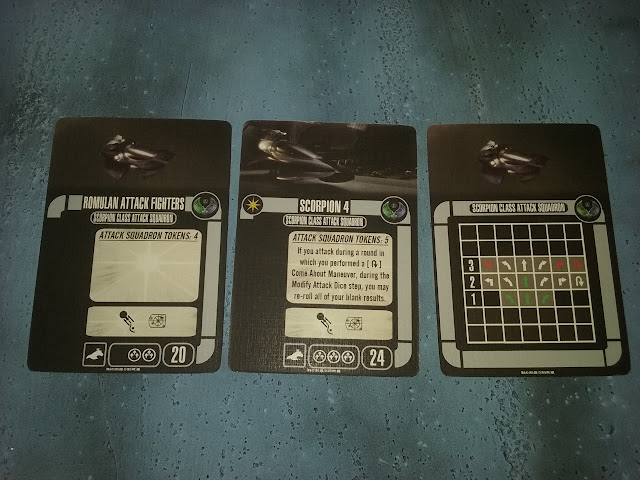 You get a generic squadron, and the Scorpion 4 named squadron.  Their ability allows them to re-roll blanks after they do a come about manoeuvre, which is pretty good since that is a white move done at speed two so you can pepper your enemy with maximum firepower.  Whilst not quite as punchy as the Dominion, or even Federation fighters, these guys do have some nice tricks up their sleeves. 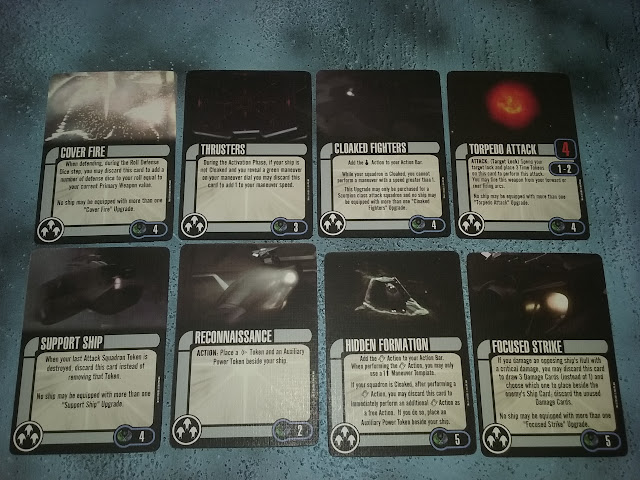 You get plenty of squadron upgrades,  Cover fire can be discarded to roll extra defence dice equal to your weapon value, is this can really help stave off those big hits.  Thrusters lets you add 1 to your manoeuvre speed, but again is a discard.  Cloaked fighters allow you to cloak, but does limit you to speed 1.  Its handy when you are up close though as those extra defence dice are going to be very helpful.  Torpedo attack lets you fire an attack 4 set of torpedoes from your front or rear arc, and takes 3 turns to recharge with time tokens.  Support ship helps you survive a little longer by being discarded instead of your last fighter card allowing you to create more mayhem with them.  Reconnaissance allows you to do the scan action though at the cost of an auxiliary power.  Hidden Formation allows you to sensor echo helping to keep those opponents in arc.  Lastly Focused strike lets you pick the critical effect from the top 3 cards, so you can pick the effect to suit and hamper your opponent most. 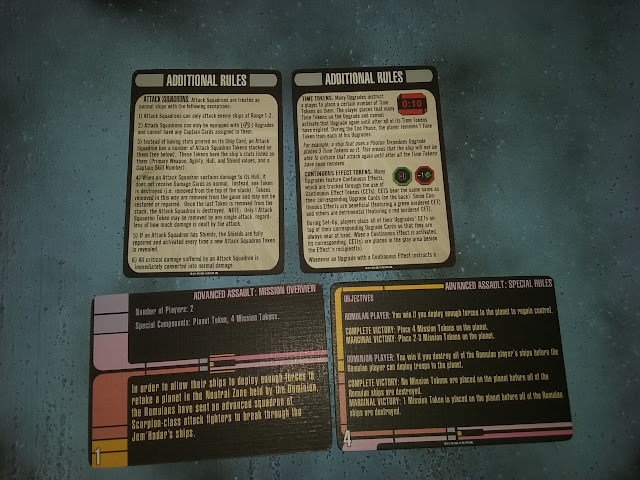 You get the rules card explaining how fighters work, so its nice and simple to learn if you do not know, and the rules for time tokens.  The Mission is advanced assault, a 2 player mission set in the Dominion war. 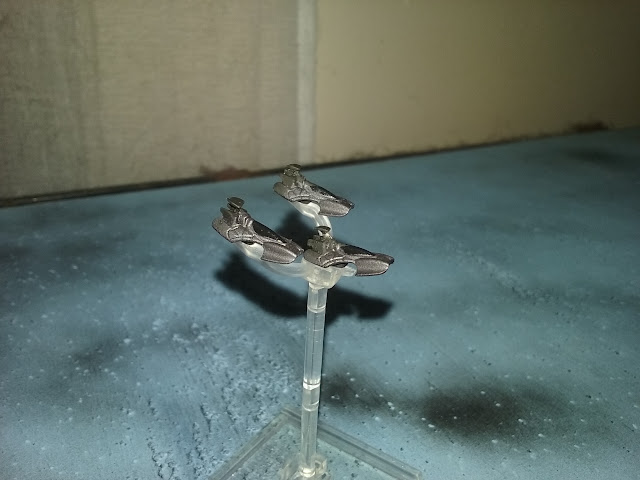 The models are tiny, as fighters are, but well detailed.  The paint job is simple and effective ad well, though an experienced painter may want to pick out the engines. 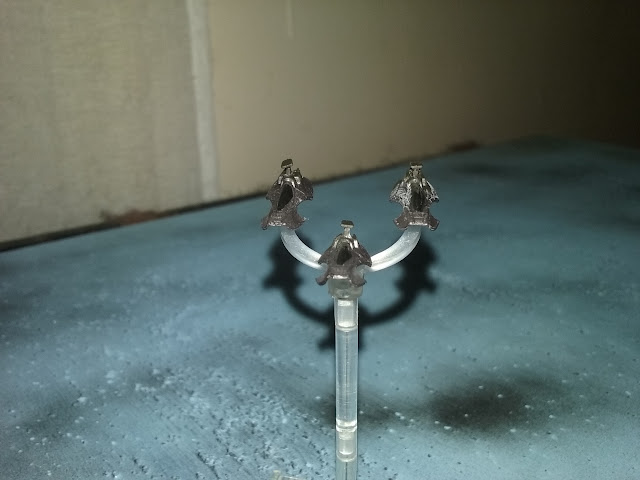 A great pack to add some variety to your Romulan fleet here, and try out fighters for yourself.
You can pick one up by finding your local game store here with an RRP of £11.99.