The Talvath was a Romulan science vessel that was in service in the mid-24th century. In early 2350, the Talvath, operating under the direction of Dr. Telek R'Mor of the Romulan Astrophysical Academy, began an extended three-year scientific mission. 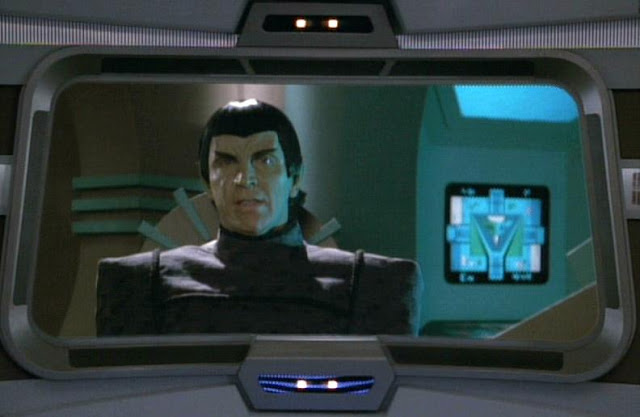 In mid-2351, the Talvath encountered a micro-wormhole in Sector 1385 of the Alpha Quadrant that led to the discovery of the Federation starship USS Voyager in the Delta Quadrant, located in the year 2371.
The Talvath was scheduled to complete its mission and return to Romulus in 2353 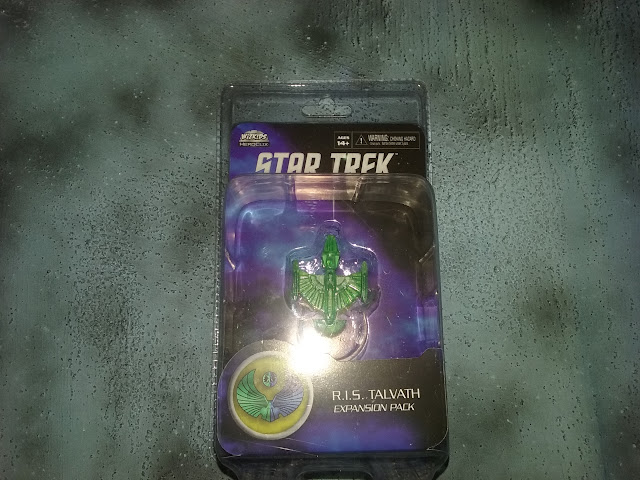 Lets see what this little ship adds to the game. 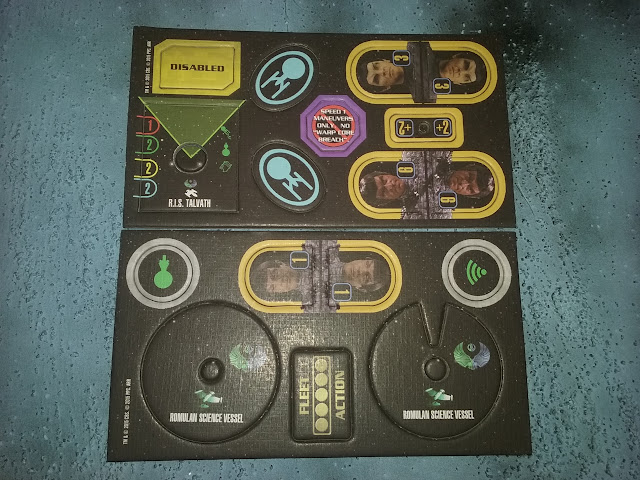 As normal, all the nice quality tokens you need for the ship are included ready for you to punch out and use. 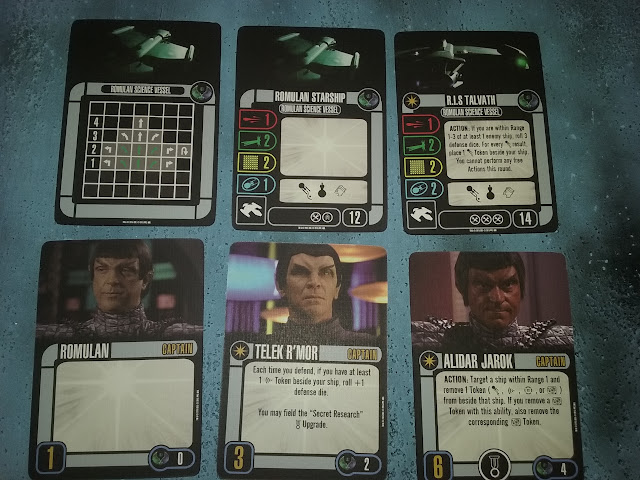 The ship is super nimble not a red manoeuvre on the dial, so you can through it around with come abouts and no consequence.  The ship has low stats all across the board, she is not a combat vessel but she is cheap at 14 points named.  The named ships ability lets you for an action roll 3 defence dice, and for any evade results you get you add the tokens to your ship for the round, which could be handy to keep you alive, since you are fragile.  You get the generic ship and captain as well as two named captains.  Telek R'Mor adds a defence dice to your pool if you have a scan a scan token.  The ship does not have a scan on the action bar I hear you ask... stay with me, this ship has ways around that.  We get another version of Alidar Jarok, who can act as captain OR Admiral form where he can remove tokens from an enemy ship at range one, letting you use the science vessel to de-buff your enemy. 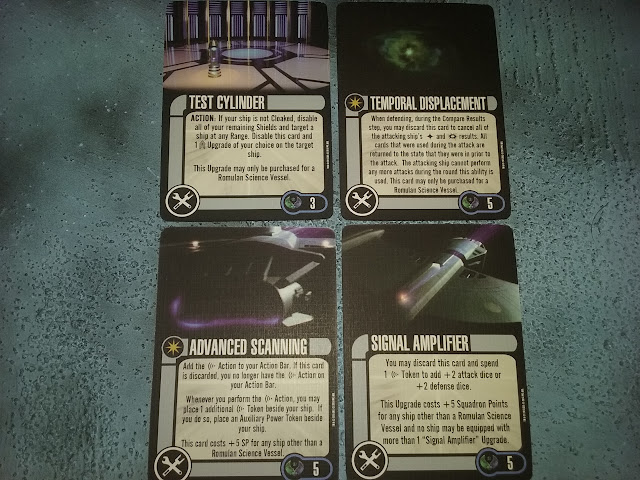 The ship comes with plenty of tech.  Test Cylinder lets you disable it and a crew upgrade on an enemy ship.  Temporal Displacement can be discarded to cancel all you opponents dice in attack letting you survive another round.  Advanced scanning adds the scan to your action bar, and you can do a double scan if you want for the cost of an auxiliary power.  Signal Amplifier lets you discard it and a scan token to add either 2 attack dice, or 2 defence dice.  This can save you timed right, or cause a nasty surprise when your little 1 attack dice ships is suddenly swinging 4 at range 1. 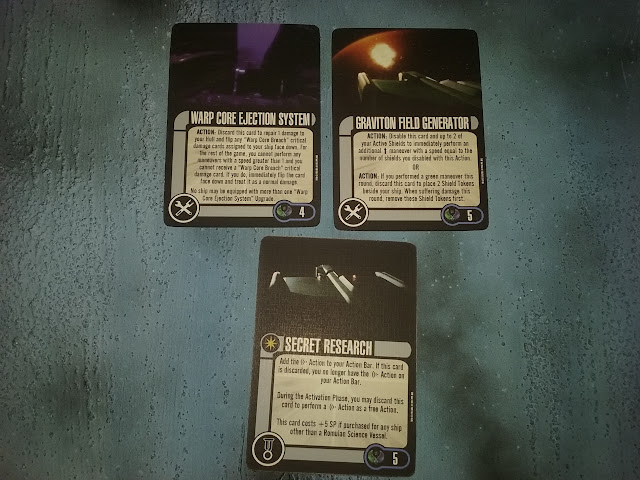 Warp core ejection system repairs 1 damage to your hull and gets rid of the warp core critical effect, though you can only move at speed one then.  Graviton Field Generator is an action to disable it and any number of your shields to perform an additional straight manoeuvre at speed equal to he shields disabled, or you can discard it to add 2 shield tokens to your ship.  Secret research is the elite talent of the pack, and it adds a scan action to your action bar.  You can also discard it for a free scan action. 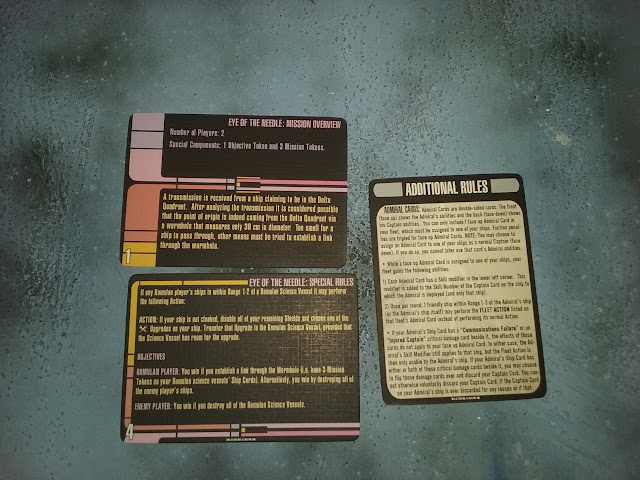 The Mission is the eye of the needle, and comes from the episode you meet the ship in Voyager, where your science vessel is working on the anomaly and needs to be defended. 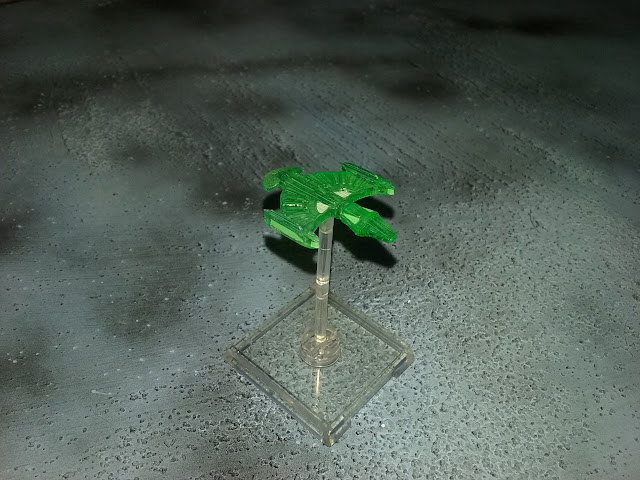 The ship is the same model as the previous one, though cast in a translucent green plastic, its full of detail, and looks great, like its beginning to cloak. 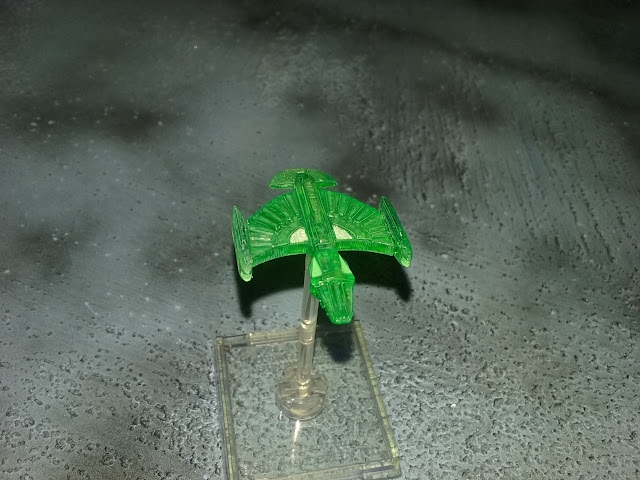 The painting on it is nice and neat, but the main effect is the cloaking look and its nice and effective. 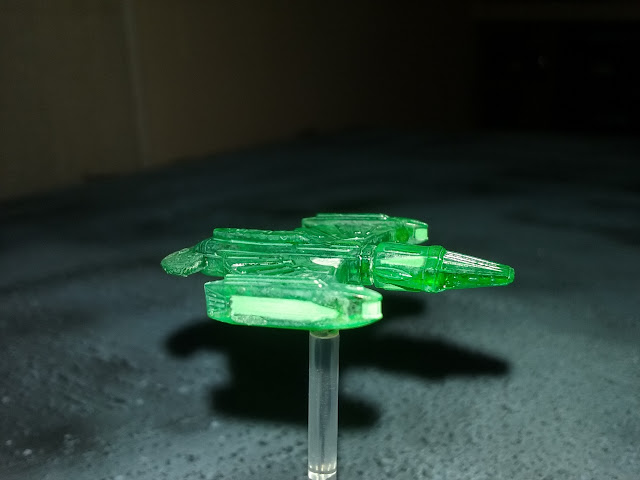 You can pick one up by finding your local game store here with an RRP of £11.99 it will add a fun little ship with a good thematic mission to your collection.