In our first faction focus we look at House Stark.  We will be looking at their strengths, and weaknesses and some of their best cards.


Eddard Stark: "Look at me, you're a Stark of Winterfell, you know our words."
Arya Stark: "'Winter is coming'."
Eddard Stark: "You were born in the long summer, you've never known anything else. But now winter is truly coming. In the winter, we must protect ourselves, look after one another."
— Lord Eddard Stark and his daughter Arya.

House Stark of Winterfell is an exiled Great House of Westeros, ruling over the vast region known as the North from their seat in Winterfell. It is by far one of the oldest lines of Westerosi nobility, claiming a line of descent stretching back over eight thousand years. The head of the house was the Lord of Winterfell. Before the Targaryen conquest, the leaders of House Stark ruled over the region as the Kings in the North. 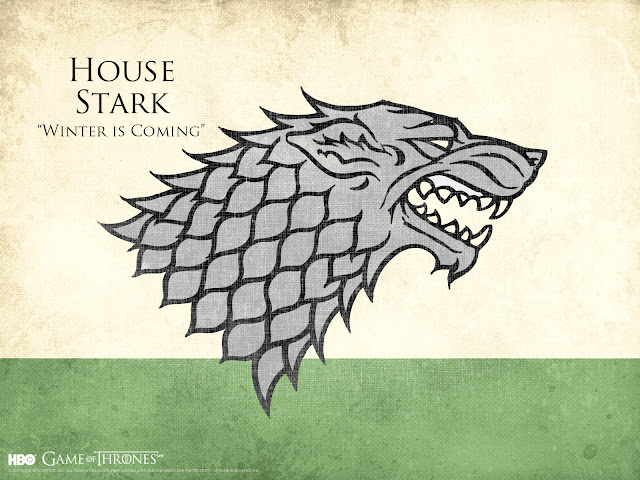 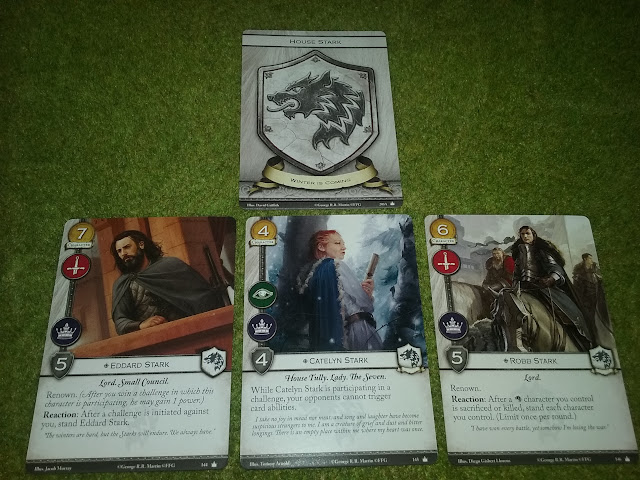 House Stark is led by Eddard.  At cost 7 he is not cheap, but he comes with strength 5, and military and power icons, which is a theme you will see in the Starks a lot, as they a lot of intrigue, which is fitting for a house as unsubtle as them.  Eddard has Renown, meaning when he wins a cahllenege he is involved in he gains a power icon on his card.  He also has a reaction, that stands him after a challenge is initiated against you, meaning you can use him on the offence, then surprise your opponents by having him stand to defend as well.  Catelyn is 4 cost 4 strength with that valuable Intrigue icon, and a power icon.  When she is involved in a challenge your opponent can not trigger card abilities locking them down.  Protect her, there are few intrigue characters in the Stark deck, and she will be needed.  Robb stark is cost 6 strength 5, again a military and power icon.  He has Renown like Eddard, and also a reaction.  When a Stark character is killed or discarded (example would be losing a military challenge) you can stand each character you control but only once a turn.  This can be hugely powerful if your opponent thinks you have nothing left to attack with as he went first, then you stand your forces on a possibly undefended assault. 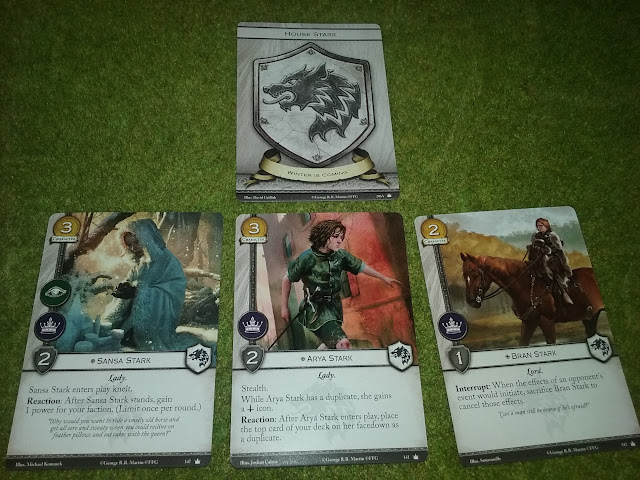 Sansa is the only other character with Intrigue for Starks, and she enters play knelt.  She costs 3, has a strength of 2 and intrigue and power icons.  With a strength 2 she will not be winning that many challenges, but her reaction ability gains a power for you each time she stands, so that could be in the standing phase, or when Robb makes the cards stand, giving you a useful power generating card each turn.  Arya is cost 3, and strength 2 with only the power challenge icon.  She has stealth though, meaning you can pick an opponent card that can not block her, hopefully making those unopposed challenges easier.  He reaction lets you take your top card and put it on her as a duplicate (an extra life) whilst she has a duplicate she gains the military challenge icon as well.  Bran stark is a cost 2, strength 1 card, with only power challenge icon.  He has an interrupt though, you can sacrifice him to stop the effects of an enemies event, which can prove vital to save other cards, and of course works well with Robb as when you sacrifice him, Robb stands all your knelt characters. 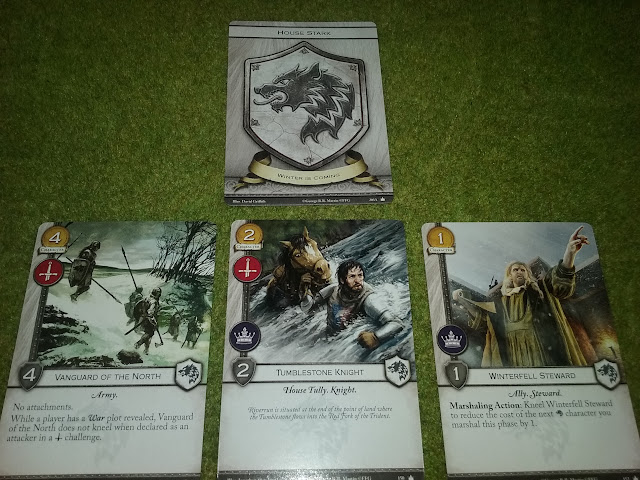 Vanguards of the North is a 4 strength 4 cost Army, with only the military challenge icon.  Its a good card for military, and even better when you have a "War" plot revealed as it does not kneel when it attacks.  Tumblestone Knight, is a nice cheap 2 cost 2 strength military and power character, good for filling out the ranks.  Winterfell Steward is 1 cost, 1 strength with only the power icon, but you will not be using him for challenges.  He has a Marshalling action that allows you to kneel him to reduce the cost of your next stark character by 1. 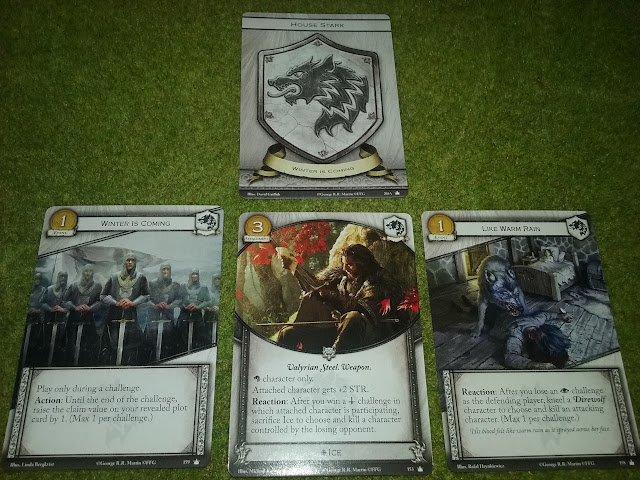 Winter is coming is an event card, for only 1 gold, that can be played during a challenge.  It allows you to raise the claim value of your challenge by 1.  Play this when you know you are going to win, or are unopposed to add that extra sting, a good card.  Like Warm rain can be brutal.... After you lose an intrigue challenge (which will happen a lot with Starks) you can play this 1 cost event, and kneel a Direwolf (there are Direwolves in the deck) to choose and kill an attacking character.... that's huge, you can potentially take out their biggest character with this.  Ice is a weapon attachment that can be given to a character it gives them plus 2 strength, and a reaction, after you win a military challenge in which the character with ice was participating you may sacrifice ice to choose and kill a character controlled by the losing player.  Any character.... that can again be brutal. 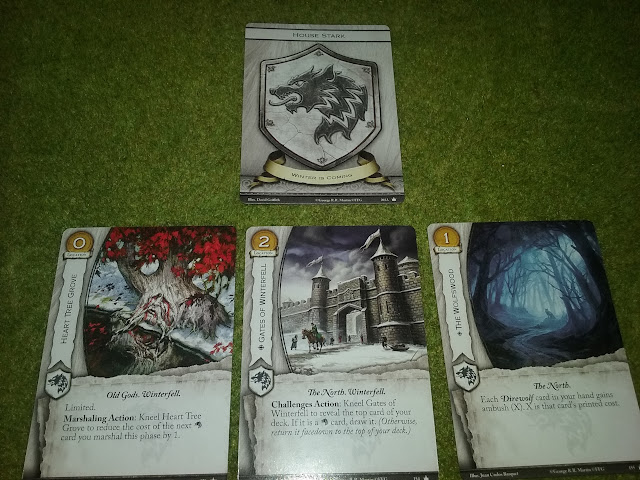 The Starks have a selection of their own locations you can play, such as the Heart Tree Grove, which can be knelt to reduce the cost of the next stark card by 1, combined with the winterfell steward you can get a nice discount.  It is a Limited card though, meaning you can only play one card with the word limited on it per turn, so think hard if this is the best one if you have others.  Gates of Winterfell can be knelt to reveal the top card of your deck, and if it is a Stark card draw it, which is handy as in a card game you always need cards!.  The wolfswood adds ambush to each of your Direwolfs, meaning you do not have to play them in the marshalling phase, you can ambush them in later, perhaps when your enemy has used all his cards thinking you are done, to provide a nasty shock.

The Starks play very simply, they go for power, and military challenges mostly, and want to crush their enemy on the field in honourably combat.  With the likes of Robb and Eddard gaining you power from Renown for combat it is a viable tactic.  Not to say the Starks do not have tricks, ambushing Direwolves can cause havoc, and events played at the right time can kill off enemy characters, but as a whole their mission will be combat and power to win the game.

To learn more about A Game of Thrones the card game second edition take a look here
Stick with us as we look at the Factions in future articles to give you an idea of how they play, and take a look at some of the upcoming chapter packs that add more to your game.