What to do, what to do? With Disney taking over the entire franchise we do suddenly find ourselves in an odd continuity predicament. Now in all fairness not all the extra material that was added through other media was always up to par, but with the fluff now effectively only being considers canon if it was in the movies, Clone Wars, Rebels and a short number of recent books and comics we are also left with a lot of other amazing stories potentially being lost in the 'Legends'-category. 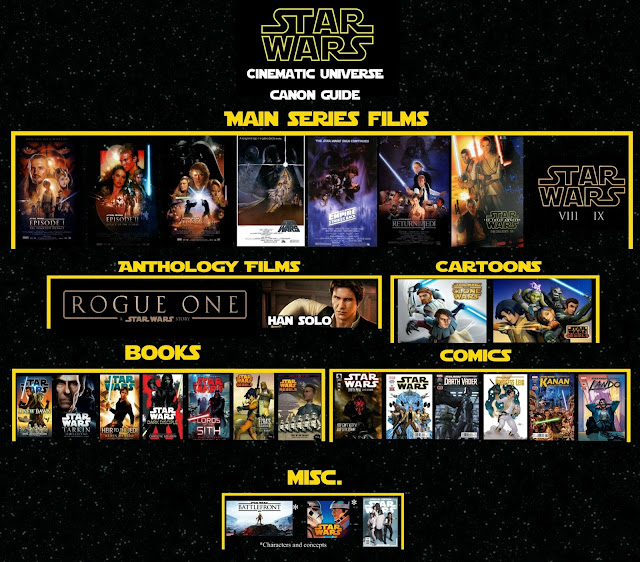 At the time of me writing this I have yet to see the new movie, but I doubt we'll see anything like the Thrawn or Jedi Academy trilogies becoming part of the official storyline again. It's going to be quite interesting to see where the franchise will go in the next 5-10 years, Disney is definitely aiming high with at least six more Episodes and various side stories through stand-alone movies, series and books.

I'm also rather curious to see just how the Old Republic fits into the story now, not in the least as two of the most interesting videogame rpgs of the last decade and a half, Knights of the Old Republic I and II, are sets in that period. Not to mention a full blown mmo in the form of The Old Republic also focusing on roughly the same period. Personally I'm not not much an MMO fan, but it has certainly led to some very cool cutscenes!
What's more, we've actually gotten the chance already to put Old Republic era minis on the tabletop by means of WotC's Star Wars Miniatures game. The Sith trooper units in particular have stood the test of time quite well when it comes to intimidating design.

The Jedi, Old Republic troopers and allies also offer a rather colorful mix of opponents to play against. Just going to assume most people would gravitate towards the slick look of the Sith here ;-)

Another rather interesting element from that period are the Mandalorians. Now they'd been hinted at in various written material and there was always the between both Fetts and these voracious warriors from Mandalore. The stories behind the Mandalorian Wars and how they got into conflict with the Jedi through Revan and Malak are a very nice read, or playthrough if you'd do the Knights of the Old Republic rpg route 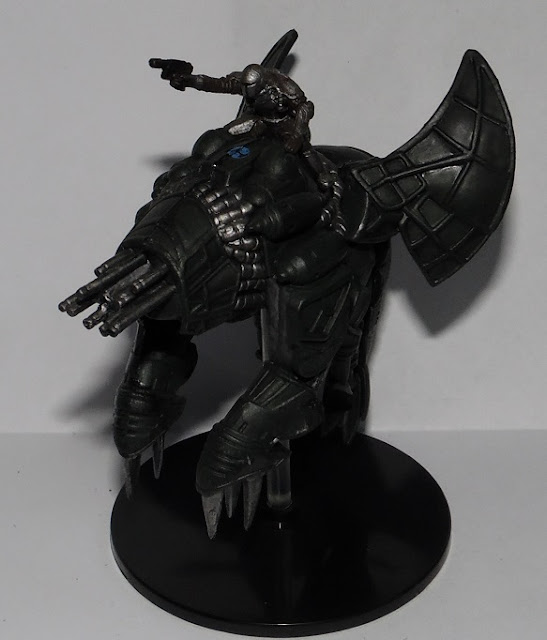 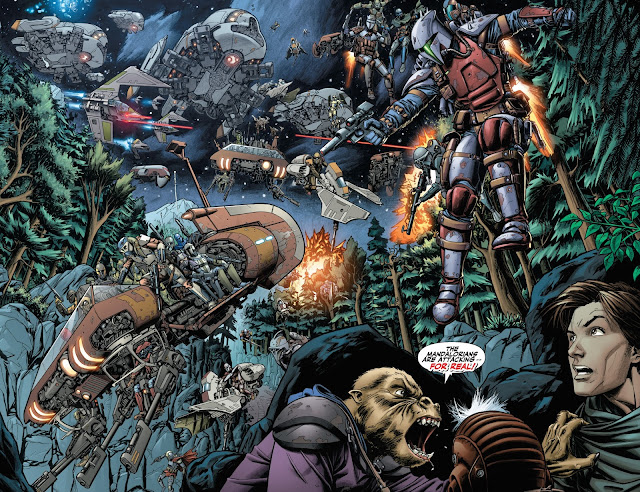 Heck we already got to see more of the them during the Clone Wars era, with animated series dedicating a fair bit of storyline to the resurgence of the Mandalorian warrior cult by means of the Death Watch. 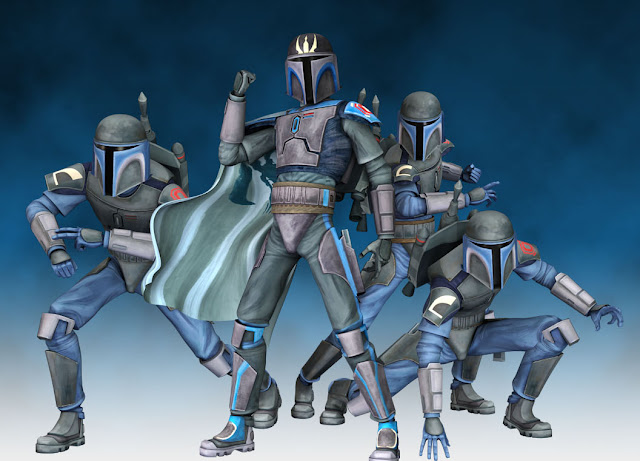 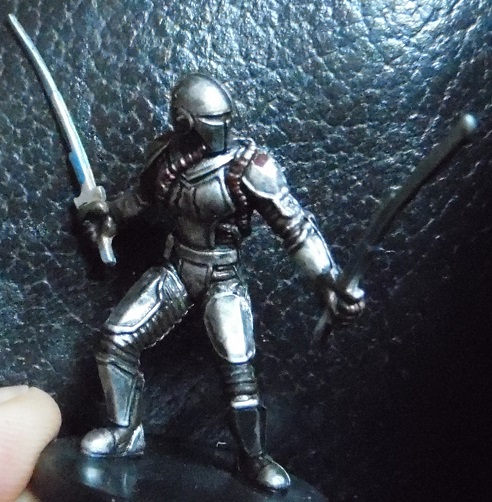 One of the fun things about the Star Wars franchise is just how much stuff there is in there, with so many smaller locations, cultures and factions having the potential to make it to the tabletop. A few leftover minis can add a ton of character to an rpg group or make for a great custom Imperial Assault campaign. Add some droids, Jawas and Tusken Raiders, or some extra ones given that there's an expansion for the game with them already, and you have all you need for a Tatooine-based campaign. 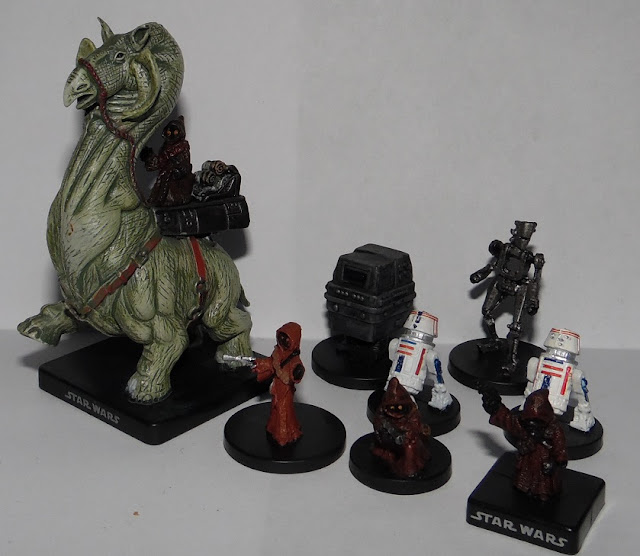 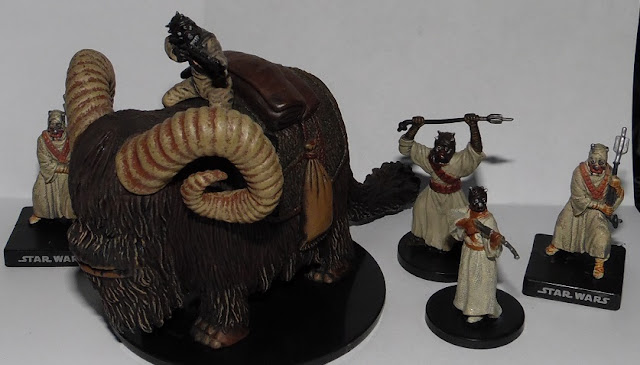 Do some slight rules tweaking via the skirmish rules and have the Galactic Empire attack Cloud City.

Or simply re-purpose Clone Troopers as Stormtroopers and use Clone Wars era smaller factions as count-as Seperatists or neutrals forces from Mustafar or Atapau for example. 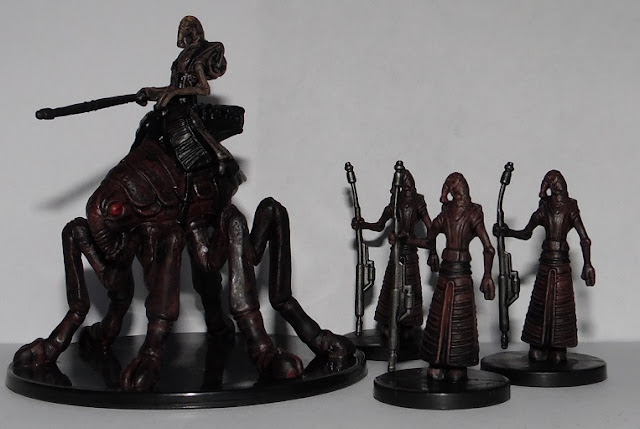 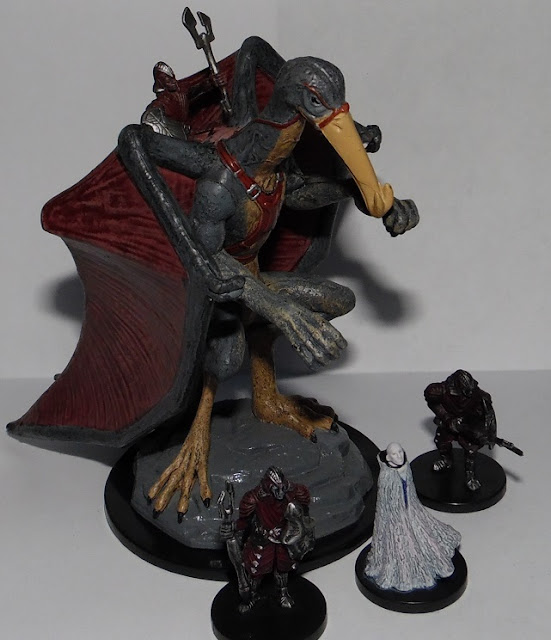 And yes, Sly Moore really shouldn't be in there. She was after all on Coruscant serving on Palpatine's staff.......which is a tad odd given that she's an Umbaran, a race that put up a lot of resistance after joining the Confederacy of Independent Systems. 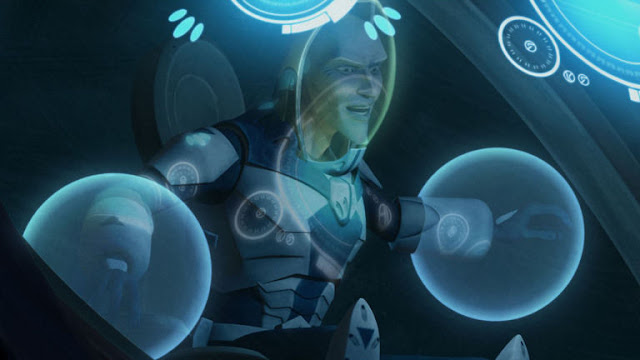 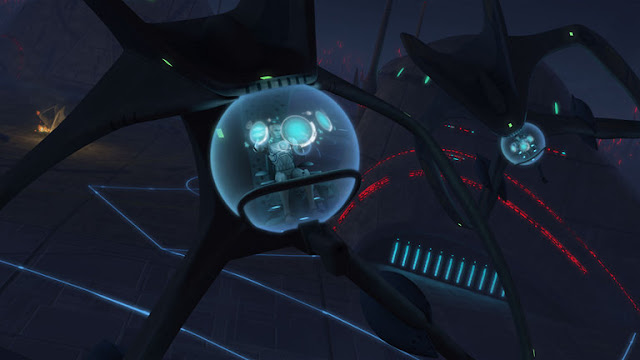 And speaking or lore being rewritten, it would seem the Yuuzhan Vong are gone from the universe as well. These guys where supposed to show up after Episode VI, when a New Republic was slowly starting to rise. Launching a religious war into the New Republic and being unable to be sensed by the Force, they proved to be pretty much the biggest threat to the universe since the Galactic Empire.

In fact one could even draw the conclusion that Sidious' push for power, galactic dominance and persecution of the Jedi was more than just a method of the Sith's revenge. But rather that he knew what was coming and was building up an army to defend his Empire. I very seriously doubt we'll ever see these baddies as part of the official canon again, they were simply too big of a threat and too deeply tied to the post Episode VI expanded universe for them to work anymore. 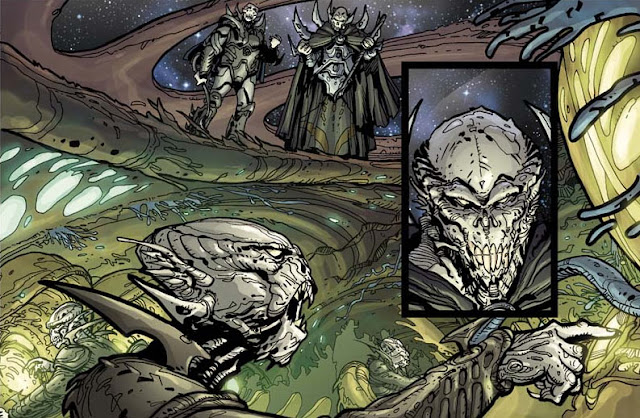 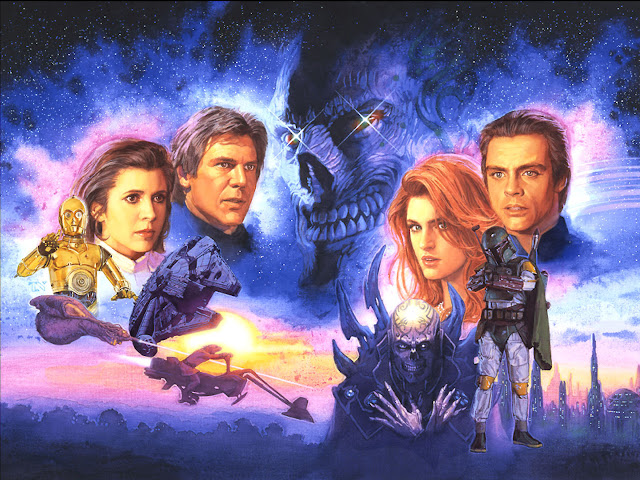 And finally, let us have a quick look at my personal favorite elements of the Star Wars universe: the seedy underbelly of society, the underworld and crime syndicates. Episodes IV and V already hinted at the just how much of an underworld presence there was in the lore, with such locations and characters like Mos Eisley, Jabba, Bossk, 4-Lom, Zuckuss, IG-88, Dengar and Boba Fett.

And over the years we've continually seen more and more interesting characters getting added to the bounty hunter category. There seems to have been a lot of work for them out there, heck Jango Fett even became the template for a galaxy-wide clone army.

Though even if we'd stuck with the Mos Eisley cantina scene there'd be plenty of interesting material to dig into (LINK to some more info on all those random creatures in there).

It wasn't until the opening of Return of the Jedi though that we got to see just how influentially the underworld was. Now there's definitely a point to be made for those first 15-ish minutes being redundant in the story, or Jabba making for a more interesting character if somehow he'd shifted sides and joined the Rebels instead of the Ewoks. But visually and world building-wise the opening is fantastic. 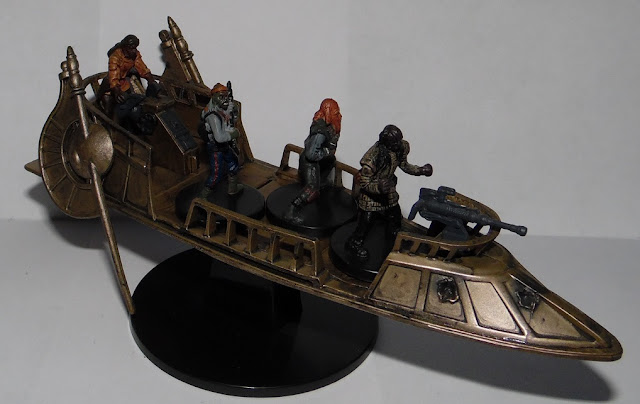 Interestingly enough we've seen the underworld become quite a big general player in the expanded universe. We have the Zann Consortium, led by Imperial Academy failure Tyber Zann, making things quite difficult for both the Galactic Empire and Rebel Alliance in the wake of the Battle of Yavin. 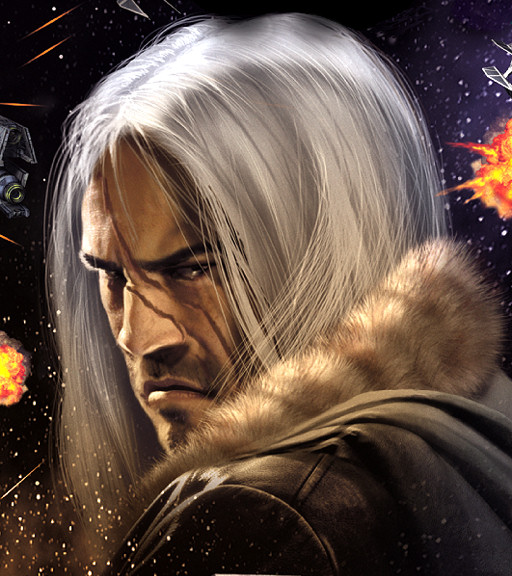 And then, of course, we have the Black Sun. This crime syndicate operated throughout the entire galaxy, proving to be worthy rivals to even the Hutt clans, while also controlling much of the Coruscant underworld. The Clone Wars even made them canon again, though only that they are still a powerful presence in the criminal underworld. Though in principle even Dash Rendar could be considered canon, as despite being in a non-canonical videogame, comic and book series, his ship the Outrider was added to the remastered release of A New Hope. 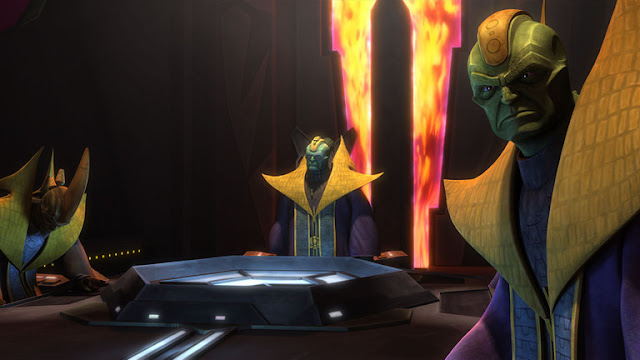 I suspect though most people will know of Black Sun as a result of the 1996 Nintendo64 release of Shadows of the Empire. A true gem of that generation of console gaming, the game not only offered fun gameplay with some rather tricky controls and the first taste of what would later become the Rogue Squadron series, it also filled in some of the gaps between episodes V and VI. For the time this was quite a spectacular thing  as pretty much no other material had dabbled in that period. 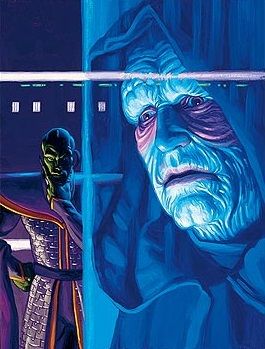 This was pretty much the first console game that actually felt like a Star Wars game. Now the lead character is a bit of a Han Solo knock-off, but the rest of the story and side characters really made this multimedia project a hit. Not in the least as it continues with the dark tone of The Empire Strikes back with the search for Han, acquiring the Deathstar II's plans and the underworld trying to gain favor with the Emperor over Vader. 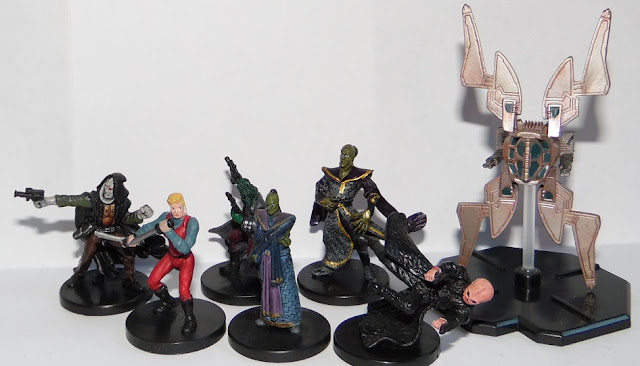 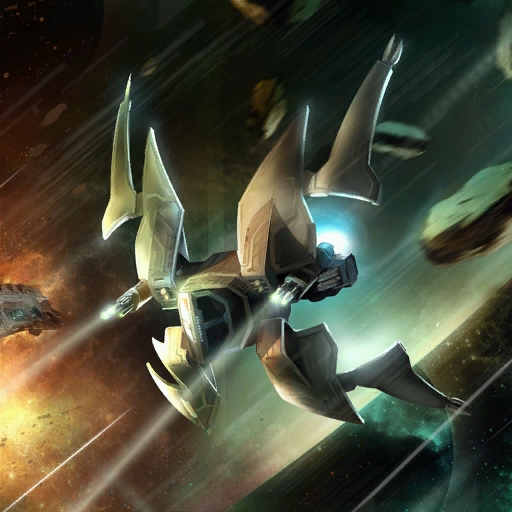 Prince Xizor in particular was quite the character, trying to play all players on the board in the hopes of coming on out on top himself. Offering the vast resources of the Black Sun to the Emperor's construction plans on Endor, he was at the same time selling information to the Rebel Alliance, while also manipulating the bounty hunters send after Luke to bring him in dead rather than alive in order to disgrace Darth Vader. The N64 game and fairly poor pc port have aged considerably, the novels, Dark Horse comics and Joel McNeeley soundtrack are definitely still work a look and listen though.

And that does it for this series of random Star Wars ramblings, time for me to go and get myself a movie ticket. That said, there's a lot of potential for some great Star Wars content this coming decade. Especially if some of the rumors for the side stories are true. Who wouldn't like to see more about the creation of Rogue Squadron or how the original Deathstar plans where stolen. Sorry about that last one Kyle Kattarn, but a heist-like movie centered around old and new bountyhunters could be great.
The chance to see these guys in action, with a younger Boba of course, who in the official canon already has a connection with Bossk and Aura Sing, would be fantastic. Maybe even joined by Lee van Cleef-inspired bounty hunter Cad Bane or Embo from the Clone Wars, both characters that are officially still alive during that period. Lots of potential there! 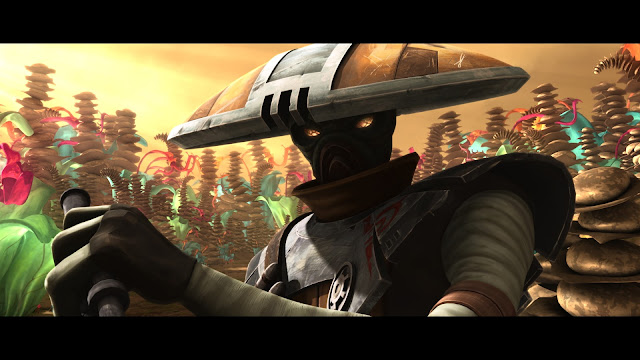