Today we are deep in Romulan Territory working on their Scout ship the Pi.  As with all the builds, it will only use the cards that came in the pack and no more then 50 points. 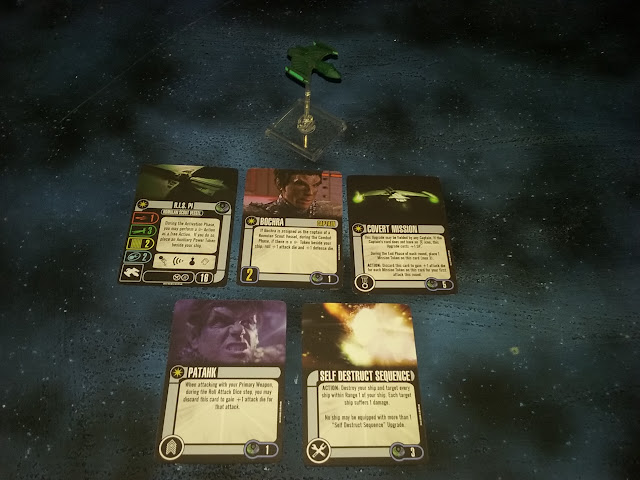 Lets take a little look and see what we can come up with and what uses we can put the ship to.... 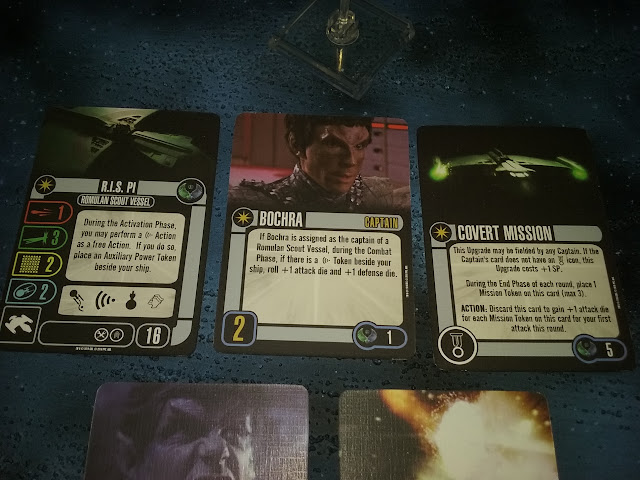 The Pi is cheap at 16 points, mind you it needs to be as with only one attack you are not scaring anything, high agility is what will keeping you alive in this ship, as the hull and shields are made of some form of Romulan paper.  Does this make it a bad ship? no.... the Pi has her uses, and with cloaking can get 7 defence dice.  Her named ability let you perform a free scan action at the cost of an auxiliary power, letting you use the sensor echo to slip out of  arc, or prepare yourself, as the ships dial has so many greens on there is no problem resolving the problem.

Bochra is our captain, he is only skill 2, but he is cheap and works well with the build, as if there is a scan token besides your ship when you attack you get an extra attack dice, and also an extra defence dice.  That way all of a sudden at range 1 the Scout ship is putting out 3 attack dice, which is not too bad.  He gets the elite talent Covert mission.... but he does not have an elite talent slot I hear you say.  That's fine, it says on the card any captain can take it even if they do not have an elite talent, though it will cost 1 more point if they do not.  Covert missions lets you stack a mission token on it each turn to a maximum of 3, and then as an action you can discard the card to add an extra dice per token on the card, so a max of 3. 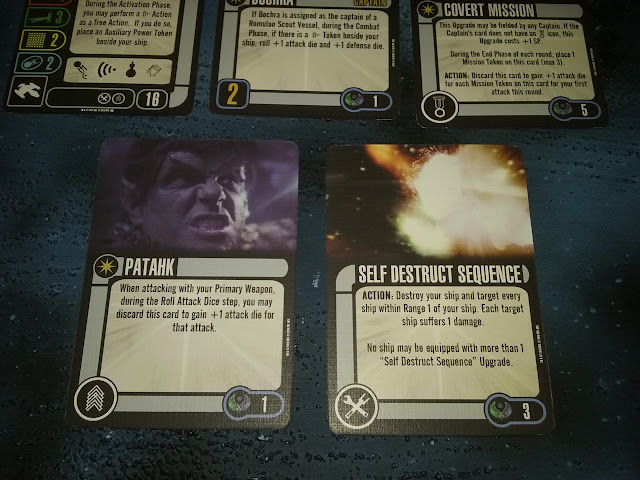 For crew we have Patahk, for one point he can be discarded during the roll attack dice phase to add an extra dice for the attack.  Lastly we have the Self Destruct Sequence.  this is an action that destroys your ship, and causes 1 damage to every ship in range 1.  This is best for when your battered, and down to your last hull  point, run it into the enemy and make it count.


Well the Pi with the right gear becomes a lot scarier then its stat line suggests.  You need to cloak first turn, and start stacking up those mission tokens on the elite talent.  Keep your ship lurking, until you are ready, you need it to count. line up your shot when you are at max, since you are so tiny and ineffectual you will often get overlooked, and you do have 7 defence dice if you are targeted.  Being captain skill 2, you will be shooting nearly last each turn, so as said positioning is key.  get yourself at range 1 out of arc of your main enemy target.  It will likely not bother with you when you have another ship on its way as well.  The other ship you have, perhaps a Bird of prey fires, causing some nice damage, the enemy retaliates and leaves you alone in the Pi thinking a dice attack, 2 now he's close to range 1, we can shrug that off, until.....

You use covert missions action as your action,  bringing up your 1 dice attack to 4. closing to range 1 increases it again to 5, you then take the scan as a free action reducing your targets defence dice by 1, and also activating Bochras passive ability that gives you another dice for a total of 6, then you discard Patahk to add another dice! so you finally turn your tiny little scout ship into a beast that out of no where swings out 7 dice.  Enough to finish off a juicy target, or at lest cause heavy damage on a big ship, all from a nimble cheap ship no one expects.

Its a one hit wonder, but after that at range 3 you are still rolling 3 dice, and if you get battered up to the point of death you can always use the self destruct.

This has proved to be a super fun build to play, and after being on the receiving end of it once, your opponent will always keep an eye on your scout ships, maybe drawing fire away from your bigger ships, so it is win win really.

Olivia really likes the ship and says " I cant wait to trick you, and kill with you with my little ship whilst my big ships kill you too.  You will be dead and you will lose"
cheery as ever!

To take a full look at the pack, and how you can get one to add to your fleet head over here