In todays shipyard we are deep in the heart of the Klingon Empire, refitting the IKS Amar for battle.
As with all the ship builds I will use only the cards that come in the pack, so you can se what you can build from the pack, and no more then 50 points for a total build, then discuss the uses for the ship in battle. 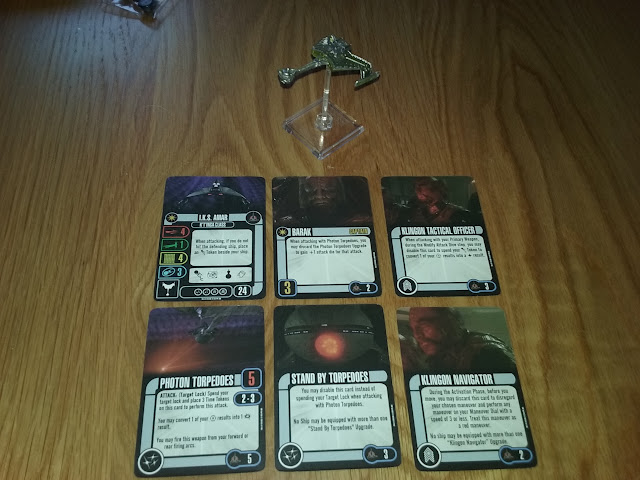 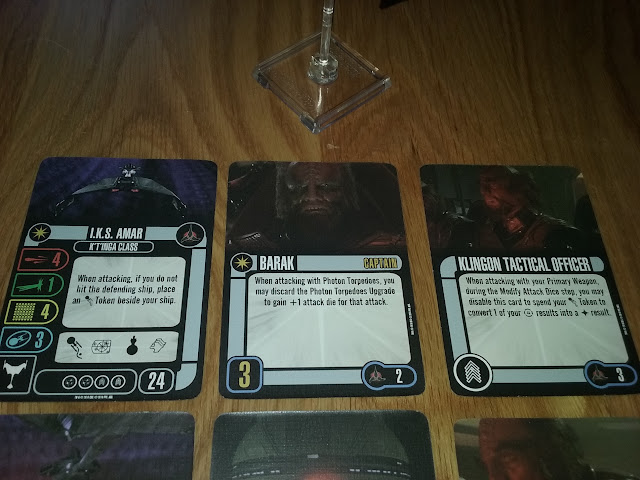 We start with the named ship the IKS Amar, her ability could potentially come in handy, giving me an evade token if I do not hit the target, now bear in mind that is not just missing the target, but if the target evades all the hits as well.... so its fairly useful potentially.

Barak is our captain, at skill 3 he will be fairly low down the pecking order, but for only 2 points he is worth it.  His ability will probably not come into play, but could be useful for that one moment when you think that one last dice will finish your target.

For crew we have the Klingon Tactical Officer. his ability to use an evade to turn a battlestations into a hit when you can not get battlestations naturally will prove useful for getting that extra bit of damage through. 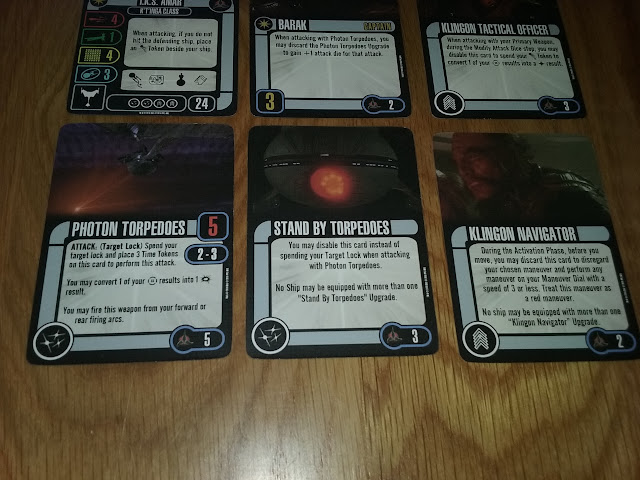 Next up in the crew slot we have Klingon navigator.  He will provide some more tactical flexibility by letting us change our dial before we move to any move with a speed 3 or less, yes it costs an auxiliary power, but it can allow us to position better for an attack, or to avoid one.

For weapons we have Photon Torpedoes with an attack of 5.  with the captains ability these can be boosted to 6 for one round at the cost of discarding them.  Stand by Torpedoes allow you to disable them instead of spending the target lock, so for one turn to get maximum damage you can take an evade as an action (presuming you already have a target lock)  fire torpedoes, discard them for one extra dice, disable stand by torpedoes and use the target lock to re-roll the blanks, convert one battlestations into a critical with the torpedoes ability, and spend the evade and the disable the Klingon Tactical officer to convert another battlestations into a hit.  This should provide a hard hitting punch to finish a ship, or a crippling alpha strike.


The Amar can take her place in the line of battle, or flank, she has solid stats all round, and plenty of manoeuvrability to shift position if needed.


Take a look at the full pack here and see how you can add one to your fleet.

Come and join us in all sorts of gaming chat in our Facebook group here, and come follow us on Twitter @rollyoursix join the chat, and tell us about your games!
Labels: Attack Wing ship build Star Trek