The Pi was a Romulan scout ship that was in service with the Romulan military in the mid-24th century. 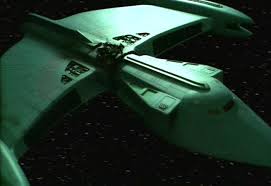 In 2366, the Pi, crewed by Patahk and Centurion Bochra, was carrying out a covert mission when it crash landed on the planet Galorndon Core, inside Federation space. The Pi was destroyed with an ultritium explosive after the crash to prevent its capture by Starfleet. Both Romulan crew members were eventually retrieved by the USS Enterprise-D. Patahk died from his injuries, while Bochra was returned to the Romulans. What the Pi was doing at Galorndon Core was never determined.

lets take a look and see what this little ship adds to your Romulan fleet. 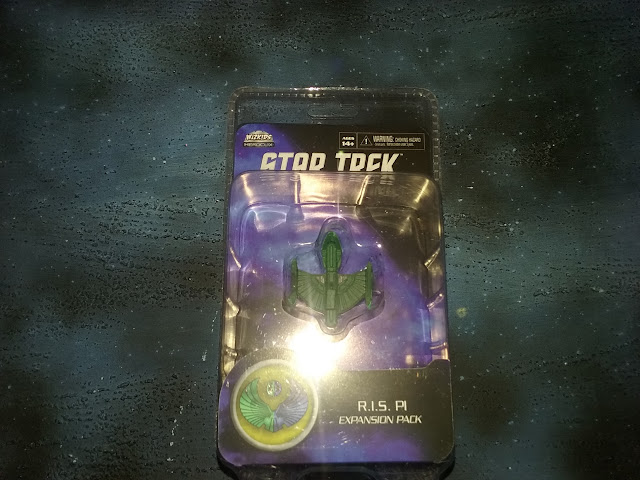 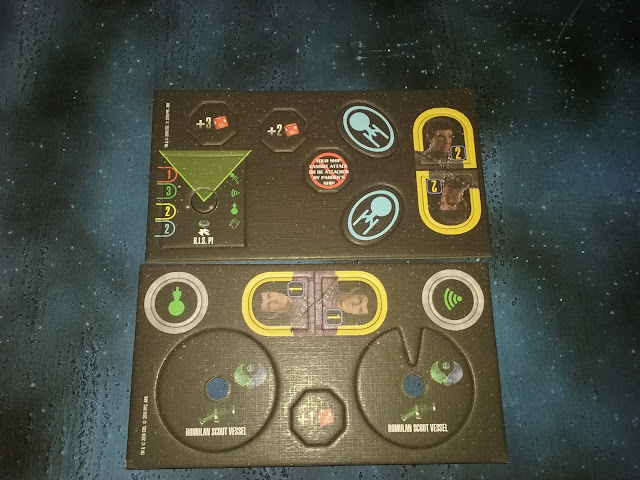 Then you get all the tokens you will need in nice quality solid cardstock, as always well printed and no issues. 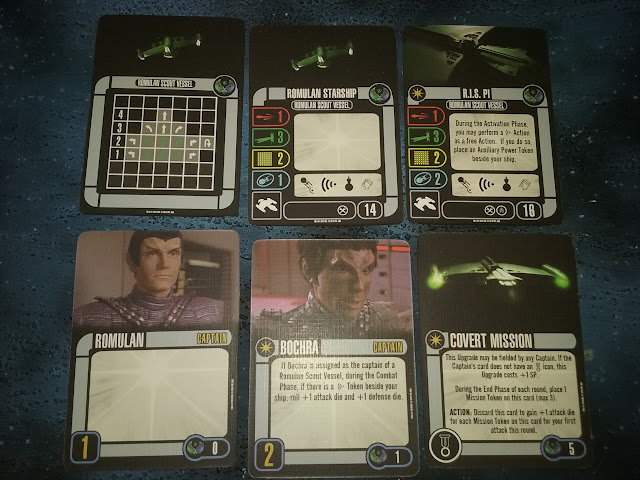 The Scout ship is super manoeuvrable, no red on her dial at all, even the come about is a white move, so its easy to position yourself where you want to be.  As with all the packs you get a generic ship and a generic captain so you can play them un-named.  The named ship Pi, has low attack of only 1, good agility, low hull and shields. She wont take much damage at all.  Its named ability allows you take a scan as a free action, though at the cost of an auxiliary power. .  Bochra is skill 2, and only 1 point, but he gives a good bonus that works only on the Romulan scout ship.  If the Romulan scout ship has a scan token on it in the combat phase you roll an extra attack dice, and an extra defence dice.  Which brings you up to swinging 3 attack dice at range 1, which is pretty respectable for such a cheap little ship, as that's the same as an Excelsior class.

The elite talent of the pack is Covert Mission.  This can be taken by any Romulan captain, but will cost 1 more point for those without an elite talent slot.  At the start of each turn you may place a token on the card, up to a max of 3.  Then you can use it is an action to cash them in and discard the card.  You gain +1 attack dice for each token discarded this way up to a max of 3.  With this card, and at range one for one turn you can be swinging out 6 dice. that's enough to start scaring most ships. 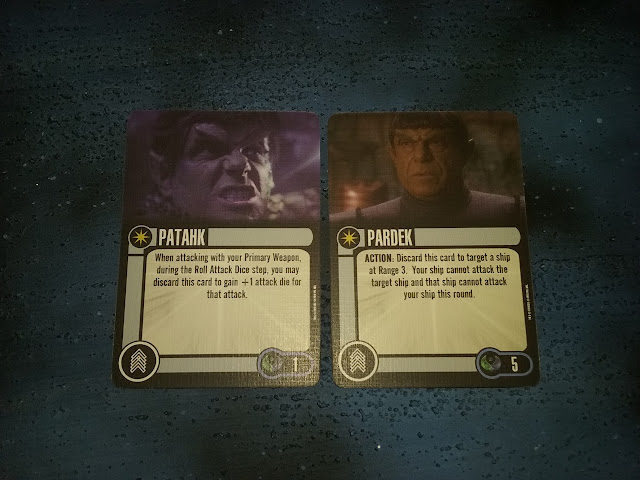 You get two crew in the pack.  Patahk.  He costs 1 point so is nice and cheap, and can be discarded during combat to add an extra attack dice to your attack.  Combine this with the other toys on the ship, and you can swing 7 dice for one attack, though you will drop down to 3 after it, but its still a very scary surprise.  Pardek costs 5 points,  and he is an action discard to target a ship at range 3, then you can not attack that ship, and it can not attack you.  Could be useful in the right circumstance, but having it restricted to range 3 limits its use a bit. 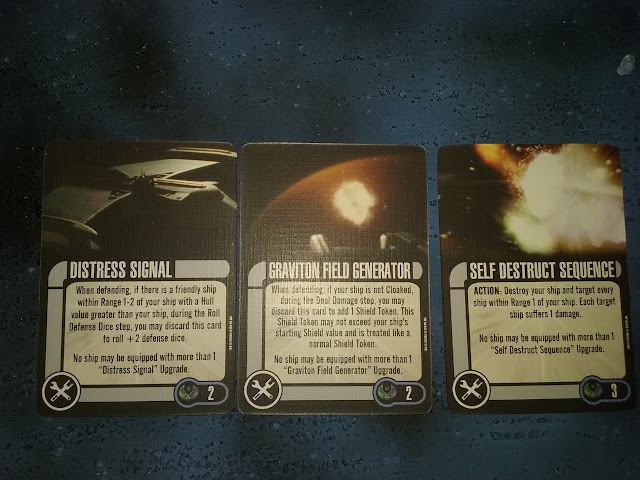 We get some new tech in the pack as well to distribute on your ship, or in your fleet as you need.  Distress signal  is used when defending.   If there is a friendly ship in range 1-2 with a hull value greater then yours (not hard in the scout ship) you can discard it to gain 2 extra defence dice.  Combined with being cloaked that will give you a total of 9 defence dice which should hopefully keep you alive.  Graviton Field Generator is another tech used when defending.  If you are not cloaked during the deal damage step you can discard this card to add 1 shield token to your ships shield value, so long as it does not exceed the starting value.  This is actually a pretty good upgrade, and really useful on big ships like the Scimitar, as if you are not cloaked and losing shields on the scout vessel, chances are you are close to death.  Self Destruct Sequence is a n action that destroys your ship, and all ships in range 1 take a damage as well.  Its pretty handy when your in a tight spot and about to be destroyed anyway, and if you have a couple of enemy around you its worth using. 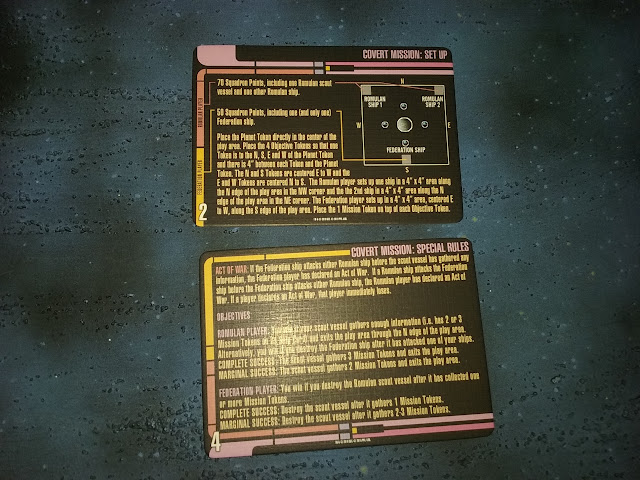 The mission included in the pack is called covert mission, which is a two player mission, with some extra rules, its great fun to play, and can be very tense, as a wrong move can be the downfall of your force.  It also has different levels of victory for the mission making it well worth multiple plays.  I have said before, and stand by the fact that the missions really make this game so narrative, and so much fun to play. 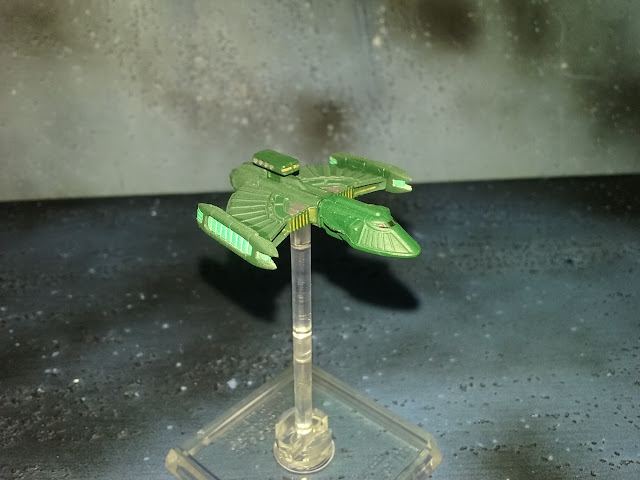 The model is actually very nice, and the paint jobs good too, even though its a tiny little ship. 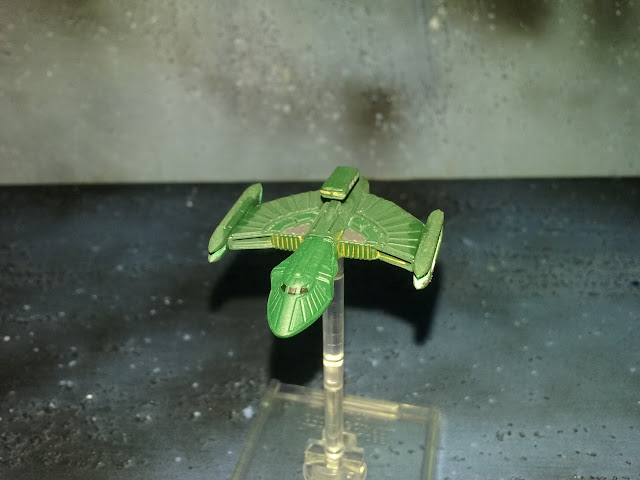 You can pick one up by finding your local game store here with an RRP of £11.99 it will add a great ship and solid cards to your fleet to help the Romulans sneak to victory, and provide an excellent mission to play multiple times.