King of Tokyo from IELLO games Review and unboxing

Today we get to take a look at King of Tokyo from IELLO.  Just looking at it brings back the memories of watching those great but cheesy Kai-ju films about giant monsters smashing up cities, and some great time spent playing Rampage as a youngling on my old Sega Mastersystem.

Now there is a way to get that feeling again on the tabletop.  The theme is carried off nicely on the box seeing the monsters battle away really gets you in the mood. 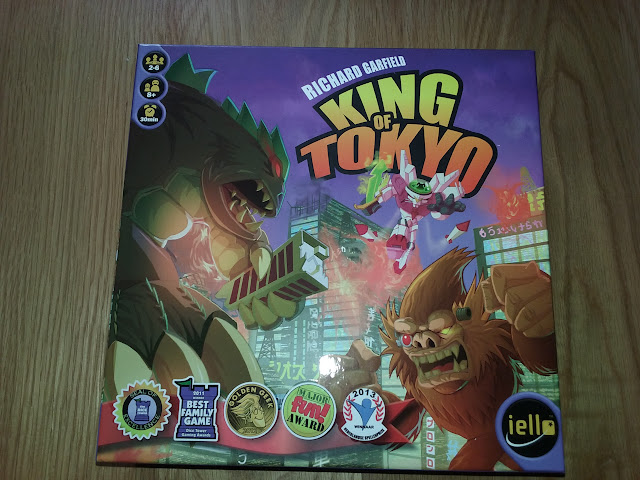 In King of Tokyo, you play mutant monsters, gigantic robots, and strange aliens—all of whom are destroying Tokyo and whacking each other in order to become the one and only King of Tokyo.
At the start of each turn, you roll six dice, which show the following six symbols: 1, 2, or 3 Victory Points, Energy, Heal, and Attack. Over three successive throws, choose whether to keep or discard each die in order to win victory points, gain energy, restore health, or attack other players into understanding that Tokyo is YOUR territory.
The fiercest player will occupy Tokyo, and earn extra victory points, but that player can't heal and must face all the other monsters alone!
Top this off with special cards purchased with energy that have a permanent or temporary effect, such as the growing of a second head which grants you an additional die, body armor, nova death ray, and more.... and it's one of the most explosive games of the year!
In order to win the game, one must either destroy Tokyo by accumulating 20 victory points, or be the only surviving monster once the fighting has ended. 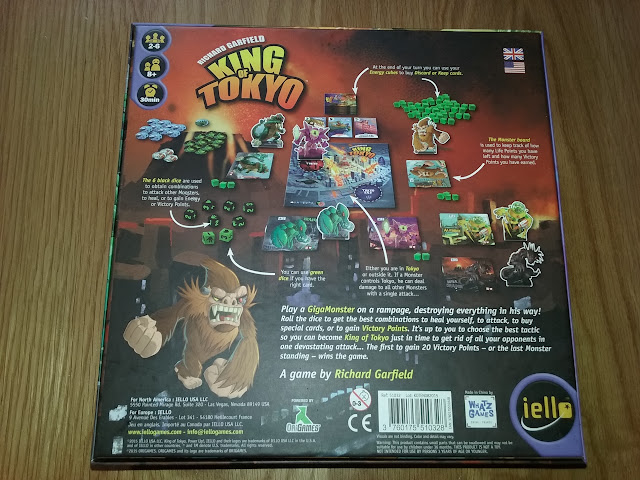 It recommends 2-6 players, and ages 8 and up.  Olivia mastered it pretty quickly, as the core concepts are simple, but its the tactics that you can use in the game that may be more suited for older children. 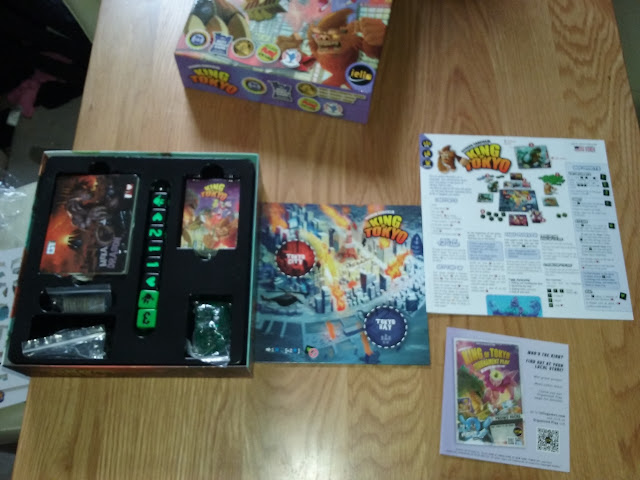 Preperation time to play this is minimal, as everything is already punched out and all the components have their own spot in the box to go back into so setting up and taking down time is really quick, which is exactly what you want in a fast playing game. 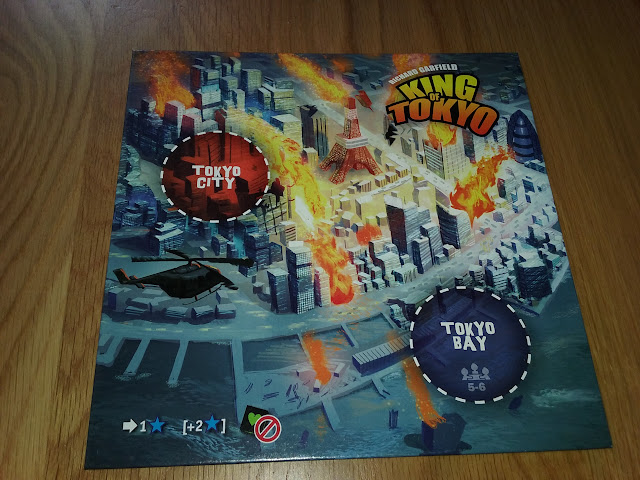 The board itself is nice, though small, but you do not need a large board.  It also has some nice reminders, such as you can not heal when you are in Tokyo, you also get a victory point each time you move into the city, and 2 if you are there on the at the start of your turn.  When playing 2-4 players you only use Tokyo city, but with more players Tokyo Bay opens up as well. 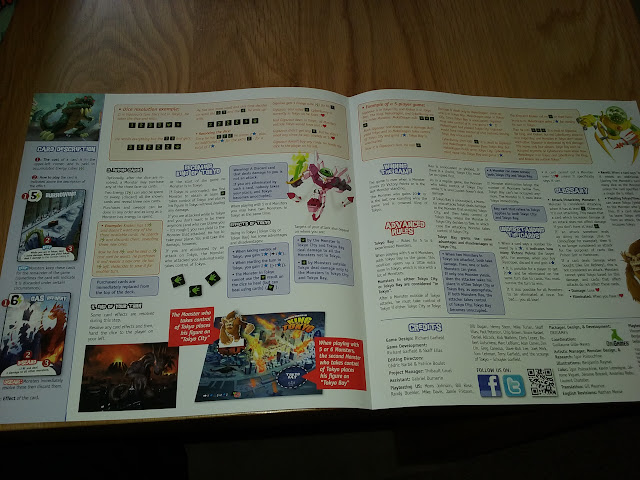 The Rulebook is full colour, with some nice art, and well laid out.  Learning the rules will take you no time at all, and there are plenty of examples throughout to keep you going and guide you. 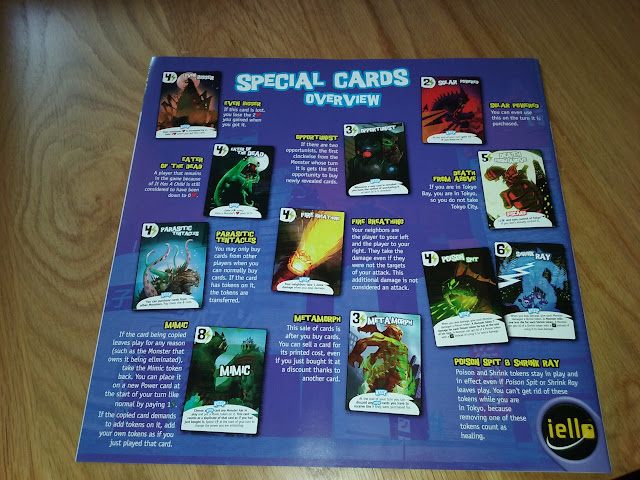 The back of the book has a nice overview of some of the special cards you will find in the deck that goes along with the game, its nice and easy to keep the book out as quick reference should you need it, though after a few plays you should not really need it. 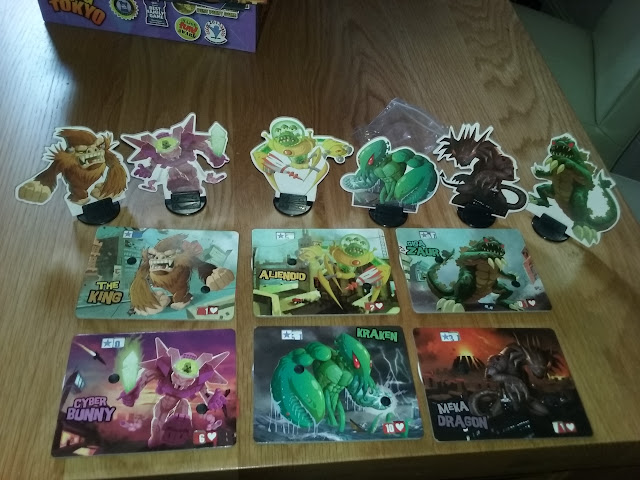 You get 6 cardboard monster tokens, with detachable plastic bases for storage.  All the creatures have the same health level, so apart from look their is nothing to differentiate them.  That does not matter though, the art is great on them! and you will soon have your favourites.  I am torn between Giga-Zaur ( as he resembles slightly the classic Godzilla monster) and Kraken.  Olivias Favourite is Cyber Bunny and Meka Dragon.  The monsters all have their character oozing from their trackers and stand up tokens. 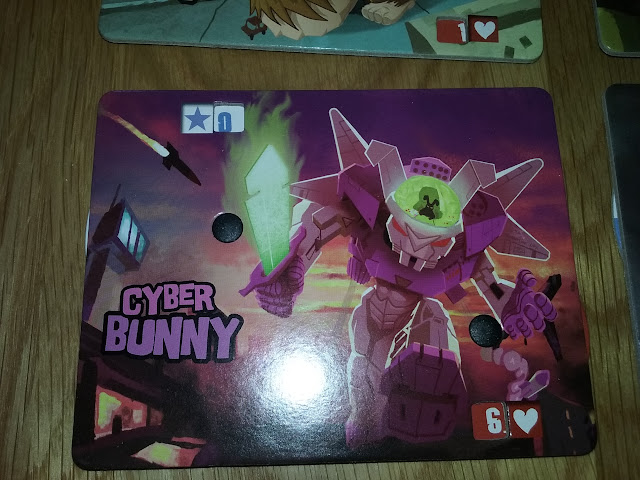 The tracker comes ready assembled with two dials, one in the top left with stars which tracks your victory points (first to 20 wins) and the bottom right dial is your health.  All monsters start with 12 health that can be lost and regained in the game. 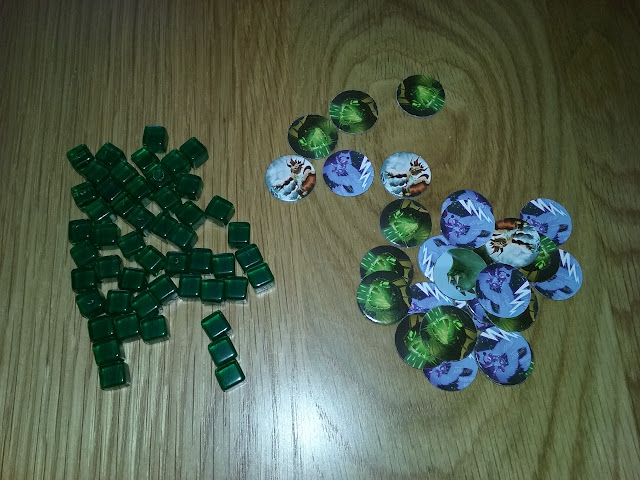 You get a bag full of these awesome little cubes that represent Energy that can be used and sold in game to buy abilities.  You also get some tokens for different effects your monster may suffer. 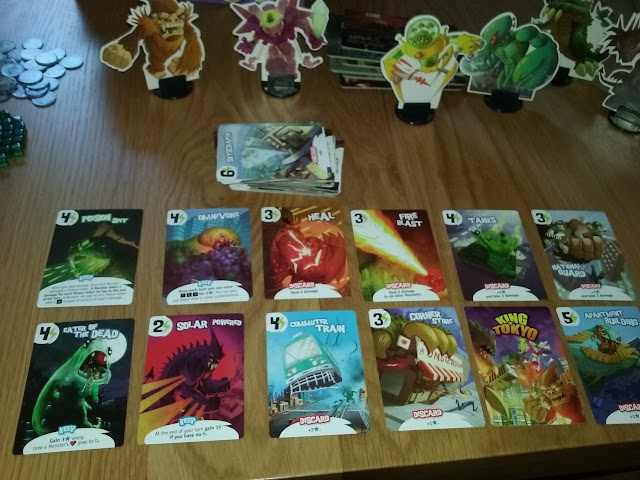 You next get a deck of cards, that have different abilities, or upgrades you can buy with your energy you collect to personalise your monster and give him that edge in battle. 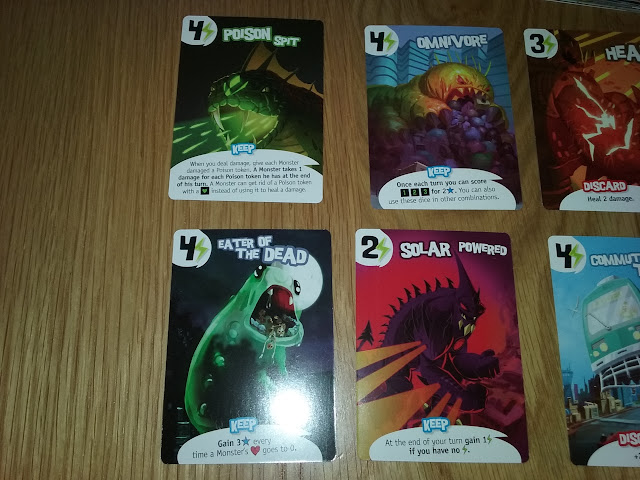 They all feature excellent characterful artwork, and clearly display the cost, and how they are used 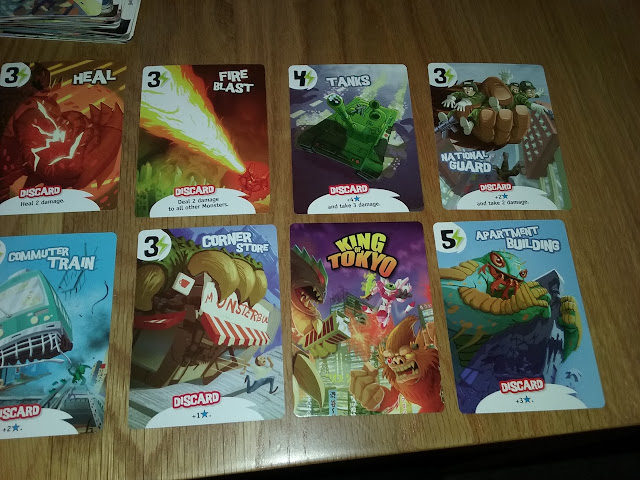 They range from abilities you keep,  to one use weapons, or things that give you extra victory points, all adding to the theme of the game.  Corner Store for example is a discard that give you an extra VP, which if you look at it like that is ok, but if in your head your monster is hurling it across the city, then your playing it right! Fire Blast can do 2 damage to all other monsters, very useful in battle. 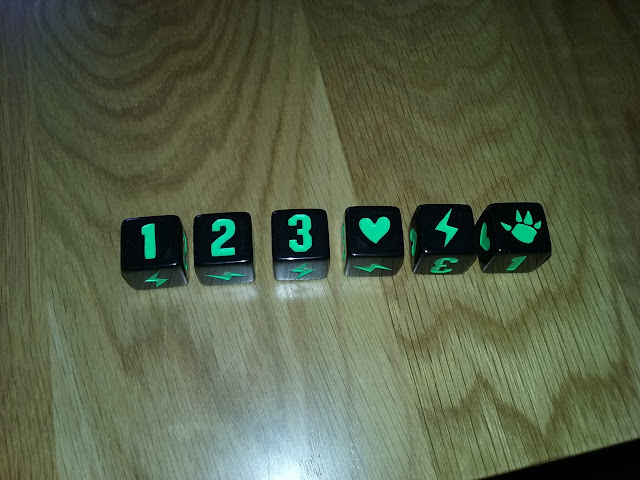 Then on to the dice... these are lovely.  Big and heavy they are bigger then than your average d6, and have nice symbols cut in that are easily to read and quick to follow.  You get 6 black dice which are the standard ones you roll each turn. 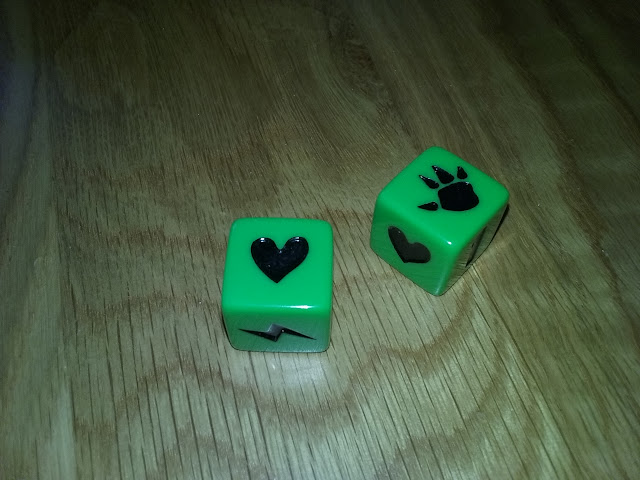 The green dice are bonus dice, and only used on occasion, but it is cleared mentioned when they will via a card effect or such. 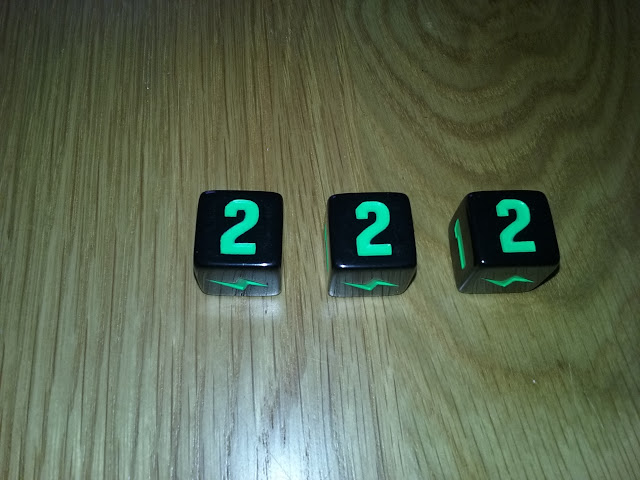 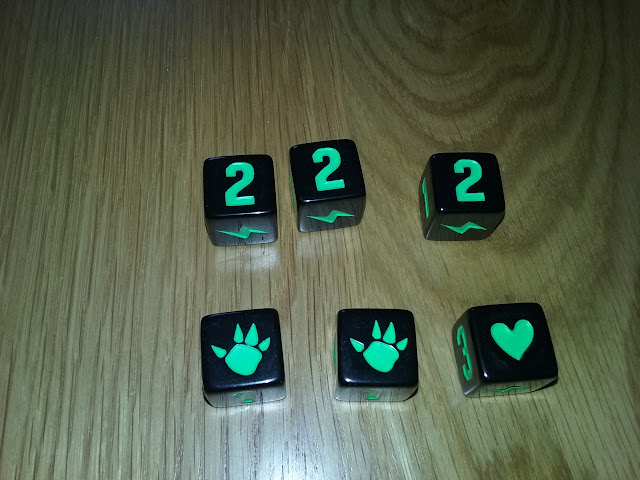 Then there are other symbols, such as damage which is the paw symbol, and the heart.  So here we have 2 VPs, 2 damage and one heal. 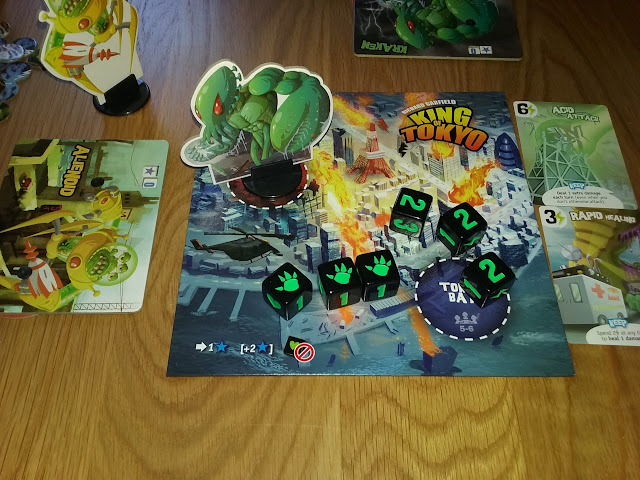 When the game starts one player begins in Tokyo, and then rolls his 6 dice.  He can re-roll up to 2 more times, keeping results as he wishes, and re-rolling any number.  When you are in Tokyo you can not heal, but when you attack it hits EVERY monster outside Tokyo, so you can really begin to lay down hurt, and you get VPs for staying in Tokyo each turn. The downside is each monster outside of Tokyo hits you, so you can be suffering a lot of damage. When you are hit you can leave Tokyo to be replaced by the attacking monster, but the hard part is judging when to stay in to gain VPs, and when to quit, and bail out of Tokyo to heal up and mount another attack.  You may want to earn energy to buy some particular nasty upgrades and the best place is out of the city where its a bit safer. Kraken above has gained 2 VPs and done 3 damage to each monster outside Tokyo 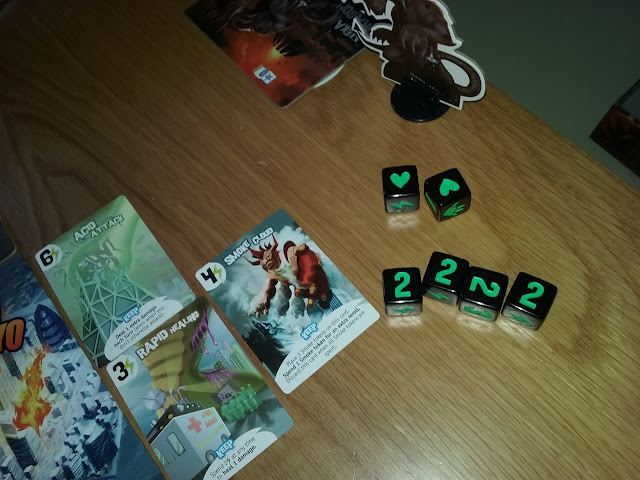 After being in the city for a while Meka Dragon is trying to heal and gain some points. 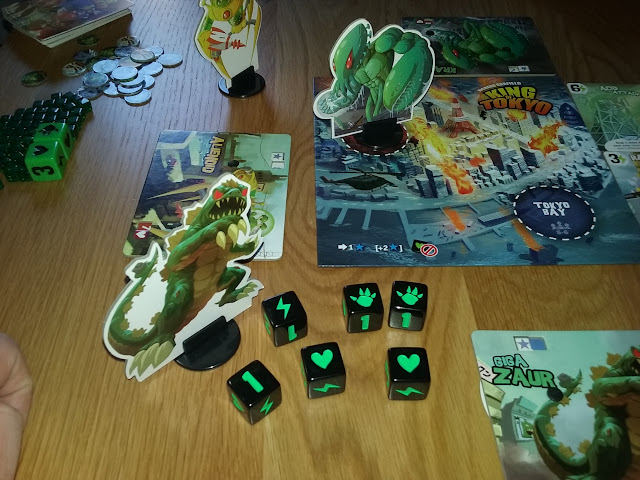 GigaZaur wants in!!! so he does 2 damage to Kraken, and heals himself too.  Kraken can either stand his ground, or give up an move out of the city.  The winner of the game is first to 20 VPs or the last monster standing. 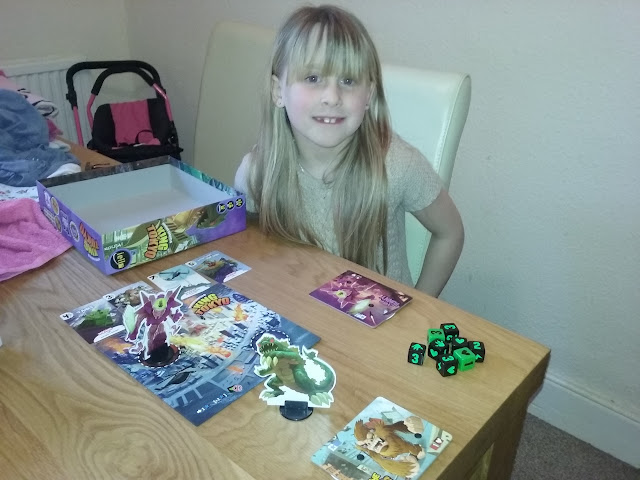 The game works best with 3 or more players, as its more of a challenge.  With only 2 players the damaging all the outside players is not so much of an issue as of course there are only 2 of you, so one in the city, and one outside.  It is still a tactical game, thinking about when you will yield, as you still gain VPs and cant heal whilst in Tokyo. 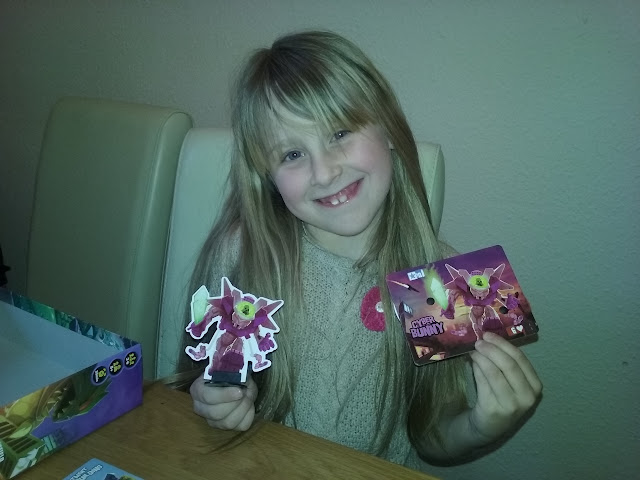 Cyber Bunny is Olivia's favourite as "its pink and I like Bunnies.... she is cute, she is a girl monster" 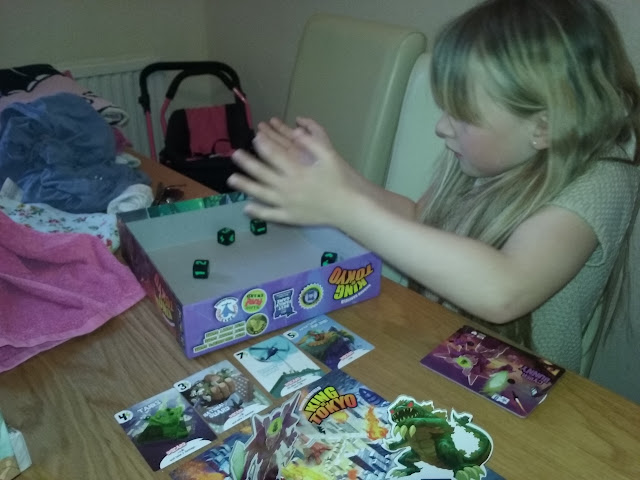 The Lid of the box can make a handy dice rolling area as these are some hefty dice to be flinging around.


The play time of the game is fast, and it never outstayed its welcome, I got a few friends to test as 4 player, and played 2 player with Olivia, which was just as much fun, but felt like a different kind of experience.  The components, are bright with great art, and nice quality, so this game will last, and it WILL be coming a lot, the friends I played with wanted another game straight after.

When you play this in character its great fun, making noises, and challenging the other monsters in silly voices it adds a lot more to the experience of the game.

Olivia's thoughts on it....  I liked the bright colours, and rolling dice, I always like rolling dice!.  The dice are a bit big for my hands, but I can still roll good ones.  Cyber Bunny is my favourite, I like to pretend she is slashing Gigazaur (dads favourite) with her sword, and stomping all over the buildings (this was said whilst she stomped around and said in a deep voice CYBER BUNNY WILL DESTROY YOU!  Its a fun game, and I liked it, and I will play it again, its easy to put away too as I help.

With a very good value RRP  of  £29.99 take a look  here to find your local store and grab a copy, you will have a great time with family and friends as a great game to play your friends, or family young and old

Come and join us in all sorts of gaming chat in our Facebook group here, and come follow us on Twitter @rollyoursix join the chat, and tell us about your games, and any other good family, or otherwise gems you have found.