Time to take a look at a Shiney card game. Its Firefly Fluxx.  Fluxx is a simple concept, It all begins with one basic rule: Draw one card, Play one card. You start the game with a hand of three cards... add the card you drew to your hand, and then choose one card to play, following the directions written on your chosen card. As cards are drawn and played from the deck, the rules of the game change from how many cards are drawn, played or even how many cards you can hold at the end of your turn.  There are several other variants of the Fluxx game out there and we took a look at the Adventure Time Fluxx here and had a blast with it, and being a fan of the TV show Firefly I was looking forward to seeing how it stacked up. 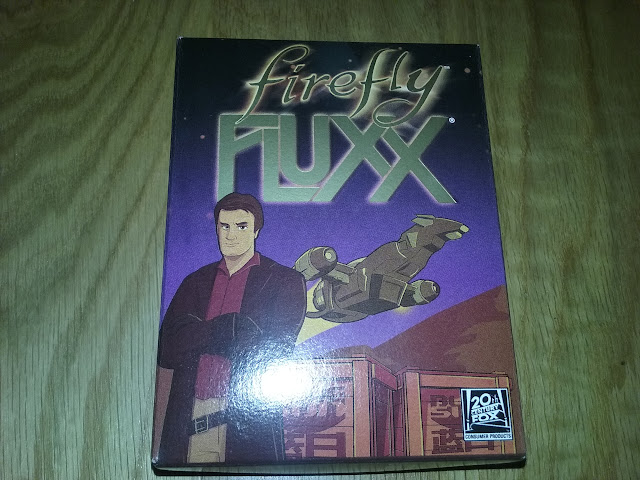 the art is all drawn rather then still images from the show or movie, which is good as it fits in with all the other Fluxx sets and will not look out of place when mixed in.

Fluxx is a great little expandable game that can be combined with other sets to increase variety and replay ability, though Olivia declared I was not allowed to mix them in with the Adventure Time set (she is a huge Adventure Time fan like me) as "Its Adventure time dad, not SPACE adventure time".  She knows how Fluxx plays because of that game 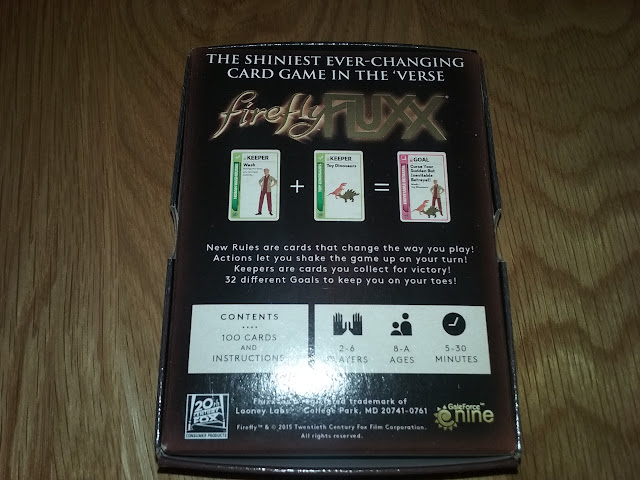 The box is small, which is good as it makes it nice and portable, and gives you a brief overview on the game, which with Fluxx is fairly simple to start with anyway.  2-6 players are recommended, I have played it 2 and 3 player and had fun each time so it works, it recommends ages 8 and up, ut younger is fine if their reading is good enough for the text on the cards, and it says a game can go from 5-30 minutes, which I found plenty of time, as even with 3 players it was only 15 minutes, but it could be longer with more players and depending on how much they procrastinate. 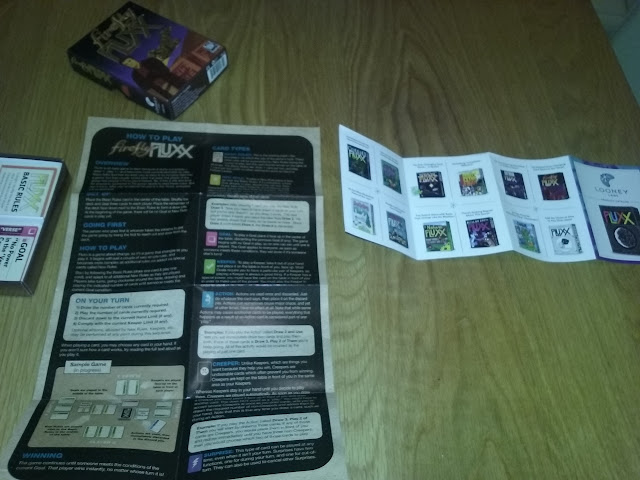 Inside the box you get all your cards, a sheet of all the others Looney Labs do, and a double sided instruction sheet. 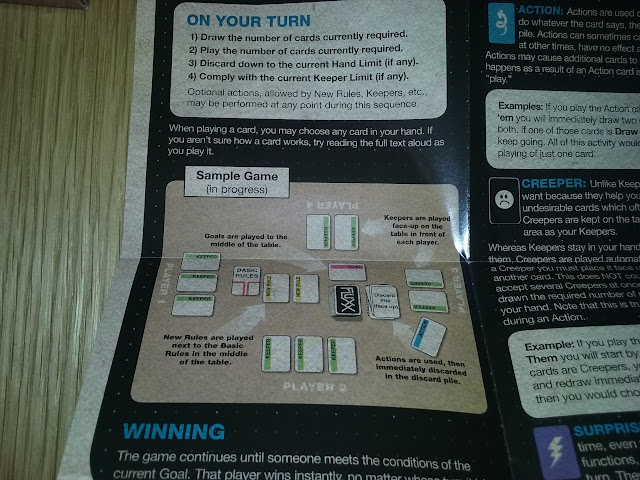 Its an easy game to learn the instructions are simple, and you can be playing in no time at all. 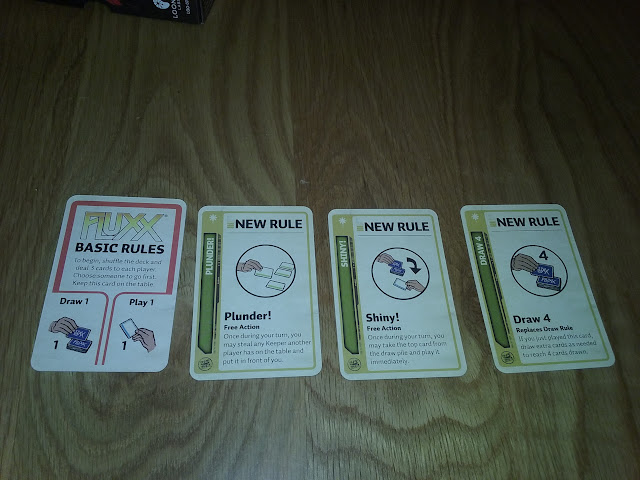 There are several different kinds of card in the deck, and it starts with the Basic Rule card.  This is the way the game starts, always with Draw 1, play 1. This is the most basic rules of Fluxx, you draw and play as many cards as the rules say, though other rules can add more.  As you can see other rules come in and replace them, such as Draw 4 instead of 1, or plunder which gives you a free action to do, with the large variety they keep the game in a constant state of change or Fluxx ( I still enjoy that joke) 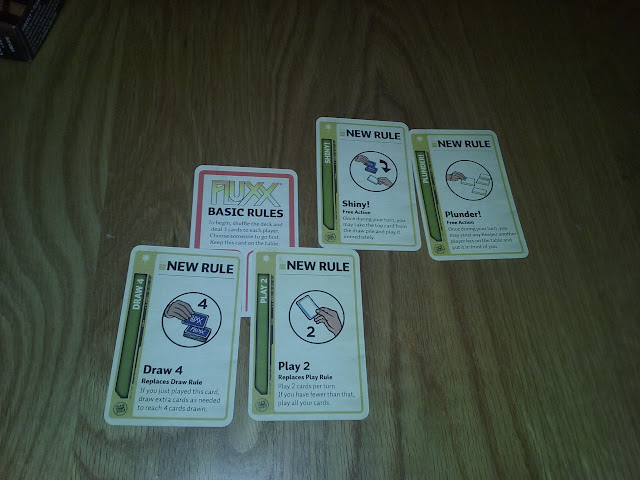 Here you can se how the rules come down and replace the original ones, and others are added in things can change rapidly as new rules are drawn and played, so its rare you will play two games identical. 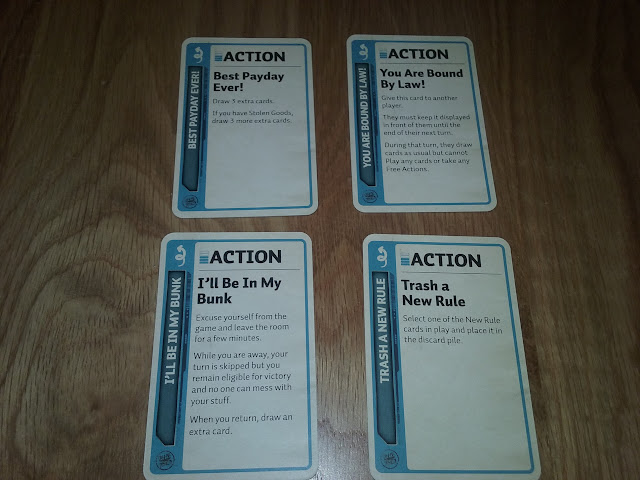 There are Action cards, these explain what you do on the card, and can be played to help you out, or hinder an opponent, the good thing is that all the rules are on the card, so you do not need to be flicking back and forth to the rules leaflet.  These mix things up nicely, are really clear, and sometimes have some nice fun titles relating to the show.  I confused Olivia when I played "I'll be in my bunk" she gave me a really weird look as I just left the room for a bit, but that adds to the fun. Creeper cards are bad news!, as soon as you draw one you have to play it down in front of you, and these are never good, they explain the effects they have on the card and feature bad things from the show, and they usually stop you from winning, though you can have cards that shift these onto other players, or the right goal combination. 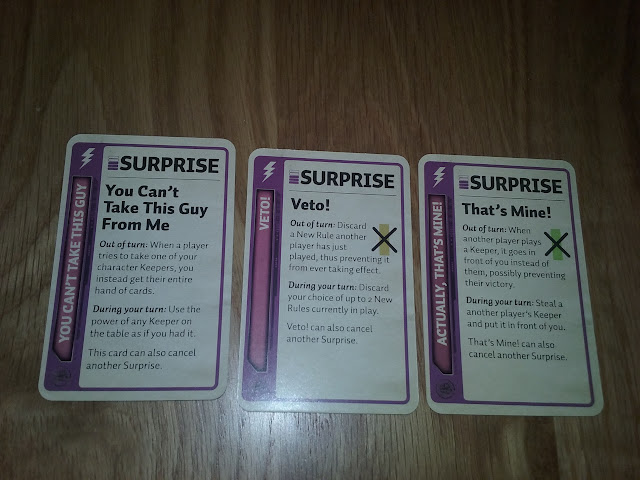 There are surprise cards that can change things up a bit, they can be played at any time, even not your turn to help you give an advantage to yourself, or just mess with your opponents, as it tells you if it can be used in your turn, or out of turn, some can be used in both ways. 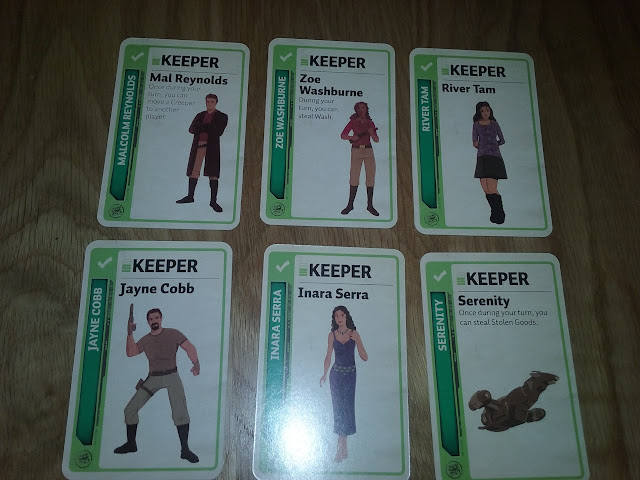 These are a few of the keeper cards,  each featuring a character form the show, Mal, Serenity herself, Jayne, and so on, some have their own mini rules on them as well.  These you play in front of you to help reach the current goal card.  ~There may come into place rules that limit ho many keepers you can have, so be aware. 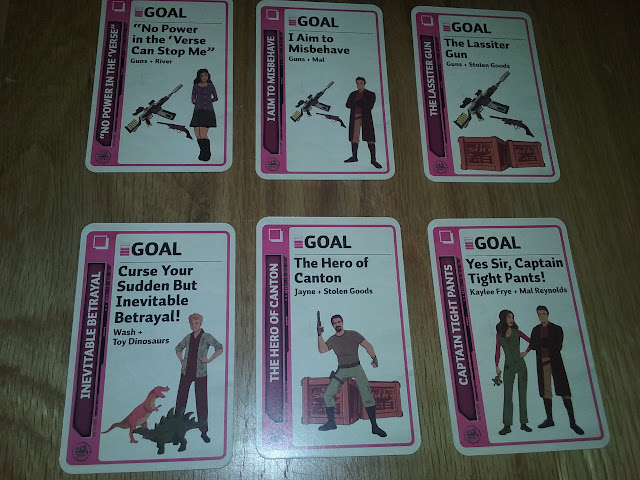 The Goals are what you are aiming for. You draw these and can play them changing the goal, and the winner is the first to fulfil them, all with little inside comments and titles you will know if you are a fan of Firefly.  you don't need to be a fan to play, as they don't effect the rules, but will increase your enjoyment if you know.  For example if the goal is "Curse your Sudden but inevitable Betrayal" you will need to get the Wash and dinosaur toys to win (also a nice nod to a show moment.) 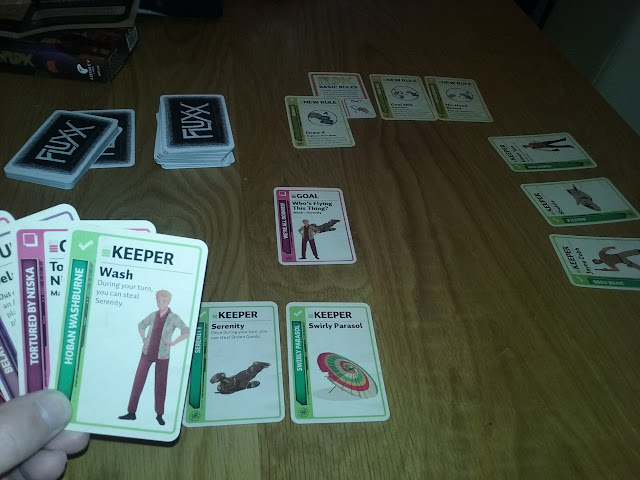 Playing with Olivia the current goal is "Whos Flying this thing" and I need Serenity and Wash to win.  I already Serenity down, and Wash in my hand, so unless Olivia pulls off something sneaky next turn I should be ok, or she may suddenly change the goal even to match a combination she has. 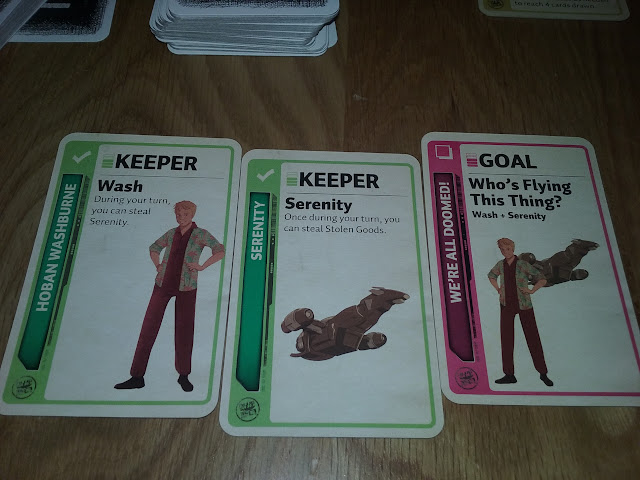 Luckily she didn't, so I played Wash, who with Serentity match my goal and I win.

We played a few other games straight after as it played so fast, and it changed each time, every goal was different and the play was simple, fun, but you still had to think to aim towards your goal, or when to play down the action cards for the right effect, or adjust the rules to your liking more.

Its a fun game for all ages to enjoy, and if you are a Firefly fan you will love it, if not but you like the idea of Fluxx, there are plenty of other versions out there, so find one give it a try, and you will soon want them all.

I asked Olivias thoughts on this.....

I like Fluxx, its a good game and its fast and fun, though I am not sure if I like Firefly or not.  I love Fluxx Adventure Time, and I know how to play the game, so if you are good we can play this sometimes instead of Adventure Time as I know you like spaceships"


Its RRP is £15.99 so head here to find your local store and go and grab it and become a Browncoat.
Labels: Firefly Fluxx