Time to take a look at something a bit different to the normal games I have tried before with Loony Quest. 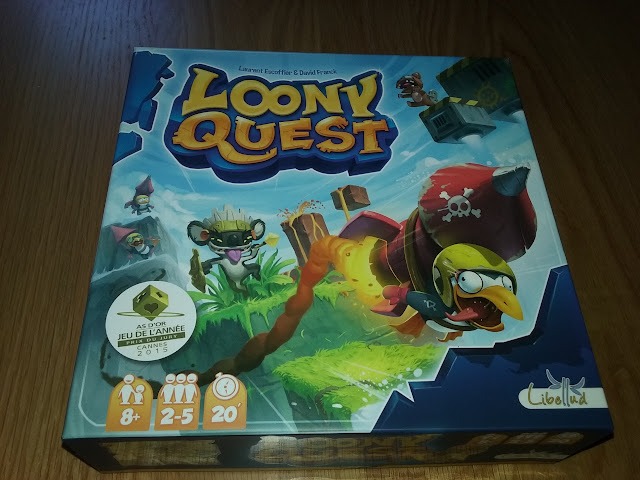 In the wonderful land of Arkadia, a very old king has no heir. He organizes a tournament to offer his throne to the bravest adventurer of the kingdom. Up to five finalists will wander seven worlds full of surprises... 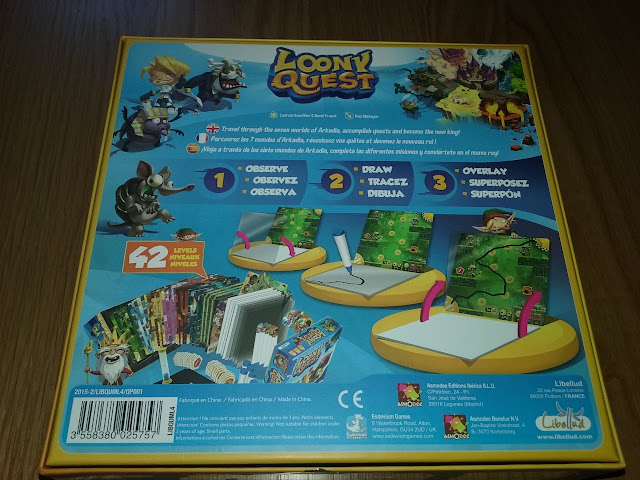 In the drawing game Loony Quest, players study challenging level cards, then try to replicate the outline to meet targets and avoid obstacles on their tracing sheets. Once finished, players place their sheets on top of the level card to see whether the drawings line up with the targets they meant to hit — or avoid. Largely inspired by video games, Loony Quest players discover various worlds, play with 3D and 2D levels, run into loony monsters — Loonies — and big bosses, trigger special stages, collect bonuses, use penalties on opponents, and gather as many Xperience points as possible to win.

Its recommends 2-5 players, and ages 8 and up, though I played it with Olivia who is 7 and she did very well at it.

Lets just touch on the box art for a minute, its very "video game", which I really like, and it suits the theme of the game, as you play it you will feel like playing an old school platformer game, or a mobile game, and it keeps this theme really well through out, so it has the visual appeal of the older gamer like me who remembers the joy of 8 bit games, and also the modern mobile device gamer like Olivia, so you are already in a game that does not really have an age restriction. 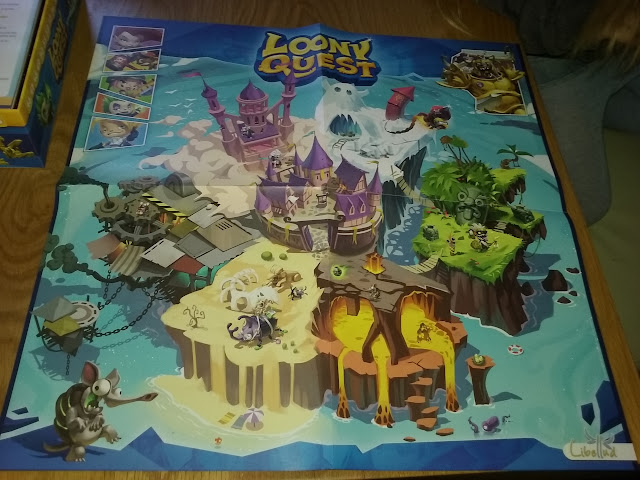 First thing that greets you is a cool poster giving you an overview of the levels, it reminds me of the kind of poster you used to get back in video game magazines in the 90s. 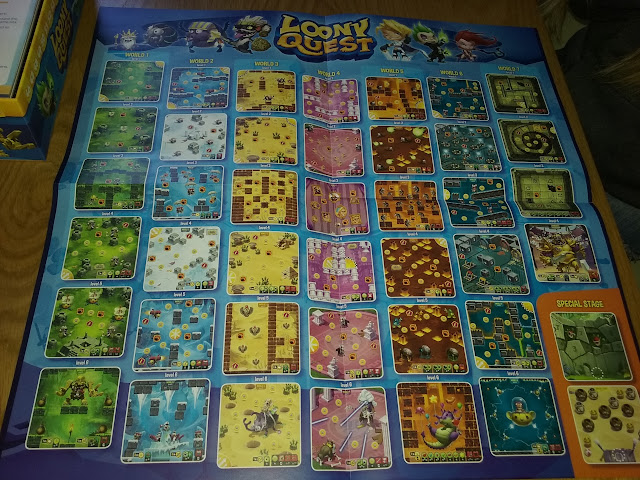 On the back it gives you a run down of the worlds, and levels in each world included.  As you can see there is a huge variety to play with. 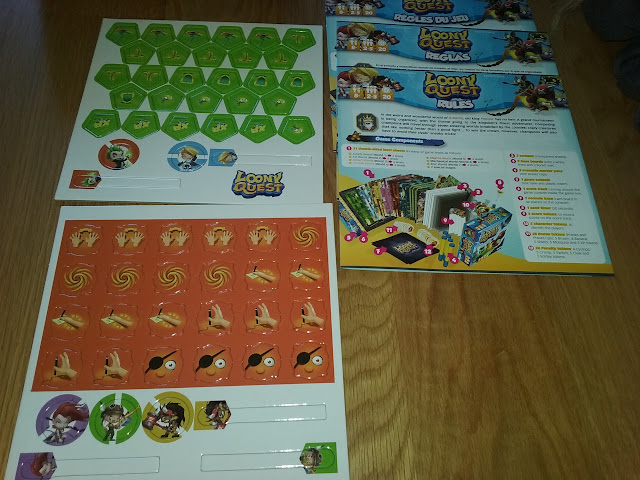 You get 2 sheets of nice quality card tokens you will need to punch out, and 3 copies of the rulebook, one in English, and others in different languages, so do not worry you will only need the English version (presuming that is your native language).  You can see player tokens, and the score markers, which look like a mini player image on a stick.  This is one of the many nice touches in this game, the box itself is the scoring track. with the scores written outside the inside of the lid, and indented into the plastic of the box itself.  With slots to fit your score card in it really helps cut down table clutter, and makes set up and take down times a lot quicker. 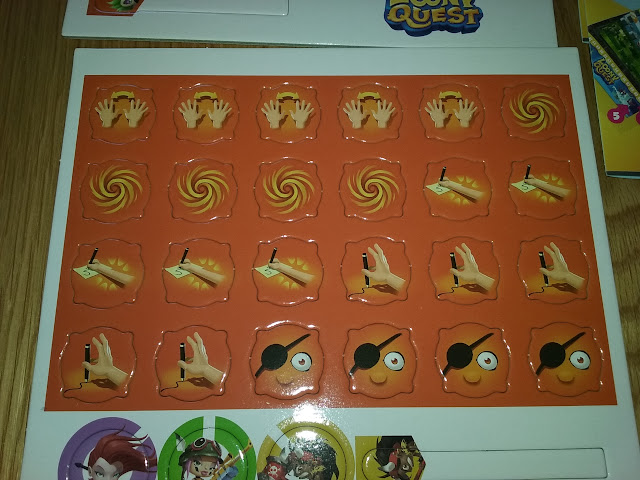 These tokens are bad..... in game that is! if you hit a bomb symbol of the map you draw one of these randomly, and they will hinder your next go, with all sorts of fun things, like having to draw with one eye closed, swapping hands, so if you are a rightie, having to draw with the left, which crippled me when I tried it as it looked like a drunken spider staggering home! or flipping over your normally plain white board to a coloured side which makes things so much harder to see and judge. 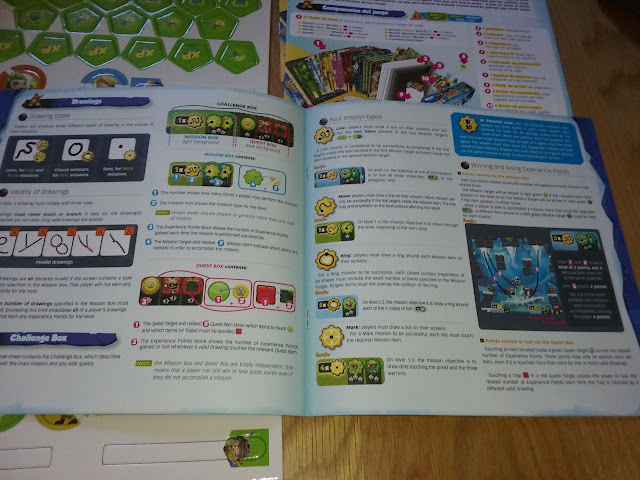 The instructions are full colour, nice and glossy and have plenty of examples of the rules and how to play, I did have to refer to it a few times, just to refresh myself what the symbols meant, but otherwise its not a hard game at all to learn. 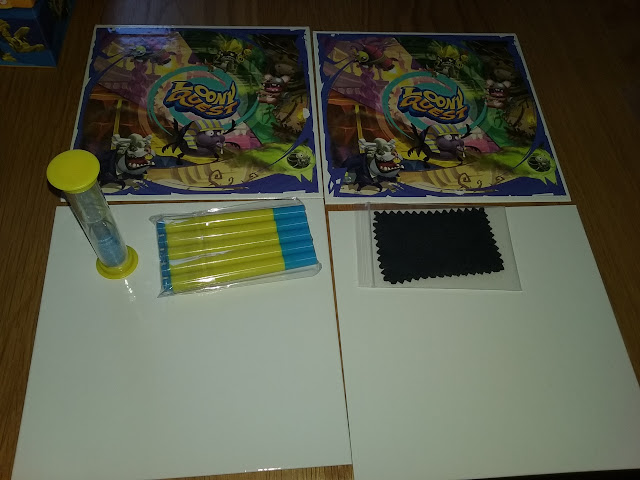 You also get 5 thick card player mats, that are double sided, white one side which is the normal side you use, and multi coloured with pictures on the other, which you have to use if you draw that token from the bombs.

You also get 5 markers designed to be wipe clean for the clear sheets you use to draw on.  a timer, as the game is timed, a pack of cloths for cleaning your clear sheet. 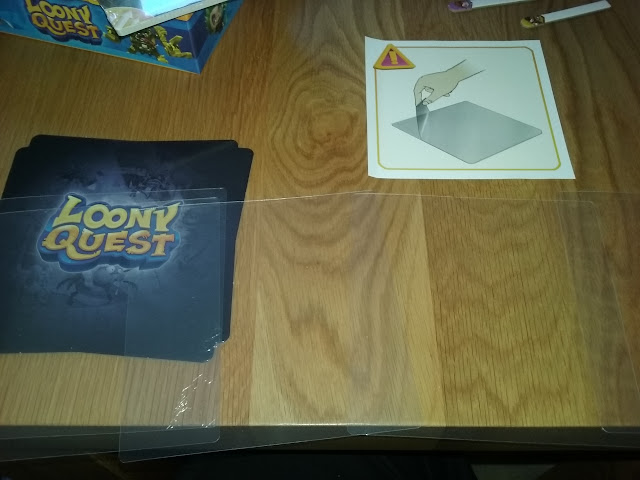 You then get 5 clear sheets, you will need to peel the coating off them before you use them, and the last thing is the box card topper.  This helps keep everything together when its packed up, and works as a board when placed in the box to hold your levels on. 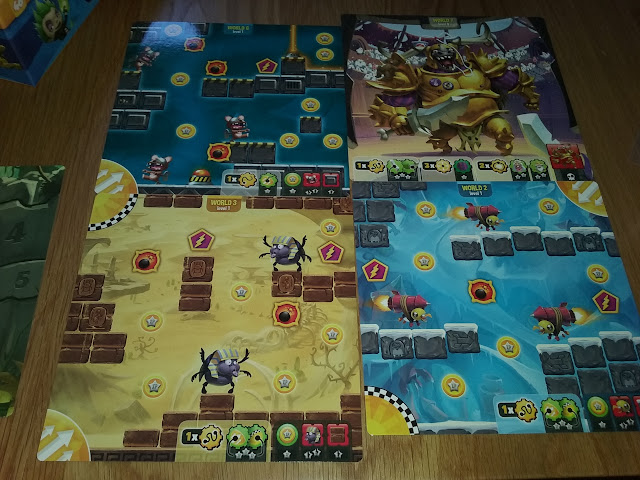 You then get 21 of these double sided level cards, all with different themes traps, and powerups and enemies on them. 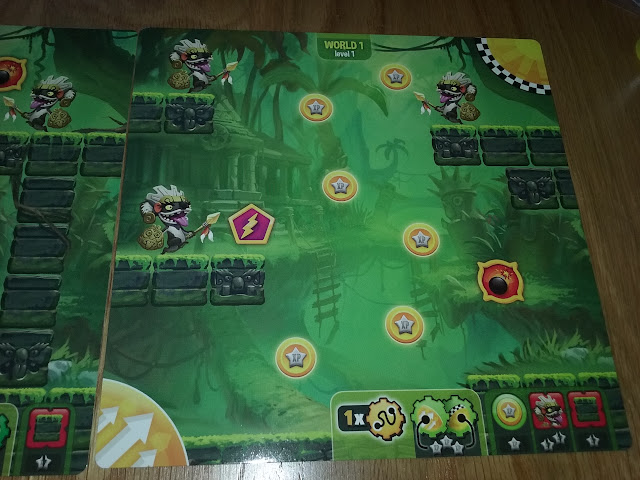 Each card states on it what you need to do, and what you get points for. on this one it says you can do 1 continual line, and going from the start point to the finish point will give you 3 points.  Each XP you pick up will give you 1 point, but in red each "baddie" you hit will deduct 2 points, and each wall 1 point. 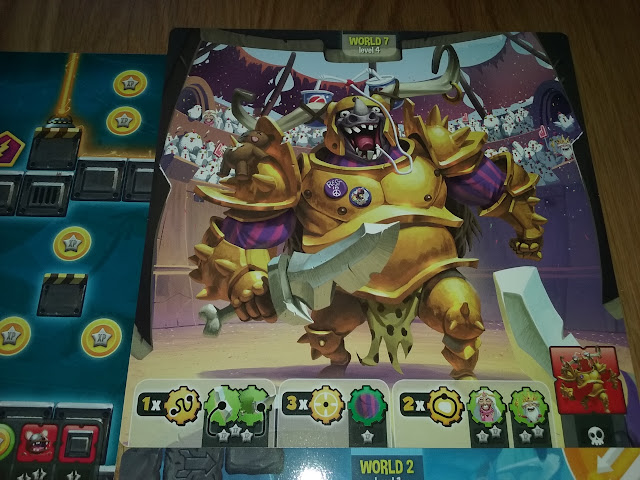 Each world ends in a beautifully illustrated boss to fight that make you do a mix of different things to beat him. 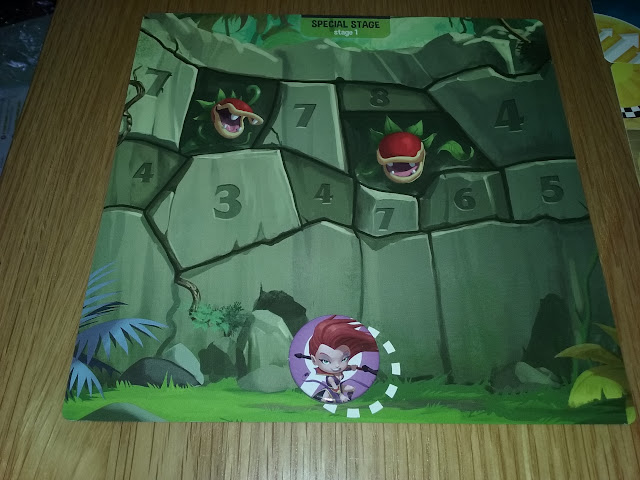 There are also bonus levels, where you use your player token and must flick them to gain points. 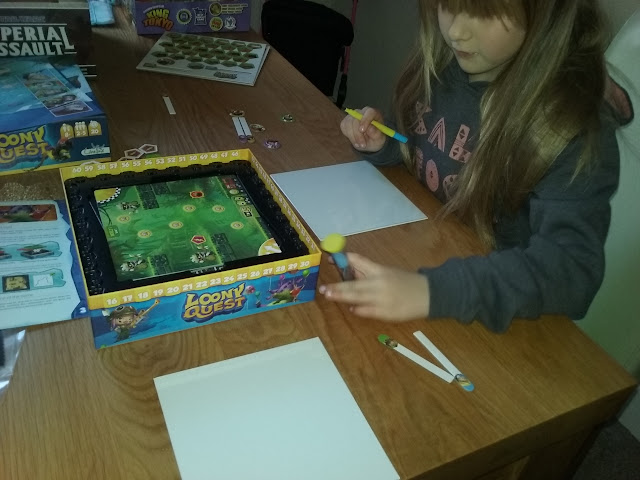 Olivia and me decided to play through World 1 from start to finish.  We set the game up with the current level sat in the box top, got our cards ready to go and flipped the timer.  You then have 30 seconds to draw the route through the level (in this case though you may have others challenges).  After the timer has run out you place your clear sheet over it and see how well (or not) you have done.  This is always done relative to your position of the box, which will rotate each turn so a player will always have a chance to be in front of it. 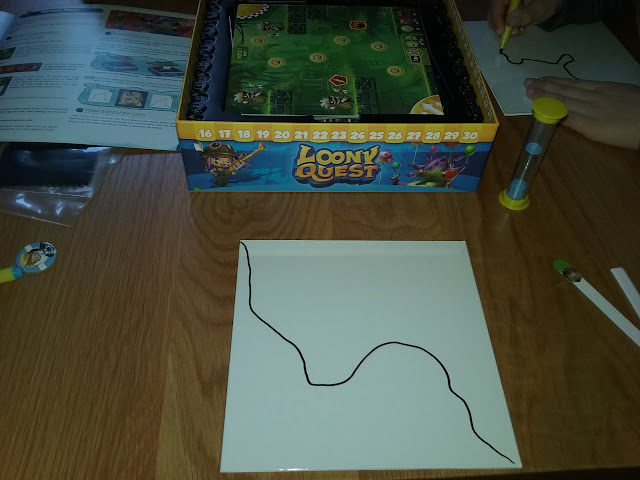 So this is what I drew, from my POV 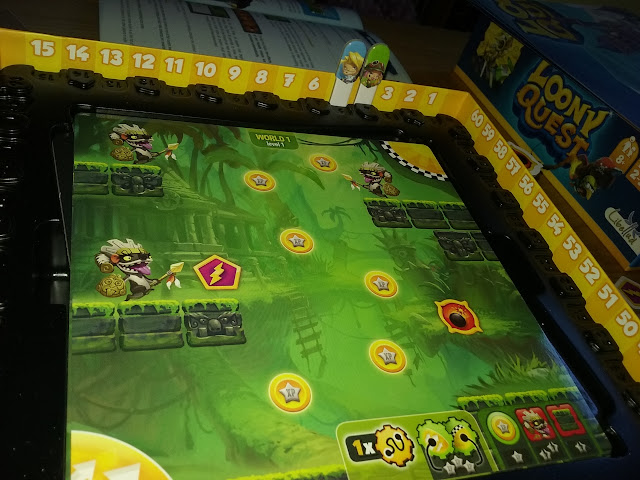 And it needed to match up with this level 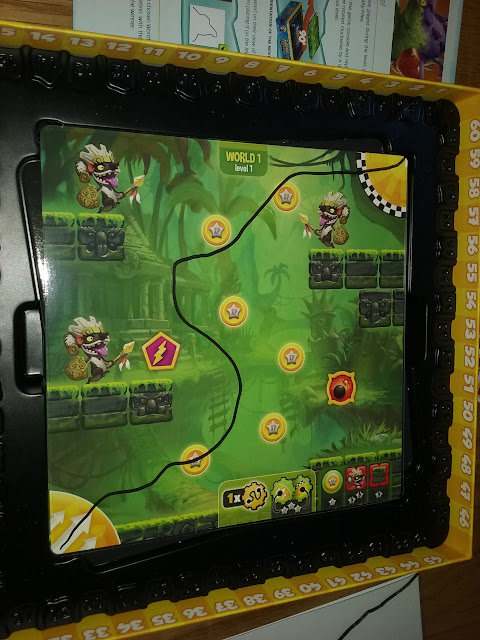 And Really I did not do too bad, scoring 5 points, 3 for the start to finish, and 2 more for 2 XPs I went though.  Believe me its not as easy as it looks! 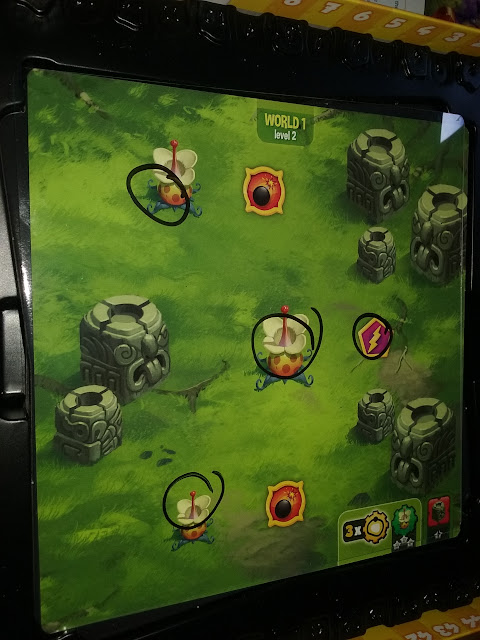 This level the goal was to circle the plants, and avoid the towers. 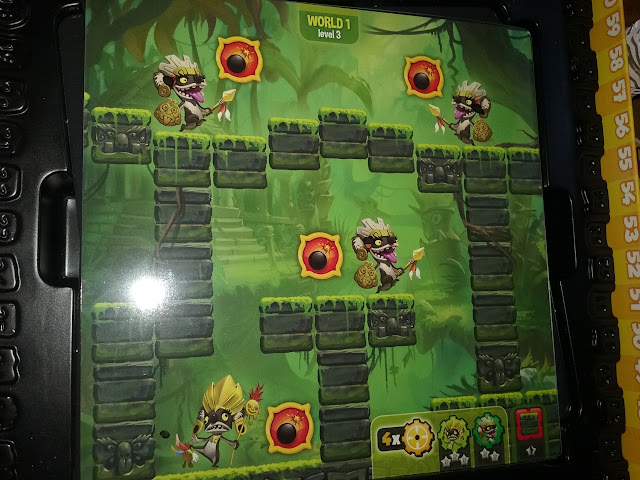 On this level you can use 4 dots to "shoot" the baddies, which makes it feel like a shoot em up.  The variety of different tasks you can do with in a level are great and all culminate towards the boss fight! 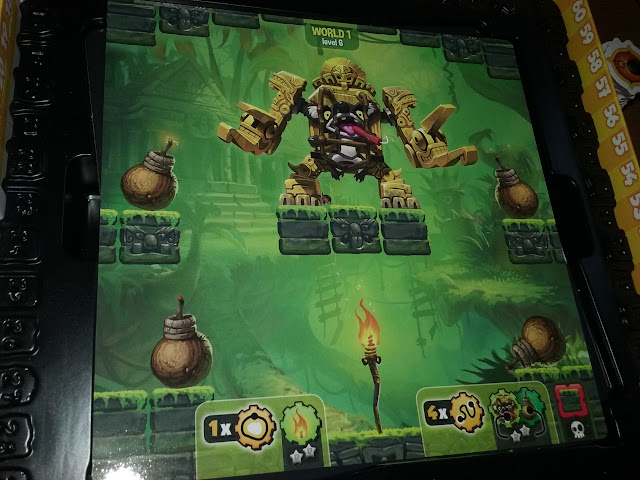 Where you must use four lines to link the bombs to the boss, and one circle for the fire.  I love the theme of each level, with such platform game classics as Aztec level, Egyptian level, ice levels and so on. 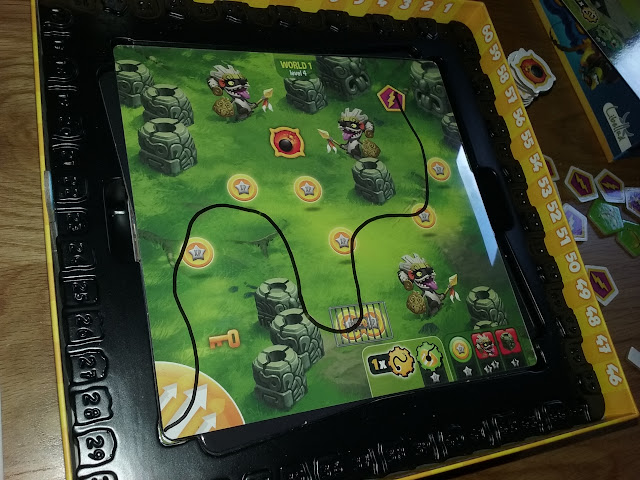 I got to the cage in this one for bonus points, but missed the key so I did not get those extra bonus points.
The levels get progressively harder as you go through them, and the worlds then increase in difficulty, so you can always find a world to match the skill set of your players, or play them all through as you wish for one longer mega gamer. 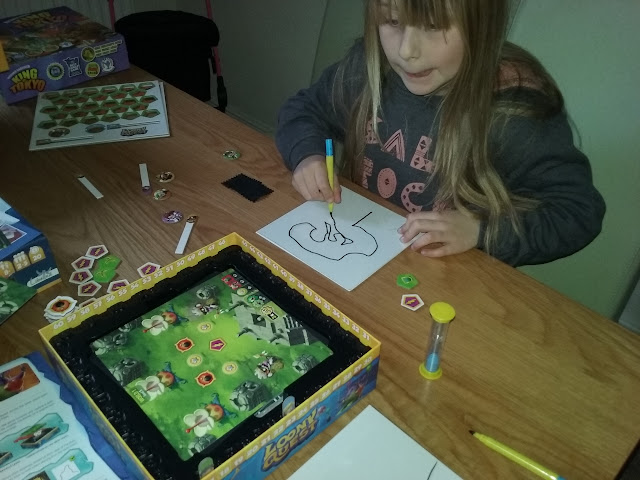 As you can see, Olivias concentration level is high, and with only a few grains left in the timer its tight!

If you go over the bombs, you have to draw one of the trap tokens, as discussed earlier, this could make you draw with the wrong hand, a weird position, or an eye closed.  You can also get power ups, like extra XP, or  a shield which lets you ignore the first baddie or wall you hit. 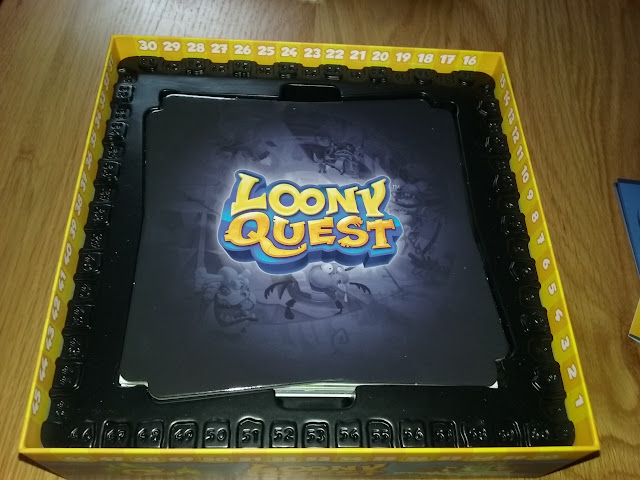 Everything then packs up nicely under the board and is away when you are finished.  Notice the scores in the box which make things nice and easy to keep track of.

Olivia said "I like the pictures, but the drawing can be a bit hard, but with practice I will always win.  Its fun and I like the choice of levels there is lots to play and they look cool.  It feels like I am playing a game on my phone and I want to play all the levels and win on the game"

My thoughts on the matter.....

Its nice quality, and there is plenty to do. For a VERY reasonable price RRP of £19.99 you will get plenty of entertainment out of this, and some nice high quality components with excellent art.  It also is a system that I can see lending itself really well to future expansions of extra level sheets, or you could try making your own as well.

The game is fun, I really enjoyed playing it, it appealed to the inner gamer in me quite a lot, so would be a perfect crossover for those people always playing  phone mini-games as it has that feel, and works really well as a family game, or as an adult party game, and once you are in the swing, there is plenty of laughter to be had either way as certain baddies become your arch rivals always spoiling your score, or you are so far away from where you thought you would be you can not help but laugh, or watching your opponents try to do a challenge with a mosquito token balanced on top of their pen that if it falls off they have to stop until they put it back, and all against the clock still.

The fact you can tailor game length by playing certain levels, or worlds, or making a random draw of them to create some kind of odd hybrid world.

With a very good value RRP  of  £19.99 take a look  here to find your local store and grab a copy, you will have a great time with family and friends.

Come and join us in all sorts of gaming chat in our Facebook group here, and come follow us on Twitter @rollyoursix join the chat, and tell us about your games, and any other good family, or otherwise gems you have found.