A Game of Thrones LCG No Middle Ground chapter pack

Time to delve into the latest chapter expansion pack for A Game of Thrones the LCG 2nd edition.  Its a great game, and my favourite card game of all time, so I was excited to see the latest cards to upgrade the decks. 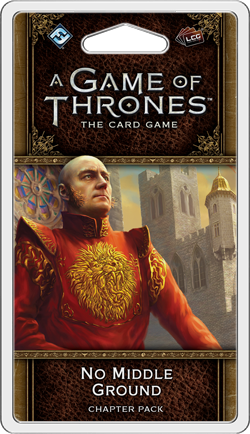 You should have taken the realm for yourself. It was there for the taking. Jaime told me how you found him on the Iron Throne the day King's Landing fell, and made him yield it up. That was your moment. All you needed to do was climb those steps, and sit. Such a sad mistake.”
–George R.R. Martin, A Game of Thrones


In the aftermath of the Tourney for the Hand, Eddard Stark searches for answers to the questions posed by Jon Arryn’s death. Across the Narrow Sea, Daenerys Targaryen rides across the Dothraki sea to Vaes Dothrak with a massive khalasar and her husband, Khal Drogo. The Great Houses stir restlessly across Westeros, watching and plotting their own bids for power. From the sands of Dorne to the icy forests beyond the Wall, tension grows with every passing day.
Enter the unrest and intrigue of A Game of Thrones: The Card Game with No Middle Ground, the fourth Chapter Pack in the Westeros cycle! Like the other packs of this cycle, No Middle Ground follows the events of the first book in A Song of Ice and Fire, introducing iconic characters like Hodor and Gendry to the game for the first time. In addition, you’ll find five new plots in this Chapter Pack—three faction-specific and two neutral—that vastly increase your options for building any faction’s plot deck.


Wit the other pack you get 60 cards.  20 different ones, each with 3 copies to expand your deck. 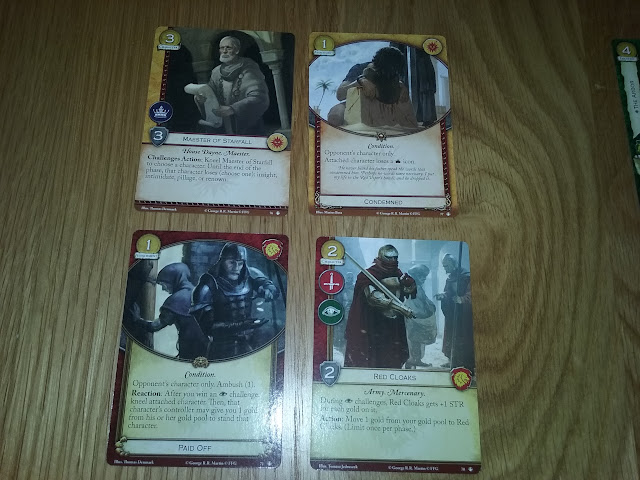 First up for house Martell we have the Maester of Starfall. He costs 3 gold, with 3 strength and has only the power icon.  He does have a very useful action in the challenge phase, where you kneel him to choose a character and then choose a keyword to remove, either insight, intimidate, pillage or renown.  This can help you control the challenge, forcing your opponent to think about when to put his characters with those abilities forward.

Condemned is a 1 cost attachment that makes a character lose their power icon, which can be very handy for shutting down that challenge phase, and stopping characters from blocking your power challenges.  This works after you win an intrigue challenge you can kneel the attached character, then the opponent can pay a gold (if able) to stand their character.


Now for my favourite house, Lannister.  We start with Paid off, which is a 1 cost attachment, that can only be used on opponents characters, and can have an ambush 1 to be played from your hand at any time.   This works after you win an intrigue challenge you can kneel the attached character, then the opponent can pay a gold (if able) to stand their character.  This is a great card, as it forces your opponents to hold back gold to deal with it, and increases your income.  If they do not pay the gold, they end up with that character out of the way for other challenges.

Red cloaks are 2 cost strength 2 with military and intrigue challenge icons.  They have an action that can you move a gold to their card each phase, and during intrigue challenges they can get an extra strength for each gold on them.  This works really well with Paid Off providing the extra gold, though of course gold is never a problem with the Lannisters. 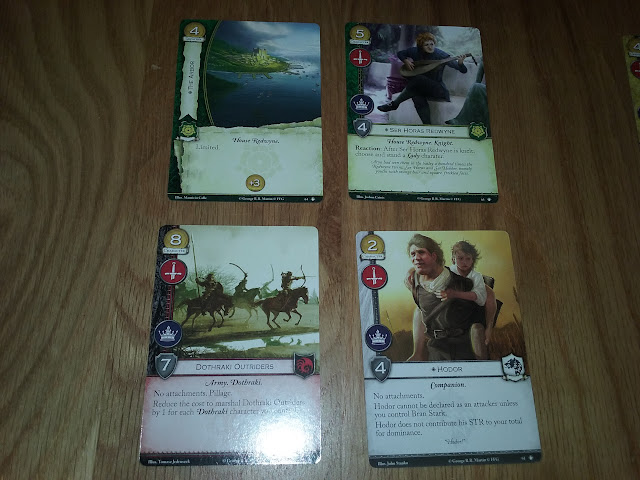 House Tyrell gets 2 cards in this pack, firstly a 4 cost location The Arbor which provides 3 gold per turn income.  Ser Horas Redwyne is a 5 cost 4 strength character with military and power icons.  His reaction is after he is knelt stand a lady trait character.  This works well by using him in challenge to stand other characters for defence, or to buff him.

House Targaryen get Dothraki Outriders, which are cost 8, strength 7 with military and power challenge icons, and pillage so they can remove the top card of your deck if they win a challenge.  They also get 1 gold cheaper for each other Dothraki character you have, so in a themed deck can quickly become a lot cheaper whilst still hitting hard.

House Stark get Hodor.  He costs 2 and is strength 4, with military and power icons, but cannot be declared as an attacker unless you control Bran Stark.  He can still block though, and he also does not contribute his power for dominance, but for the cost he's very good. 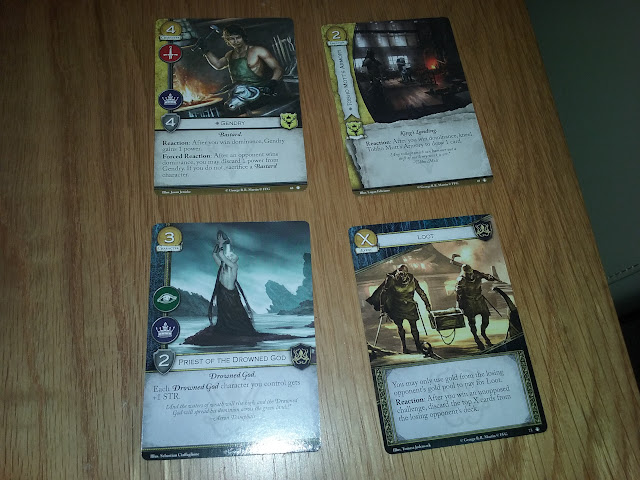 House Baratheon get 2 cards in this pack.  Gendry is a cost 4 strength 4 character with military and power icons.  He has the reaction after you win dominance Gendry gains a power token.  He also has the forced reaction if you lose dominance Gendry loses a power.

Tobho Motts Armoury is a 2 cost location that can be knelt after you win dominance to draw a card. 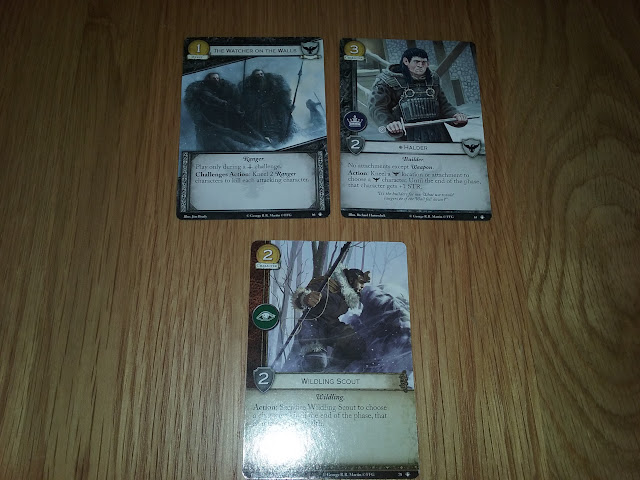 The Nights Watch get 2 cards in the pack.  The Watcher on the walls is a 1 cost event that can only be played during a military challenge.  It lets you kneel 2 Ranger trait characters to kill each attacking character, which can be brutal if they are attacking with multiple characters.

Halder is a 3 cost 2 strength character with the power challenge icon.  He has the action, kneel a nights watch attachment or location to give another Nights Watch character +1 strength. 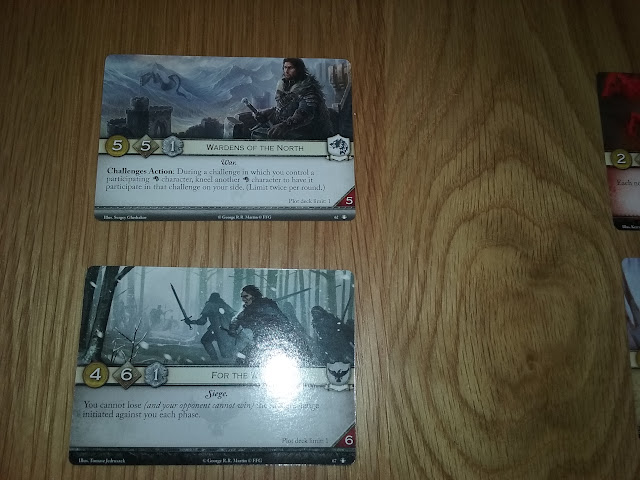 Now for the plots that come in the pack.  Wardens of the north is a House Stark card with income 5, initiative 5,  claim 1 and reserve 5.  It has the challenge action that during a challenge that has a Stark character involved you may kneel another Stark character to have it join the challenge.  Very handy for when your opponents have declared blockers, to push the win through.


For the Watch is a 4 income 6 initiative, 1 claim plot with a reserve of 5 that is for the Nights Watch only.  Whilst active you cannot lose the first challenge initiated against you each phase. 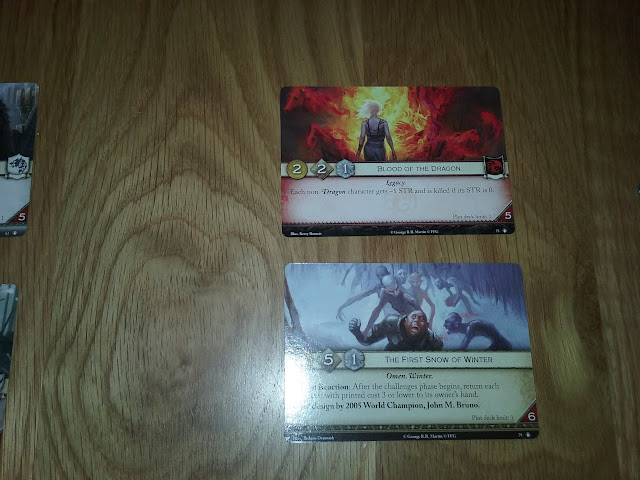 Blood of the Dragon is a house Targaryen plot only.  It has an income of 2, initiative of 2, and claim of 1 with a reserve of  5.   Each non dragon character gets -1 strength whilst this is in play, and if their strength is reduced to 0 they are killed.

The First Snow of Winter is a 3 income, 5 initiative, 1 claim card with a reserve of  6.  When this is your active plot before the challenges phase return all strength 3 or lower characters to their owners hands. 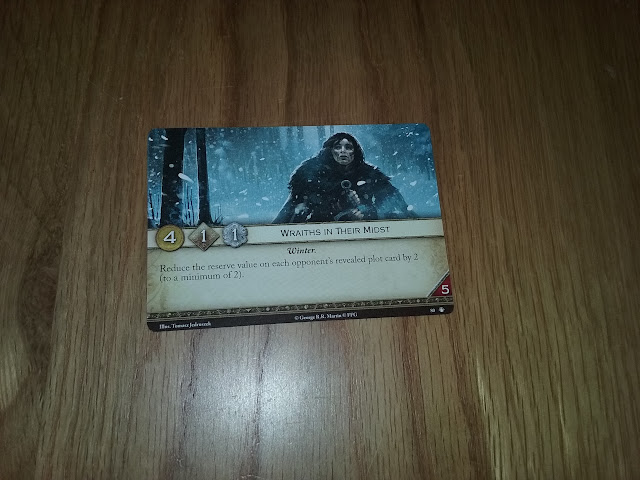 Wraiths in their midst has an income of 4, initiative of 1, claim of 1, and reserve of 5.  When it play it reduces the reserve value of your opponents plot by 2, to a minimum of 2.  Very useful to drop down the enemies options.


This is another excellent pack, providing plenty of new options in new cards, and new plots to hone your deck, or change your play style completely with new options.

I love things that are making the older cards more valid.  Take Priest of the Drowned God for instance, all those character traits we saw earlier that "Drowned God" and wondered... now we know, these guys will make them into a powerhouse, and its another way you can theme your deck even more into a religious zealot version of the Greyjoys.

You can pick up your own pack to expand your choices with an RRP of £11.99 from your local game store