The Romulans once more get reinforcements, which pleases Olivia,  and another ship for the Enterprise era is most certainly Welcome.  Though of course you can play it in any era you choose.

Romulan Birds-of-Prey were starships used by the Romulan Star Empire in the 22nd century. Green in colour, they were so named due to their distinctive avian appearance. They were equipped with disruptor banks, as well as advanced cloaking technology. 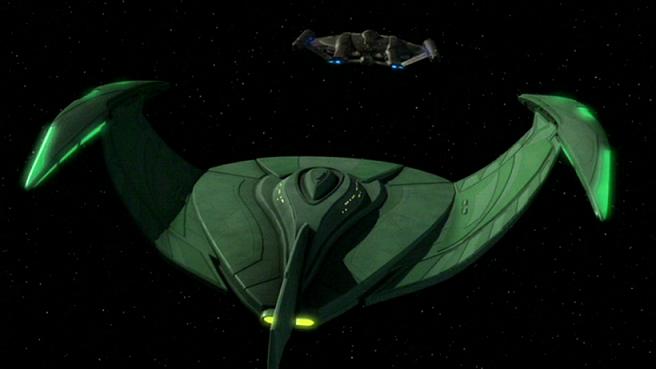 These vessels were first encountered by Starfleet in 2152, when the Enterprise NX-01 inadvertently encroached upon a Romulan-claimed star system, which was protected by a field of cloaked mines. Although Enterprise's quantum beacons proved successful in penetrating the mines' cloaks, they were useless against the Birds-of-Preys' more advanced cloaking devices. 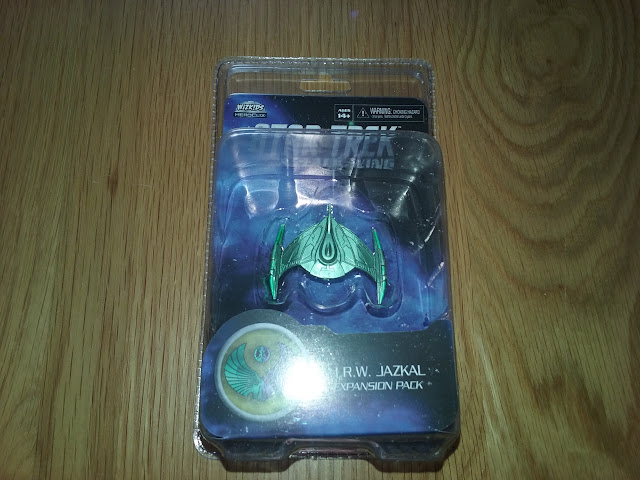 So lets see what this little ship adds to the game...... 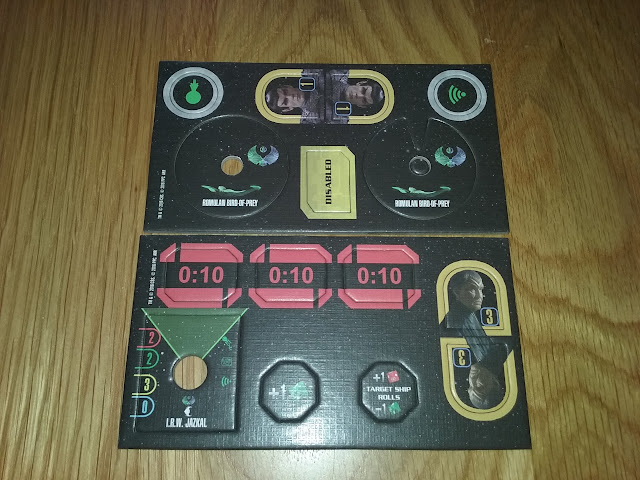 Plenty of nice quality tokens as always, though again missing a target lock.  And shields, but since the ship does not have any shields anyway its not a problem! 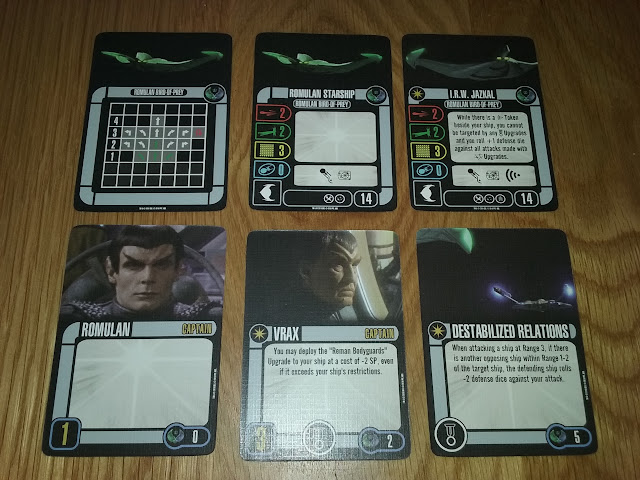 Shes a very nimble little beast, with only one red move, and that is the 3 speed comeabout, otherwise a good dial with plenty of green.  As always you get a generic ship and captain, and the named Jazkal.  Her stats are low across the board, but you must remember she is cheap, and this is the Enterprise era as well which the points reflect.  Her named ability is whilst you have a scan token you can not be the target of any elite talent upgrades, and you get an extra defence dice against any secondary weapons, which is handy against torpedoes, and aft weapons used by those pesky Vulcans and NX Enterprise.  She only has 3 actions, evade, target lock and scan.  For captains we have Vrax, at skill 3 with an elite talent for 2 points hes a good option, and his ability allows you to take Reman bodyguards for a 2 point discount even if it exceeds your ships restrictions, so you can always get him on which is nice. The Elite talent of the pack is Destabilized Relations, which is a nice passive ability that always works, and when attacking a ship at range 2-3 if their is a friendly ship (to them) in range 1-2 of them they roll minus 2 defence dice, which is good to get though hits through. 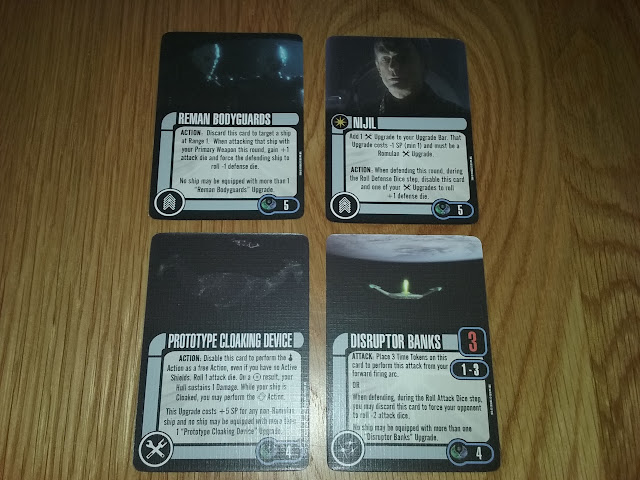 For crew we have Reman Bodyguards that are an action and discard to target a ship at range 1, and when you attack with primary weapons you roll one more attack dice, and the target on less defence dice, which can make this little ship swing for  4 at range one which is fairly respectable.  Nijil adds a tech slot to your upgrade bar, and discounts that tech by 1 as well.  He also has an action that you may disable him, and one other tech upgrade to roll an extra defence dice, which can be handy when you know you are going to get hit hard.

Prototype cloaking device is a tech upgrade that as an action and disable gives the cloak action as a free action.  You then must roll an attack dice, and if you roll a battlestations your hull sustains a damage.  Whilst cloaked it also lets you perform the sensor echo action.  Its potentially risky, but cloaking int he Enterprise era can be really powerful, suddenly the ship has a bucket load of defence dice, and since it did not have shields anyway you are not losing anything, well maybe a hull point!.

Disruptor banks are a 3 attack weapon, range 1-3 that when fired has 3 time tokens put on it.  You can also use it when defending by discarding it to cause your opponent to roll 2 less attack dice, which in some cases can stop the attack completely, or make it so they can not do enough damage to destroy you, letting you live on for vengeance. 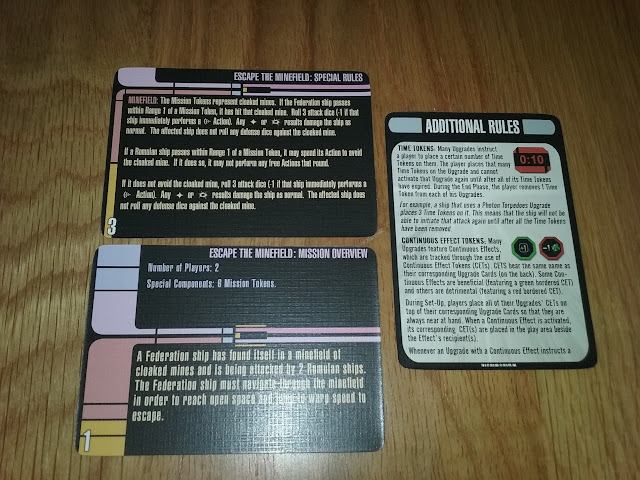 The mission is escape the Minefield, which is based on an episode of the Enterprise show, where you are chasing your enemy through a cloaked mine field so its not just the ship you have to watch for but the mines as well. 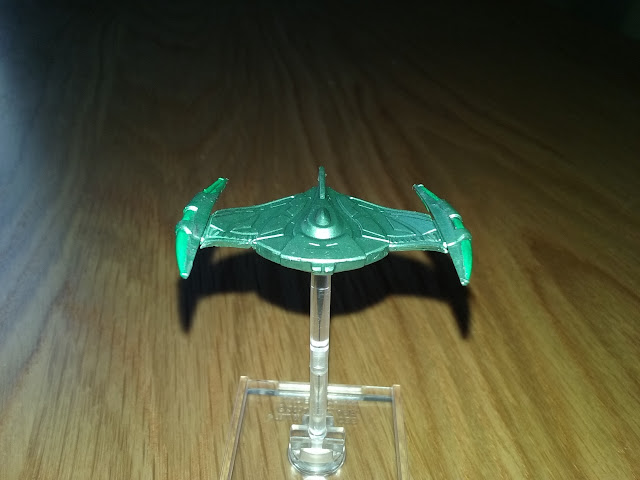 I really like the model, the metallic green suits it, there is plenty of detail on the ship on as well. 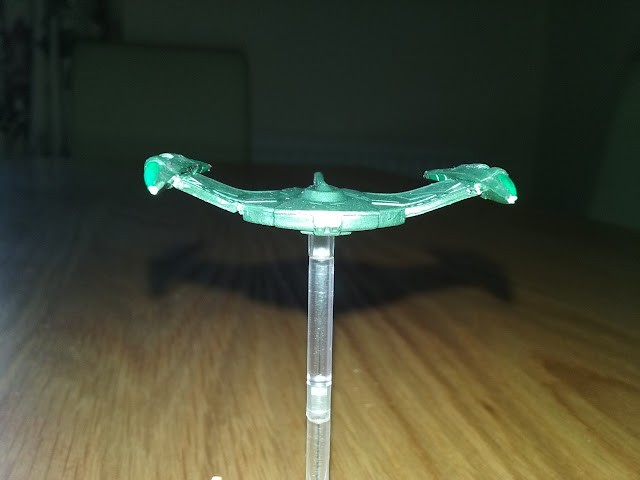 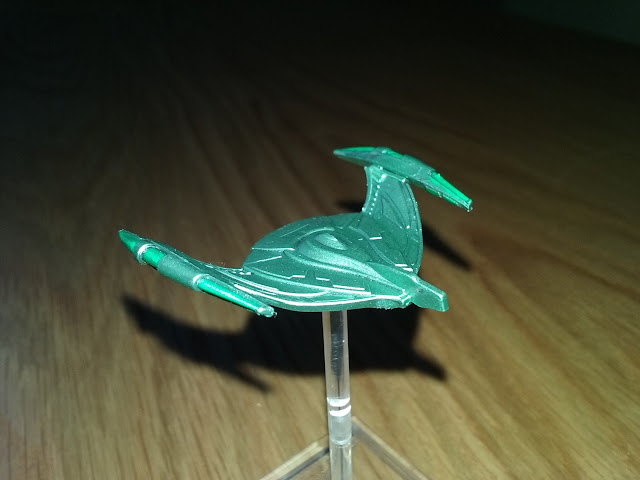 I really like the model, and another ship for that era as well.  Its a great pack well worth grabbing.


You can pick one up by finding your local game store here with an RRP of £12.99 it will add a great ship and solid cards to your fleet to bring glory to the Romulan Star Empire and re-enact some of those battles from Enterprise.

Come and join us in all sorts of gaming chat in our Facebook group here, and come follow us on Twitter @rollyoursix join the chat, and tell us about your games!
Labels: Attack Wing Star Trek