Upper Deck have created plenty of solid multiplayer and solo play cards game int he encounter and legendary series that caters for all tastes, such as Marvel Legendary Villains or perhaps sci-fi is more your thing with Legendary Encounters Firefly.  Maybe you would rather go for a classic 80s movie and relive it in card form with Legendary Big Trouble in Little China

There are so many options but my personal theme win in the range was Legendary Encounters Alien  I loved the films, the game theme fit perfectly, so go over take a look, take a read, as today's game operates in pretty much the same way with some tweaks we will come to. So what could match Alien in theme at least? well Predators right!!  The first Predator movie was amazing, and full of such good action and quotes.. are we going to see that reflected here?


Legendary Encounters: A Predator Deck Building Game is based on the first two movies of the Predator series. Taking on the roles of characters from the films, players take turns recruiting cards for their deck from a central selection in order to improve their deck and defeat Predator cards that are added to the central game board. 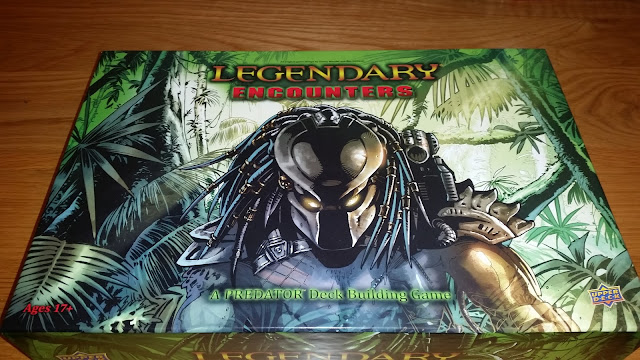 In more detail, within the setting for each film you can play as the humans or as the Predators. As the humans, you play the co-op version of the game as in Legendary Encounters: Alien, recruiting, scanning and attacking the same way while trying to achieve objectives. When you play as the Predators, the game is player vs. player instead of co-op, with each player assuming the role of a Predator hunting for the most honor (VPs).
Legendary Encounters: A Predator Deck Building Game is a standalone game in the Legendary Encounters series that is fully compatible with Legendary Encounters: An Alien Deck Building Game. Specifically, you can use the Predator deck in Alien or the Alien deck in Predator. Similarly, Predator is also compatible with the Marvel superheroes version of Legendary but cannot be fully integrated just due to the difference in hive decks and masterminds.  Mixing in with Aliens..... that i like the sound of.. if you forget the awful AvP movies, and remember the Great PC game from the early 2000s 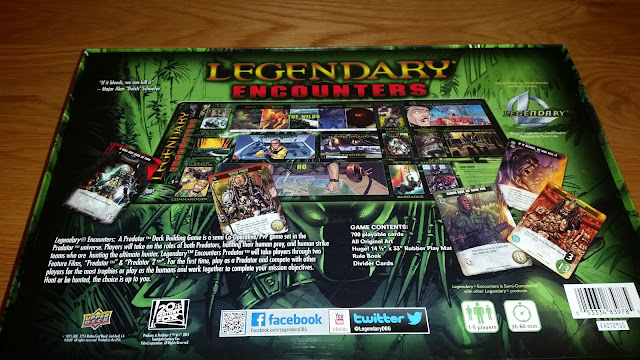 so what do you actually get in the box? 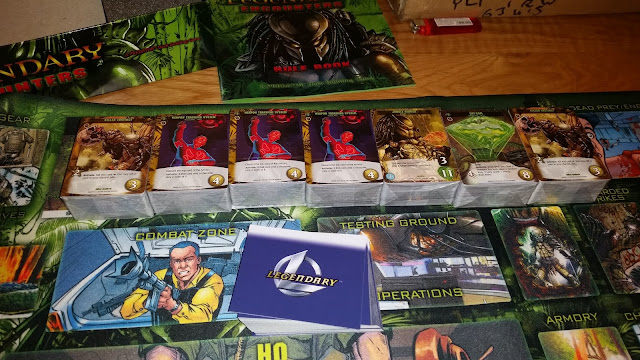 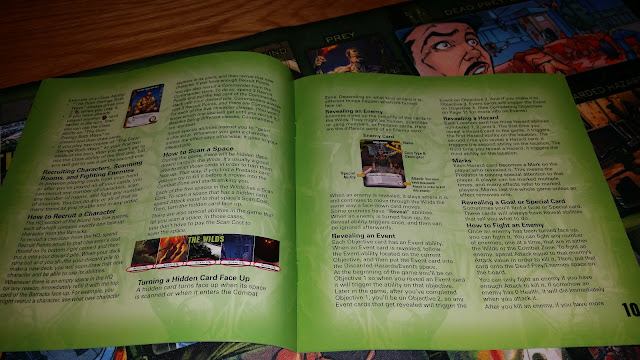 The rulebook is nice, plenty of images, easy to read as well and reference, andnot as scary as the sheer amount of cards int he box may make you feel. 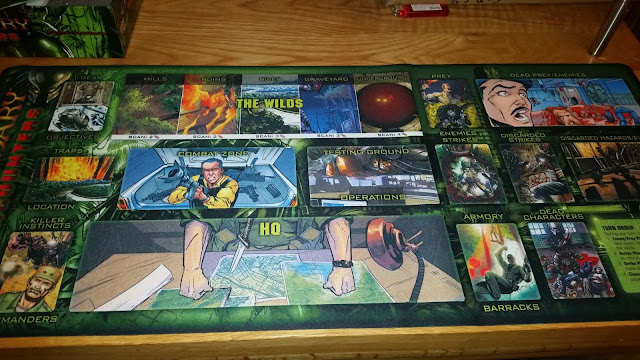 The playmat is the usual high quality mouse mat style material, you can roll it, and unroll it nice and easily with no trouble and the art is great on it, which is good, as some games have had dodgy art in the past.... im looking at you Firefly! 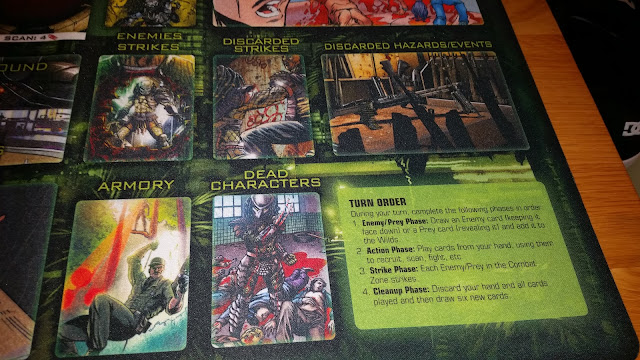 As with the other games it has a handy Turn order on the bottom and the spaces for all your different cards.

You do actually get 2 games.... well more likely 2 variants. One game (players as Humans) plays the same as Aliens. Same mechanics, same game play, same concept, fighting off predators, trying to survive and win.  First you assemble an opposition deck. It's made up of three Objective decks, 1, 2, and 3. Since this is Predator, the first three Objectives make up the first movie, and the second three Objectives make up the second movie. Or you can mix them up. Objectives 1 and 2 from the 2nd movie, objective 3 from the 1st movie. however you may wish, they are all thematic and fit, so I would keep them separate myself, but your choice of course. 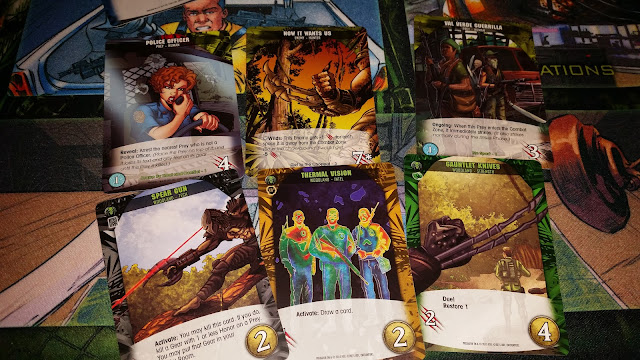 The art is on average very good in this set, plenty of images that fit the theme perfectly, follow the films, and have great quotes too.


Then you pick four character decks. Each one has 14 cards of four different types with a distribution of 5 - 5 - 3 - 1. There are eight decks to choose from. Dutch is one deck, Hannigan and the other characters. Four are from the first movie, four are from the second. You shuffle them together and that creates your Barracks deck. You then deal out five of those cards into the Barrack spaces on the playmat. 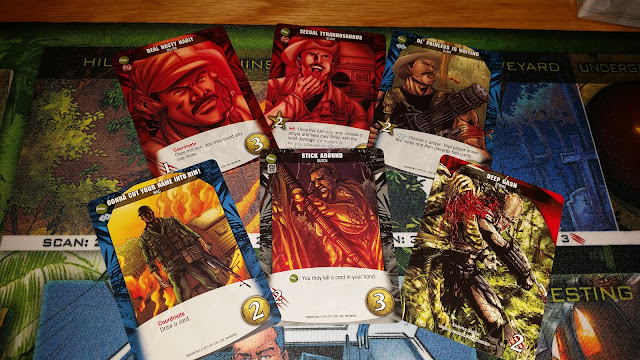 Like most deck builders, you start with some generic cards. Twelve in this case. Five give you 1 Combat, seven give you 1 Recruit.  Lastly you pick or are randomly assigned an Avatar. They're generic titles like Radioman, Lieutenant, CIA Agent. The Avatar gives you a 13th card to put in your deck, and determines your hit points.

At the beginning of each players turn, you draw the top card of the Enemies Deck and place it face down onto the first of five squares: "The Wilds." If there's already a card there, push it left into the next square. If you reach the end of the five-square row, the card is flipped face up and enters the Combat Zone.  You can scan enemies in this zone to flip them over to find out what they are.

Then you can play cards from your hand. You start with six cards per turn. The Legendary system juggles two resources: Recruit and Combat. Recruit is typically used to buy more cards from the selection of five in the Barracks and improve your deck. Buy a card, draw the top card of the Barracks deck to replace it. There are also Commanders, who always cost 3 Recruit, and have the Coordinate ability and 2 Recruit. Which means someone else can play them on your turn to benefit you. Then they draw to replace the Coordinate card they played. 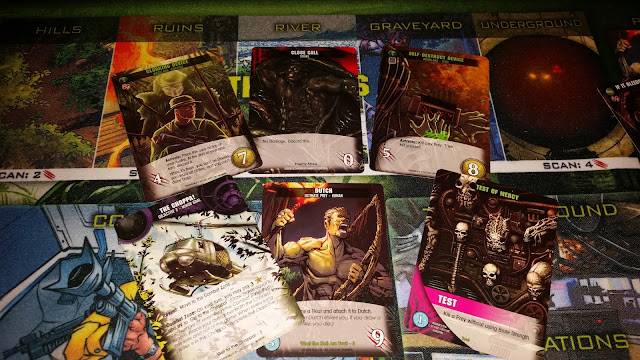 Combat is used to fight those cards moving across the track and in the Combat Zone. They have a combat rating. Since this is co-op, you defeat them and they're gone. However, you can't fight a face-down card until it's flipped face up by Scanning. That also requires Combat: 4 - 3 - 3 - 2 - 2, depending on which square of the track and how close it is to the Enemies Deck. The further away, the lower the combat to Scan. And... the less time you have to fight it once it's revealed.

Some other cards from the Enemies Deck may require Recruit to fight. Or have other conditions and requirements. They may also have conditions printed on the card.

You can fight cards in the Combat Zone. But at the end of the turn any cards still in the Combat Zone will each inflict a Strike on the person whose turn it is. There's a Strike deck, and a Strike could do 1 to 4 hit points of damage, or perhaps another effect. Take as many hit points as your Avatar has, and you are dead and out of the game, the game ends when you all die, or complete the final objective in the deck.  It can  easily be played solo too so thats a huge bonus.

Each Objective Deck has something you need to complete to move onto the next Objective. The means to complete that objective is in the deck it belongs to. So if you have to find and destroy the guerilla camp for Objective #1, (just like the film) one of those nine cards will be the guerilla camp and have instructions on how you destroy it. The third objective is survive or kill the main Predator. There's a minor goal that allows you to survive, because beating the main Predator is pretty difficult, but not impossible.

The other way to play has the players playing Predators. You assemble the Enemies deck (now the "Prey Deck") the same way. Except there are two new sets of 3 Objectives each, which tell the story from the Predators' point of view. Instead of Young Bloods, you shuffle in Mercenaries, which are human cannon fodder you must kill.

Instead of Commanders, you have Killer Instinct cards. You also have Trap and Gear cards, which are set to the side. If you want to make things more complicated, there are also Tests that can be shuffled into the Prey Deck, which really give it an almost RPG feel.

Instead of human Avatars, there are five Predator Avatars. You get the same 12 generic cards. There are also Challenges for those who want a more complicated game. One is dealt secretly to each player. If you accomplish something by the end of the game, you get Honor, which any fan of the films know is important to predators.  Killing with honor is good, but there are ways to lose it, some cards may seem great, but you lose honor for playing them which represents the predators doing something ignoble.


All of the cards in the Prey Deck, and the Gear, and the Traps, and the Tests, have an Honor rating. If you defeat them, you add them to your Trophy Pile. The player with the most Honor in their Trophy Pile at the end of the game wins.


Cards come out of the Prey Deck and move across The Wilds just like in the Humans game. They come out and typically stay out face up unlike when you are the humans. They're tough enough already.  They get to the Combat Zone, they start Striking Predators. Predators have their own Strike deck, and can lose Honor as well as Damage from Strikes.


If a player dies, everyone else gets one more turn and then the game ends as the dead player's Predator hits their wrist bomb and blows up the game. Or you can defeat the Ultimate Prey.

If you want to do Aliens v. Predators, there are rules to convert the Alien cards into the Predator part of the Predator game giving you much more replay, more variety and more fun to be had.

So its got two games modes, plays solo, plenty of theme..... and can be mixed in with Alien too... all great things!  Its not complicated to play, though sorting the cards out is... not fun. but it is worth doing, this game should should provide you plenty of fun.

With an RRP of £49.99 this is a must have for any Predator or Aliens fan for crossover fun, card gamer or Legendary fan..... its excellent, and full of theme with different play modes too, so Head on down to your Local Game Store and grab a copy, you will have a great time solo with it or with friends.