In the final part of our look at the currently released games in the Titan range we look at Running with the Bulls by Paul Peterson.  We have already looked at the fun Hive Mind and the OK Menu Masters, so how will this one fair? 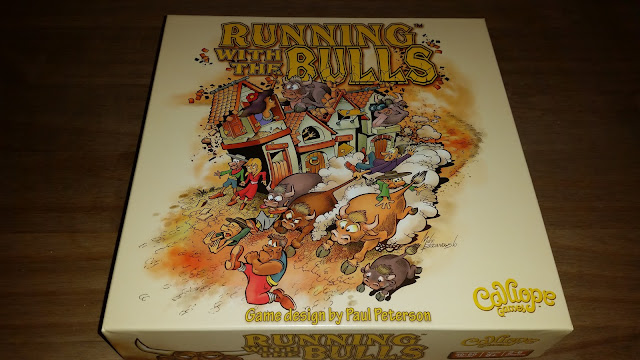 Running with the Bulls™ is a game for 2-6 players played over three rounds called “days.” During each day, players will use action cards to guide their Runners to destinations at the bottom of the board—all while trying to avoid irate bulls! The player with the most points at the end of the game wins! 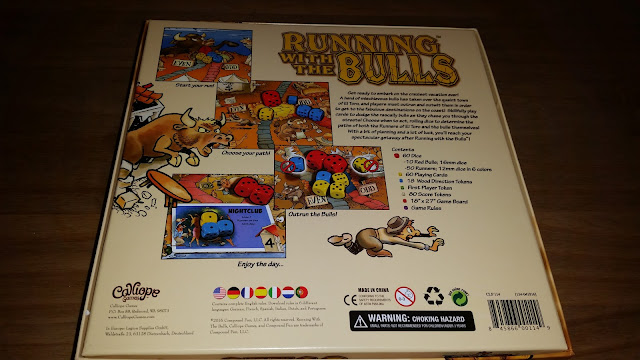 The art on the box has to me anyway a bit of a late 80s, early 90s style, I cant really place why... but it just gives me that impression, now that's not a bad thing, as I kind of like it, it feels nostalgic, and that's a good thing for a family game.

Now lets pop the box open, and take a look and see what we get inside! 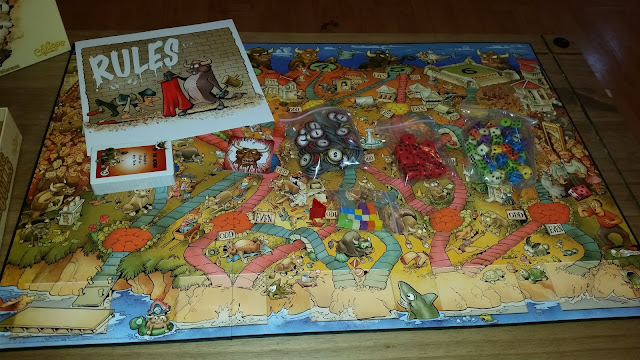 You get a really nice, if somewhat busy board, which is a real pleasure to look at all the fun little thing's going on, you can really get lost in it, but make sure you don't!  You get a rulebook, that like all the other Titan series games is a pleasure to read 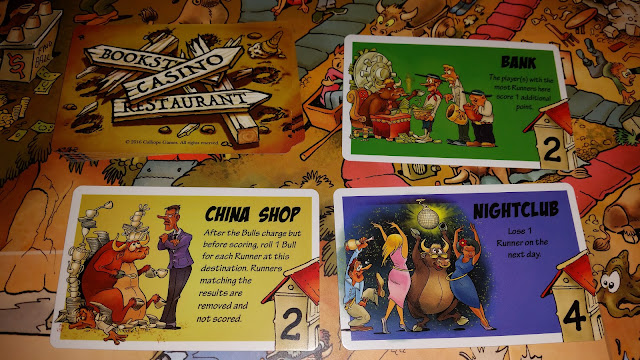 You get a deck of locations that you shuffle and deal out to the bottom of the deck each day/round that give you an amount of points for each of your dice/runners that end up on them, some also give you other effects, bonuses, and negatives too potentially. 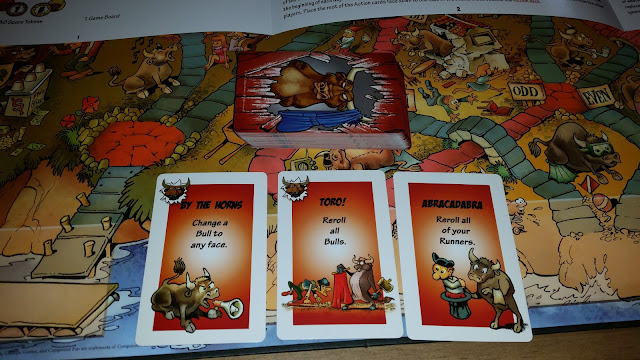 Each day, each player will have a hand of 5 of these cards in their hand, and they must play one each round, that can really effect other runners. or the bulls. 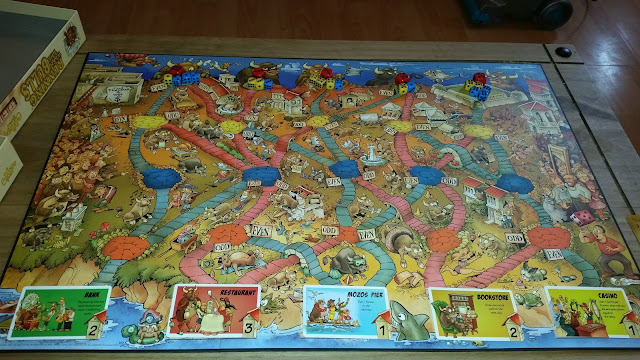 Each player begins the game with a number of matching colored dice (determined by the number of players) along with a hand of five action cards. The dice are rolled and placed at the top of the board in their matching numbered spots (2-5), with ones being wild and allowed to be used in any starting space.

The larger red dice represent the bulls, and are rolled and one placed on each space.

On your turn, each player must play one action card, which is resolved immediately, then all runners are advanced down the track according to the signs on the paths. If there is only one path, all dice are moved along it. Multiple paths have signs labeled either “Even” or “Odd”, and dice are moved along it depending upon what they show.

Lastly, the bulls move and try to charge.  They move along the path in the same manner as the runners, but at the end they charge and try to trample them. Each runner whose die matches the value of the bull must reroll in an attempt to escape the charge. Roll a different number and that runner is safe, keeping his new result. Roll the same number as the bull and that runner is trampled and removed from the round, but will come back for other rounds. 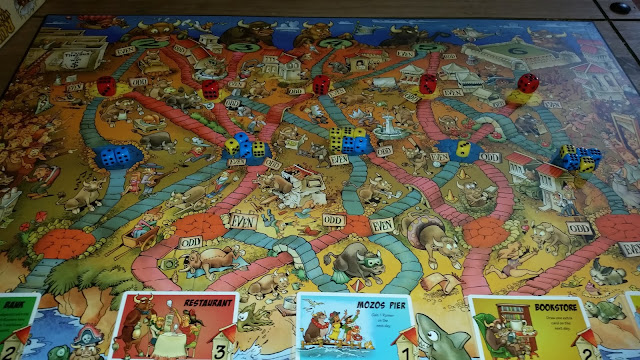 Once the runners reach the destination cards at the bottom of the board, each player receives the ncie card score tokens equal to the amount on that particular destination card and  then applies any penalties or bonuses also listed on the cards as we mentioned before. 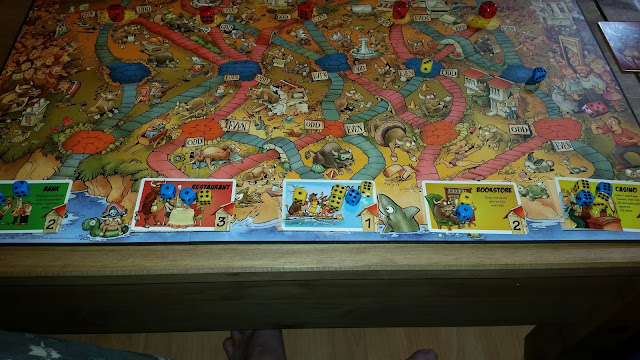 Discard any action cards you no longer want and draw back up to five, reset your runners at the top, including any that were trampled, but not ones that destination cards said you may lose, like the night club,  and reset the board with new destination cards. And play the next day, at the end of 3 days the most points is the winner!

This game is super simple to play, and real easy to teach, and is actually very fast and fun, it reminds me of one of those Japanese arcade pachinko machines with things dropping down and splitting and moving, though not so much bouncing around!

Its a light hearted game, and really is suitable for all ages, its fun for younger players, its fun for adults too, its a real home one with this one, and certainly my favourite of the Titan series so far!

I had loads of fun with this one, I love rolling dice, so its going to be fun for me, but its not all random, the cards can be used to have good effects and make you reroll if you think a bull is going to get you.  I think all ages will like this and its good for boys or girls.

If you think its for you, head on over to your local game store and ask them to get it in for you.