Calliope games are not a company I have really come across before, but they are trying a rather bold new endeavour with gaming, and they are calling it the Titan Series......

Quite an impressive goal.... but will it work out? well I have had the chance to have a look at the first three offerings in the Titan range... starting with Menu Masters designed by Zach and Jordan Weisman. 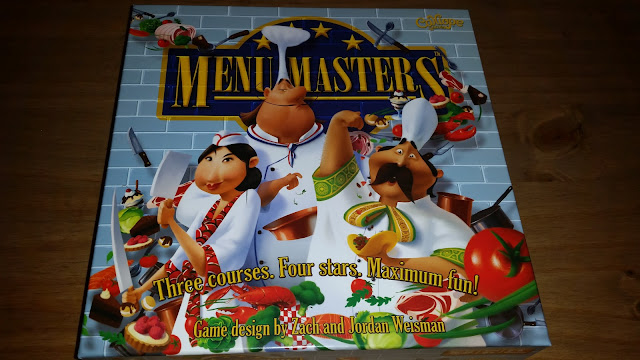 The art is certainly "Family Friendly" but what about the game itself? 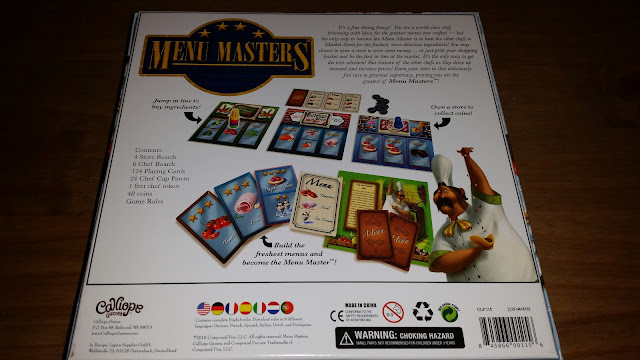 Calliope describe it as.....
It's a fine dining frenzy!  You are a world-class chef, brimming with ideas for the greatest menus ever crafted — but the only way to become the Menu Master is to beat the other chefs to Market Street for the freshest, most delicious ingredients! You may choose to open a store to earn some money… or just grab your shopping basket and be the first in line at the market.  It’s the only way to get the best selection! But beware of the other chefs as they drive up demand and increase prices! Earn your stars in this deliciously fun race to gourmet supremacy.
So there's theme anyway to get you involved! lets pop the box open, take a look and see how it plays.... 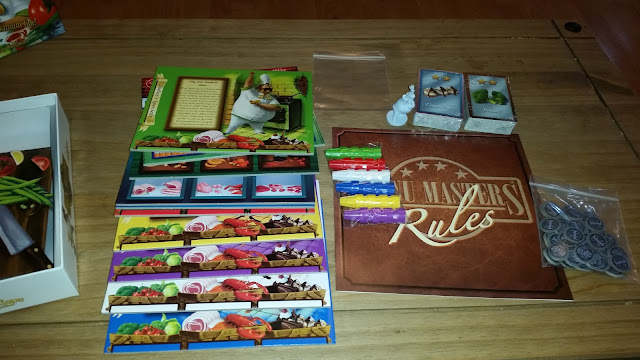 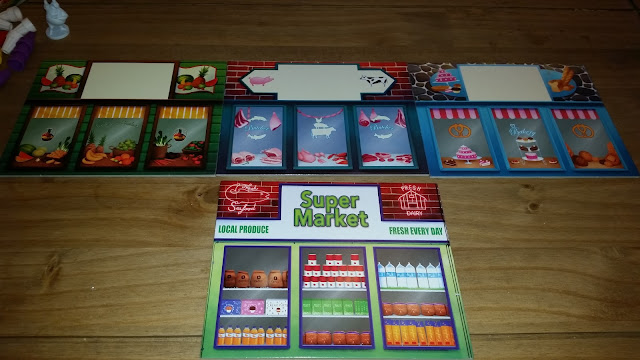 To set the game up, you put the shops out, only put the supermarket out if its 5 or more players. 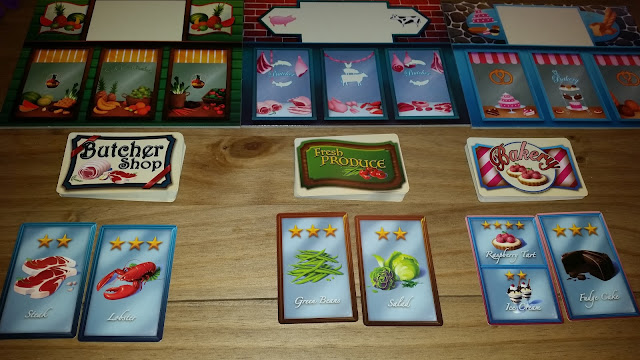 Each of the sotres has a corresponding deck of ingredient cards that can be purchased from there, each with their own star rating for quality, (stars are what give you the points at the end of the game) some cards are two ingredients, so can be used as either one if you need to.  The art on the cards is great, nice and bright, and the backs are all very different to make it nice and easy to sort to go on their respective tiles.  The supermarket tile if in play, would get one from each of the stores. 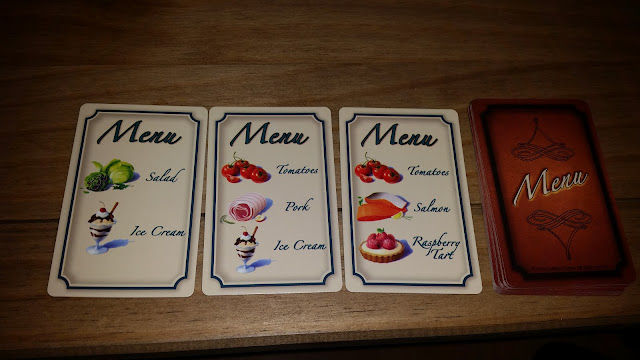 Each player is dealt 2 menus at the start of the game that they keep secret, here it shows you the ingredients needed to complete the dish in question.  once you have those ingredients the dish is complete, and you draw another one, first chef to 3 completed wins, if its a tie the stars are counted.  These are nicely laid out, but I wish they where actual dishes, and had titles, rather then a generic menu.. such as you are making beef wellington, or a  strawberry ice cream sundae etc. 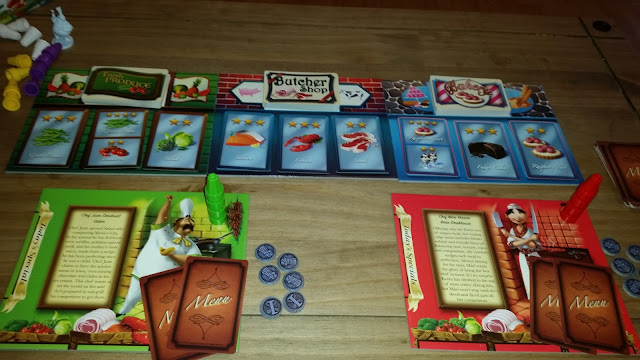 Each player picks his own lovely colourful chef board, and on each is a nice backstory for each of them, and they colour match the relevant plastic chefs hats... which if I am honest look more like marker pen lids! I see why they did it, so they would stack, but... yeah more pens lids in my opinion, which is a pity, as the first player chef model is really rather nice.  Then Each player gets his two menus, 6 coins, and his hats so he can go shopping.  The decks are assigned to their relative store tiles, and 3 goods laid out on each of them. 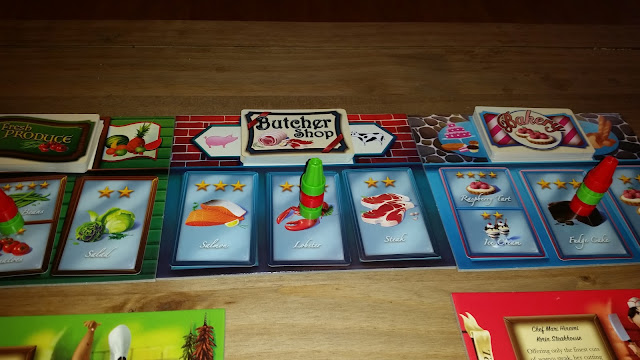 this is where things get interesting... each player takes turns placing their pen lids.. I mean chefs hats on the board in some way... they could place it in a shop... but not the item specifically, if they place first, they get first pick.... or they could place their hat to one side to earn an extra coin, or they could place it on the top of the shop to take the role of the shop keeper, but then they can not purchase anything from that shop, and only one hat can be there.  For buying goods you can stack up, but the thing is the more hats, the more you have to pay, so in the picture above, each purchase will cost 3 coins, as there are 3 hats, if there where 2, then it would 2 coins and so on.  The order of hats dictates the choice.  If you are the store owner, you get the money that people would pay for the goods, so in multiplayer games you can really start raking it in, but make sure you do not need anything from that store yourself as you are not allowed to purchase from one you own for the turn.

When everyone has purchased, they reclaim their hats, complete any menus, and the turn starts again with the next player going first and so on until 3 are completed. 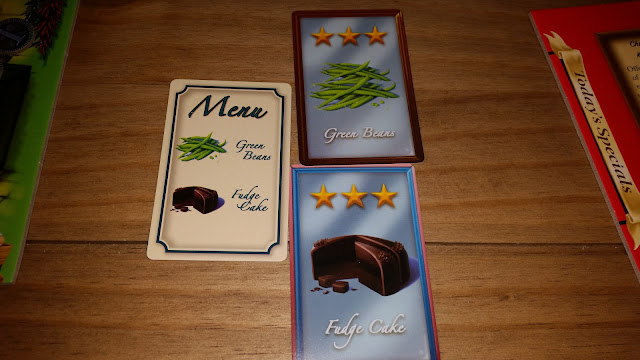 To complete a menu, you just need to purchase the matching goods, see here I have both, and a total of 6 stars for it as well.

There are some nice sneaky mechanics you can perform during the bid phase, you may see an opponent only has a  certain amount of coins, and needed both vegetables and sweets, so you may bid up each, making them have to choose only one or the other. It may be subtle, but the game does give you the ability to mess up your opponents plans.

At its core its a mix of game mechanics, set collecting to match menus, and bidding, with also some bluffing about where you may place, as you may just put a hat in to drive the price up, but not buy.  This may annoy some of the more younger gamers, if they are a bit delicate, but Olivia enjoyed ruining my menu plans.

So is it any good? well.... me and Olivia have a difference of opinion on this one, Olivia likes it, thinks its fun, I think its... well its ok.... but why ok? well on the whole the components are nice, but the chefs hats are not great looking, and I wish the menus where for actual dishes, rather then just a mix of finished products I mean who wants green beans for dinner and then fudge cake? well Olivia might... but most people not.  I feel its a little too "soft" for the more hardcore gamer, but is good for a family entry game, for people coming from monopoly, or game of life, as it feels slightly above that level in both components, and mechanisms involved.  so really going on what they where aiming to achieve, it would seem they have! its not a bad game, I wont say no if asked to play it, but in my opinion there are other games that for me are entry level I would rather play, such as Ticket to Ride or Pandemic but then they might be slightly high if there are younger gamers involved.  Really this one needs to be chosen for its suitable audience, if you haven't delved deeper into games yet, and you have a young family... its well worth trying out with them, the nice art and quick play will be enjoyed, but if you are already playing deeper games with them, it may not be for you.

I like getting the food to make my menus, its fun and making dad pay more for things and seeing him sulk is funny! its a fun game I think all children my age will like it, it is not hard to understand.


if you want to check out the rules for yourself, you can download them from Calliopes Website
and if you think its for you, head on over to your local game store and ask them to get it in for you.