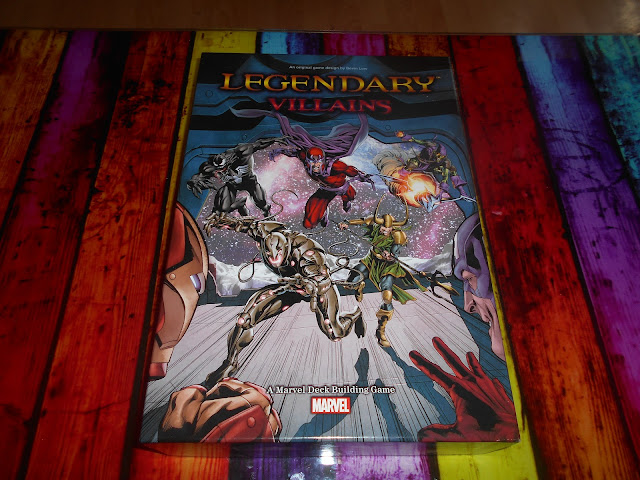 Players can work both with and against other players to overcome the protectors of the city using the greatest Super Villains in the Marvel Universe! The game will feature some of Marvel’s greatest Villains, including Venom, Magneto and Thanos, as they go to battle against some of the most heroic characters in the Marvel Universe, including the X-Men, the Avengers and Spider-Friends!

So this is a solo, or cooperative game, which is really nice, i love the addition of a solo mode on a game. 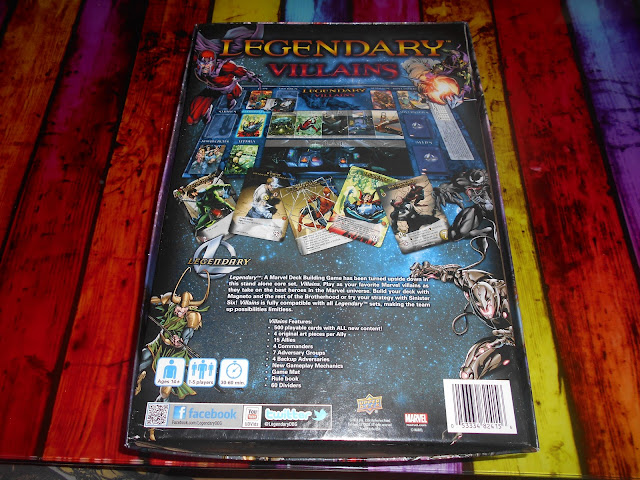 You get a ton in this box, 550 cards!! plus rulebook and a lovely mousemat material  style play mat. I will only show a few examples of the cards.  I do have to say though, open the subject of the cards, they are excellent quality, some of the best I have ever seen in terms of printing and how they feel.

Lets take a look at whats in the box, and a run down of the characters we can expect to see.... 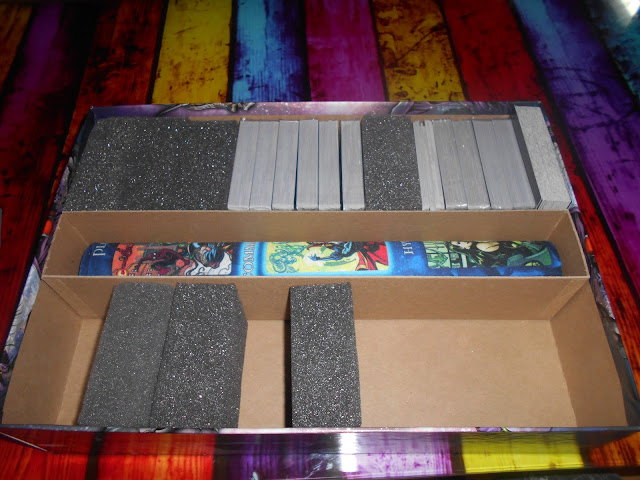 I really like the divider cards, and foam to help sort your cards and keep them safe.

Components
Rule book, game mat, dividers, and 550 cards (including 33 blanks you can use as dividers)

Legendary: Villains can play 1-5 players cooperatively and this time you get to be the bad guys as they try to stop the heroes from completing their missions. It is fully compatible with the original Legendary and all of its expansions, which is nice as if you get into this from this game it will open up a whole world of potential. and its always fun to try playing as the villains as a change. 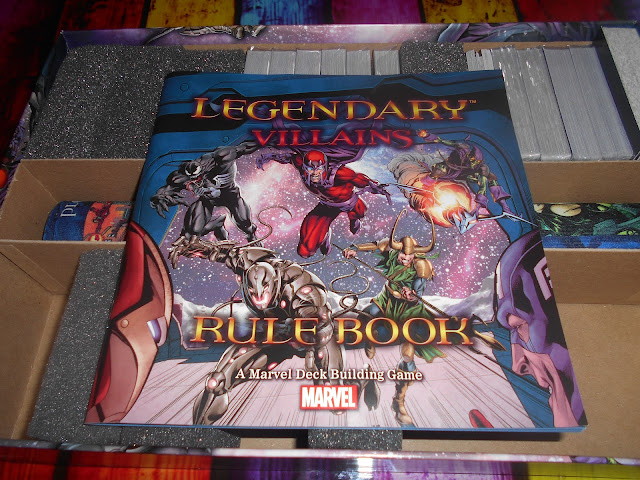 The rulebook is full colour, and nice quality, with plenty of diagrams in it to help you get playing. 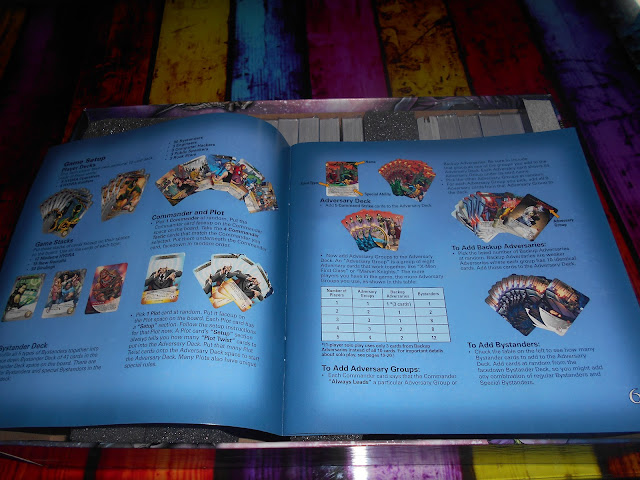 This is a cooperative game, or solo game, and its you vs a primary antagonist, which in this case is the Commander such as, Nick Fury, Professor X, Dr. Strange and Odin. Each Commander provides a different level of challenge, some easier than others, as they possess unique health, traits and abilities. In order to defeat the Commander, you must hit him four times before he completes his plot, of which there are eight different ones to choose from, so even the same Commander can be different playthrough to playthrough. Each plot dictates how things play out, and the overall "plan" of the Commander ensuring a high replay value, and combined with the expansions available there is a huge amount of options.

Your cards either have strikes (attack value) or coins recruiting cost.  You then start to build your deck with basic cards, recruiting from a selection of villains who are in the lair to join your deck, and then be shuffled in again giving you better abilities.  Each time you recruit, another card is flipped over to the lair giving you options. The play mat is stunning, and has everything clearly laid out on it, includes play steps, so you always know where things need to go, and whats next. 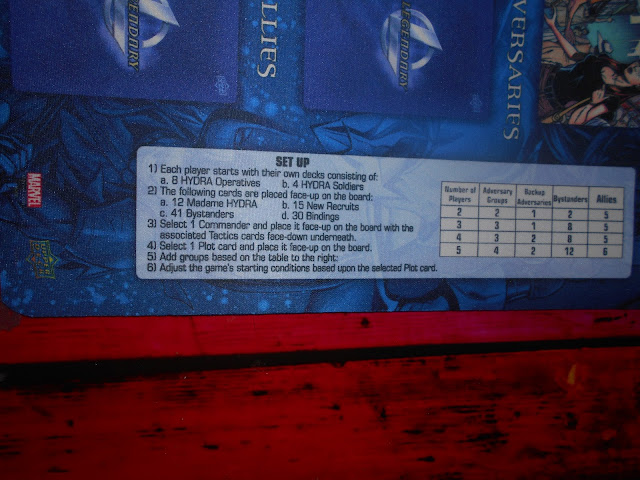 Its not just taking down the Commander, you have to watch out  Adversaries such as the X-Men and Avengers as they move their way towards your lair. so you best make sure you dedicate time and resources to fending them off, starting off at the bridge and working their way through the locations to get to your lair You can then allocate attacks to take them out and keep your base free of invasion.

At the start of the game, every player starts with the same base hand of Hydra cards, that during your turn, you will use to recruit.  Villains like, Magneto, Loki, Venom and more from. As your hand gets stronger, you’ll be better equipped to take down Commanders and Adversaries as they start heading towards your lair, there is always something going on you need to keep an eye on, so you need to make sure you are on top of things. 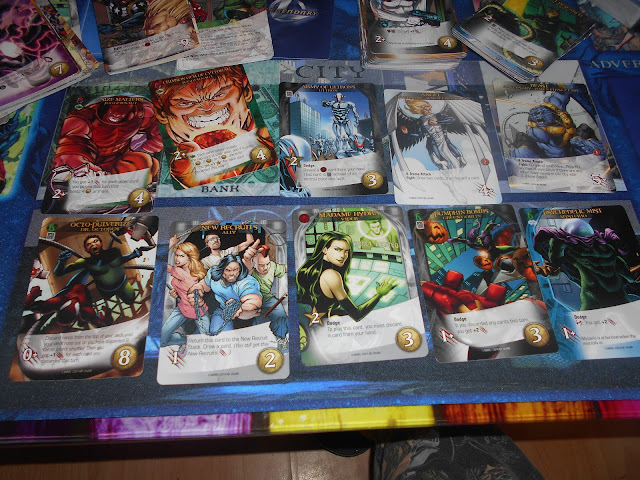 There are so many cards, here are just a few examples, the art is excellent, and the quality of the cards is high, there are hours of fun to be had just looking at the images, let alone working out stategies to take down the commander. 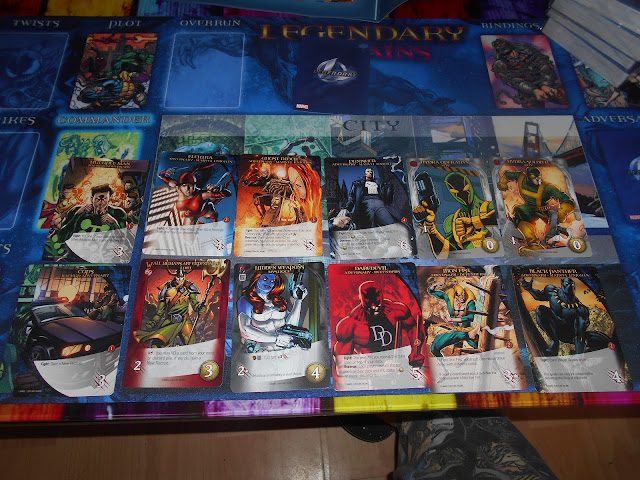 Daredevil looks excellent, art wise, as does punisher, there are so many cards in the set you will have a great time looking through them, though it will take quite some time to sort them all out
The game is a little text heavy and complicated for Olivia, so i didn't get to game with her this time, but as its solo play I played whilst she sat in and watched me, so given time there may be hope.

Overall its good fun to play cooperatively, as there is a little twist of yes you are working together, but you are still a villain, so you are still going for the highest point total yourself as well, though you do not want  to disrupt your team as you still need to "win" to win.  One of the things I really like is that it can be played solo, and that always gains points for me, solo its fun, and still a challenge.

The only downpoints of the game, are there are so many cards, sorting them out for setup and take down can take some time, but once you have got them all organized and divided up with the provided dividers in the box it should mitigate this.

The game overall gives a really good feeling of trying to defeat an overall enemy whilst recruiting your team of villains to take them down, its fun to play, with stunning artwork, and high quality cards.  Sometimes its good to be bad.


With an RRP of 49.99, it may seem hefty, but consider you are getting a high quality playmat and 550 cards!! plus of course all the storage solutions you need built into the box.  Find your local game store,  and join the fight to bring the bad back.