Continuing our look at Calliope Games Titan range after looking at Menu Masters,  today we look at Hive Mind, from Richard Garfield.  You may know him as the creator of Magic the Gathering, and King of Tokyo among others, so I'm expecting something pretty darned good! 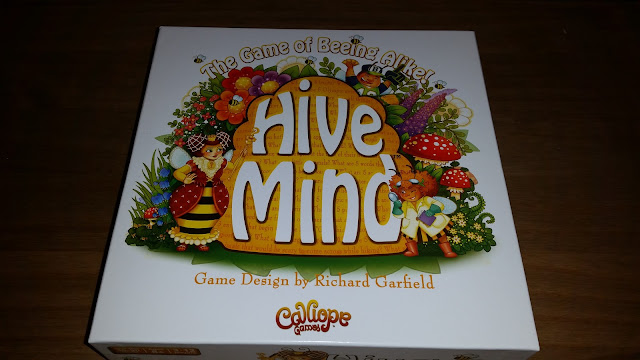 It keeps the theme, coming in a nice sized box that wont take up half your shelf! so is good for storage.
Up in a hive in that tree over yonder,
The Queen Bee has a decision to ponder.
Winter is coming, and the hive is congested
To decide who can stay, all bees will be tested!
The Queen shall ask questions, and then she will see
Which of her bees answer most identically.
Those who match answers, with thinking aligned
Will prove they can stay within the Hive Mind 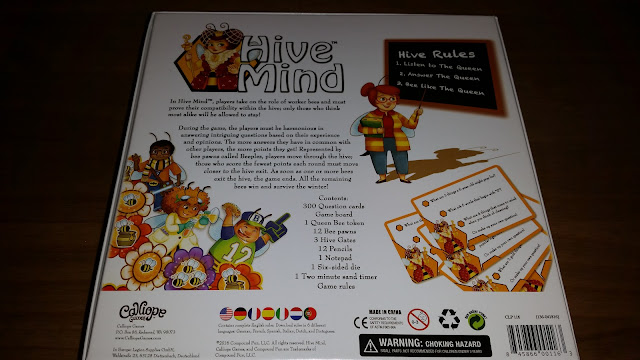 In Hive Mind™, players are bees who take turns rolling the die, moving the Queen Bee along the garden track, and asking and answering questions to assess their compatibility with the hive.
Each bee is trying to prove they should stay in the hive by thinking in harmony with the other bees. They do this by answering questions the same way as their fellow bees. The more answers they have in common with other players, the more points they get! Bees with the lowest point totals move closer to the hive door. When one or more bees leave the hive, the game is over. The bees remaining in the hive win! 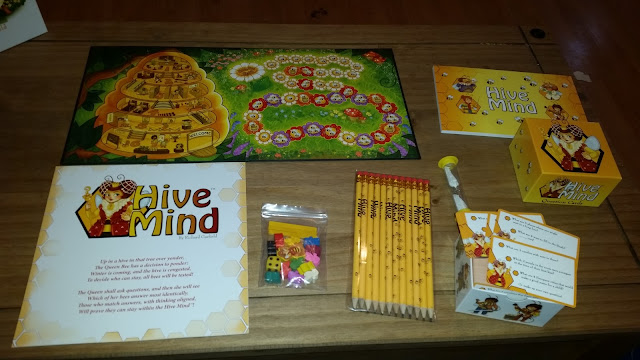 you get a rather nice colourful board, a very simple and easy to understand rulebook, some wooden meeples, a timer, pencils, a pad, and a box of cards with questions on. 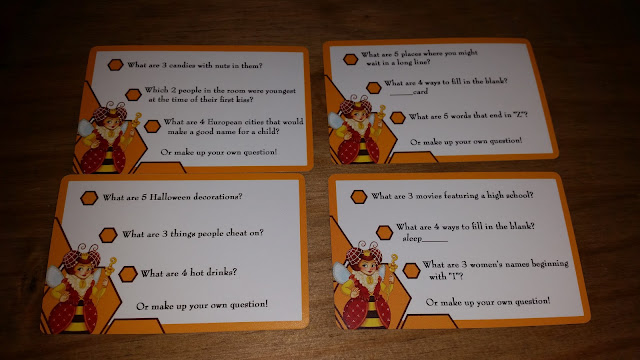 One player draws a card from the box and asks one of the questions on it, Except, instead of one person answering it, everyone does; the questions have multiple answers; and your goal is to choose answers that other people will also choose, whether or not they’re factually correct, the issue is... and the fun of it, they are trying to guess what you think at the same time, so you can often second guess each other. Whoever scores lowest in a round is moved closest to the exit. When one bee is forced out of the hive--for not thinking enough like everyone else--that bee loses and everyone left in the hive wins.

Hive Mind contains the essence of a party game: it’s relaxed, entertaining, and prone to teaching you something about your friends that may surprise you!!  There’s a slight strategic element, if you’re the active player and you find a question where you think you have the best chance of matching other people’s answers, but even then the core goal remains the same--come up with enough answers (occasionally harder than it seems) and figure out which ones are most likely to match the other players. 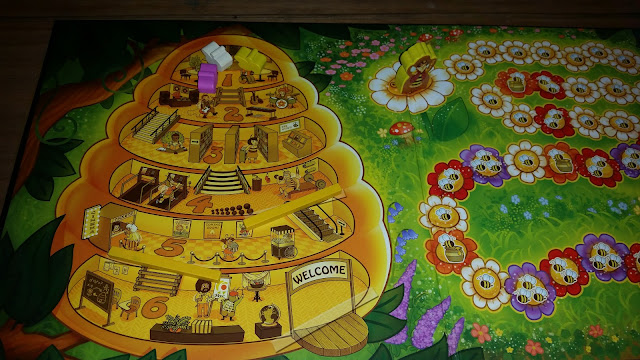 You set up the queen at the start, and all the players bee at the top level of the hive, then each turn you advance her, and the numbers of bees below are the number of ones that will drop a level if wrong, so the two lowest scorers, 3 lowest etc.  As soon as a bee is eliminated, the other players win!

Its a surprisingly fun little game, though not really for the younger players, which is odd as its theme fits theme, but the way of answering questions may not... it confused Olivia a bit thinking about how I would answer, but I would say ages 10 or 11 and up should be fine, and surprisingly very fun with adults too, so certainly a win in the Titan series!

I am not so sure on this one, trying to think of the questions with the timer, and ones that would match the other players could be hard for me, as I do not know all the questions, but when I am older it should be ok.

If you think its for you, head on over to your local game store and ask them to get it in for you.