As we carry on our Star Wars week we are looking at an expansion for Star Wars Imperial Assault from Fantasy Flight Games.  Now we are looking at one of the figure packs.  This model pack will replace the card token from the Jabbas Palace expansion, and add more to your game too.  Today we are looking at the Alliance Rangers.  They can appear to help you out in the campaign mode, and certainly will provide some solid troops for skirmish mode. 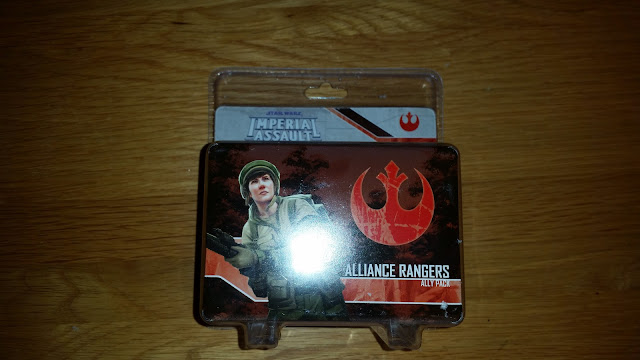 “Disguised as a cargo ship and using a secret Imperial code, a strike team will land on the moon and deactivate the shield generator.”
–General Crix Madine, Star Wars: Return of the Jedi

A successful military force needs specialized soldiers of all stripes to support the main vanguard. It needs shock troops to break the enemy lines and push an advantage, heavy artillery to bombard the enemy position, and skirmishers to harry and distract. The Rebel Alliance is no stranger to the realities of war, and there are few warriors more specialized and deadly than the Alliance Rangers.
Well known for accompanying Han Solo to Endor as part of his elite strike team with a mission to deactivate the shield generator, the Alliance Rangers are the consummate long-range fighters. Now, with the Alliance Rangers Ally Pack for Imperial Assault, you’ll find three carefully sculpted Alliance Ranger figures, new Deployment cards and Command cards, and new missions for the campaign and skirmish game, inviting you to wage guerrilla warfare in the Star Wars galaxy. 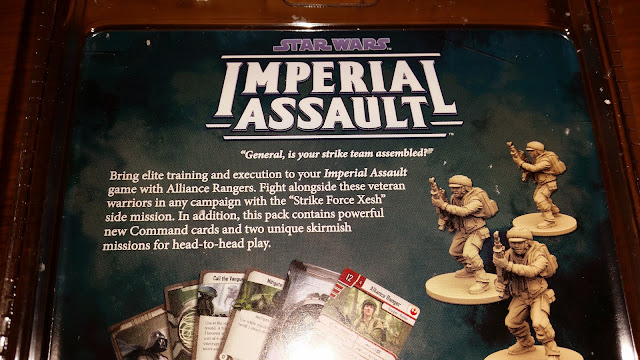 SO lets pop it open and take a look what's inside.... 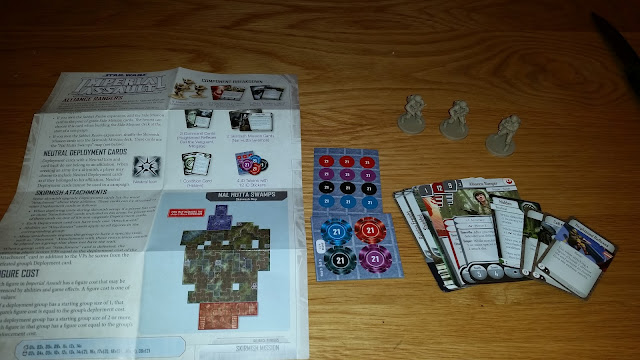 We get the usual goodies, 3 models this time... cards, a sheet with Skirmish maps on it, some stickers for telling your troop groups apart, and corresponding tokens for their cards too. 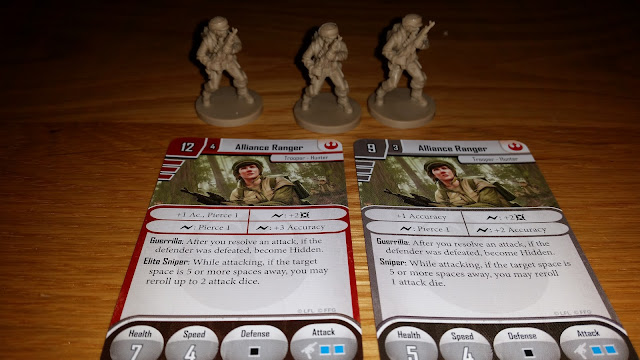 The Alliance raider comes in regular or veteran versions, that have a difference in health  and some ability's, but for their points both are solid options, I think for one point more I would go Vet, with the extra pierce, and improved surge, with Elite sniper too that lets me reroll 2 dice if their target is 5 or more squares away its well worth it. 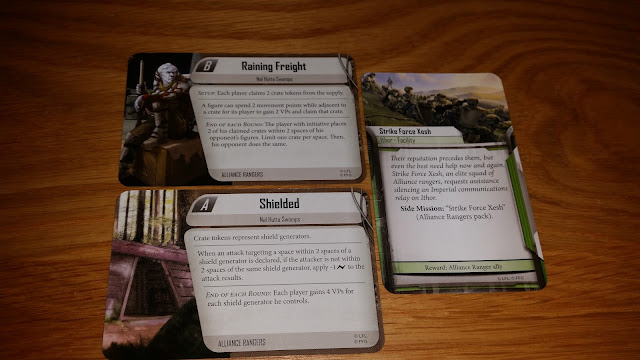 They come with their own side mission Strike force Xesh.  I really like the fact that the side missions include story text as well, so its always advancing your gaming, and in an RPG like this its really important. You get Survivalist as a skirmish upgrade that lets you ignore move penalties for terrain, and if you are outside you can heal a wound a turn, rally handy!.  You also get the Hidden condition card, its a reminder of the ability.  If you go into hiding, and these rangers are especially good at it, they become much harder to hit, and their first attack from hiding does more damage, but it removes the hidden ability, so represents them moving unseen nd ambushing, but of course you then know where they are.

for the skirmish command decks we get Heightened reflexes which lets you remove an enemy dice from their defence results, this can be hugely powerful letting you cause maximum damage.  Combine it with mitigate, which lets you reroll a die when attacking and you are bringing plenty of hurt to your foe.  Lastly Call the Vanguard lets you interrupt to perform a track, but only if the troops are cost 4 or higher, so perfect for the elite rangers.

Once more a great pack, I love all the abilities this set brings, the way they work, sneaky ambush troops that melt into and out of cover, it really fits the theme!

The pack comes with an RRP of £13.99 so head on over to your local game store and grab yourself a pack and improve your Imperial Assault game experience.