The forces of the First order/Empire get a new large base ship in the latest wave of Xwing releases with the mighty Upsilon Class Shuttle.  But... its a shuttle, a shuttle cant be that exciting right? well lets see!

"The First Order rose from the dark side."
–Lor San Tekka

The anger, fear, and aggression of the dark side find a new home in the Upsilon class Shuttle expansion pack.

Frequently used to transport dignitaries and high-ranking officers, the First Order's Upsilon-class command shuttles were loaded with defensive systems to safeguard their passengers. Advanced sensor suites in their upper wings allowed crews to scan enemy communications and help pilots avoid hostile encounters.
Even in combat, these shuttles still afforded their passengers reasonable measures of safety in the form of their protective durasteel armor and powerful shield projectors. Their twin heavy laser cannons also packed a considerable punch, but the ships' greatest defense against enemy fighters was typically the detachment of TIE/fo fighters that accompanied the shuttle. 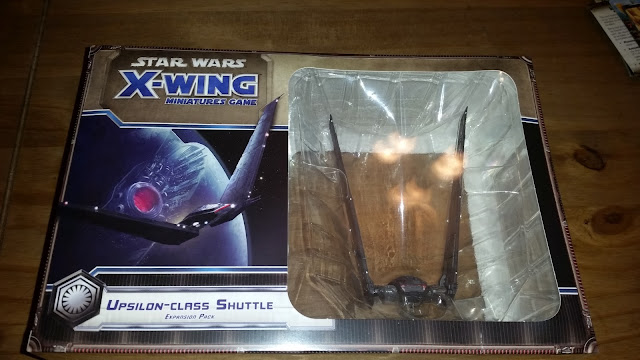 It features one pre-painted, large-base miniature of the sleek, predatory shuttle that the First Order typically used to escort its high-ranking officers. Boasting both powerful weapons and shields, the shuttle also comes with a full complement of fifteen upgrades. These include advanced new technologies as well as the dark side warrior Kylo Ren, who allows you to hinder your foes with his associated condition, I’ll Show You the Dark Side.

So lets pop the box open and take a look! 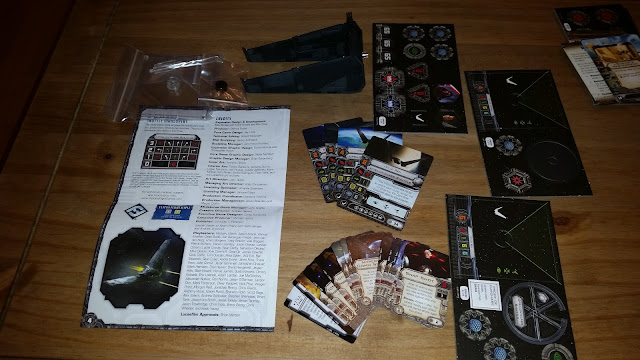 As always, all the tokens you need, and everything else for the ship! she's not quick topping out at speed 3, but does have a red hold position move to surprise your opponents.  It also comes with a mission, I wish all the ships came with missions it would make the game so much more fun but at least you know the bigger boxes do come with them. 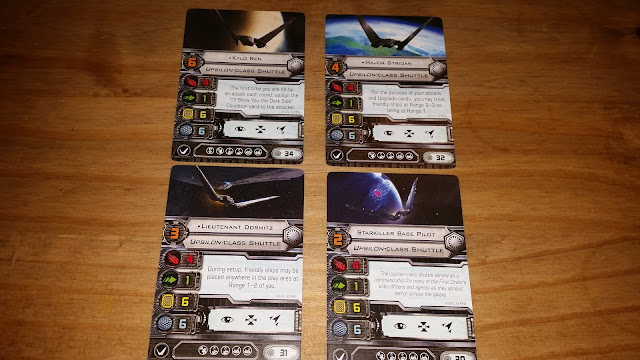 The ship stats are respectable! 4 firepower, only 1 agility, but its a big ship! 6 hull and 6 shields, so she can take a beating.  The ship also comes with a new action... coordinate.  This allows another ship at range1-2 to take a free action, which is best used when you aren't in a position to benefit yourself, or to really surprise an enemy with a volley of missiles or torpedoes with target lock and focus.

Kylo Ren comes in at skill 6 which is fine, as i never really thought of him as a good pilot like Vader for example.

His ability is passive, and activates after the first time you are hit each round.  You then apply the Ill show you the dark side condition card to the attacker.  We will get to look at this later...

Major Stridan manipulates ranges, as any action or upgrades you have let you treat ships as range 2-3 instead of 1, letting you extend your range.

Lieutenant Dormitz increases your setup range, as when he is deployed allows you to deploy your ships at range 1-2 of him. so potentially getting closer to your enemy and out of your deployment zone.

Lastly we have a generic skill 2 Star killer base pilot to round out the choices. 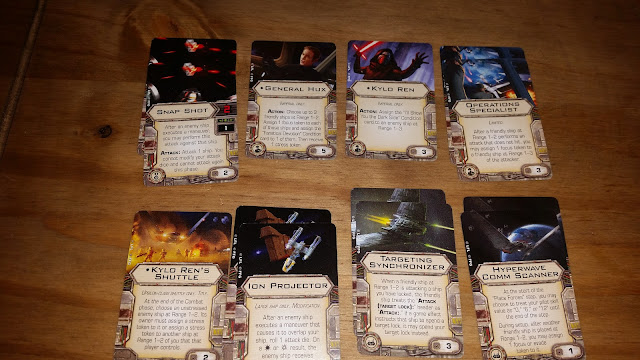 You do get a bucket load of upgrades in the pack too, and multiple copies of some as well.  Some are new, others are ones we have seen before.......

Snap shot lets you attack after an enemy ship has completed its manoeuvre, though at the cost of not being able to attack again that turn, you can not adjust your dice, and it only has a 2 attack.

General Hux is an imperial only crew upgrade.  He has an action which will cost you a stress, but it does a lot! You pick up to 3 friendly ships at range 1-3 and assign each a focus token, and one the Fanatical Devotion condition (we will come to that soon)

Kylo Ren comes as a crew member that as an Acton lets you assign the I`ll show you the dark side condition.

Operations specialist is a limited (you can only have 1 in your fleet) crew.  After a friendly ship at range 1-2 attacks and misses you may assign a focus token to another ship at range 1-3 of the attacker.  Its another good way to spread out the support.

Kylo Rens Shuttle is a title for the Upsilon class shuttle only.  At the end of the combat phase you can choose an unstresseed enemy at range 1-2 that must then take a stress on it, or another ship that is friendly to it at range 1-2 of it.

Ion projector is a large ship only modification.  After an enemy ship overlaps you roll a die, on a hit or critical it takes an ion token.

Targeting synchronizer helps out ships at range 1-2 of you by letting them use your target lock, again handy if you are not in arc, or for a surprise missile/torpedo volley

The Hyperwave com scanner comes into platy at the place forces step, so before the game begins.... you can decide to have your ship count as pilot skill 0, 6 or 12 until the end of the phase, and when you place another friendly ship at range 1-2 you may give it a focus or evade token.  Very useful for delaying setup to see where  the enemy big hitters go if you choose 12, or if you choose 0 and gather everyone around you can give them all actions. 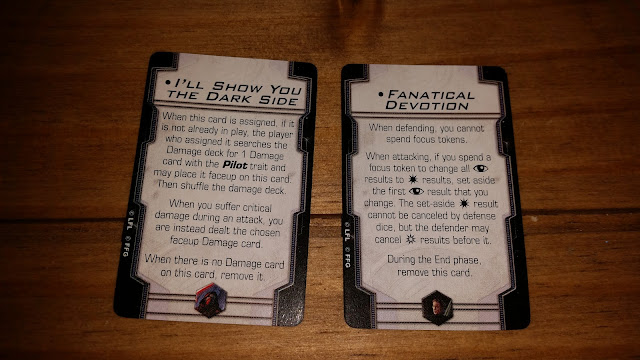 You get the two condition cards with matching tokens too.....

Ill show you the dark side.... When you assign it you can search the damage deck for a 1 damage pilot traited card, and place it face up on the card.  When you suffer critical damage you are instead dealt the face up damage card, and the condition is discarded when there is no damage card on it.  It's a good way to cripple your enemy, and some pilot trait cards are brutal.

Fanatical Devotion is a good boost for your own ships, though you can not spend a focus token whilst defending, but whilst attacking... that's where you get the bonus!  If you spend a focus whilst attacking to change all focus symbols to hits, you can set aside the first focus you changed to a hit, can not be cancelled by defense dice, and its removed by the end of the phase. 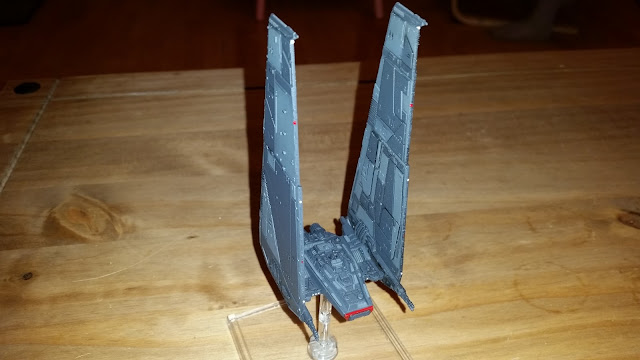 The ship itself looks great, its huge and highly detailed. 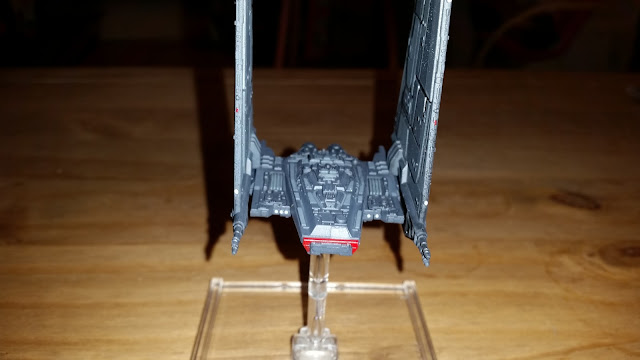 Its not very colourful, but then it matches the appearance of it in film. 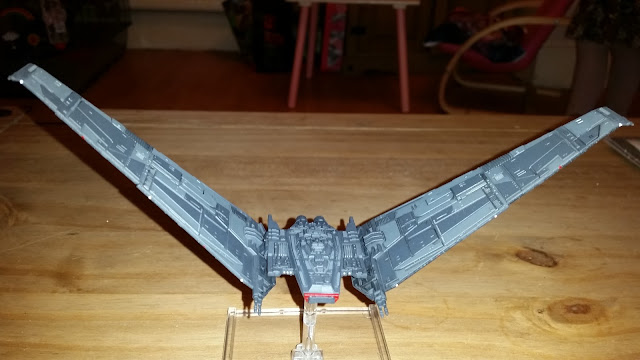 It does have cool swing wings, again as seen in the film that move nice and easily. 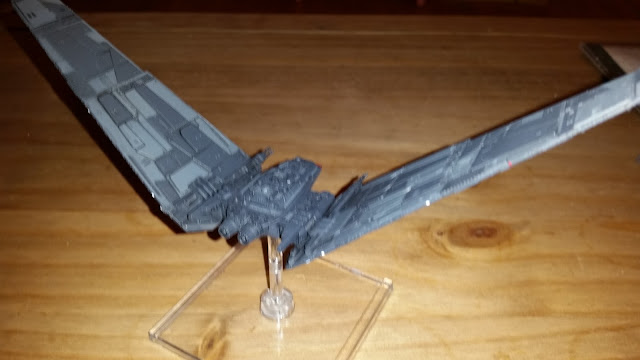 Its a cool ship, and a very good one too, it hits hard, and can be turned into a great support ship as well as a centerpiece of your fleet.


With an RRP of £36.99 you get a ship that packs a real punch and introduces some new things to try with Kylo`s force powers, along with a good fun mission, so head on over to your local game store and grab yourself a pack.