Continuing our look at the latest wave of Xwing ships we have Sabines TIE for the Rebels, yes its a Rebel TIE fighter!

"Yeah… about that, uh… we stole a TIE fighter."
–Ezra Bridger

There is no starfighter more closely associated with the Galactic Empire than the TIE fighter. Designed by Sienar Fleet Systems, the TIE fighter was cheap, mass-produced, and ubiquitous—a quick and agile dogfighter deployed most often in overwhelming numbers. Squadrons of TIEs would serve as reminders of Imperial might. Even solitary TIEs could spread fear among those who heard the distinctive roar of their twin ion engines racing overhead.
Accordingly, there's no small measure of irony in the fact that the Rebellion will soon get to field its own TIE fighter in battle.

But this TIE fighter doesn't represent Imperial might. It was stolen and modified. It was painted bright orange and yellow. It represents individuality and defiance. 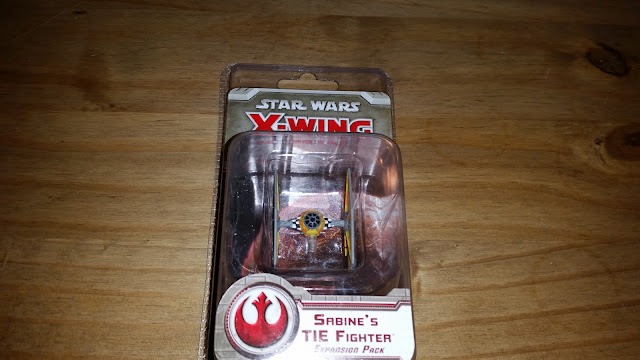 The stolen TIE fighter's locator beacon might have been dismantled a bit later than it should have been, but it was eventually dismantled. Then Sabine repainted the TIE, working her masterpiece in bright shades of orange and yellow between the black and grey of its wings and their solar collectors. Those, however, were not all the changes the Rebels made.
They modified the ship enough that they were able to squeeze a couple of passengers into the cockpit, alongside the pilot, and then—in a dramatic turn of events—outfitted it with enough illicit EMP devices to temporarily shut down nearly all of a Star Destroyer's systems from inside its docking bay.

so lets pop it open, and take a look inside! 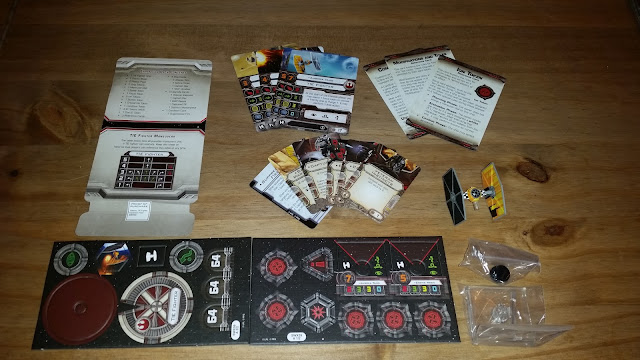 As always with FFG, all the goodies you need are in the pack all the tokens, reference cards etc.  Move wise, she handles just like a regular TIE Fighter as you would expect, and that ship is certainly no slouch in the move department, so expect a very fast and nimble ship for the rebels to use. 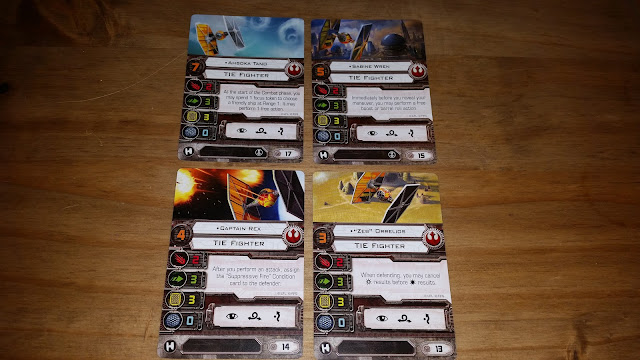 Pilot Wise we get at skill 7, Ahsoka Tand who lets you spend a focus to let a friendly ship perform a  free action.  this can be very handy if you another ship set up that has firing arc whilst you do not, or is swinging with a better attack value.

Sabine Wren lets you  perform a  free boost or barrel roll action before you reveal your move dial, which is great for extra agility, and the fact the TIE does not have a boost natively means she's super Fast

Lastly we have Zeb Orrelios who lets you cancel a crit before a hit when defending, which is super useful with such a fragile ship. Sabines masterpiece, which gives you a  crew and an illicit slot on your bar, very handy as it allows some more gadgets for the Rebels to use.

Captured TIE is a modification, and enemy pilots with a lower skill than yours can not attack you until you attack (blowing your cover) or are the only ship left (it takes a while for the imperial pilots to figure things out it seems)

Instead of attacking you can use the EMP Device to assign 2 ION tokens to each ship at range 1, which can cause havoc if you have support fighters ready to swoop in to the mix.

Captain Rex appears in crew form too, and lets you assign a focus token to your ship after you perform an attack that does not hit.

Then we see a classic card, Veteran instincts, that increases your pilot skill by 2, always good.

lastly we have the reference card fro suppressive fire... now that when used by Rex forces its target to reduce its firepower.  So the enemy when attacking any other ship other than captain Rex rolls 1 fewer dice, but if you declare a target targeting rex, or he is destroyed this is removed.  If Rex did not attack this phase remove this card, so you really need to keep pummeling something, great against bigger targets you can dodge  and weave to keep attacking. 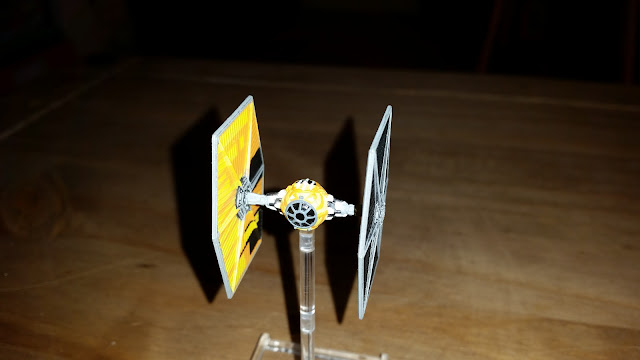 The ship itself is a classic TIE model, with the grey wings, but the inner wing panels and cockpit have been repainted to match Sabines creation, it looks really good in person, is eye-catching and cool looking. 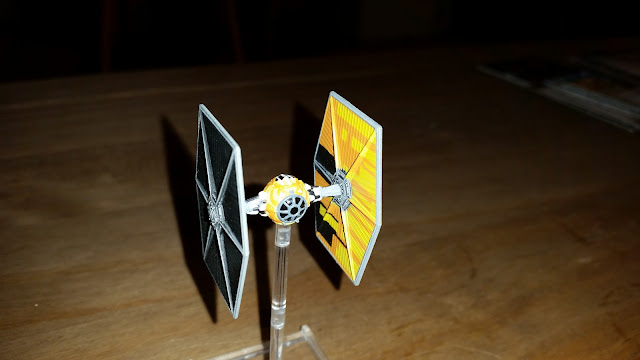 Its going to be really fun to fly this ship, with the captured TIE ability its almost a challenge to sneak up amongst them and put some ION tokens on them, as that's not an attack they wont be able to target you!

With an RRP of £13.99 you get the chance to fly the infamous TIE for the Rebels and a very cool looking one too! so head on over to your local game store and grab yourself a pack.