Time to drift back in time to those golden days of the 80s with the theme of today game.  Big Trouble in Little China was one of my favourite films of the era, full of action, fun and mystery i loved it then, and to me anyway its still stood the test of time, and is a great nostalgia trip to those simpler days when my main concerns where doing my homework, or what game i was wait to load on Amstrad CPC 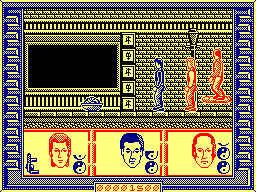 Back then there was a Big Trouble in Little China video game.  Yes... it looked horrible, and im not sure i recall it being any good at all, but it was all there was to live in the universe back then.  There has in fact not been any other games on it since then. Until now that is.  Upper Deck have come out with Legendary Big Trouble in Little China, and I get a chance all these years later to dive back into the world as a player rather then a viewer.  I love to still watch the film, and enjoy it every time, even though i think i have seen it more times then i can count.  This game will really hit the nostalgia button, IF..... if its done right. So lets see if it accomplishes that..... 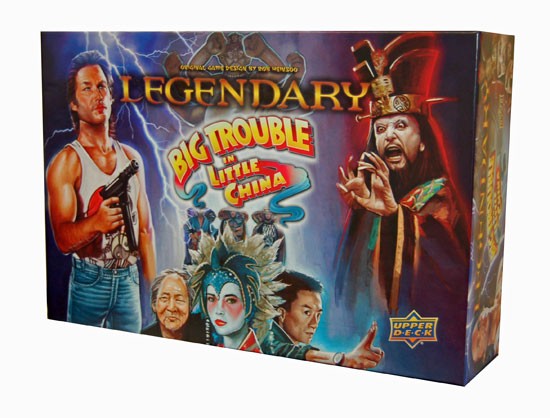 In Legendary players choose a number of hero heroes and then face off against one particular villain, his band of evil minions and their latest scheme for World domination. The heroes use their own skills to wipe out each of the villain's strategies that would complete his scheme and recruit additional fighters as the game progresses. However the villain also gains extra powers and fighter along the way and the heroes will need to have stopped enough of the enemy's plan before it’s too late.
Now you can play the Legendary card building game all based around one of the best pulp action stories Big Trouble in Little China. This set will provide all the cards, rules and other essentials to play through every mission in the game and have hours of fun.

Can Truck driver Jack Burton and his friends save the day or will they be defeated by the Three Storms and allow Lo Pan to be rise anew?

This is a stand alone set, so doe not need any of the Legendary games, though it is worth taking a look at the Marvel Legendary villians set to get an idea on how to play the game, as the basics are the same.

But this is not a world of spandex wearing superheros... but a world of myths legends, and a lost truck driver.! 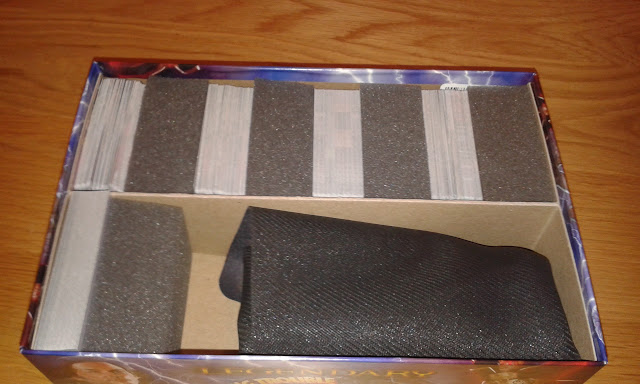 My one issue with the box is its shorter then the standard ones, so you have to roll AND fold the mat, which is not an ideal way to store it in my mind, but its not too much of a worry, you can always store it separate to avoid creases. 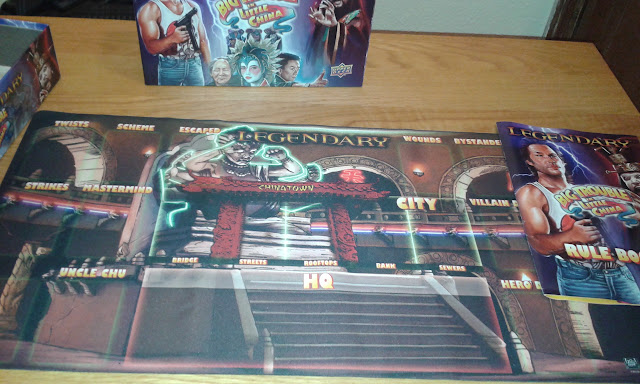 Speaking of the mat..... Its lovely looking, and captures the feel of the film, with the text in the right fonts, and the overall art style.  The Mats in these games are lovely, so im always happy to see them, it really makes the game rather then playing it just on the table.  Great looking art..... 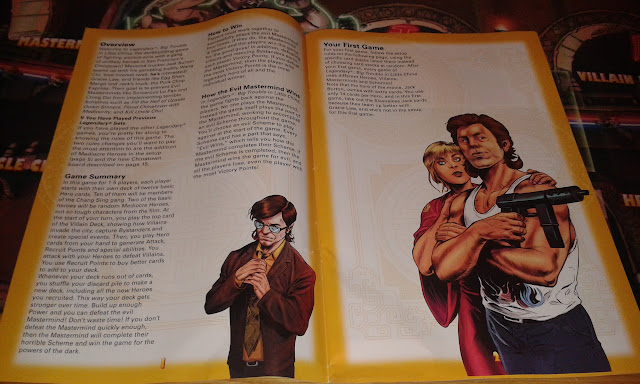 The Rulebook is concise, and not that hard to learn, so you will be up playing in no time, well... i say that..... i mean after you have sorted the cards out into their relative decks which should take you around an hour or so, longer if you want to sleeve them.  But once its done the box is designed to store them easily once sorted so you will not need to do it again.  It also has some lovely art in the book, they maybe slightly off facial from the film characters, but its still well drawn, and close enough, and has enough "feel" of the film to be forgiven, as it may not be accurate, but is still at lest well drawn and consistent. 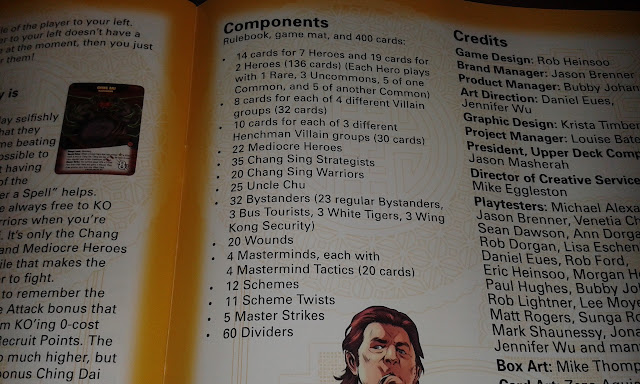 A nice handy list gives you all the components and cards you will need, so you can easily sort them out and sleeve them up and with dividers keep everything separated and ready to play. 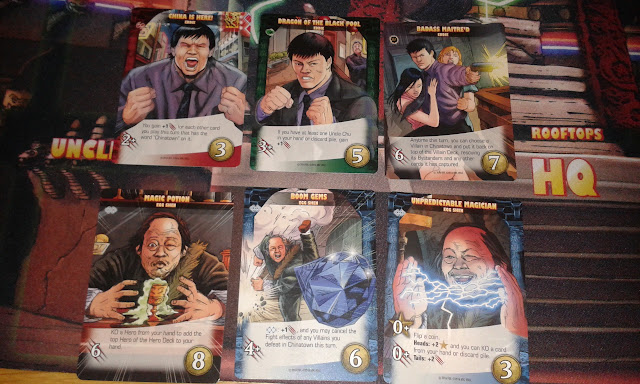 The Art very much has the flavour, theme, and fun of the film in it with some of the character cards, like the different versions of Eddie, and Egg Shen 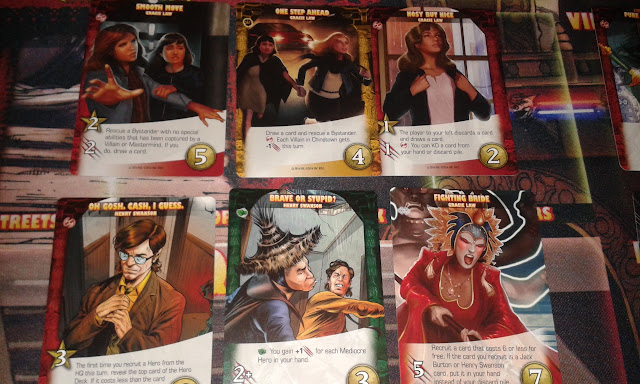 Graces art is probably the furthest from character, except for fighting bride, thats a great one, but you can plenty of variety, and its all full of quotes from the film which you know well will give you endless pleasure. 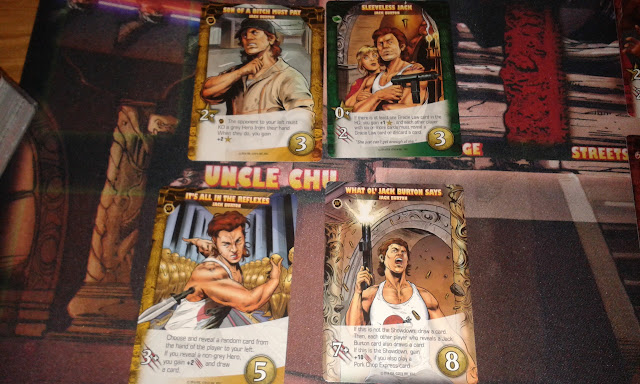 Jack comes in several differnt variants including minor and major hero versions, so you will have plenty of options, and you can see he can get pretty darn powerful, but then he is a hero, so its only right, though of course in the film a lot of his heroism is accidental, but never mind that! 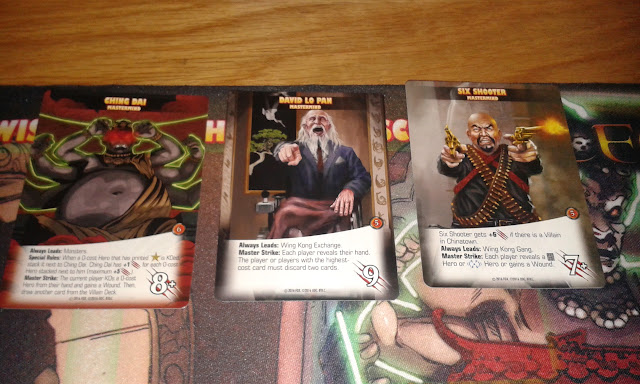 For Evil Masterminds we Have Ching Dai the mighty Glowing Statue, Lo Pan of course! who is very very nasty, and Six Shooter for a more gentle introduction into the game.  The rules do advise on who to try in a starter game and give you the decks for it so you can get used to the system, and get on with having fun without having to worry too much. 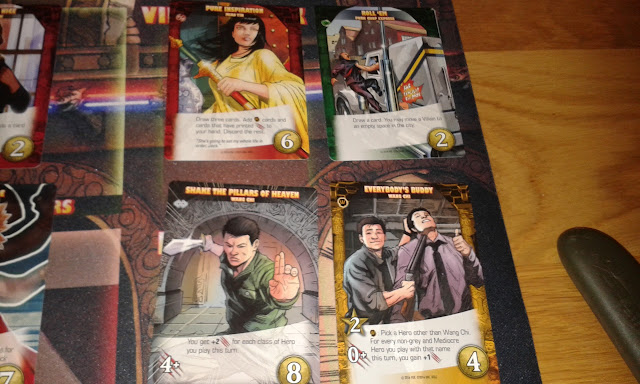 all the other main characters from the fil are here as well, with Mei Ling, Wang, and even the Pork Chop Truck, there to help you take down the mastermind and defeat evil bringing peace back to San Fransisco 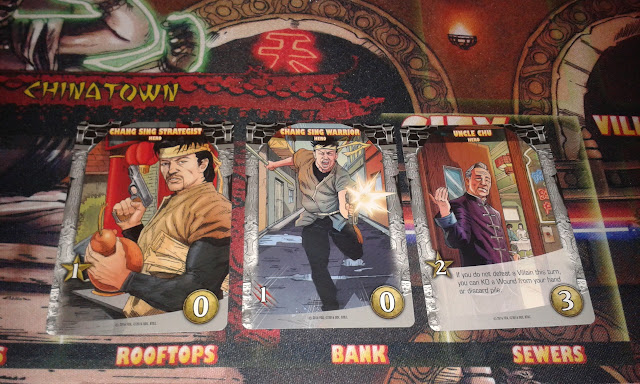 Chang Sing Warriors and strategists provide your basic starting deck, with Uncle Chu able to give you a boost to your recruiting power, and help with healing as well. 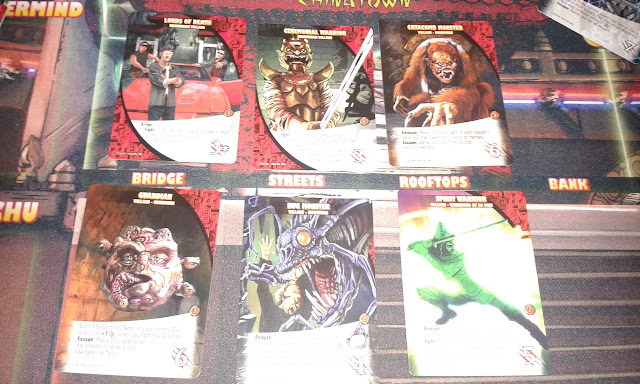 Of Course, our heroes need suitable villains to fight against, as they work their way through the locations on the mat, so who can we expect to see? well here is a sampling of a few, the Lords of Death, with those iconic yet sadly impractical shades from the movie, pure 80s there! the Guardian, various beasts from the underworld and plenty more too. 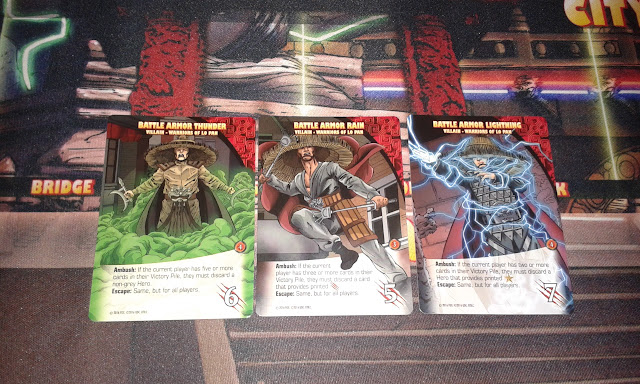 Of course it wouldnt be complete without having to face the 3 storms, who come in their armour and their corporate versions, and these guys are tough!! when they come into play you need to make sure you take them down ASAP or they will start causing havoc, plus they look amazing! just like the film, very pleased with them as they where massive characters. 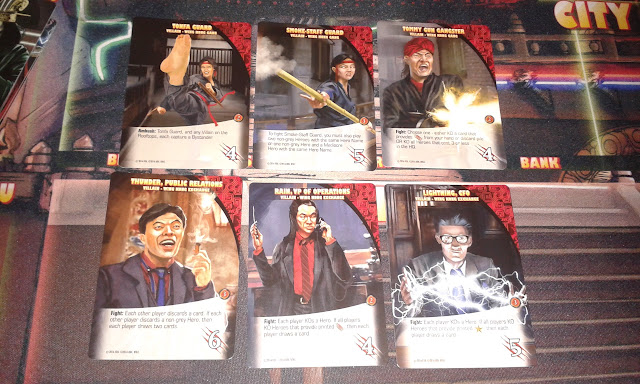 Of course there are "easier" generic baddies to deal with, but again all of them from the film, and easily recognizable, and they aren't even that easy if i am honest.  The game is tough, but it should be, so it feels "right" and is very rewarding.

So What do i think? well the game flows well, as all the legendary systems do, this one is not so suitable to solo play though sadly due to some cards requiring multi player input, though you still could, you would just have to manage a couple of hands.  Theme wise and art wise, its a win for me, Love how it looks, love how it plays, its a cracker, there is plenty of challenge for replay value, and changing the heores with different combos of masterminds will give you plenty of playing time, and its hard, so you wont beat it often but you will keep on trying.


with an RRP of £46.99 This is a great stand alone for Legendary, and a MUST have for fans of the film, so head on over to your Local Game Store and pick up a copy and join in the fun!