As we carry on our Star Wars week we are looking at an expansion for Star Wars Imperial Assault from Fantasy Flight Games.  Now we are looking at one of the figure packs. This model pack will replace the card token from the Jabbas Palace expansion, and add more to your game too.  Today we are looking at Captain Terro.  He makes a "few" appearances in the campaign, so its going to be great being able to replace his token with a model, and he also doubles up as a generic Dewback rider. 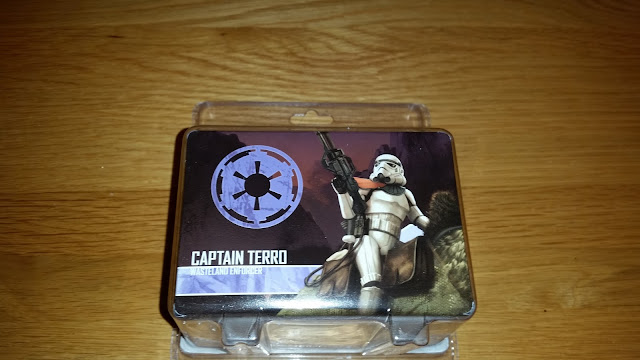 The regional governors now have direct control over their territories. Fear will keep the local systems in line.”
–Grand Moff Tarkin, Star Wars: A New Hope

Imperial forces on Tatooine may not have the same sway as Jabba’s gangsters, but they can still be dangerous and violent—especially if their authority is not respected. Several Stormtroopers have adopted the native dewback as a mount and organized a cavalry division under the command of the vicious Captain Terro. A Stormtrooper mounted on a powerful creature like the dewback is not to be underestimated, and the Galactic Empire gains a new tool in its arsenal with the Captain Terro Villain Pack.


The heroes may come into contact with Captain Terro himself or just a Dewback Rider from his command, but either one would be a dangerous opponent. The dewback mount gives these warriors a prodigious amount of movement, and by striking from the creature’s back with shock lances or flamethrowers, a single Stormtrooper can cause a massive amount of carnage or split a hero party in two. With a new three-card Agenda set that challenges the heroes to stop a Stormtrooper reprisal against Anchorhead, a new skirmish upgrade, and new Command cards for your skirmish games, this Villain Pack offers a powerful new weapon to every Imperial commander. 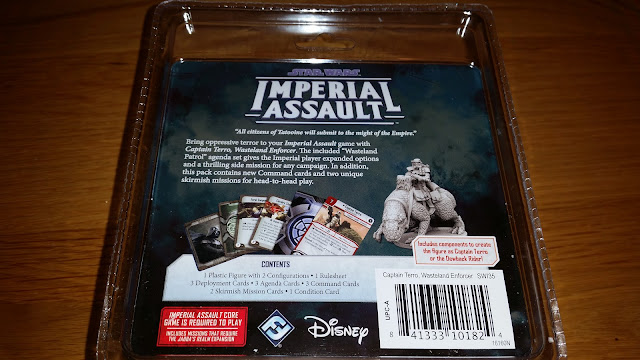 Lets pop open the pack, and take a look inside to see what we get! 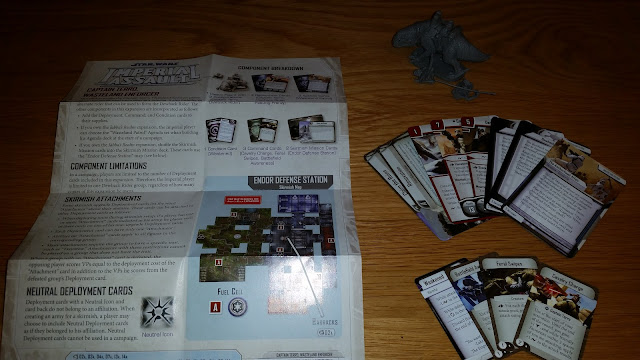 We get the usual goodies, a big mount model, with two options for torsos, one for Terro, and one for a generic Dewback rider.  Since they just slot together its easy to switch them in and out as need be. models this time... cards, a sheet with Skirmish maps on it, some stickers for telling your troop groups apart, and corresponding tokens for their cards too. 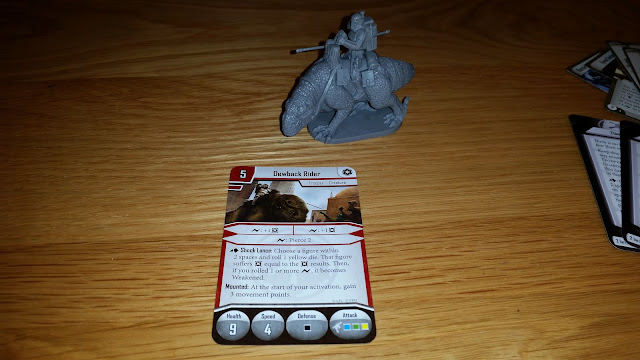 The Dewback rider isn't cheap, but he's good, hits with some good firepower, can move fast by being mounted which gains 3 movement points at the start of the turn for a total of 7.  Surges can cause more damage and pierce too.  Shock lance though is a nasty surprise, as you can pick a character in 2 spaces and roll a dice and they suffer as much damage as you roll.  Nasty surprise before hitting them with combat too. 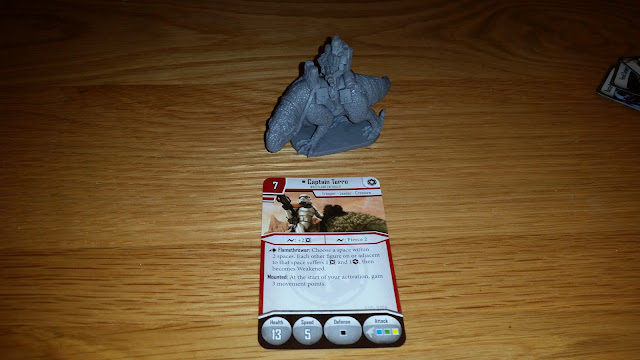 Captain Terro, as well as being an awesome looking model is a beast... 13 health, and 8 speed with his mounted rule.  Surging he can do 2 extra damage and pierce as well.  His toy instead of a shock lane is a Flame thrower.  To use it you choose a space within 2 spaces, and each figure on that space or adjacent to it take a wound, and a strain, and become weakened too.  played right you weaken them, then charge in and hammer them hard. He is certainly a fearsome opponent, fast good shooting and you don't want to be close to that flamer, but with his speed, its hard to stay away! 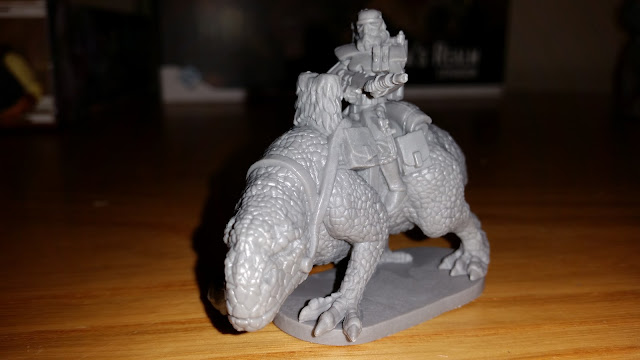 The model is awesome looking, I really like it, the more of these models is ee, the more tempted to try and paint them I become. 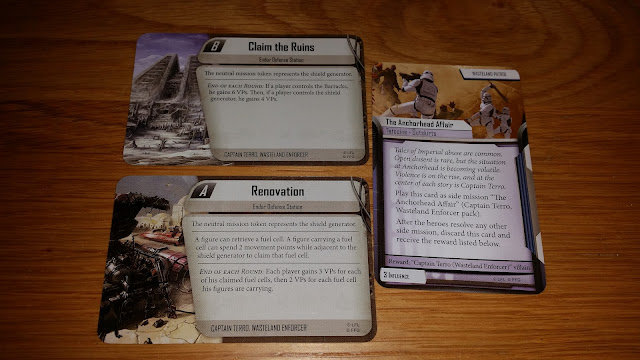 His side mission is the Anchor Head Affair, and it really suits his theme certainly from the campaign, I do not want to spoil it, but he's an entertaining character.  Claim the Ruins and Renovation provide you with the skirmish missions for this pack, with plenty more variety certainly compared with the core set, and added to that, Jabbas Realm, and the other expansion packs we have looked at this week too. 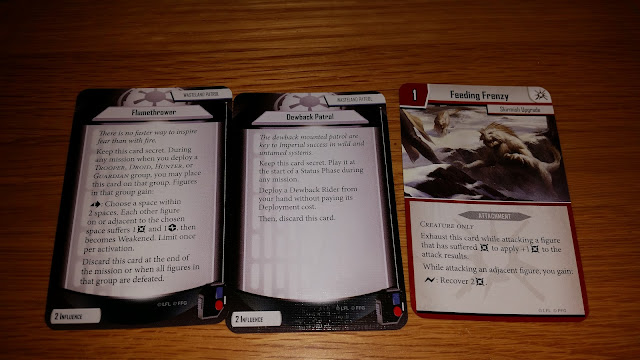 The Imperials get some new toys for their deck with Dewback patrol, and flamethrower which can provide some unpleasant surprises for the hero's in campaign mode.  Feeding frenzy is a skirmish attachment for a creature only, but you exhaust it when attached to a creature with a wound, to apply an extra wound to your attack, and if tis an adjacent figure a surge lets you recover 2 wounds, so I imagine its whilst you are munching away at a victim. 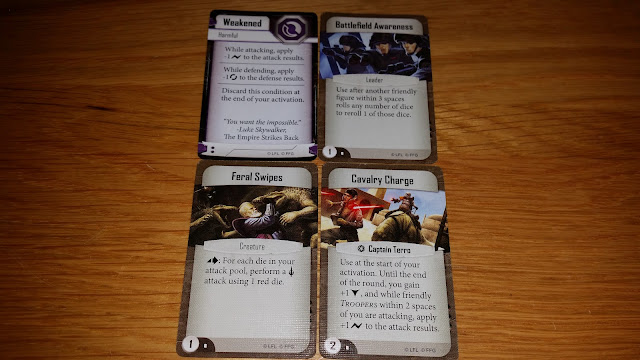 Lastly we get the weakened state reminder card, we have seen this in the core set before, but it makes the victim of it less able to attack by having minuses until its discarded.

Battlefield Awareness lets a friendly figure up to 3 spaces away reroll a die.
Feral Swipes is an action that lets you perform a melee strike using a red dice for each other dice in your attack pool, so potentially you can hit with more power.
Lastly... Cavalry Charge which is only for Captain Terro can be used at the start of your round, and until the end of it you gain an extra defence, and any troopers within 2 space get to apply an extra surge when attacking.

Another great pack, and for such an integral part of the campaign well worth getting! let alone the more missions, and of course the opions for a generic OR terro in the pack with different models, very very cool.

The pack comes with an RRP of £13.99 so head on over to your local game store and grab yourself a pack, get a cool looking dual purpose model, and some new toys to play with in Imperial Assault.