A Scoundrel's Tale: an X-Wing list and tournament battle report

Today we have something of a rarity in the form of a guest article, and hopefully a regular feature in the future.  It comes from Dave Cook, friend and fellow local gamer, so over to him......

After resisting the urge to buy into X-Wing for nearly 4 years I finally succumbed in October last year and have subsequently invested heavily in the game.

I instantly developed a love for everyone's favourite Correllian smuggler and began flying the Falcon a lot.

As I'm quite a competitive person by nature this eventually led to me heading down to Dark Star Gaming in Plymouth to join in with their X-Wing league on a Thursday night.

I have been trying out several ships to fly alongside the Falcon and eventually settled on the ARC-170 Gunship. 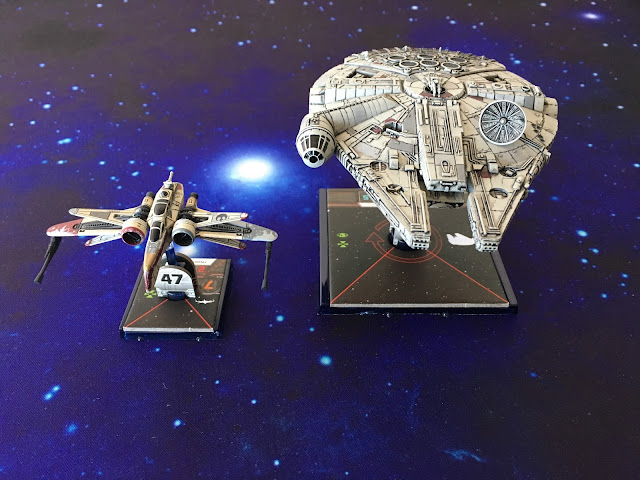 It's tough, packs a punch has a rear fire arc and a wealth of upgrade options making it an ideal partner for the Correllian Freighter.

After a few games I ended up being undefeated with the list and decided that it was maybe time to test the waters at a local tournament.

Our local games store Antics holds a monthly X-Wing event and I ended up going to their January one. My buddies Sam and Matt also came along for 3 rounds of spaceship action. There were 8 players altogether. 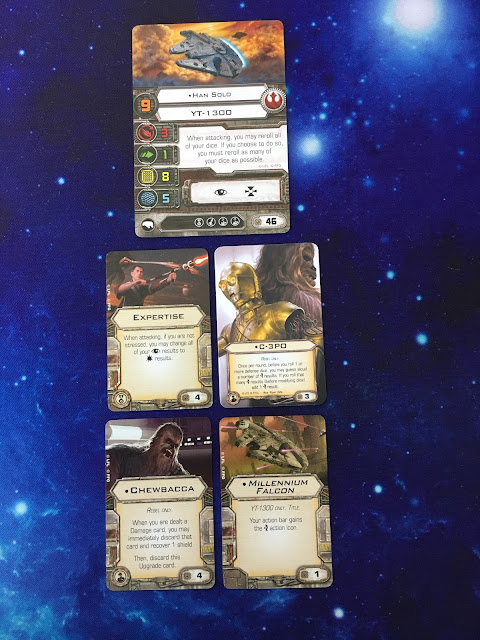 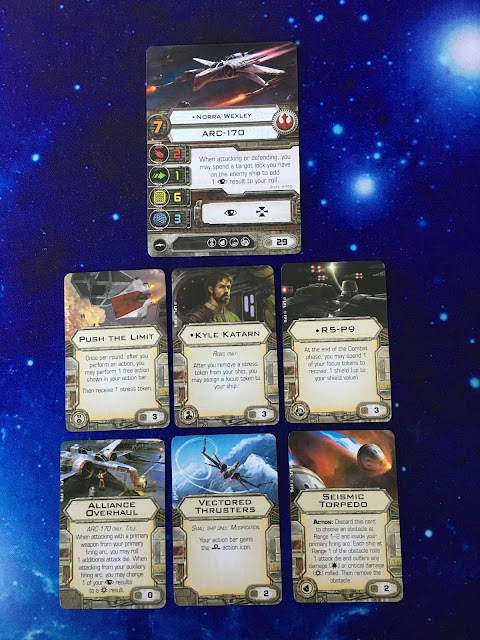 The Falcon is an absolute tank with a great maneuver dial, 360 degree field of fire and the ability to doge incoming fire with 3PO and the evade title and also take hits due to its high shield and hull rating. Expertise comes in the new U-Wing expansion and is an incredibly strong addition. It effectively gives you a free focus on the attack whilst you are not stressed allowing for Han to take an evade action most rounds. Coupled with C-3PO this enables you to dodge a lot of flak whilst still delivering a punishing volley of fire each round. Chewie is effectively a hull and shield upgrade for the cheap cost of 4 points. He also helps saves your ship from going to half damage and denies your opponent crucial victory points.

Norra Wexley seems the most durable of the ARC-170 pilots and her seemingly innocuous pilot ability is both very strong on the attack and defence. Push the Limit has been a staple Elite Talent for a while now and whilst the ARC seemingly wouldn't benefit from having it; this list really enables some crazy action economy. With Kyle Katarn you effectively gain a free focus every round when the stress is removed. This allows for a double focus action enabling R5-P9 at the end of combat to regenerate shields. You always want to target lock with Norra and be focused. Push the Limit enables this and Vectored Thrusters allows you to ARC dodge and bring your guns to bear. Seismic Torpedo can clear the path for your ships along with the occasional splash damage to the enemy. The fact it's an action to fire it provides you with nice Push the Limit synergy. Alliance Overhaul rounds out the ship providing it with an extra dice firing forwards and a shot out the back is improved also.

On to the games!

Round One: Matt With Palp Aces (Darth Vader, Carnor Jax and Omicron Shuttle with the Emperor himself on board).

I've flown against my mate Matt a few times now so had the basic gist of how his list was supposed to play.

Matt came in aggressively with Vader whilst Carnor Jax screamed down the left flank. Vader got unlucky and got lit up by my 2 ships he evaded poorly, going down to hull very quickly. The following round I managed to finish Vader off with another volley of concentrated fire.

Carnor Jax got stuck in the mix preventing Norra from using her focus and we spent the next couple of turns trading shots. Eventually I landed some significant hits blowing the Royal Guard away whilst Chewie saved me from going down to half points. Once it was down to just the Shuttle it was only a matter of time and it eventually succumbed to the accurate volleys from Han & Norra.

I deployed opposite Manaroo hoping to bring Dengar in before he got in a prime position.

Han took a few licks as we went in whilst I lit up Dengar with everything I had. Han lost his shields and Norra missed completely and things were looking grim. The only saving grace was Dengar's shields were down following accurate fire from Han. The next couple of rounds I swung away from Manaroo whilst keeping Norra's back arc on Dengar and Han circling round.

Norra got very lucky and despite Zuckuss making me re-roll my dice at range 3 I rolled the exact same result and dodged a crucial volley. I got Dengar down to one hull with 3 crits and a hit (Weapons Failure, Console Fire & Damaged Engine).

The following round Norra finally went down followed swiftly by Dengar as Han finished him off.

Once it was down to just Manaroo I kept Han at range 3 meaning I could always evade the incoming fire with 3PO & the evade token. A couple of turns later it was all over as the Correlian scoundrel blew away the Jumpmaster.

Chewie was again crucial this game along with 3PO and Norra's action economy was brilliant.

This was gonna be tough, two agile ships with Heavy Laser Cannon and Autothrusters along with Fire Control System.

I deployed opposite B whilst C was out on the far left. B ran away from both my ships and Pooley came in quick with C on my left flank. I turned to face him and managed to get off a couple of shields in the opening pass. B then came in and Han and Norra both concentrated their shots on the droid stripping his shields. Turns out Range one and Expertise is pretty solid. Norra kept arc-dodging B whilst focusing everything on him. He eventually went down and I closed in on the other IG. Chewie again saved me from going down to half damage whilst I constantly target locked and double focused Norra each turn. My dice were on fire and Expertise was punishing the droid. 3PO kept saving me 1-2 damage a turn and finally I blew away the remaining ship.

I was absolutely gob smacked, I thought my list was good but didn't expect to beat two top tier lists. Toughest match was definitely Dengaroo, but the force was with me and my rolls were really strong in round 3.

Chewie and 3PO were really good and Expertise is just stupid. It meant I could evade every turn and still deal out a lot of hits.

Seismic Torpedo was very underwhelming and I think if I were to fly this list again I would drop it in favour of a 2 point initiative bid.

I came in 1st place and won a £10 Antics voucher (aka £10 off my next ship!) and a Corran Horn alternate art card so I was well chuffed! 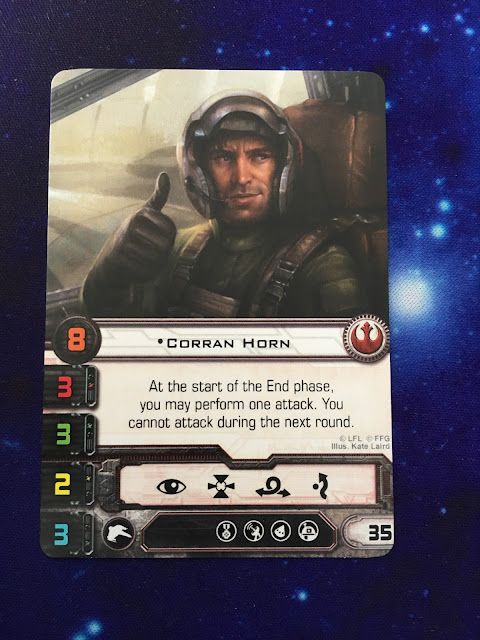 It was a great day out and to make things even better Sam came in 3rd with his Ghost/Biggs list taking on 3 much more experienced players. Watching his double tap Autoblaster Turret chew through his opponent's TIEs was brilliant.

I'm looking forward to the next one.

Stay tuned to see how my next adventure goes.

And remember, the Force will be with you, always.
Labels: Star Wars Xwing