Sherlock Holmes, is to me, a classic series of books set in Victorian London (no i do NOT like modern versions) so seeing this, with such atmospheric art has me intrigues, and the fact that its touted as a game of deduction.  It also helps that Conan-Doyle had his medical practice a few minutes from where i live too.

Watson & Holmes is a game of deduction set within the magnificent works of Arthur Conan Doyle. Two to seven aspiring detectives step into the shoes of Doctor Watson, working alongside the detective Sherlock Holmes to try to solve a series of so far unpublished cases directly extracted from Doctor John H. Watson's diaries. Those who accept the challenge relive the adventures of the crime-solving duo, visiting each of the locations where the inquiries were made. Following the trail, each clue brings players closer to solving the case. 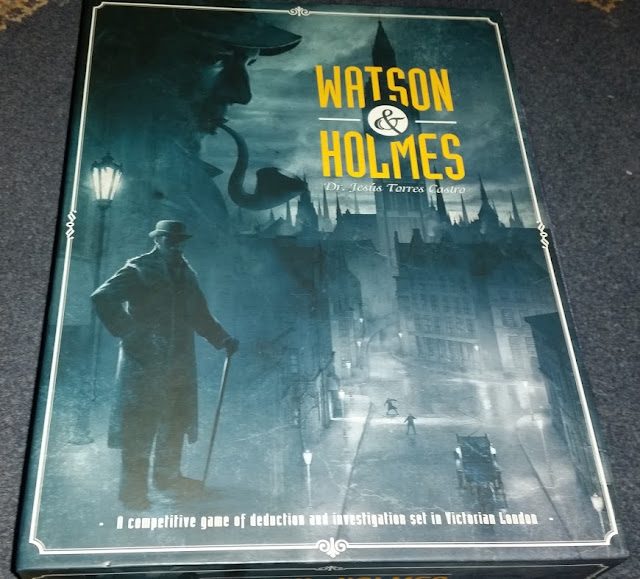 The objective of the game is to immerse yourself in the Victorian world depicted in each story. Visit the right places, decipher the clues, and above all find the path that leads you to solve the mystery before anybody else. Victory goes to the player who accurately uses the deductive reasoning so famously and ingeniously implemented by the hero of 221B Baker Street.

So whats inside? and how does it work (do not worry its spoiler free!) 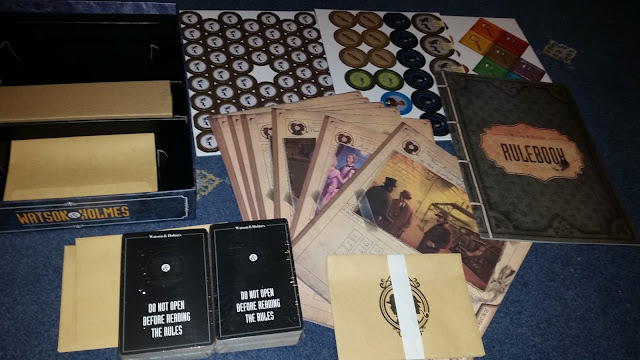 You can see you do get plenty, lots of tokens to punch out, and cards too.  These are for the cases and are numbered, with matching envelopes provided so they can be stored nicely.  Each case also gets its own case guide too.

The game consists of a series of separate cases, each of which raises a number of questions that each player tries to solve before anyone else. To do this, once the case and the questions have been read aloud, players proceed to visit the locations where the clues are located.  The case file tells you to where to lay out the double sided cards, but be careful not to have them showing the answer side up! 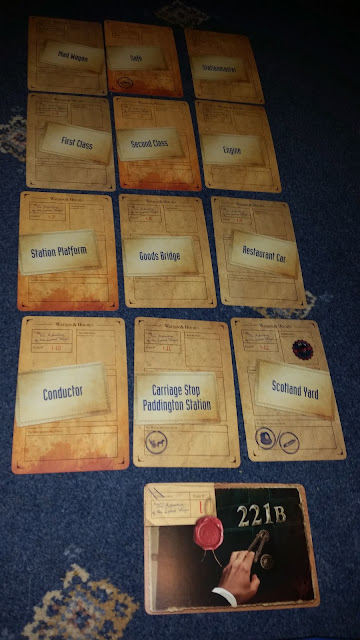 Each location cannot be accessed by more than one player at any one time, so if two or more players want to go to the same place, the player who travels there the fastest (i.e., he who uses the largest number of Carriage Tokens which is almost a bidding mechanic) gets the clue, forcing the others to go to a different location. Once every player has a destination, they proceed to read in secret the clue that was discovered at that location. They can discreetly take any notes they deem appropriate. Once this is done, the cards are returned to their place so that others can read them in later turns.

This procedure is repeated during each turn until one player believes he has found the solutions to the case; at that time, he must go to 221B Baker Street to check if his answers are correct. If all the answers are correct, the player wins; if they are wrong, he will have lost and retires from the game, and the game continues.

Each detective will also have the invaluable assistance of a number of Sherlock Holmes' allies, above all, the good Dr Watson and of course of the detective himself. 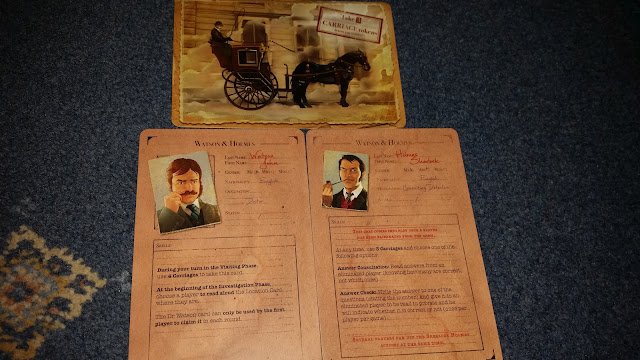 You may even have a helping character that gives you a special ability but it's all about getting to 221b Baker Street first and getting the answer the questions presented in the case right. Even if you are eliminated you still get to stay in the game, as you take the character of Sherlock Holmes then, and players can go the Sherlock location and you can advise if they ask you how many clues they have that are correct. 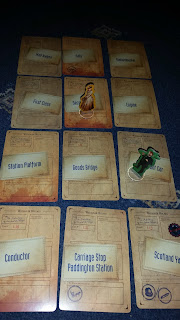 There are things that may hinder you,  such as the presence of the police tokens making locations harder to access, or lock picks.. yes sometimes you must be sneaky to find out your answers.

Its really simple in concept to play, easy to teach, beautifully presented, with lovely art on the case books, not so much on the cards, but the game is full of theme.... and can really appeal to those who aren't your normal type of boardgamer.

The only downside i have, is that once you know the answers to each case, you know, so replay value is low, unless you are sharing it with lots of new people all the time, and just taking on the role of Holmes yourself!

You could even play it solo at a push, but it wouldn't be a huge amount of fun just moving around all the cards, really its designed for more players, so get a get a group and get going on it! 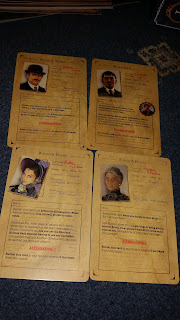 On a random note, the way the box slides out so it can be stored vertically, like a book on your shelf... nice little touch, but then the game is very aesthetically pleasing.


with an RRP of £39.99 it may seem high for a game with little replay value, but as an experience its great and thematic fun, and if you can a few players in its even better,  so head on over to your local game store and grab a copy.
Come and join us in all sorts of gaming chat in our Facebook group here, and come follow us on Twitter @rollyoursix and Instagram join the chat, and tell us about your games!
Labels: Sherlock holmes