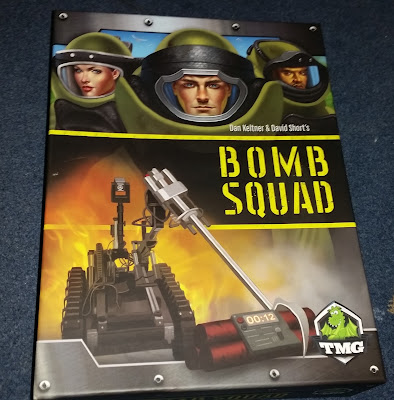 Sometimes you come across a theme that seems perfect for a game, and you find mechanics that are different and could work that work well too.  Its not oftern you find both at the same time... but does this game hold up and have it all?


The sergeant hangs the phone up. "Multiple hostages, numerous bombs. We're up." We grab our gear, prep the robot and load the van. It's go time...

An unknown terrorist organization is on the rise, looking to spread fear while profiting from the chaos they release. You, your fellow members of the Retro City Bomb Squad, and your trusty Bomb Squad Robot are the only barriers in the way between those dastardly villains and the innocent civilians of Retro City. Lives are at stake — and time is ticking — so let's go!


Bomb Squad is a cooperative game in which 2-6 players are members of a team operating a disposal robot with the mission to disarm bombs and save hostages. The players work together, racing against the clock to provide the appropriate instructions for the robot to achieve their mission objectives. Bomb Squad features:
So lets pop it open, take a look and see how it plays! 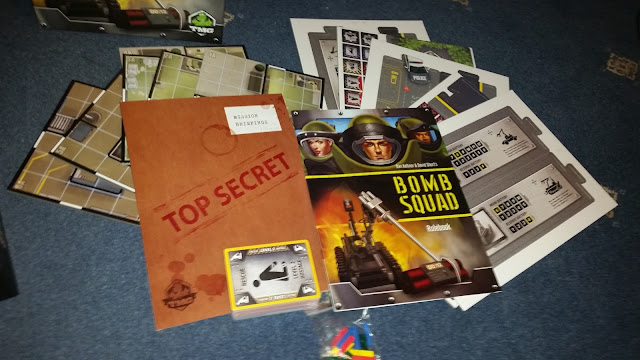 So inside you get a thin rules booklet (the rules are not complicated) and a mission briefing book with 12 scenarios in it, plus some nice high quality boards for your map layut, and tokens of course to show you where everything is set up on the map.

Bomb Squad is at its core a cooperative game where players  don't see the cards they are holding but see the others that the other players have,  and can give clue, play or discard them.This may sound hard, but its described easily, as in what kind of hints you can give and so on as conversation is limited, but the number of clues isn't. The game runs in real time on a timer, and that builds up the tension, so you can not sit back and plot, you need to be on the go working as a team at all times.
Set up the game looks great, and the card is nice and thick and solid quality too. 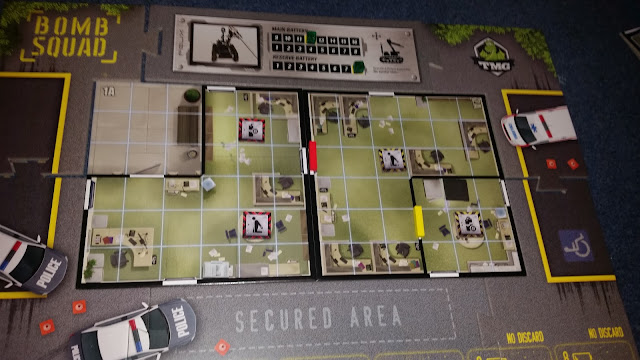 The tokens represent, hostages, bombs, or more later like security cameras and other bits you will find out!  The maps can grow in size with plenty of layouts, and double sided tiles for variety too.

After choosing a scenario and setting it up looking at the mission guide book, players have a set of actions they can perform, but only one a turn.
- give intel;
- play card;
- discard card;
- activate the robot.

To give intel  you must pick a type or a colour of the cards, and give a clue regarding all the cards in the hand of the player you are giving intel that fits the criteria, such as you have 4 moves, or 4 yellows and so on. 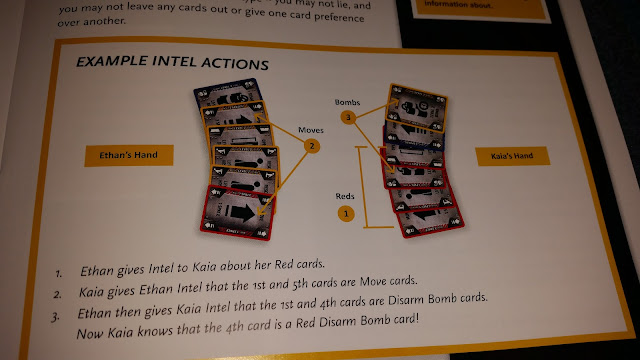 Cards are played in a row, face down, which programs the robot. 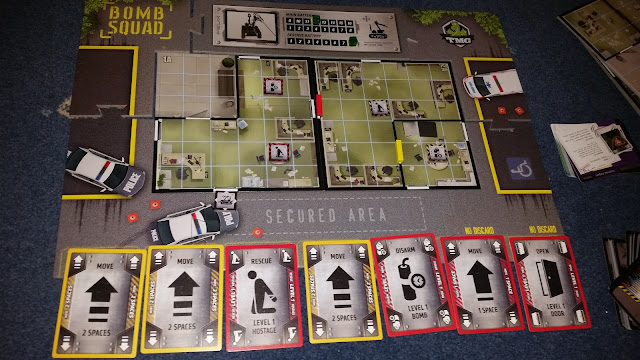 Then once full, or early if decalred they are flipped over, can be arranged and sorted and the robot does his move, showing the pips for each cost of battery he uses.  If you run out of battery you go onto the reserve battery, and if that is empty you lose.  So you then can adjust your cards and begin your robot move, but if any cards are wrong... or unable to be completed they will cost 2 battery power as well, so be careful!

You can discard a card to provide one energy to the robot so you better make sure he has plenty before a long activation string.

The goals of the scenarios change, but usually consist of deactivating all the bombs, with some adding the rescue of the hostages or maybe other things. The scenarios end in defeat if the time runs out or the bot has no more energy left. Plays win if they fulfill the conditions required in the time given, but there may be point effects if you use reserve battery.


There are some tough choices whilst playing, such as what kind of clue to give and to whom. What cards to play (remembering what was already played as they are face down). When to activate the robot and in which order use the programmed cards, and of course making sure the robot has enough battery.  All under the pressure of a real timer!

Its a good fun cooperative game, though it can get a bit.... focused due to lack of conversation under timer pressure, but the mechanics are solid, simple, and it has a theme that I like, so i think its well worth giving it a go, and wit some nice training missions in it you can get it taught fairly easily, and the game really does not take long to play at all, though the timer may put some people off.

There are also some "Role" cards you can pick to spice things up in the game with extra abilities too.... 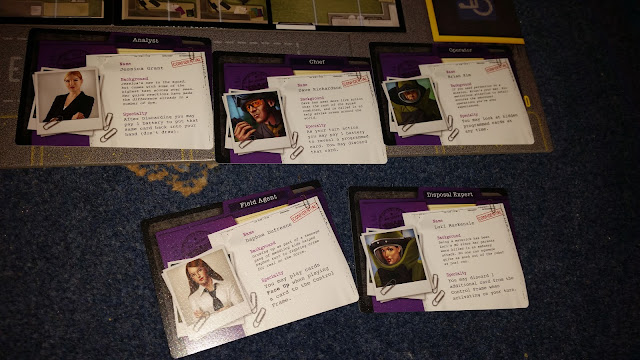 with an RRP of £36.99 for this it should provide some solid coop multiplayer fun with a nice hint of pressure and  a theme not really seen in a game that actually works well,  so head on over to your local game store and grab one.
Come and join us in all sorts of gaming chat in our Facebook group here, and come follow us on Twitter @rollyoursix and Instagram join the chat, and tell us about your games!
Labels: TMG