It Seems that these Escape Room things are all the craze now, seeing bits about them everywhere, and hearing about people going to try them. Trying to figure out clues to escape well, a room. Space Cowboys have decided to bring that home, with some hard puzzle work to gain that kind of theme. 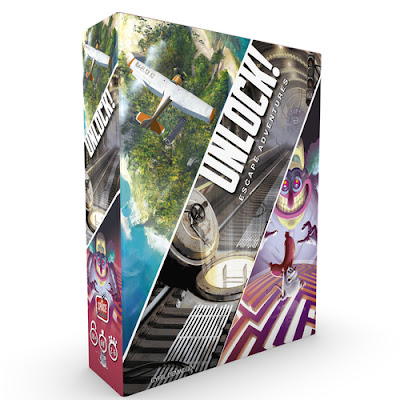 Unlock! is a cooperative card game inspired by escape rooms that uses a simple system which allows you to search scenes, combine objects, and solve riddles. Play Unlock! to embark on great adventures, while seated at a table using only cards and a companion app that can provide clues, check codes, monitor time remaining, etc.
Unlock! Escape Adventures includes three separate scenarios for you to explore:
An included ten-card tutorial allows you to learn how to play without reading the game rules.

You do need a free app though available on IOS or Android.

So lets pop it open, and take a look and see how it plays, but I will only be going through the Tutorial with you, i don't want to give away and spoilers, 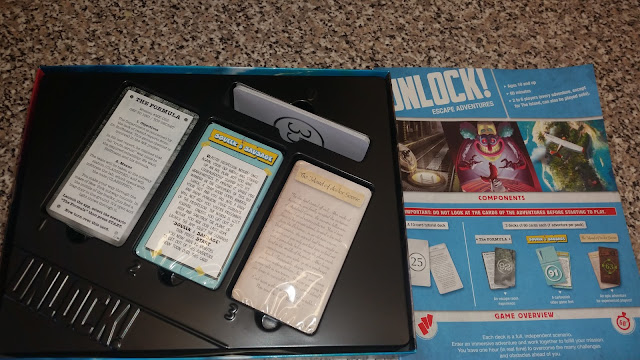 So in the box you get a tutorial, and they are right, you really do not need to read the manual to get the game and get playing, then there are 3 solid adventures, each of which has an hour timer on the app for it, but you can get penalties if you get it wrong. 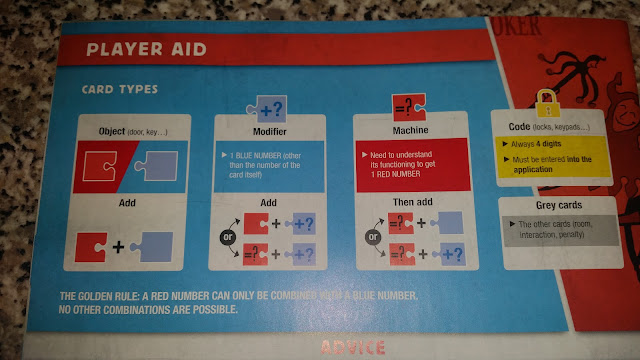 So here's a basic overview, though they even give you reminders on the cards themselves.... the idea is to add the numbers together and follow the card path... but only certain things can go together. 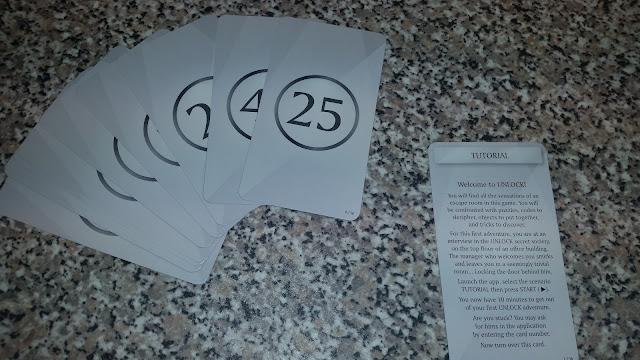 When you pick a scenario you get an overview, and a deck of cards.  This being the tutorial is shorter.  It gives you an overview of what you are tying to accomplish, Fluff story if you will..... then it tells you to pick the same adventure on the app (you will need this to input codes, or penalties, or can even ask for hints, though at a cost to your score and time) 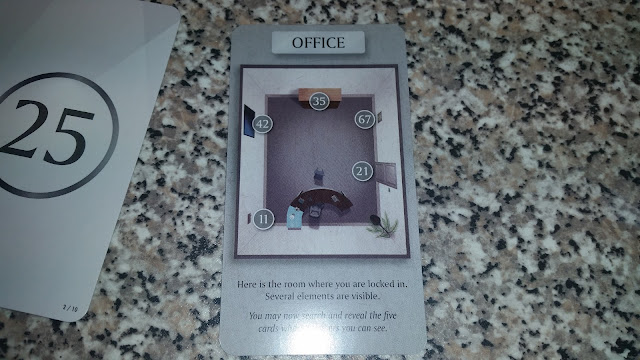 So when you flip the card it tells you what you can see, and what other cards to reveal..... 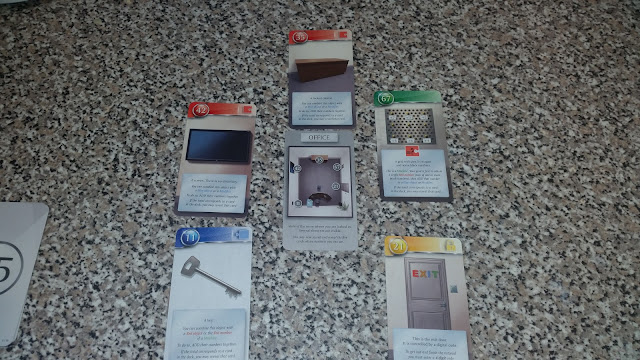 So you follow those examples, and begin to take a look around and see what you can you do.... but all the time the timer on the app is ticking down 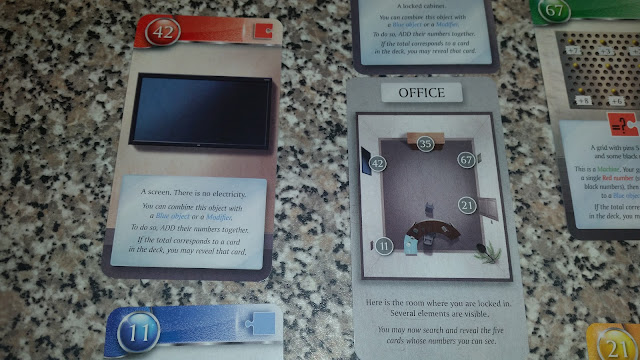 Hmm... it says the TV doesnt have any power, lets worry about that later, a key and a locked cabinet seem like a good place to start. 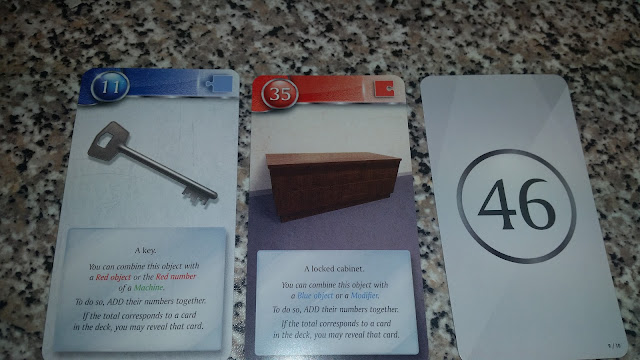 so a key.... it tells me i can combine with a red number, or a machine, and how to do it... i add the numbers together, and i the total corresponds to a card in the deck, i can reveal that card, so 11 add 35 equals 46, and there is a card 46 so i flip it over, and it gives me new instructions to discard the two cards i combined. 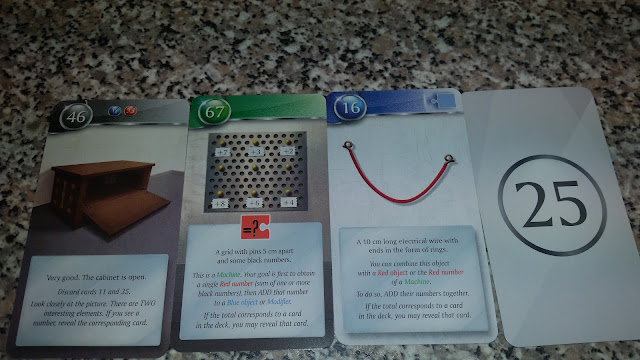 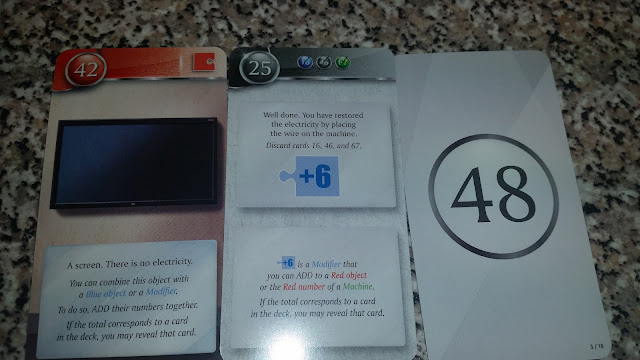 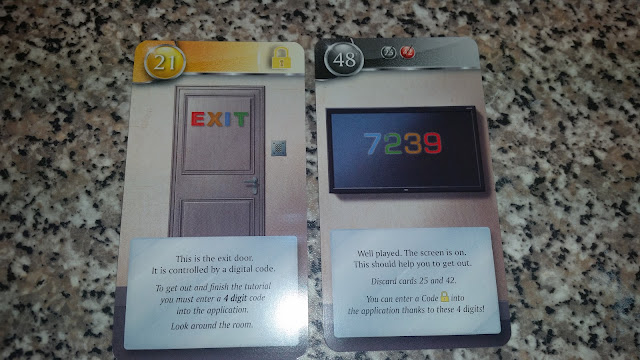 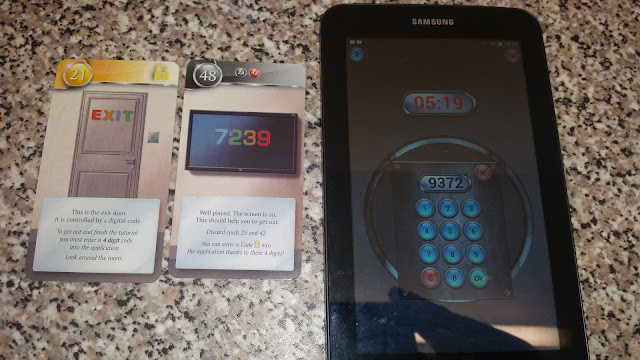 punch it in... and success!! i have escaped!

Well this is a basic over view of the tutorial, there are a whole world of puzzles in the other scenario, but i don't want to spoil them.  Be Assured, there is a lot of variety, and some large challenges too.  Its certainly the type of game to get you thinking, and that's one of its biggest draws, its a puzzler, and perfect for non gamers, they don't have to worry about rules, and dice and things, just deduction and logical thinking.  It plays ok solo, though its not as much fun as discussing it with others and trying to find a solution together, which is where it really shines, and one scenarios does specify 3-4 players, but you can do it with less.  Replay ability may be an issue to some, as once you have played the 3 scenarios you know what to do, but you can either wait a long time till you forget and try again, or enjoy sharing with other people who haven't tried to get them into gaming whilst you manage the app and enjoy watching them.. Though for the amount of fun you will have the price is pretty good, so do not let it put you off, you will get a good value of entertainment for it, and its perfect for expansions, just a deck of cards, and its a whole new adventure to work through.


It comes in with an RRP of £26.99 so head on over to your local game store and grab yourself a pack.