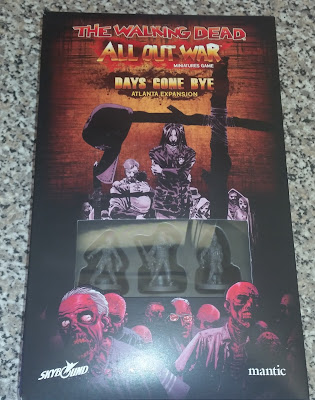 When Mantic Games Released the starter set for The Walking Dead All Out War I was suitably impressed.  Its an excellent game system, and you do not need to be a fan of the comics to follow, and since then they have hit with all sorts of great boosters for the game from adding extra 3d Scenery to classic characters like Morgan and Carol among but a few, let alone the whole Single player starter set Prelude to Woodbury

Now though its time to take a look at another expansion for the game.....


Days Gone Bye is a narrative expansion to The Walking Dead: All Out War, containing a series of scenarios to recreate the early exploits of the Atlanta Group, from Ricks’ first forays into Atlanta, to the Walker attack on the camp, to his dramatic showdown with Shane.


Based on the events from the comics covering the early exploits of the Atlanta camp survivors, this expansion includes six new scenarios to play through as well as rules for creating your own characters from scratch. This set also includes 4 new Survivors – Dale, Jim, Allen and Donna – 2 extra Walkers, new Character cards, Equipment Cards, Event cards and scenery to add your games.


So whats inside this box then? 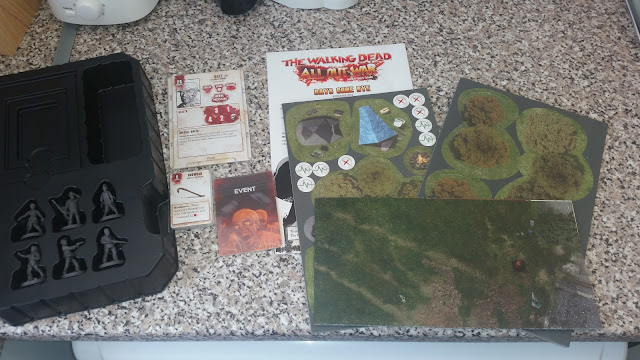 Quite a bit actually.... it may surprise you.  As always a nice plastic inner contains all the models and cards, but there is also new punch out card terrain, and a new map, as well a new campaign book that introduces new rules, such as fire.. yes walkers can wander around in flames!  Or course you get new character cards, new equipment too and events! so lets look at the cards..... 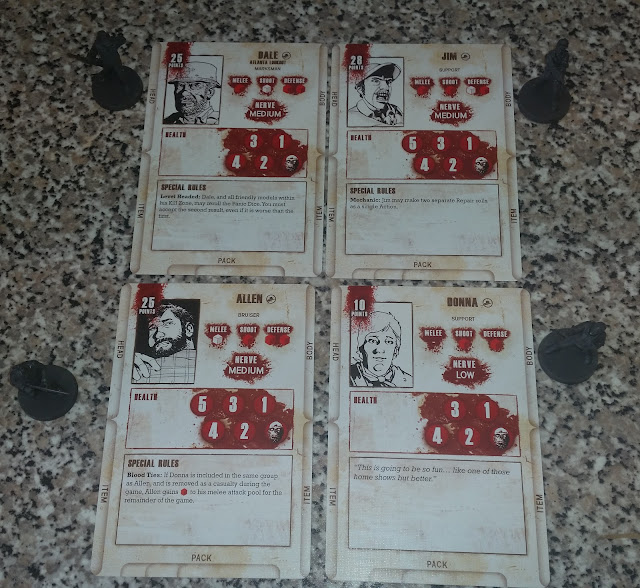 We get four new survivor models, and their matching cards.... Dale is a classic, and his RV was included in the starter set, so don't forget that like i did at first! he has good stats, with 4 health, red melee, 2 red defence, and a white shoot.  His special rule is Level headed, letting dale and all other survivors in his kill zone reroll their panic tests, though if its worse you must accept it, but its still  a great option to try to nullify the worst rolls.

Jim has n ability linked to a new rule in the expansion... mechanic.  He can make two separate repair rolls as one action.  He has a sold 5 health, a red melee and shoot, and a white and red defence, as well as a solid 3 slots in his pack.  Hes good for the scenarios in here with his ability, but then with solid stats and a low cost and good pack size, hes not a bad choice anytime.

Allen is a solid bruiser with a white melee dice, red shoot, and 2 red defence,  With medium nerve, and 5 health he should be sticking around the fight nicely.  He also has 3 pack slots good for toting some gear around.  His special rule is Blood Ties.  this works if Donna is included in the same group, and if she is taken casualty.  If she is Allen gains a red die to his melee pool for the rest of the game, so the more.. unscrupulous gamers may throw Donna into harms way a bit more knowing the benefits if she bites the dust.

Donna herself is cheap at only 10 pints with 4 wounds, but she does have low nerve, no dice in melee, one in shoot and one in defence.  Her best use in my opinion is drawing walkers away from the group, and maybe falling prey to power up Allen! 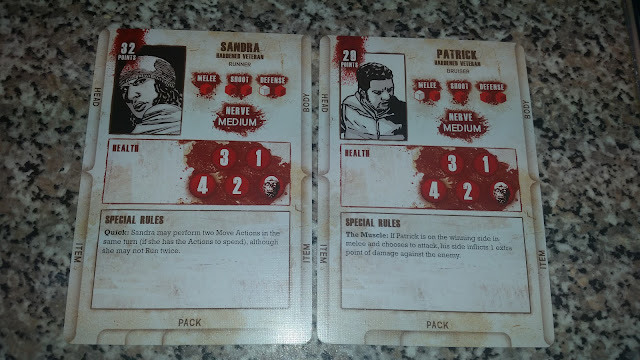 You also get some new more expense but better stats for Patrick and Sandra from the starter set, i imagine due to them surviving and gaining more skills, but its always nice to see new versions for more options in game, and these provide some tough neutral options. 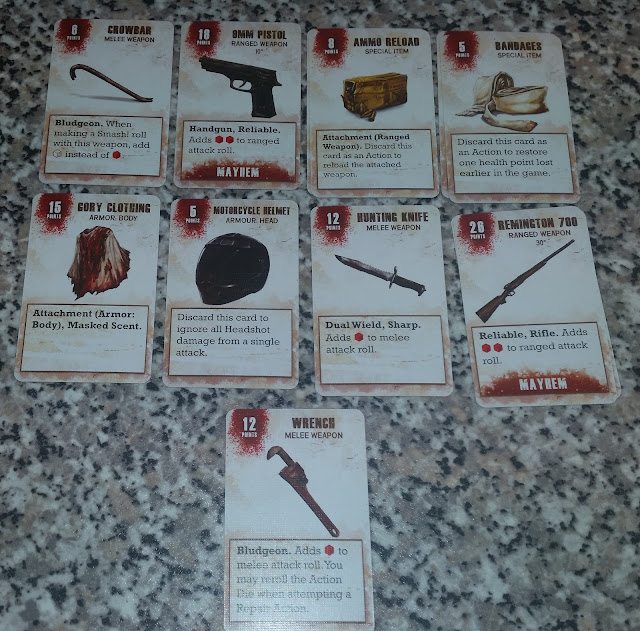 You get plenty of new equipment for list building and loading out your survivors  The crowbar adds to your melee and smash.. Gory clothing can stop walkers an inch before they get to you in you are not making noise.  Ammo Reload, and Bandages we have seen before but they are certainly useful, like the 9mm pistol, another couple of red dice on a shoot roll and reliable? yes please.


The motorcycle helmet can be discarded to avoid all headshot damage in a round, real useful to keep alive, or avoid being bitten too.  The hunting knife can be dual wielded and adds an extra red to melee.


Then the lovely Remington 700 rifle.  It has the rifle rule of course, meaning you cn use your second action to aim gaining an extra red dice, and its reliable too, and as normal adds two red dice, and lets you reach out to 30 inch range.  A Great weapon!


Lastly the wrench, a melee weapon that adds a red dice, but... it does have another use. letting you reroll the action dice whilst trying a repair action, which combined with Jim seems the best choice! 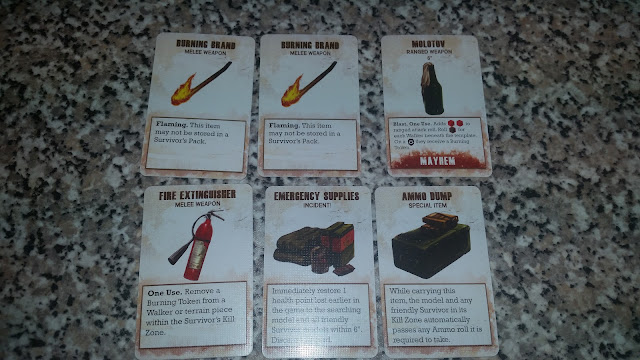 There are also some new items that end up going in the supply deck..... things like the burning brand, or molotov cocktails! yes you can throw it, and walkers will wander around on fire. 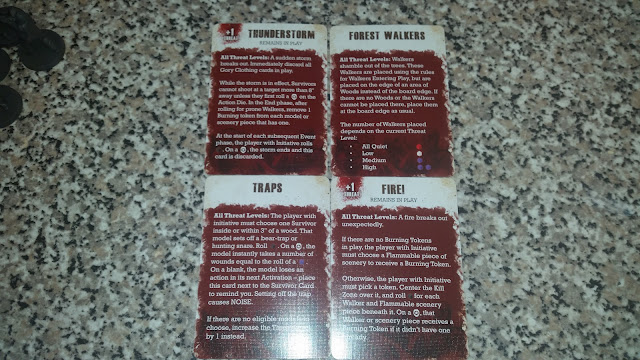 You also get some thematic event cards to add to the deck that go nicely along with the scenarios... It tells you when to add witch ones, or you could just combine them all into the main deck, its your choice. 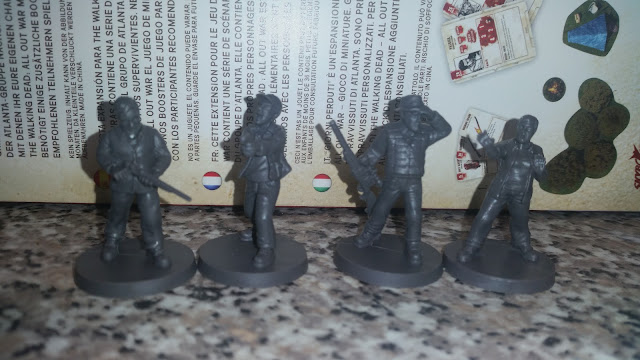 The new survivor figures are excellent as you expect from Mantic in this range, full of character, detail and movement.  My favourite one being Dale, hes just in that classic pose you expect of him, stood on the RVs roof. 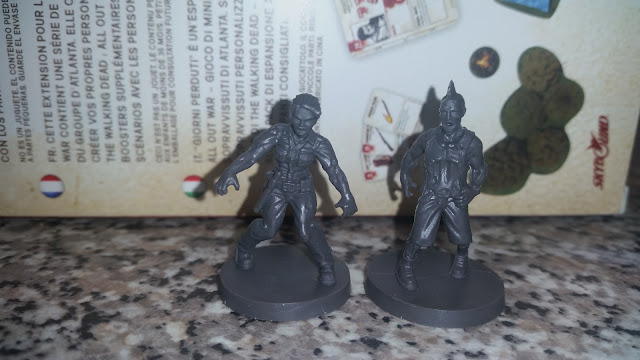 You also get 2 new Walkers to add to your horde, and there will be plenty in these scenarios, so you will need them! 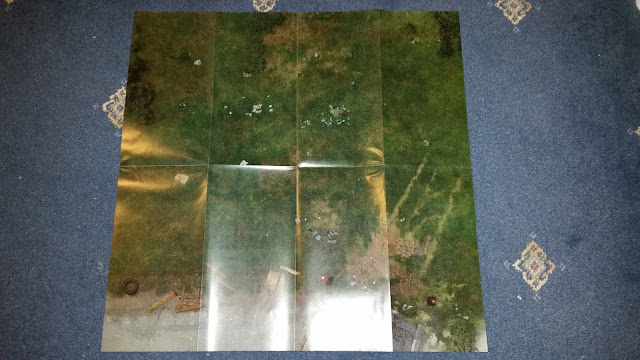 The new papaer playmat adds another choice for gaming, and is deisnded for the scenarios in this book, but there is no reason you cant take your regular games here 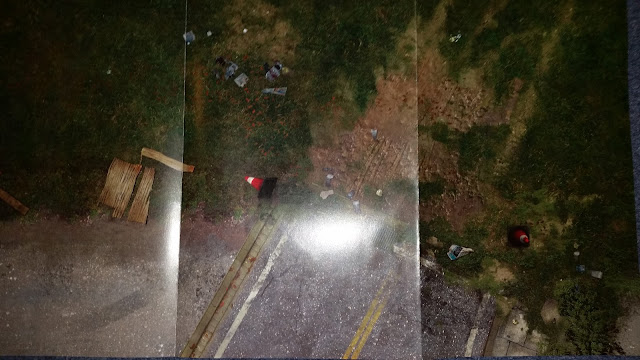 When you look closely the detail is great, and combined with all the other scenery you get in this pack, like pop out tents, woods, and camp fires it looks great all set up

This is a great value pack its full of scenarios where they give you the survivors that featured in the story, and outcomes depending on how the last mission went, though of course they also provide points values if you want to use our own characters... Speaking of your own characters, it also provides rules to create your own survivors!! so you can have yourself in game, and see how you would fare in the world.  For the content you get its well worth the price, let alone the models, and new scenery to mix into the starter set.  Another great move Mantic! I cant wait for more sets of this, great game, great content, and excellent storytelling its a real gem of a game system that if you havent tried it, you must!

with an RRP of £24.99 for this, its great value for new gear models, solo cards and a long solo or cooperative campaign too that can all be included in to the starter set or expanded with boosters,  so head on over to your local game store and grab one.
Come and join us in all sorts of gaming chat in our Facebook group here, and come follow us on Twitter @rollyoursix and Instagram join the chat, and tell us about your games!

Labels: Mantic Games the walking dead all out war