A long time ago, in a galaxy not that far away we look at Star Wars Imperial Assault from Fantasy Flight Games, which is a great RPG style one against many game, where the valiant rebel heroes ( or Rebel Scum depending on your point of view) try to outdo the Imperial overlord.  Well since then there have been quite a few expansions for the game, and today we are going to take at one of the big box ones, with one of the "biggest" villains.....

If I told you half the things I’ve heard about this Jabba the Hutt, you’d probably short circuit.”
–C-3PO, Star Wars: Return of the Jedi

Imperial reprisals have swept the galaxy, targeting not just the Rebels, but their families and loved ones as well. In desperation, you and a team of other Rebel operatives have gathered as many refugees as you can in hopes of shepherding them to safety in the Outer Rim. Your escape is discovered, however, and you’ve been shot down on Tatooine. Here, the power of the Empire is not as strong as elsewhere—but that doesn’t mean you’re out of danger. This is the domain of Jabba the Hutt, and you’ll need to play by his rules if you want to survive.
Jabba’s Realm is a new expansion for Imperial Assault that offers a wealth of new content for your campaigns and skirmishes. You’ll find an entirely new full-length campaign that challenges you to survive among the desert wastes and criminal underworld of Tatooine, even as new skirmish missions invite you to battle in the Nal Hutta Borderlands or around the fabled Pit of Carkoon. 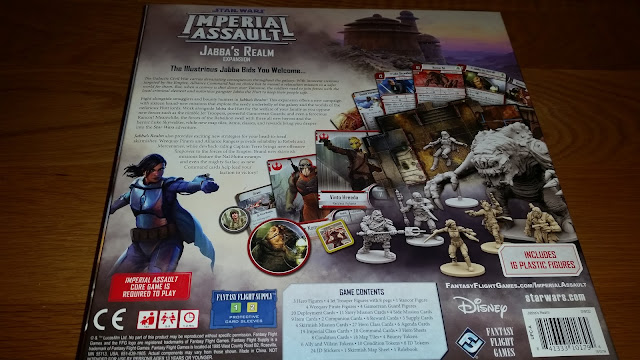 You do get a lot of goodies in this box! models, cards new terrain tiles, all sorts of bits and pieces... 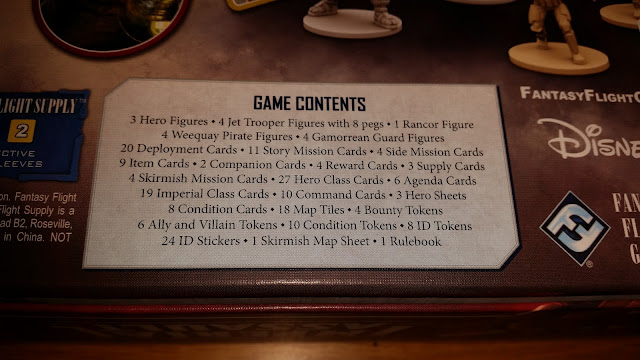 so lets take a  further look into Jabbas Realm...... 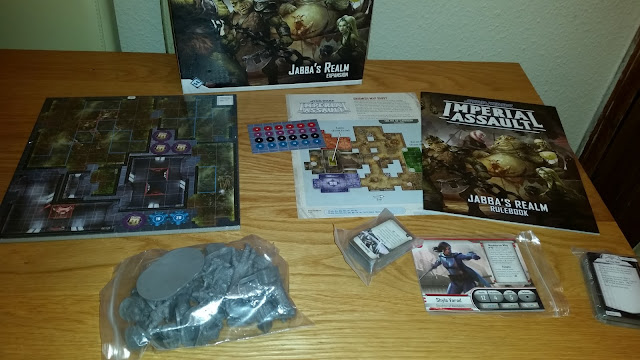 Eighteen new double-sided map tiles evoke the opening scenes of Return of the Jedi, giving you access for the first time to Jabba’s palace, his pleasure barge, and iconic locations like the sarlacc pit. Meanwhile, sixteen brand-new plastic figures offer new warriors and heroes for the Imperials, Rebels, and Mercenaries, even as new Command cards, Deployment cards, Agenda cards, and Class cards give you countless ways to customize your game. With characters like Jabba the Hutt, (sadly no model just a token) the Rancor, and Luke Skywalker as a Jedi Knight (again as a token not a model) joining the game, this expansion draws you into the Star Wars saga like never before. 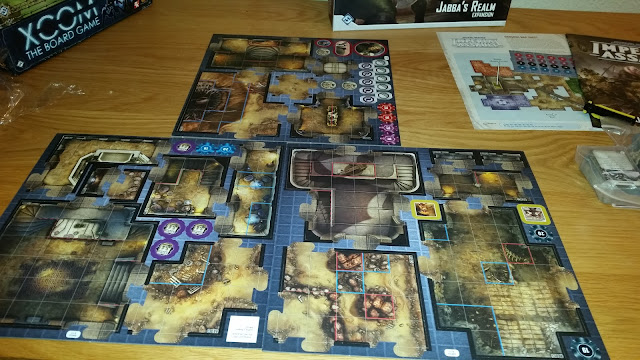 The New Terrain tiles are stunning, and you get three sheets of them as always they are double sided for even more versatility. 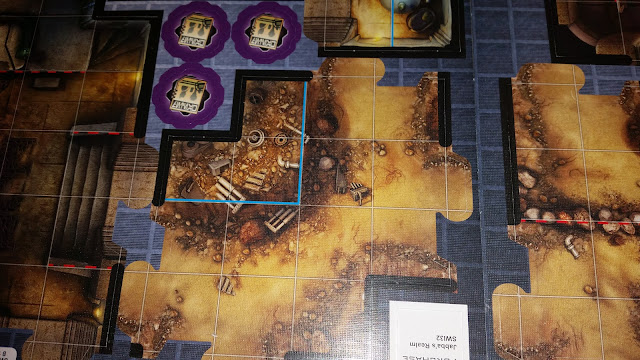 The quality of the cardstock is top notch, as is the art 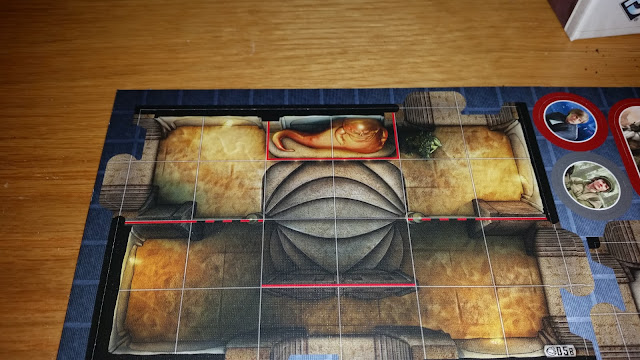 I do like the Jabba Statue tucked in there, but you will see places you will recognise from the films, like Jabbas Skiff barge, and his throne room, the Sarlac pit and more. 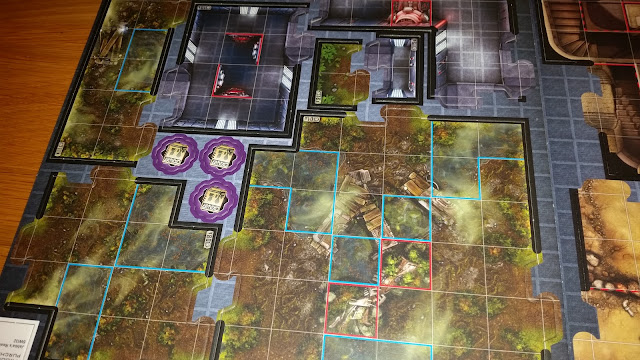 What’s more, four new Ally Packs and Villain Packs arrive corresponding with the Jabba’s Realm expansion, highlighting the expansion’s most famous characters and offering new cards and missions for your campaigns and skirmishes. Whether you learn the ways of the Force with Luke Skywalker, launch an unexpected ambush with the Alliance Rangers, lead Imperial forces with Captain Terro, or build a criminal empire with Jabba the Hutt, you’ll find the figures you need within these expansions. For more information on these figure packs stick with us as well shall looking at one each day this week, and yes they will include Jabba and Luke to replace those tokens. 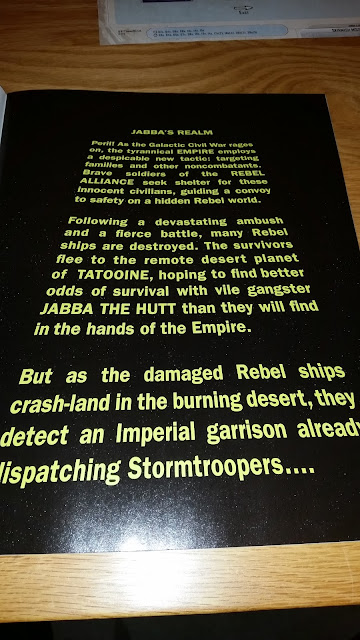 Your games of Imperial Assault gain an entirely new, full-length campaign with the addition of Jabba’s Realm, challenging a brave team of Rebel heroes to survive after they’re shot down on Tatooine. These heroes will soon learn that Jabba the Hutt may be willing to protect you from Imperial forces, but his protection comes at a price. You and your fellow heroes will need to decide just how far you’re willing to go in the service of an underhanded crime lord.  I cant tell you more as it would ruin it, but the stories in the missions... excellent, great plot lines, and really does a good job of showing you the seedy underworld of the Star Wars universe. 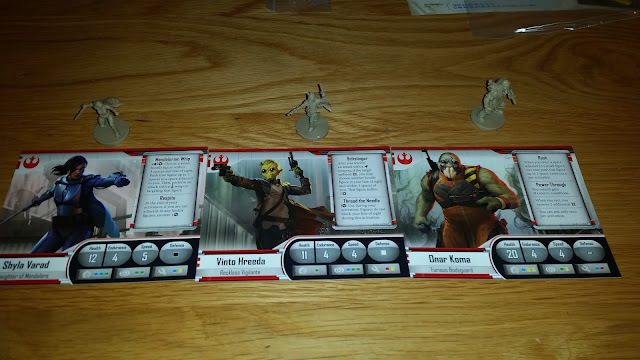 Three new heroes join the Rebellion in this expansion, each ready to fight the Empire in their own unique way. Shyla Varad is a Mandalorian warrior, renowned for her skill with blade and whip, and eager to practice her warrior traditions against the Empire. Vinto Hreeda, on the other hand, is a reckless vigilante and gunslinger—an expert sharpshooter who has plenty of grudges to bear against the Empire. Finally, the Rebels gain the allegiance of Onar Koma, a hulking Aqualish bodyguard with an almost unmatched strength in battle. The Imperial player will need to work his hardest to take out three heroes as well-equipped as these.  The skirmish versions of these characters however are Scum faction so they are mercenaries, which is a nice tie in.  You could of course try using these in your normal Imperial Assault Campaign, or indeed bring over your characters from there for a nice trip into Hutt space. 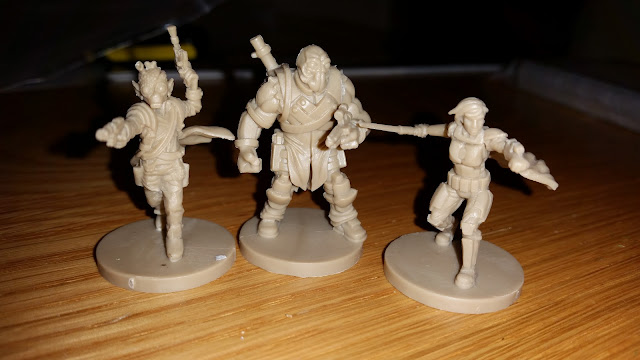 The models are as you would expect, nice and crisp and detailed. Perfectly playable as is, or if you wish to apply some paint, then they will come out very nice indeed. 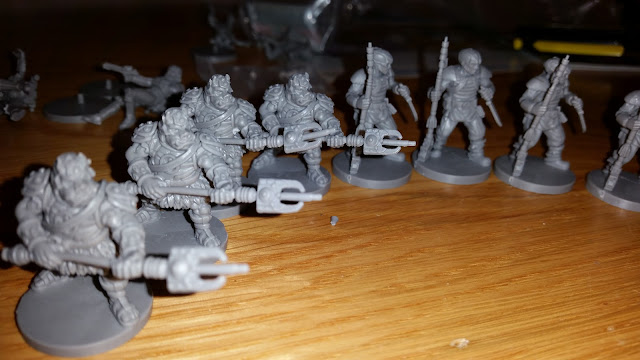 its just just heroes you get but plenty of reinforcements for the imperial side and mercenary player.  You get four Gamorrean guard, the iconic green guards of Jabbas Palace, and four Weequay pirates.  Again lovely crisp models, and you get the campaign card for each of them, and of course the skirmish version so you can take them in points matches. 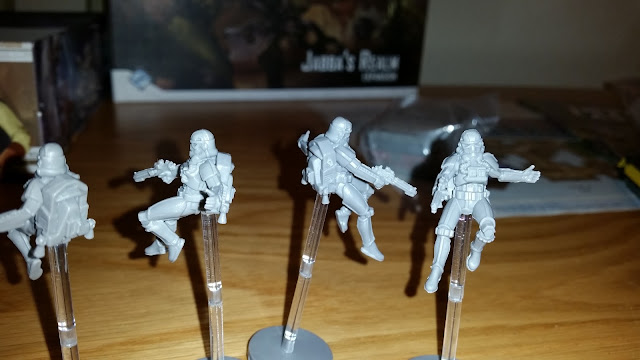 We also get four rather nifty Imperial Jump troopers... Storm troopers who have rocket packs strapped to them, and use the Xwing style Flight stands to look rather cool. 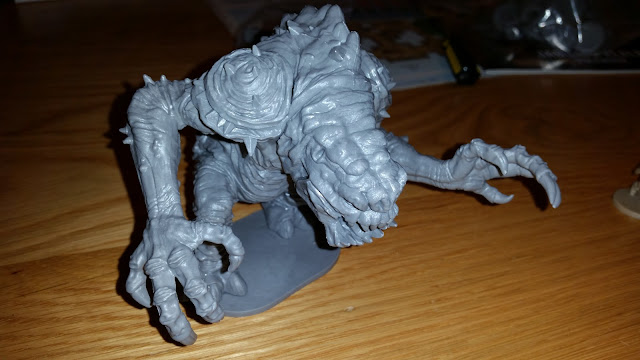 Then there is the big boy in the box.... the Rancor! this model is huge, and heavy... really well detailed too and great in scale with other models! 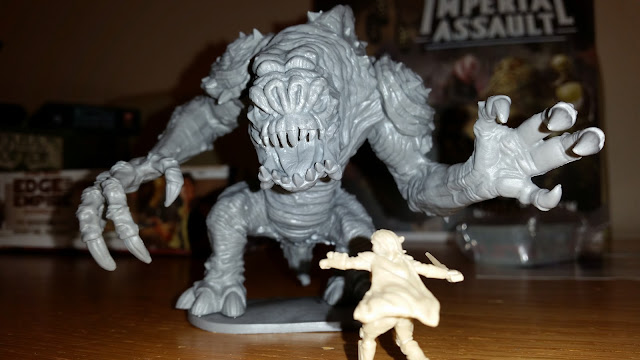 Hes super sit on your shelf out of the box cool!! There was a downside though, the base he required some assembly, just push fit, nothing too hard, but sadly the base had warped so wouldn't fit at all.  Popped it into some nearly boiling water, let it sit, then reshaped it whilst it was a bit more flexible and its fine now, a little lumpy on top, but its flat and he fits on it so i  am happy, but do keep an eye out in your set for a problem like this. 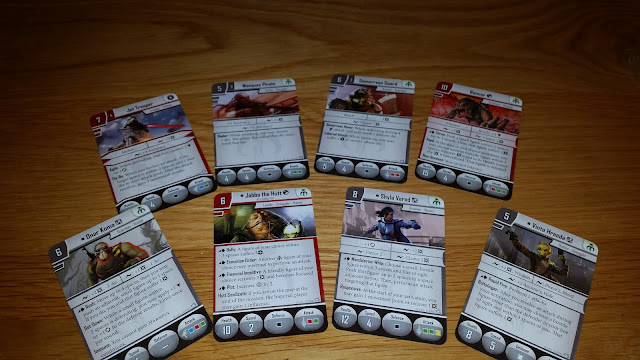 As you would expect you also get all the skirmish cards for your models included, each with their own abilities and play styles, Jabba for example.... he can hit hard in fisticuffs, but his abilities are more aimed at manipulation and control of others which is very fitting for a giant slug crimelord. 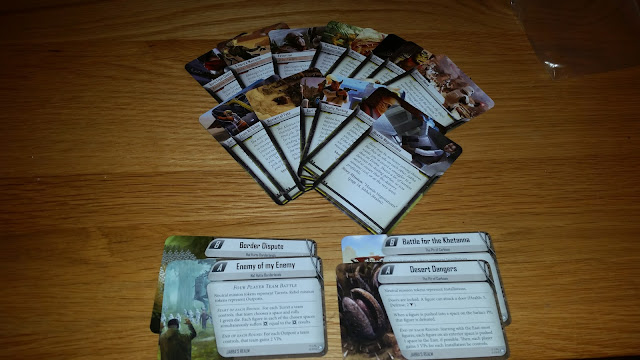 You also get new skirmish missions and a map design for up to 4 player skirmish! so that's something new to try out, and of course plenty of skirmish upgrades as well to help build your decks the way you want to.  with this combined with your core set you are going to have so many options 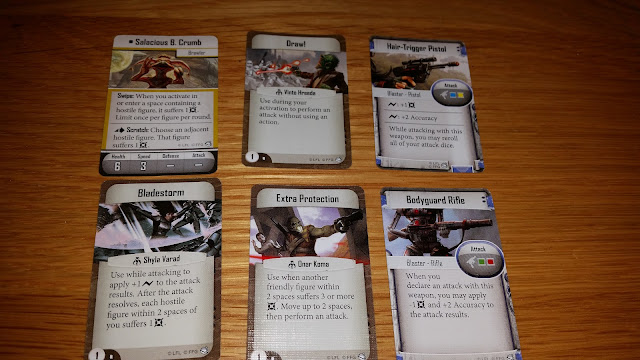 As well as getting the side mission for each of your heroes and their upgrade decks as well as you would expect, you get some other cool upgrades, from the hefty bodyguard rifle, to Salacious B Crumb! yes he makes an appearance and doing his laugh is kind of required too!

So is this worth getting? Yes..... if you love Imperial Assault then this is a must have, it brings in Jabba and the underworld, which was such a big part of the Return of the Jedi film, and was certainly something I wished had been more explored in the film, you get new cards for your heroes, a huge and awesome new campaign, new models for skirmish, new missions, new characters for your campaign so you can try these in the original for a different play style, a super cool Rancor model.. I mean he is just epic! its a great set, and with Fantasy Flight Games confirming an app to introduce pure coop play later this year, its only going to get better!

It comes out with an RRP of £54.99 so head on over to your local game store and grab yourself the set and join the underworld, or the fight against it!