The Vs System has so far been all about the clash of mighty super heroes in the marvel universe, to have a look at how its played go check our look at the Marvel version here and its expansion Defenders.

Now you have a good idea how it plays,  the VS System takes a detour into a darker sci-fi world with the Alien Battles, same great game, different theme. 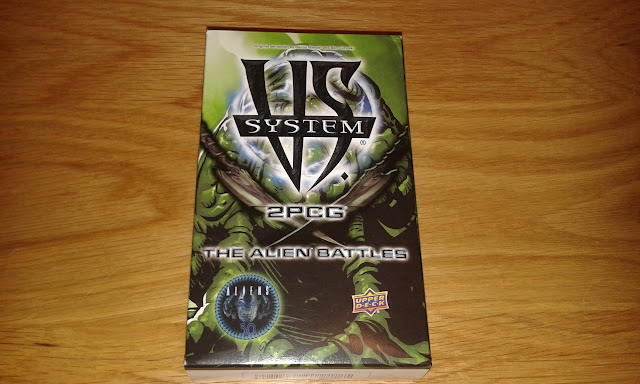 In the box you get 200 new cards, the tokens you will need, and a rulebook to get you playing, though if you have already played VS you wont take long to flick through to see any slight changes, which are more card ability based rather then main rules. 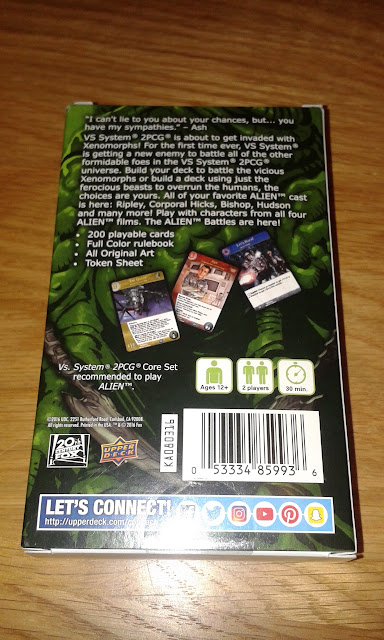 It says on the back a VS core set is recommended to play, but i dont think you need it, as the cards are self contained here though of course fully compatible.

Now whats in the box? 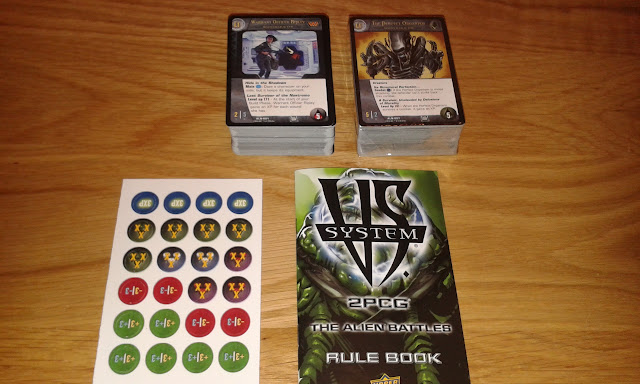 Its nice and simple, a sheet of tokens, your rulebook which is nice and simple to follow and two stacks of cards, one Xenomorphs, one The human force in the Aliens World. So Lets take a look at the main characters you can use in the Alien deck.  You can see you get 4 choices, and they cover the 4 movies will so you can sort of theme your deck to a certain film if you desire.  Each of them feel different and have different stats and abilities so its easy to find a favourite, or one that suits your style.  This is one of the things i love about the VS System compared to other card games, you can just change your main character and the theme and style of the deck can change totally.  Of course these are available as well in supporting characters in case you fancied taking them when not using them as a main character. 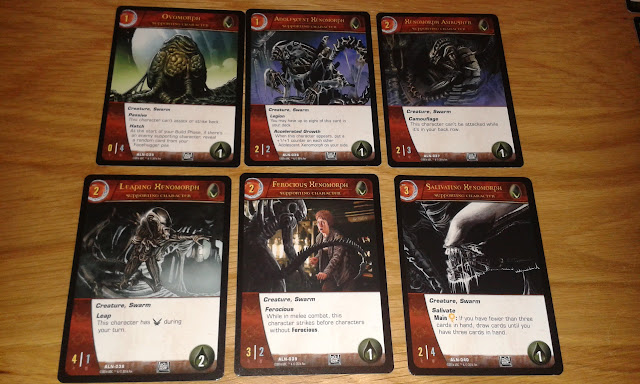 Just an example of some of the supporting characters you can have, i do not want to show you all of them, there needs to still be some surprise as you look through yourself.   The art work is great, very atmospheric and really catches the theme of Aliens.  Not too surprisingly most of your supporting characters are different versions of aliens, but all of them are pretty unpleasant. 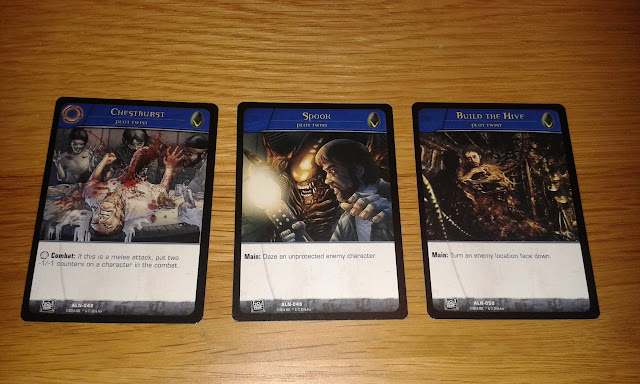 Some nice plot twist cards all themed on the films, again with great art provide you some tactical options. 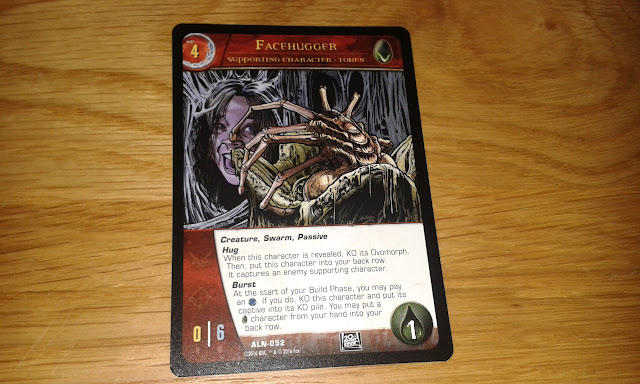 Yes the classic Face hugger is in here, and it captures opposing characters! nasty stuff there, but super in theme. 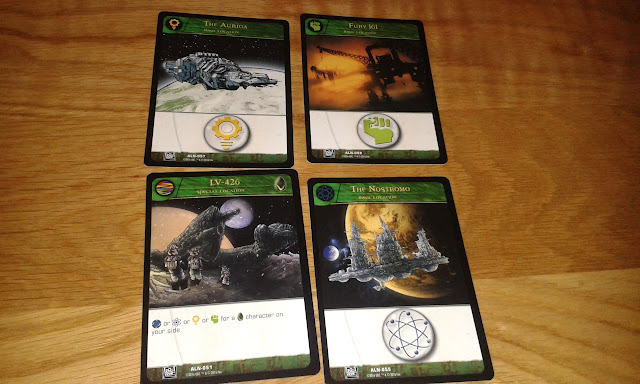 locations that popwer your characters and provide the spending power (like land for MTG players) again have classic locations on them, LV-420, the Nostromo, and so on. 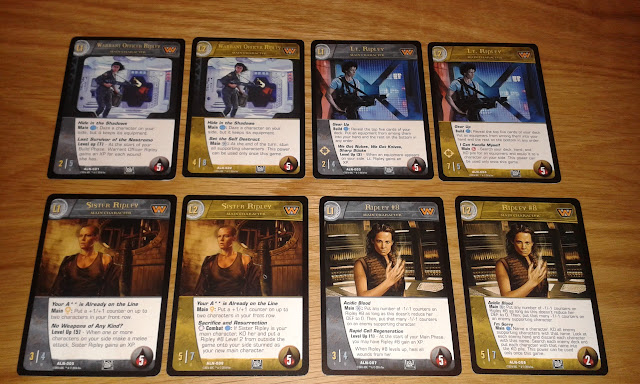 Now for the Human side, well not always human as you will see..... The four main characters are all different versions of Ripley from each film, so we have Aliens Ripley, Alien 3 Ripley, Alien Ripley and Resurrection Ripley.  Lt Ripley from Aliens being my favourite, as its my favourite film.  I can understand whay she is the main character, but i would have liked to see some others so you could do perhaps a Marine squad from Aliens. Though.... i am sure expansions will follow, so its worth keeping an eye out. 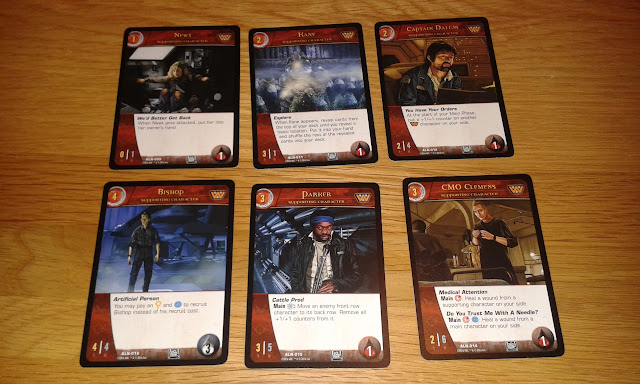 For Supporting characters you get ones again that cross all the films from Newt, to Parker and Clemens providing you a nice way of themeing a deck or jut having a mix of your favourite ones. 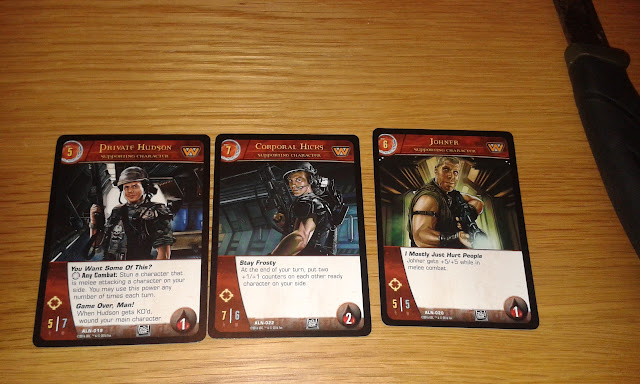 Of course it wouldnt be Aliens (to me) with out Hudson and Hicks..... though again i hope for an expansion where i can take Apone and a marine squad that would be great fun. 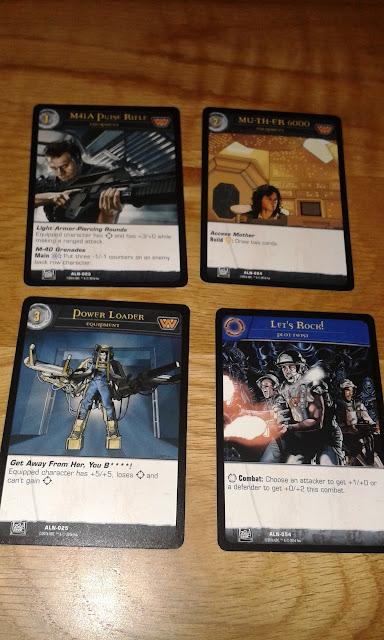 You only get one twist... Lets Rock which can help improve your damage output, but you do get some iconic equipment in the form of the Pulse Rifle, the power loader and Muther the computer from Alien. 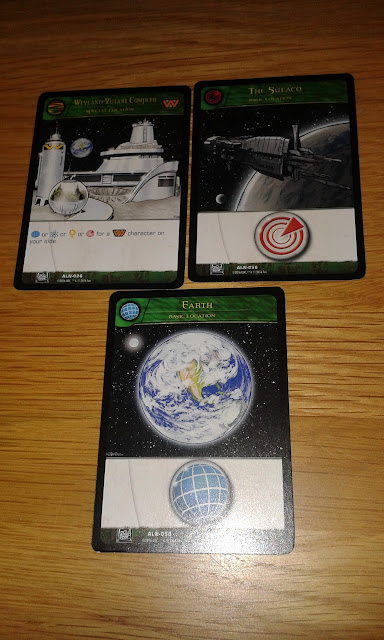 Again some more new locations, the Weyland hq, the sulaco, and Earth.

So is this set good? well i am a big Aliens fan so i LOVE it.  Would you like it if you where a fan of VS in general? of course, its more of the same, but new options, new main characters and new ways to play.  I am already wondering what would happen if Deadpool lead the human strike team, or perhaps Wolverine tearing into Aliens.

Its great artwork, and plenty of variety here too, with 200 cards and the deck size being 60 there is plenty of experimentation you can do straight out of the box with this one.  A must have for VS fnas and Alien fans!


With an RRP of £27.99 head down to your Local Game Store and grab yourself a copy to expand your VS collection, or start it if you are an Aliens fan.