Pandemic has in its time since release in 2007 come to be considered somewhat as a classic, and masterpiece of cooperative gaming.  It has won numerous awards in the gaming industry, and has had several expansions, and versions made of it with the base core set still being hugely popular.

Well, with such a pedigree and string of awards its probably about time I took a look to see what all the fuss is about, and with a theme of fighting disease like the classic film outbreak (I am not being the monkey!) its a theme most people can get behind not being fantasy, sci-fi or something odd, its a relevant, and somewhat scary on occasion prospect if you watch the news with recent outbreaks of Swine Flu, and Ebola, Avian Flu, lots of scary things, so finding people who want to eradicate disease is an easy sell for the non gamer.

Can Pandemic tick all the boxes i want in a game? Well its got the first one.  Later on we shall see if it manages more.

Good theme... check fighting the outbreak feels fun CDC style like Walking Dead or World War Z (yes one strain can be a zombie strain if you want, as you WILL start naming them)

In Pandemic, several virulent diseases have broken out simultaneously all over the world! The players are disease-fighting specialists whose mission is to treat disease hotspots while researching cures for each of four plagues before they get out of hand. 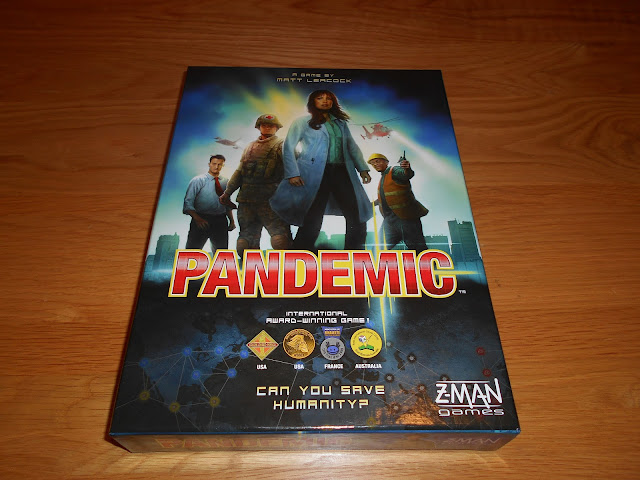 The game board depicts several major population centers on Earth. On each turn, a player can use up to four actions to travel between cities, treat infected populaces, discover a cure, or build a research station. A deck of cards provides the players with these abilities, but sprinkled throughout this deck are Epidemic! cards that accelerate and intensify the diseases' activity. A second, separate deck of cards controls the "normal" spread of the infections.

Taking a unique role within the team, players must plan their strategy to mesh with their specialists' strengths in order to conquer the diseases. For example, the Operations Expert can build research stations which are needed to find cures for the diseases and which allow for greater mobility between cities; the Scientist needs only four cards of a particular disease to cure it instead of the normal five—but the diseases are spreading quickly and time is running out. If one or more diseases spreads beyond recovery or if too much time elapses, the players all lose. If they cure the four diseases, they all win! 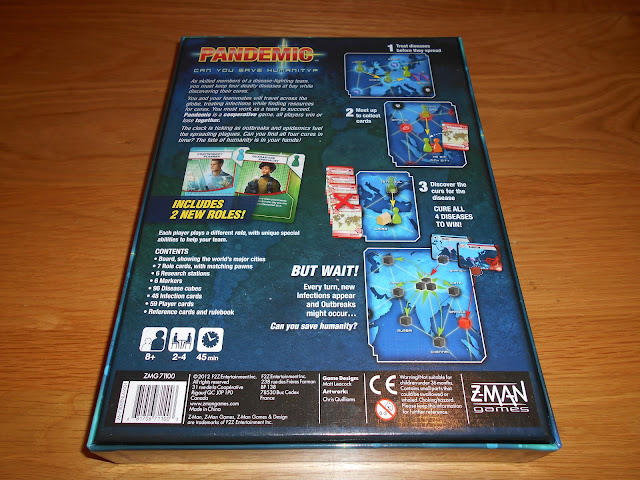 It says ages 8 and up, which is fair i feel, and a time of 45 mins for playing, again about right, sometimes less if you lose horribly, and you will... this game can be brutally hard, but it does have adjustable difficulty, so that's a plus!  players 2-4, again accurate, however,.... this can very very easily be played solo, either running one, or (best option) two characters and running two hands, which since its cooperative you can play face down on the table (even in regular play). That is in self another massive checkpoint, as it plays fantastically solo, and i think they are missing a trick not mentioning it.


So whats inside the box? 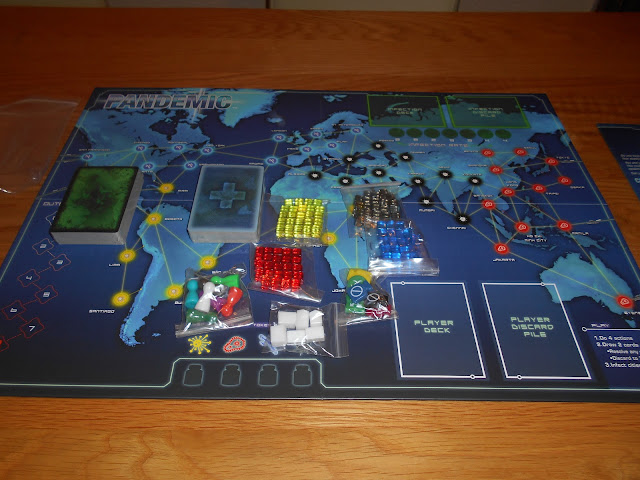 A rulebook, two decks of cards, and bags of tokens, including the clear coloured plastic disease markers (these are cool i love them).  i love the art on the board, it reminds of watching a big planning wall screnen in somewhere like the CDC watchmaking them spread and trying to fight them. 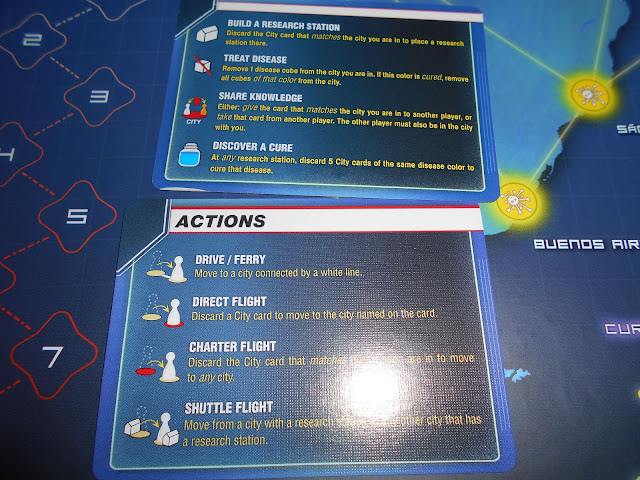 When you open up the cards you will see 4 of these double sided really handy player aid cards.  They tell you the actions you can perform on your turn.  Each turn each player may perform any 4 combinations of the above actions. 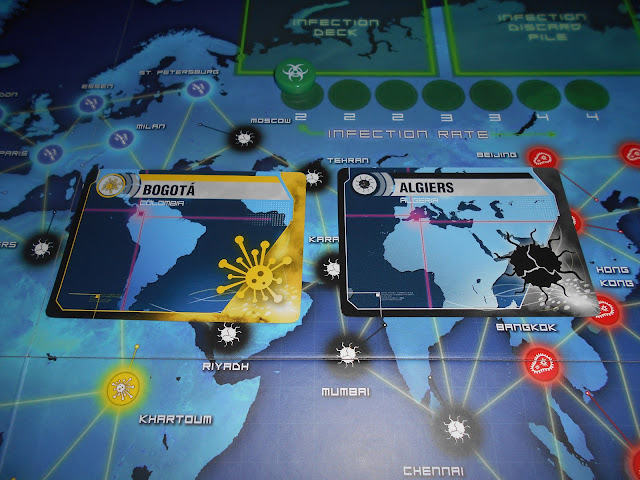 Some examples from the outbreak deck, when you draw these, you place a cube on the infected section. 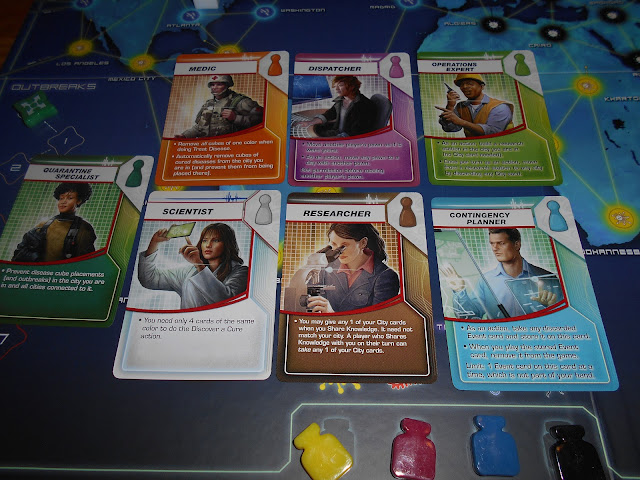 Each of the roles you can be have their own special ability, getting the best out of them is key to winning. 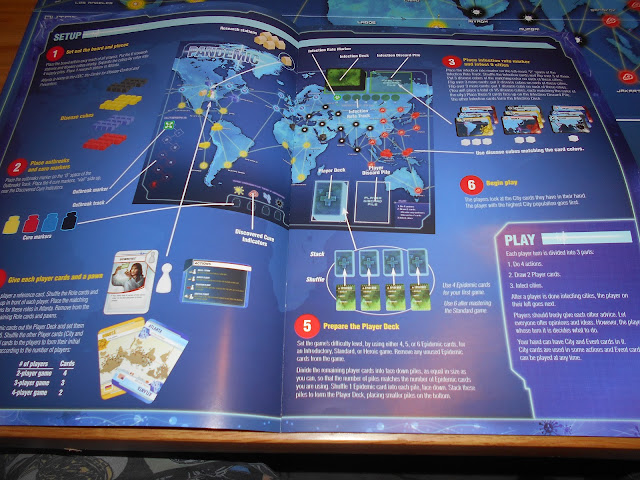 The rulebook is not very large, and IS very easy to follow, it guides you through your first setup, and then you are away saving the world, or not as may be the case! 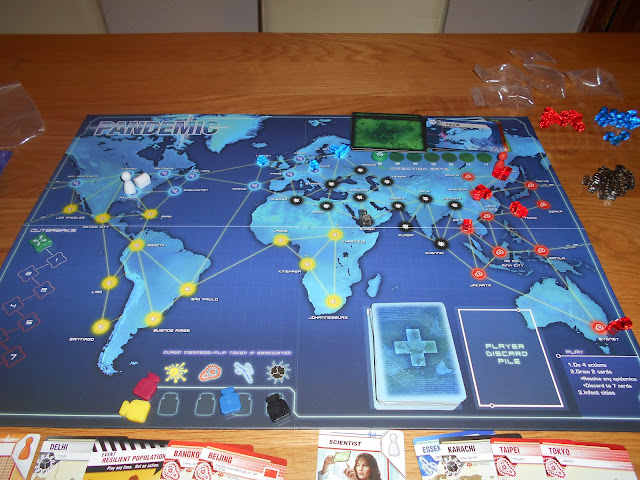 After set up for our first game, you draw cards to see where the infections begin, and it was not looking good in Asia! so me as the medic went heading over to try to eliminate some of the threats, as the last thing you want to happen is to have an outbreak.  Outbreaks happen when you have three cubes already in a location and need to place a fourth, then you move the outbreak tracker up one, reach the end and its game over.  Then you add a cube to every connecting city to the one the outbreak occurred in, if that causes an outbreak at those cities you continue moving the tracker up one more and adding cubes to the cities that connect to those and so on.  You can get some really scary effects as the disease spreads fast. 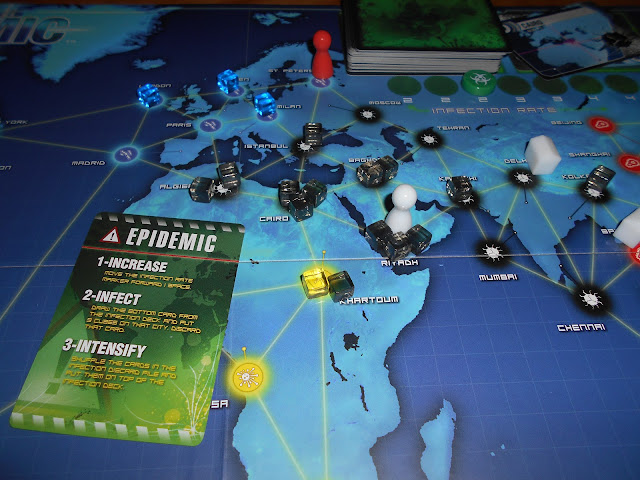 Epidemic cards are in the player deck. As you take 2 cards each turn, you could easily draw one of a number of these, and its where things get nasty, you can see what happened when we got an epidemic card here, most of the middle easy went to near popping point.....  You increase the tracker, so the more of these you pull, the more cards you will need to draw each turn to infect cities, making the game tougher, and the previous cities in the discard pile are put on top of the deck again meaning they can easily get to outbreak level again quickly, so when this card comes up, its all hands to the pumps or should i say the labs. 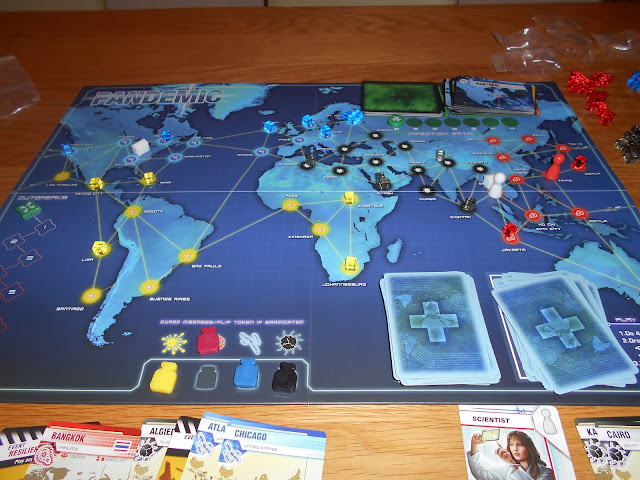 It was tough, but the red disease was cured, though it doesn't stop cubes appearing, it just means for an action you can wipe out all the cubes on a space instead of one, and when they are all gone its eradicated and will not appear again.  You win if all 4 are cured, you do not need to eradicate them, just cure.  It is tough, as you can vary the numbers of epidemic cards in the deck. 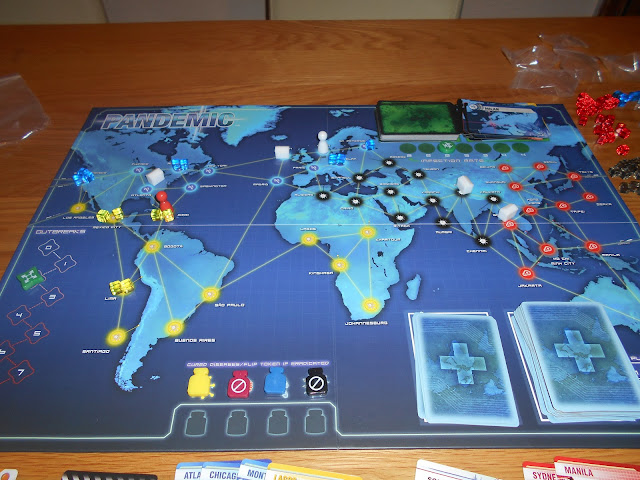 A hard fought victory, just though, with only 4 cards left in the player deck, and with you drawing two each turn this would not have lasted much longer.... Its another way to lose! 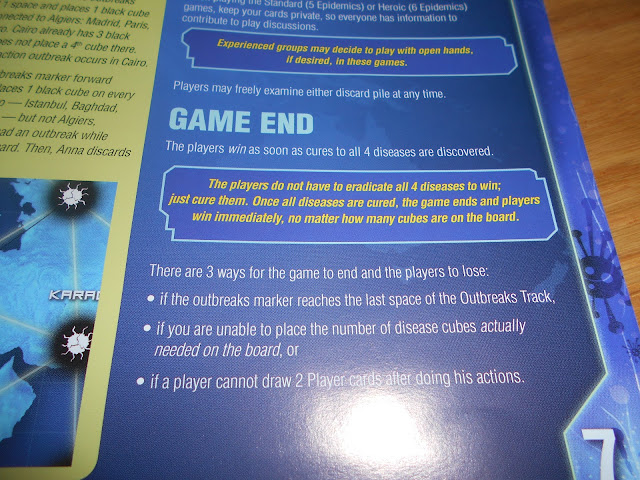 The only way to win is cure all four diseases, but you can lose in 3 different ways, this game is not easy, but it is fun, and you will want to break it out again and try and win straight after.

Its a great game, its simple but with your choice of actions will challenge you, do you move to try an contain diseases? or work at getting to somewhere where you can swap cards to get someone to head to a research center to cure them... You need to make sure that you use your characters to the maximum abilities, to get everyone working together to work on the main goal and win.  Its a challenge, but its epic fun.


Good theme... check fighting the outbreak feels fun CDC style like Walking Dead or World War Z (yes one strain can be a zombie strain if you want, as you WILL start naming them)

Solo Player option ...... work excellently on this, and is so much fun, and of course with the random nature of the spread of the diseases, and the different character classes it will feel different and challenging each time.

Looks Great ...... i love the board and the cubes, in my mind im looking at a large wallmounted display in the CDC watching the spread grow, and ordering the staff (the player characters) to the points to deal with things.... i like the theme, and i love the look it works perfectly.

Easy Set up and Take down .... The game can be broken out quickly, and put away fast, about 5-10 mins of setup, which is great when you compare that to many other games

With an RRP of £36.99 this is a must add to your games collection, so head over to Your local game store

And grab a copy! its excellent, and a fantastic gem for gamers, non gamers, and all ages.
Labels: Z-man games