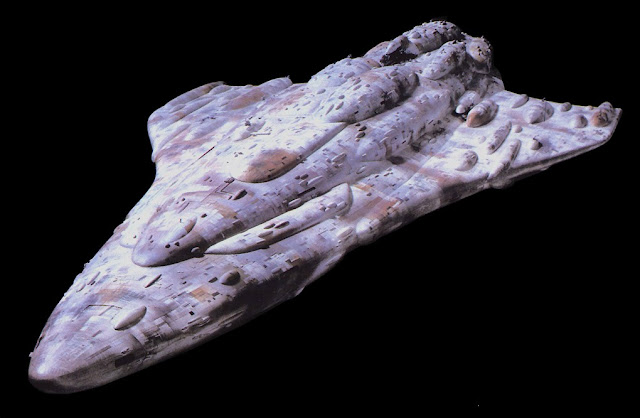 The MC80 Liberty type Star Cruiser is the spearhead of the Rebel Alliance’s fleet, and it boasts some of the heaviest firepower in the Rebel arsenal. Its impressive firepower and powerful forward shielding, demand that it is often among the first ships considered to lead Rebel strike forces into combat. 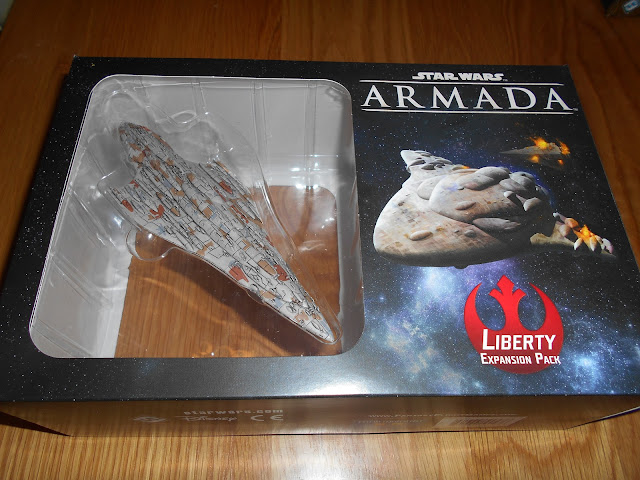 It comes in a typically massive box, but then it is a big ship, and mighty pretty too! 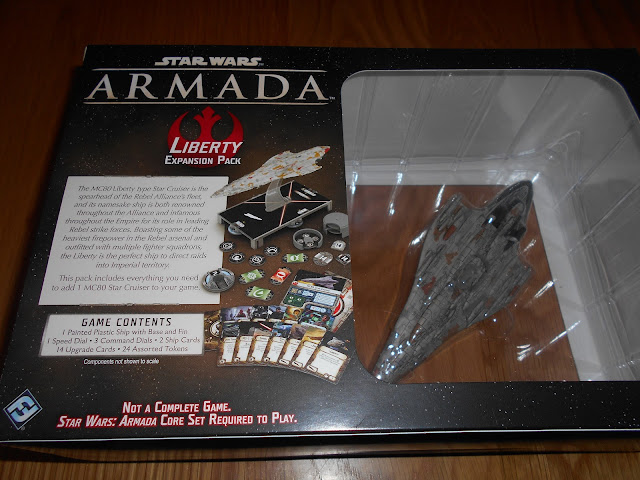 I do like this packagaing, a clear view of the ship, and a nice contents list as well, always welcome.

Right.. lets crack it open and see what we get! 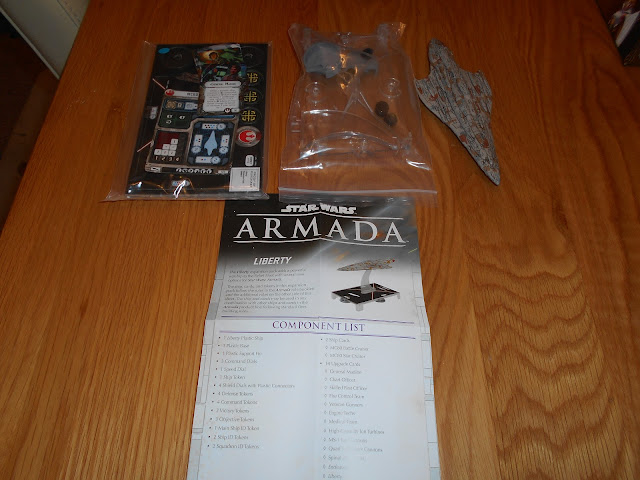 Once you have popped it out of its massive but very protective packaging you are left with a couple of baggies of goodies, and a nice component list sheet to check you have everything. 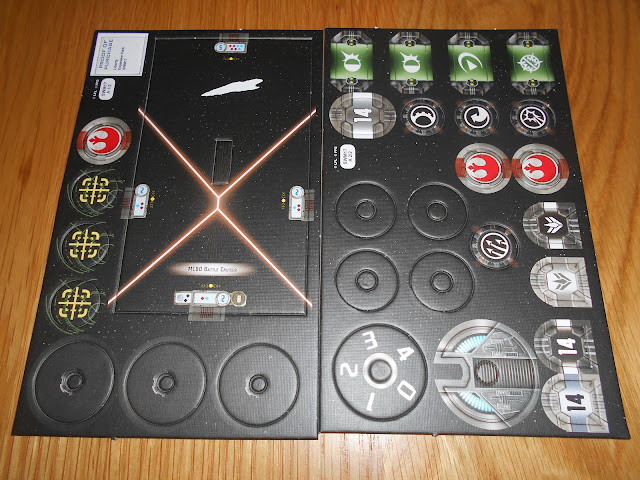 As Always with FFG, plenty of lovely tokens, all you need to play.  You can see she is a heavy hitter, with a wide front arc throwing out 7 dice with a good mix of long and medium range firepower. 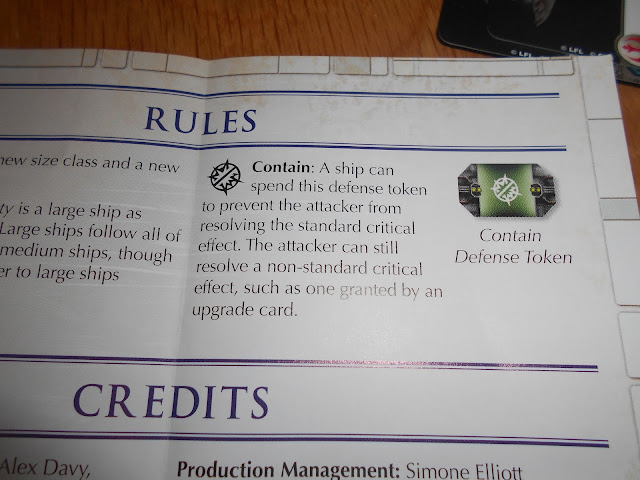 Being a large bae ship she gets some new rules, the Contain defense token.  This can be spent to stop standard critical effect, so is useful to minimize damage. 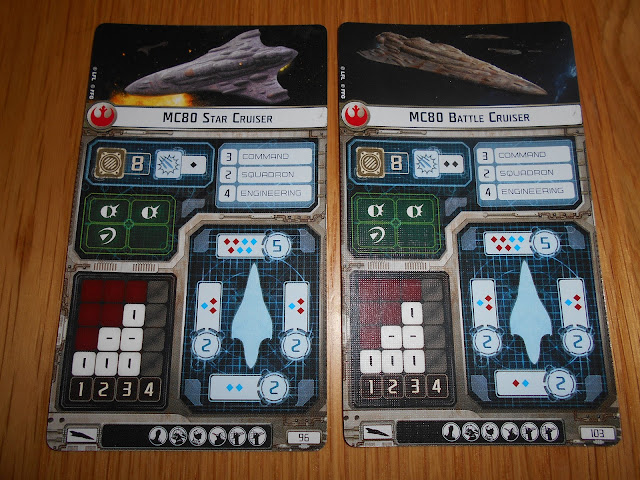 We get two versions, the Star cruiser, and the Battle Cruiser.  The Battle Cruiser provides more long range firepower, and better anti squadron firepower, though of course costs more.  Both versions have 8 hull and 5 front shields, so can take a beating, and since most of the firepower is front facing, you want her pointing her nose at trouble.  She is not the most nimble ship out there, but pretty fast for her size, able to outrun the Victory class Star Destroyers of the Empire.  And there are plenty of upgrade slots to trick her out in any way you may fancy. 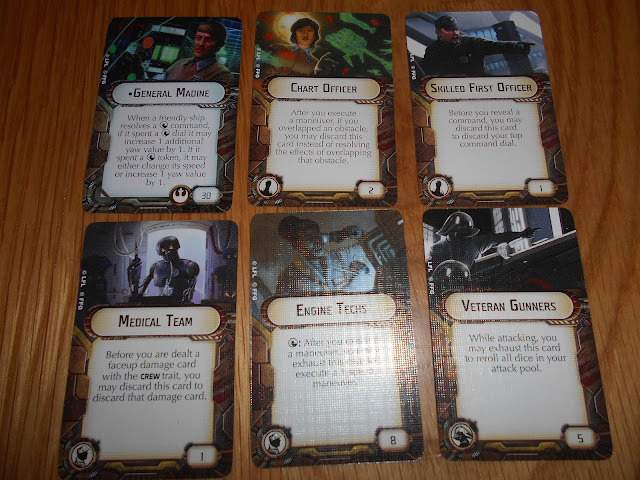 Lets take a look at the upgrades we get.  General Madine provides a new rebel admiral option, and remember you must always always take an admiral.His ability helps with your maneuvering by allowing ships that resolve a navigate command to get an additional yaw, or if they use a token, it can either change its speed or yaw by 1.  Very handy with such a hulking ship, but when you combine this as the center of your line, and add in nimble ships like corvettes and nebulon Bs, they are now going to be so hard to catch.

Chart Officer can be discarded if you overlap an obstacle instead of taking the effects of it, i imagine they are so ashamed of their poor navigation they throw themselves out of the airlock!

Skilled first officer (should that be William T Riker? ooopps wrong universe)  He can be discarded before you reveal a command letting you scrap the top dial, handy if you know it will be of no use to you, and for only 1 point, its not bad value.

Medical Team lets you discard it to avoid taking the effects of a faceup damage card with the crew trait on it, keeping your crews alive longer.

Engine Techs, very useful on this ship as it lets you exhaust them for an extra 1 speed maneuver, and when you get that 1 click of yaw, its well worth it to get this lumbering beast where you need her, which should be pouting all her guns at the enemy.

Veteran Gunners is a useful card on this ship, as you can exhaust them to re-roll all your attack dice, and when you are chucking out this many, you want an option in case of a really poor roll, i know, it happens to me all too frequently! i roll a handful thinking i will crush my enemy, and it seems someone has turned down my laser batteries to defrost level.... yeah.... this can help with that. 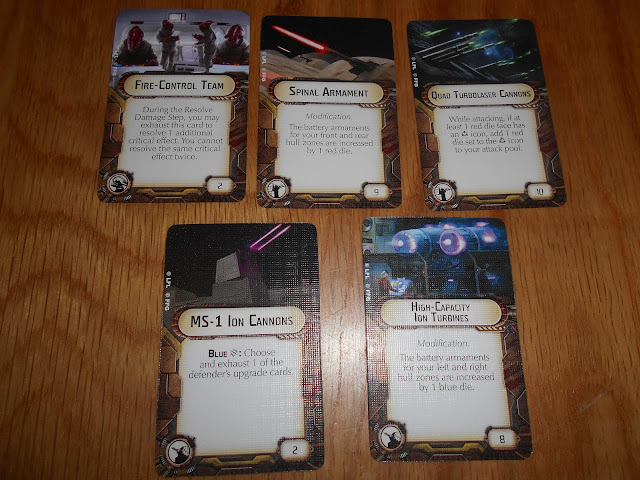 Fire Control Team can help you by allowing you to add another critical effect, and when you are hitting this hard, its a great option!

Spinal Armament is a must for me, as who doesn't want more firepower for their ship, and this adds a red dice to the front and rear fire arcs, more dice, more potential damage, and with the fire control team to do more criticals.... yes please.

Quad turbo laser turrets helps if you roll an accuracy on one of your red dice by allowing you to then add another red accuracy symbol, which again works really well with the previous two upgrades causing plenty of firepower and damage to be distributed.

MS-1 Ion cannons work with the blue critical effect, and lets you choose and exhaust a defenders upgrade cards, make sure its one they could use to mitigate damage.

High Capacity Ion Turbines are another must have for as they increase your left and right batteries by one blue dice bringing them up to 4 dice, so its well worth it for extra damage potential. 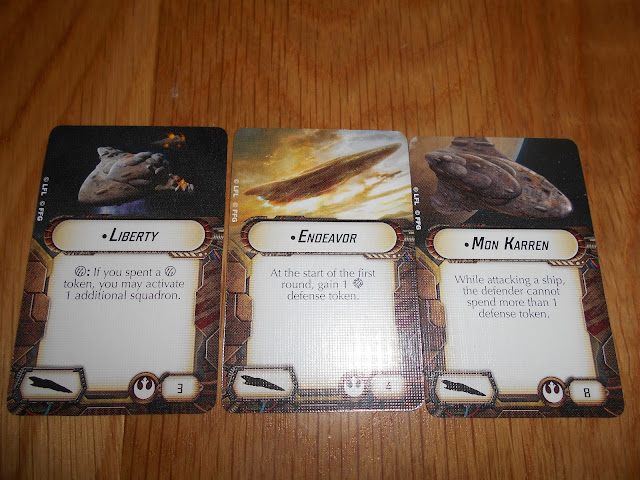 The ship comes with 3 titles to chose from, with varying costs, and different abilities to help you tailor your ship to your own playstyle.  Do you like getting more squadrons moved per activation? then Liberty is your bag!  Endeavor  gives you an extra defense token at the start of the game making you more survivable, and my favourite Mon Karren only allows your enemy to use one defense token per attack meaning you can slam more damage through. 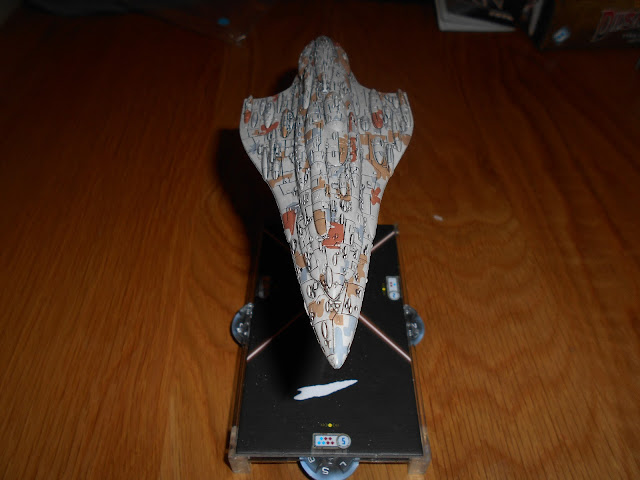 The ship herself is huge! and imposing on her large base. 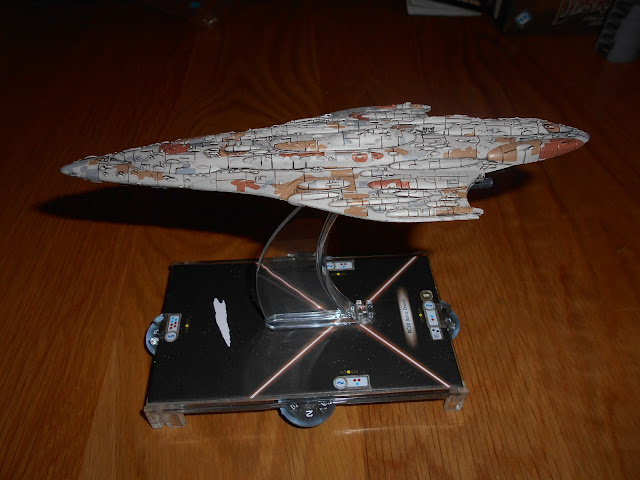 The level of detail is excellent, and the paint job is perfect, its a real center piece model 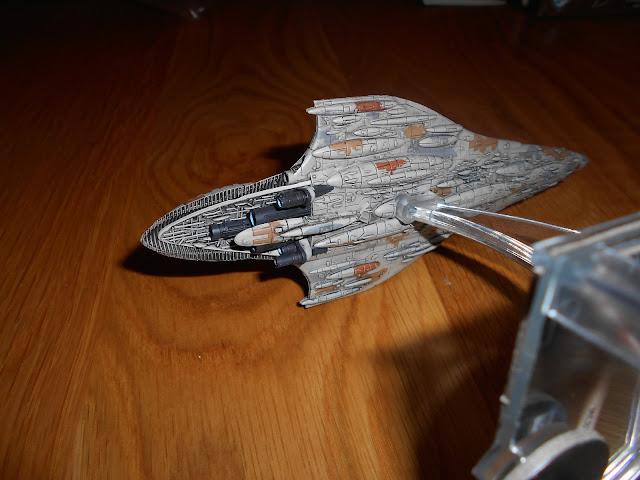 Even the details on the underside and engine glow are excellent. 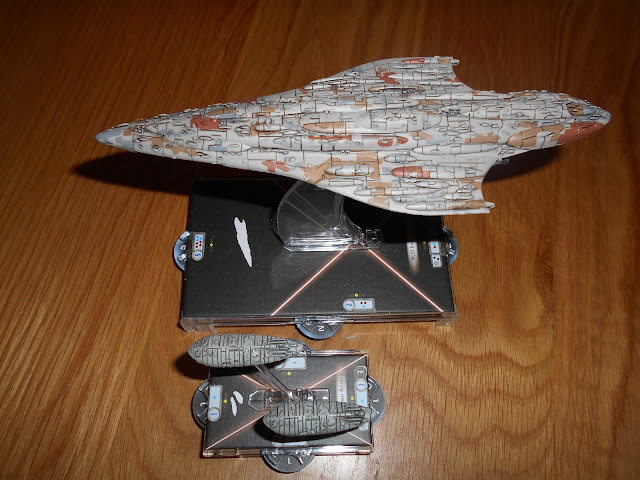 Compared to the rebel transports she is a beast compared in size to them, as she should.  Its a great looking model, with some excellent upgrades and a certain must have for your Rebel fleet as it gives you a true solid anchor that you can then have lighter ships whirling around whilst knowing she can take a beating, and give one too!  Certainly a threat your opponent can not ignore.  And of course, she just looks great!!! would be perfect even sat on a shelf he model is that good.


Coming in with an RRP of £36.99 this will add a whole new way to think about your battles with the ability to match firepower with other Imperial ships, and take a berating back you can use her in many ways.