We had great fun playing Flick Em Up which is an excellent Western themed dexterity game, so when I heard there where actually expansions for it, it was certainly something I really wanted to see, and by "I"  of course I mean Olivia and me, as she is a big fan of the main game, and loves nothing better then knocking out my outlaws.

So what does this expansion bring??

The infamous Cooper clan has begun taking over small villages. Those villages, however, belong to the Native Americans who are armed with bows and tomahawks and ready to defend their land in five exciting scenarios in Flick 'em Up!: Red Rock Tomahawk.
But they best be careful around the Cooper clan's new weapon: the relentless Gatling gun... 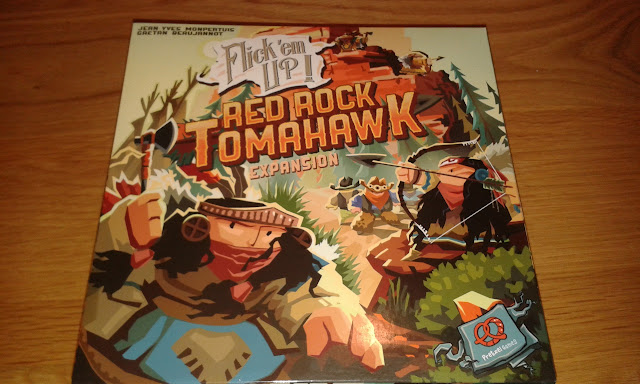 The box is small but colourful, with the the same style of art you will be used to from Flick 'Em Up. 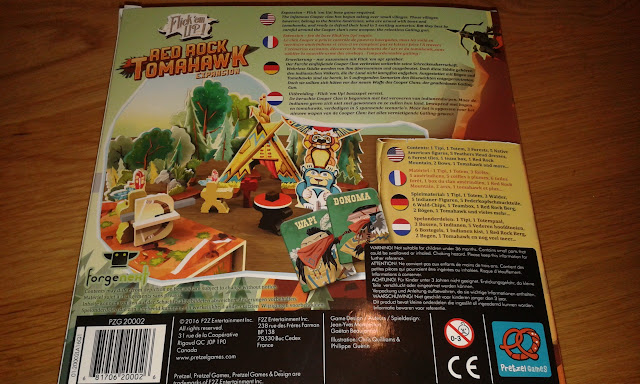 The back again gives you a little run down of what you can get, and some nice pictures of it in action, and it does tell you you need the base game to play.  What I did not know though, as this is wood, and i have the plastic main version.  It does not really effect things massively, as the wood is good quality and solid, and not really any noticeable weight difference, but it is something to be aware of if you want your whole collection to match, as i know it matters to some people.  Me? im not even worried if my socks match......

So whats in this little but hefty box then? 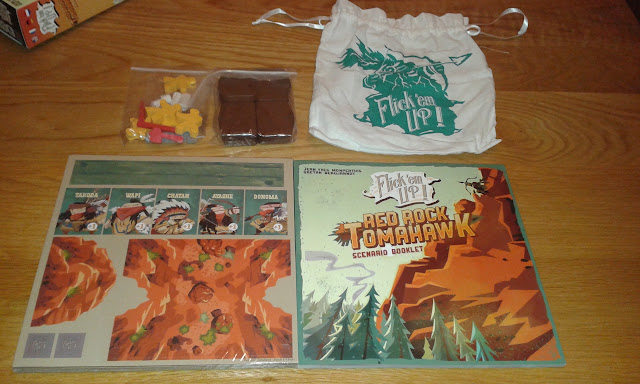 A funky baggie, some wooden meeples and terrain stands, some card punchouts and a huge manual that provides most of the weight. 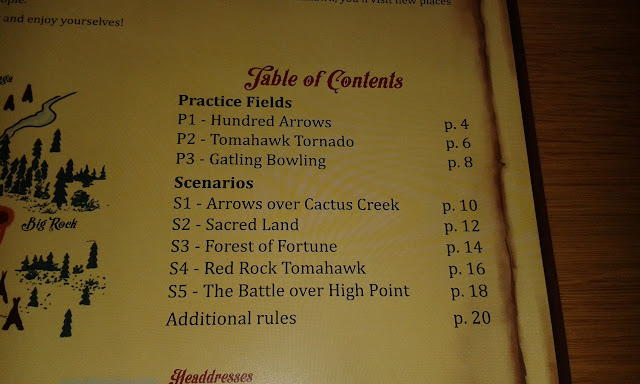 You get a set of Practice fields, which are basically ways to practice the new weapons and items, or just have a great bit of fun shooting things down!

Then you get 5 brand new scenarios, always a big fan of missions here so im really pleased to see them, and like the original they lead you through the new items gently so you never feel overwhelmed.  You will need the Outlaws from the original set for these missions so do make sure you have the base game. 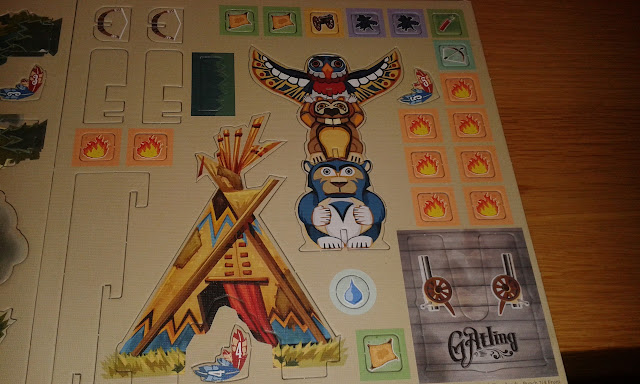 The art for the punch out buildings and terrain lovely, and full of character for the cartooned old west the game.  Also plenty of things like fire tokens, Yes you can use fire arrows to set buildings aflame, and the Gatling gun... that thing is FUN!! 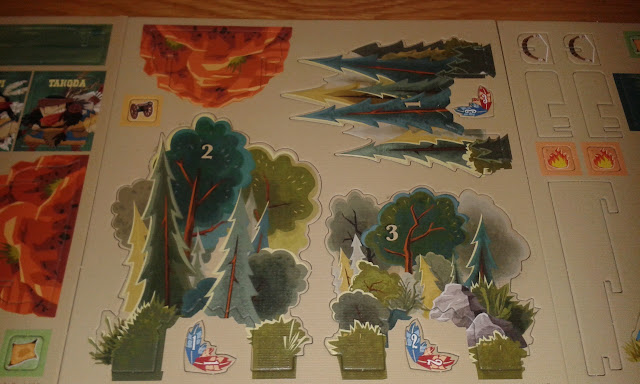 The terrain lovely, and though meant to be used in the scenarios in the accompanying book, can of course be used with the main game to create larger environments for your own fun to play in, and that is something i really like, the game plays great with scenarios, but if you just want to throw down and create your own, then why not! its an excellent sandbox of a game. 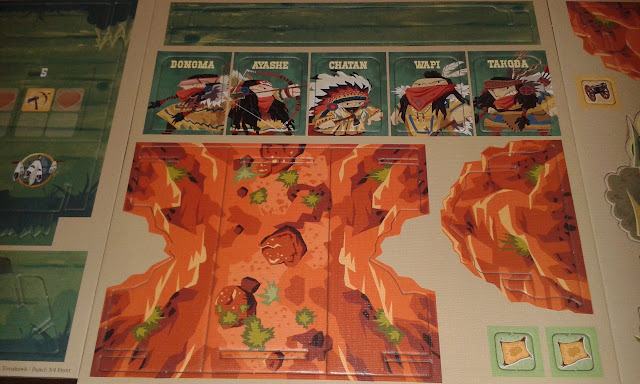 You get the native American tokens as well, and a board for them to go in, this is something i believe came in the wooden set only, but it is quite nice. 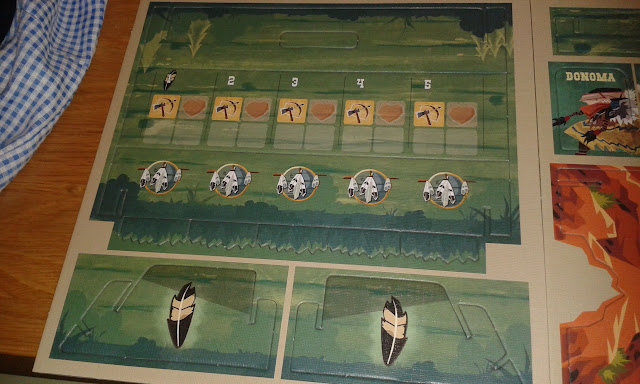 Once you have punched out all your tokens you will have a great looking battlefield, and each scenario will tell you where to place them. 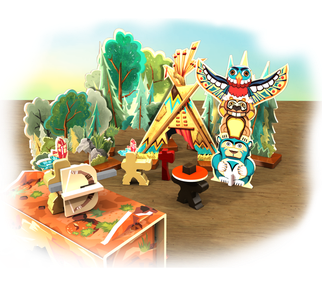 It looks awesome once its all set up too, and you watch it come alive in your mind and on the table 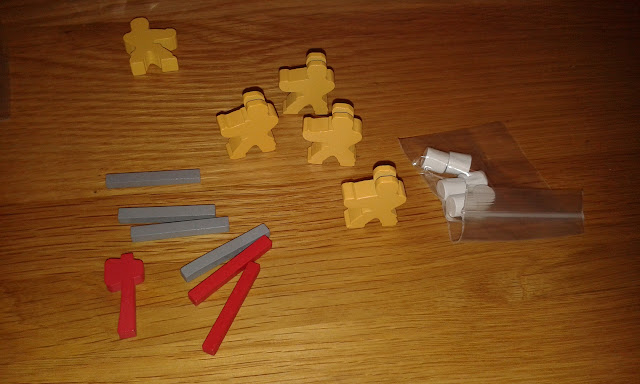 For wooden pieces you get the 5 Native Americans, grey "normal2 arrows, and red Fire arrows, plus the Tomahawk too which is a big old best to flick at your opposition. 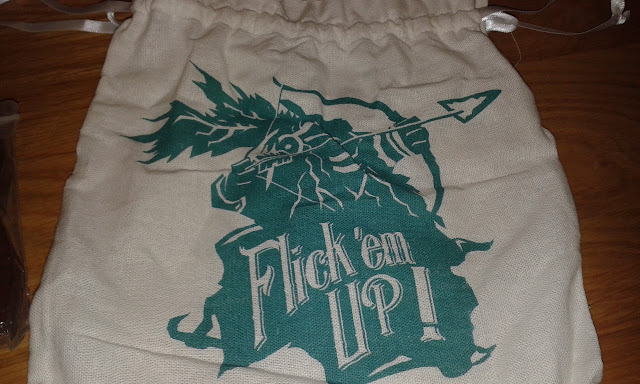 Then you get this rather funky Flick em up bag to put all your goodies in when you have finished with them, a really nice little touch that i like, and needed too since there is not enough storage in the normal plastic version i have to fit these in. 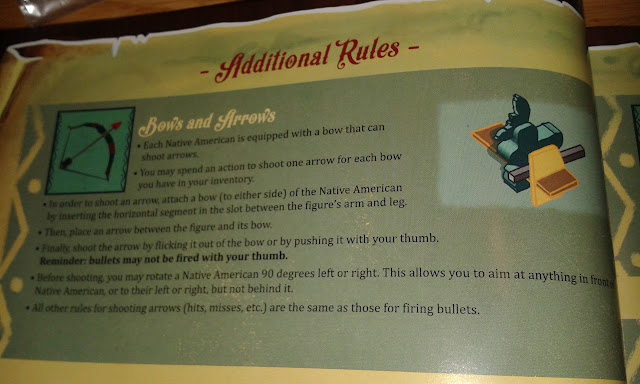 The book gives a great description of how the new weapons work, the Bow is quite a challenge, but due to the way it hits, chances are you are knocking someone down! Being Bow armed also gives you a better field of fire as you are allowed to rotate before firing 90 degrees left or right.  It took a while to get used to, but when we did it was great fun, and  of course you have the practice fields to hone up on your archery.  The Bow was Olivia's favourite new weapon. 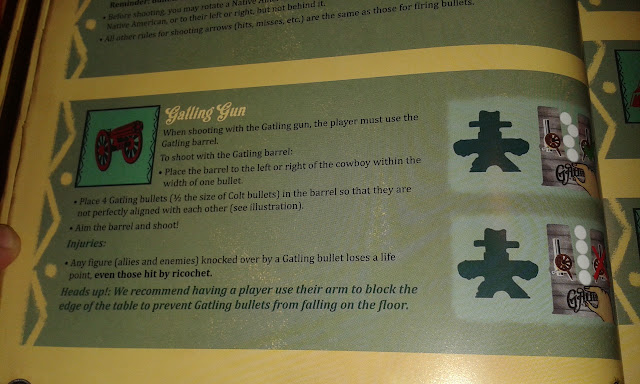 My favourite new weapon was the Gatling gun...... we have used template style flick weapons to help you aim like the Winchester rifle before, but theis one is a bit more..... challenging.  The "barrel" you load the bullets into is not a close fit, its lose and meant to be, and you load it slightly staggered, then fire it with one almighty flick flinging bullets at your foe, (these are smaller then the normal bullets in the game) and even ricochets cause a wound. This was a beast, and hilarious fun to fire, yes we did have to go hunting for the bullets a couple of times, but it was well worth it!

All in all i like what they have done to expand and provide something new to the game, new scenarios, new weapons that need practice to master, and new terrain for the sandbox mode too.  My only "issue" is some people may not like mixing the wood and plastic versions, so maybe a marking on the box would have helped.

Shooting the bow is my favourite, its hard, but i am really good at it now after practice, i like the game, its fun, and it adds more things i can use to kill dads outlaws.


With an RRP of £32.99 its more pricey then the plastic base game, but will add a lot more, so is more then well worth getting to add to your collection for new scenarios and more toys for the sandbox, and the contents certainly make it feel different enough to warrant.  Grab your six shooter, or bow and head on over to find your local game store  And grab yourself a copy, you wont regret it.