Growing up I always loved the Indiana Jones Films, and archeology, and dreamed of finding some hidden temple, or ruin.  When i got older i realised it wasn't quite the same, and getting excited over a post hole, or fire pit was not quite the same.  There has though always been that desire for exploration though, and it seems now i can attempt to get that feeling on the tabletop. 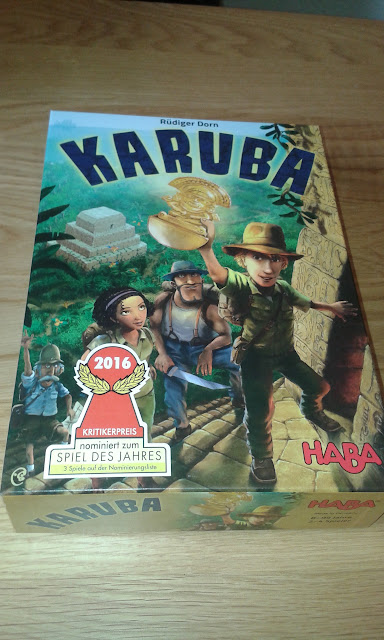 This is a tile-laying race game with players starting with boards that are identical, and one player drawing tiles that they all will use. They race to get their explorers to temples first and earn points. Along the way they can collect additional points by collecting items on the paths they create. 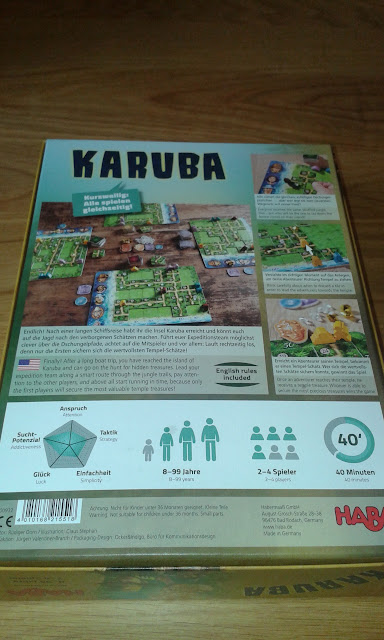 Its a game suitable for 2-4 players, around 40 minute playtime, though we have had it less, but that's mainly playing 2 player so it may well increase, but it never feels like it has outstayed its welcome.  It recommends ages 8 and up, but Olivia (7) had no issues with it at all, as there really is no heavy reading, or any at all needed, just number recognition, and logic.

Description from the English Ruleset:

Many moons have come and gone since your boats departed on the journey to Karuba. Once you arrive on the island, each player will lead an expedition team of four adventurers. Now you just have to navigate your way through the dense jungle to make it to the temples. „Just“ may be something of an understatement; the ancient jungle trails have to be found and uncovered first! Hurry up and be the first to reach the temples to collect the most valuable treasures. Many paths have dead ends and you need to be patient to find the right/best way (through the jungle). Look! A gold nugget! You can pick it up and collect it, same applies to the shiny crystals along the paths. 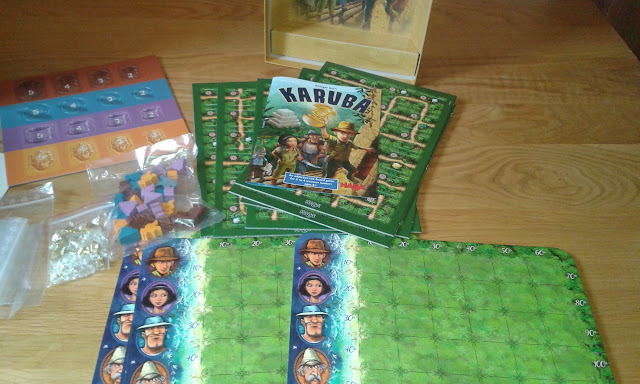 Its a wealth of Tokens, game boards wooden pieces and some nice plastic ones too.  you willneed to punch out all of the tiles, but make sure you do not mix them up (though they are colour coded on the back to keep sets together)  You can also the points markers for the temples, that match the colours.  The first player to reach the corresponding temple takes the higest point value, 2nd player 2nd higest and so on. 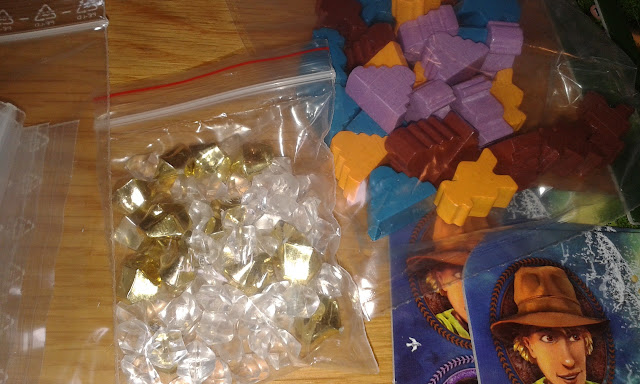 The components are really nice and flavourful, with little gems and gold nuggets to find along the way. 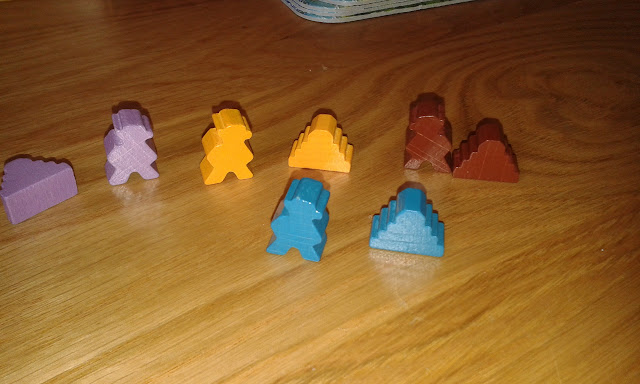 The explorer and temple pieces are all nice wooden pieces. Each player gets a set of all four colours for temples and Explorers. 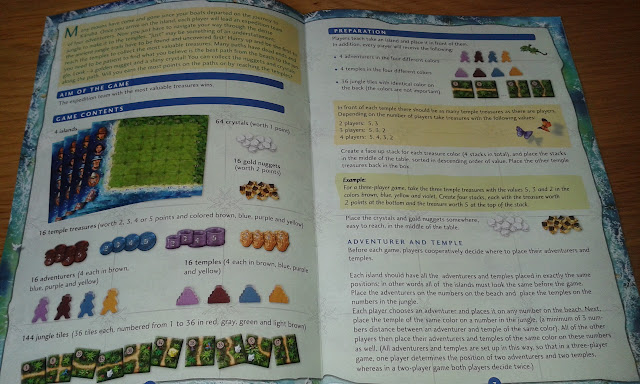 The Rules book is nice, simple and full colour, you will spend more time punching out the tokens then learning this game 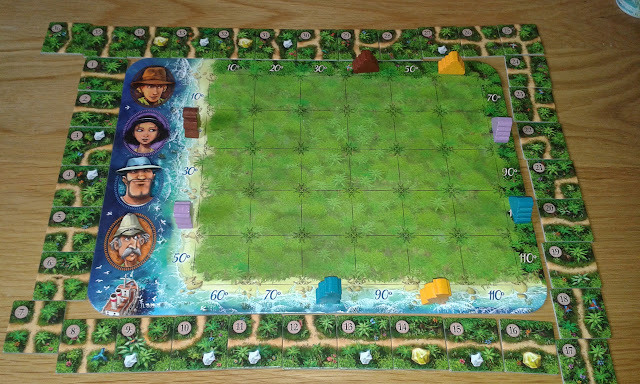 To Set up the game, all the players take their numbered tiles, and all but one set them up around their board.  Then take it turns setting up a temple and explorer.  Each board will look the same after set up so everyone has their pieces in the same place, but of course the place can vary from game to game.

The player who did not spread their tiles out has them shuffled and in a stack.  They then draw a random tile, and speak the number aloud.  then every other player finds the corresponding numbered tile and plays it wherever they chose, looking to try and build routes to their temples for the matching explorer to follow 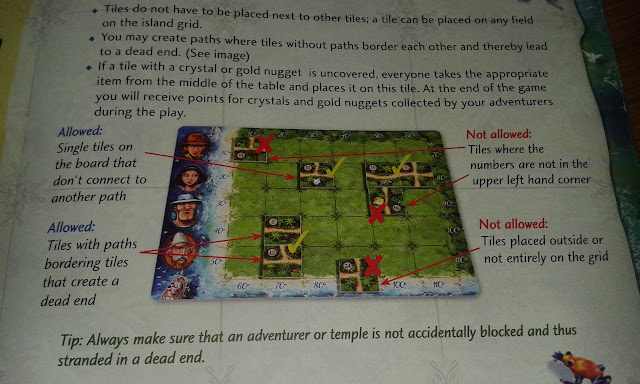 Its really simply laid out in the book, the only rule is the number must be in the top left hand corner, otherwise dead ends are fine. 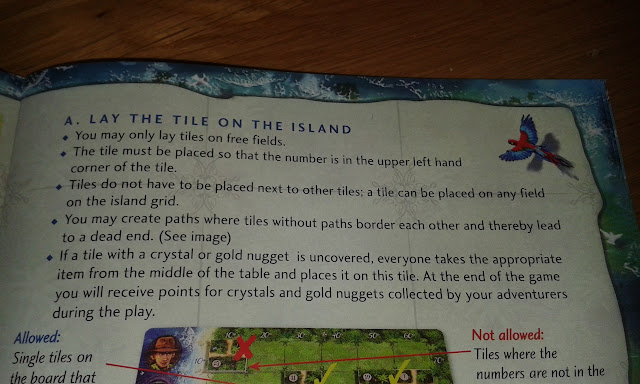 If any symbols on the tile have gold or gems, you place the tokens on them, and thesed can then be collected by your explorer for points. 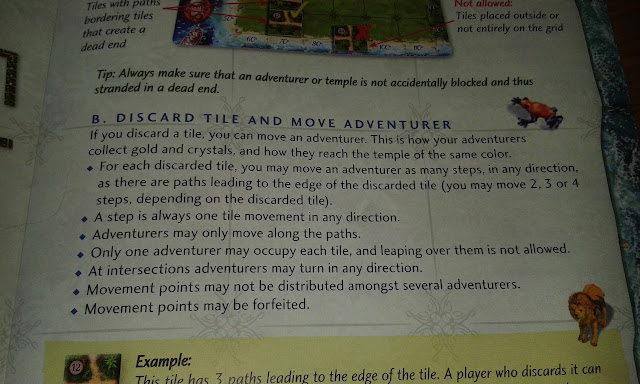 If you do not want to lay the tile, you can discard it for movement, you can move any number of explorers as many as there are exits on the tile, so for example a t-junction has 3 exits, so you could move one explorer 3 tiles, or 3 one, or 1 2 spaces and so on. This starts to lead to the thinking ahead part, of do i try to build the path then move? or do i move and build keeping close to the end of the path i have chosen? Since everyone makes their own decision here its where the boards start to get wildly different from everyone as they place tiles in different places, some discard one others may play it, there is no right way, just the best way you think to win. 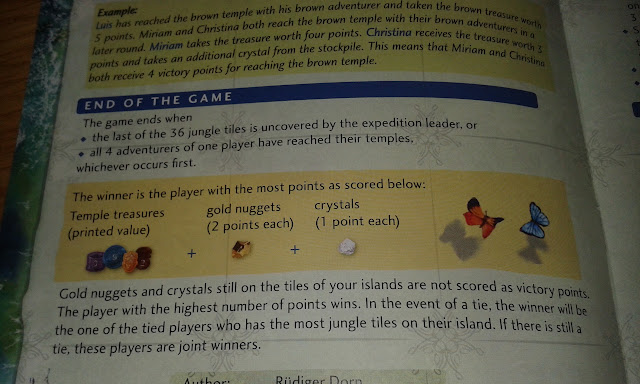 The game ends when either all one players adventurers have reached their corresponding temple, or the last tile is revealed and played, then its tallying up the points for the win. 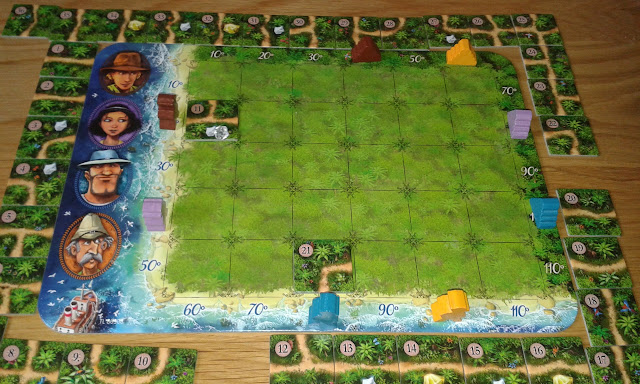 I love the choices available in this game, trying to plan your route and make the best out out of a tile that may not help you is quite the challenge. 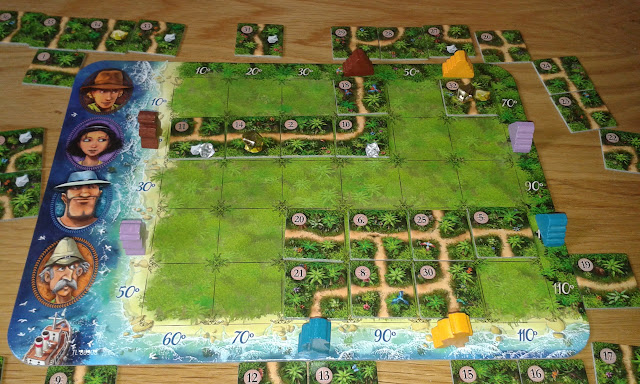 paths open up, and gems and crystals are placed ready for grabbing. 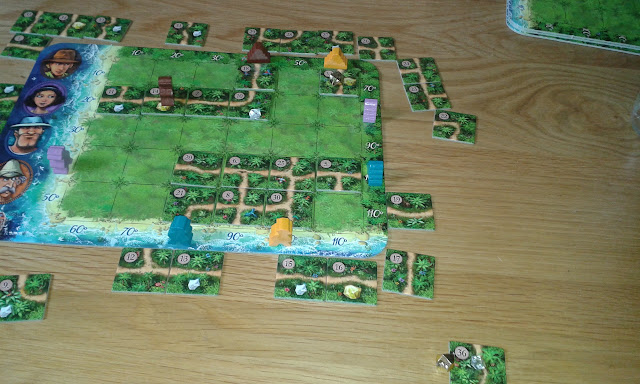 do you move your player to get the points? or wait to build the best routes? its always hard to decide. 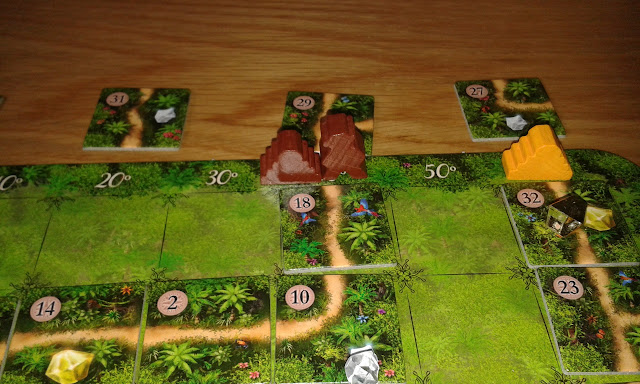 My first explorer made it to the temple, so that's some points for me, as i was the first at the coloured temple!

Its a simple game in concept, really easy to teach, really easy to play, and it looks good on the table too.  Im a big fan of tile games as it helps makes things simple, and looks great whilst playing.  Its a nice simple ruleset, easy to play and teach, but with plenty of depth of decision, which will keep the replay value nice and high.  I have not come across and Haba games before, but going on this one, im impressed, its nice art, good quality components, and a fun little game thats suitable for all ages and casual gamers as well as more "hardcore" gamers.

get in touch with your local game store and see if they can pick you up a copy of it.