Keeping up our look at the latest Xwing ships we get another star of the new Rogue One movie for the Rebels, the U-Wing. 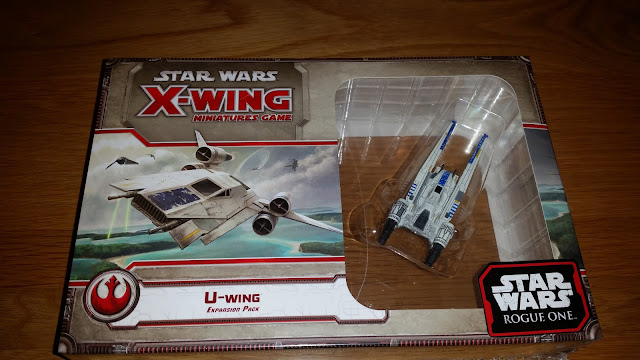 The Rebel Alliance used the U-wing to deploy troops under the cover of darkness or into the midst of dangerous situations. You can use the U-wing Expansion Pack for X-Wing™ to transport Jyn Erso and the other heroes of Rogue One: A Star Wars Story straight to your tabletop. It features one highly detailed and pre-painted miniature U-wing with articulated wings that can pivot back and forth, along with four ship cards and fourteen upgrades. Conduct espionage. Promote Rebel bravery. Pivot your ship’s wings to real effect. The U-wing Expansion Pack makes it all possible.

Lets pop it open and take a look inside..... 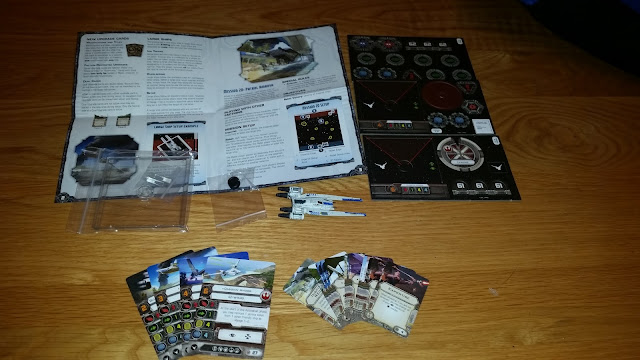 As standard with a ship from FFG it comes with all the goodies you will need, and a mission as the bigger box ships do, if only ALL ships came with a mission.... 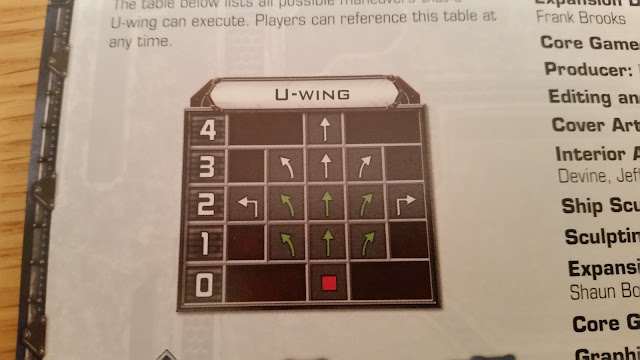 You can see from her dial she's pretty zippy, with lots of green, no Kturn though, but she does have a nice trick.... the red 0 move... she can just hang and not move for the cost of a stress though, but it can let enemy ships overshoot you allowing you some more tactical options. 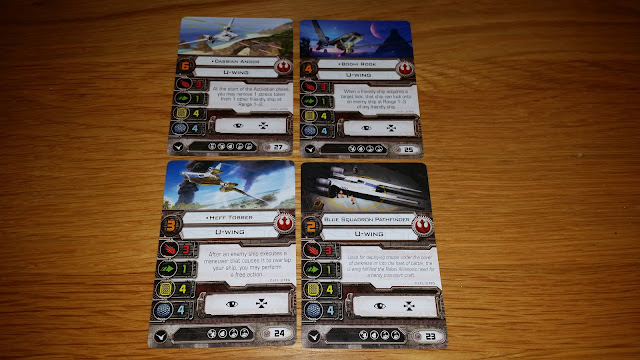 We get the choice of 4 pilots with the ship.  ~The ship herself ranges in cost from 27 down to 23, and has some respectable stats.... 3 attack, 1 evade, 4 hull and shield.  she isn't Falcon levels of tough, but then she's not falcon levels of points either.

Cassian Andor is our highest skilled pilot at skill 6, and his ability can help to strip stress from your force by allowing you remove a stress from a friendly ship at range 1-2 at the start of the phase, potentially causing some surprises, letting your ship that was stressed pull a move your enemy did not expect.

Bodhi Rook is skill 4, and he again helps other ships when they acquire a target lock, by allowing them to gain a lock on anything in range of 1-3 of this ship instead of theirs, which can be pretty handy, and again a nasty surprise.

Heff Tobber is skill 3, and his ability is again passive, and works when an enemy ship would overlap yours.  Youi can then perform a free action, handy if you just pulled that 0 move and an enemy ship clatters into you.

Lastly the Blue Squadron Pathfinder is our generic skill2 pilot. 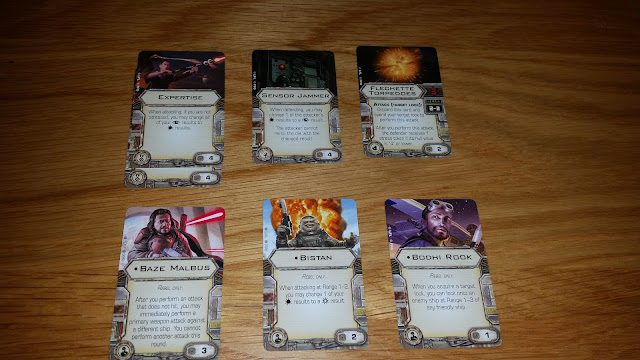 The upgrades is where this ship really shines, there are so many slots on the ship you can really tool her to do exactly the job you need, there are tons of upgrades in this pack, let alone all the others you have already acquired, so tailoring her to the right job should be a breeze.

Expertise is an elite talent, and its great! When attacking if you are not stressed you can turn all your focus results on the die into hits... that's basically a free focus action..... cant argue with that, it will really help get great action economy in ships.. I'm already wondering about it on vader......

Baze Malbus is a rebel only crew, that if you perform an attack that doesn't hit, lets you attack a different target again.  Very useful, certainly if there are plenty in range.

sensor jammer helps out with defence by letting you convert a hit back into a focus when your enemy attacks, and they are unable to reroll that die either.

Flechette torpedoes is an older card, but still useful, does damage, and adds stress to your target so well worth taking.

Bodhi Rook lets you lock onto a ship at range 1-3 of any friendly ship, so increases your range of target lock nicely.

Bistan is a rebel only crew, that lets you convert a hit into a crit when attacking at range 1-2.  Combined with expertise.. very nasty! 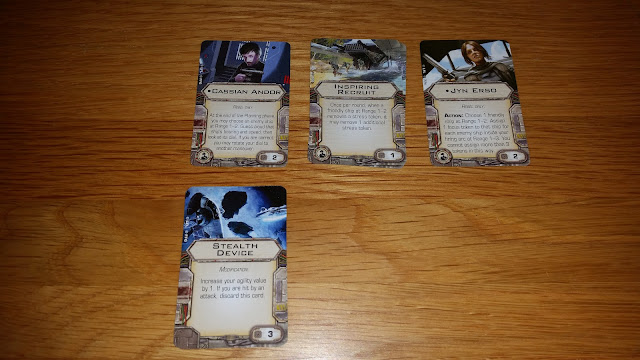 Then we have Cassian Andor... his ability seems odd at first, as you wont always get benefit, but.... it has uses...  So at the end of the planning phase, you can choose an enemy ship at range 1-2 and declare what move you think it will make. Then look at its dial.  If you are correct, you can then change your dial.  If you are not correct you cannot, but you have still seen where they will be moving for that turn.

Stealth Device is a modification, it adds an extra agility, and this ship only has 1, so its very handy, but as soon as you are it you lose the device.

Inspiring recruits helps strip stress tokens off, by letting a friendly ship that removes a stress in range 1-2 to remove one more than normal.

Jyn Erso is a rebel only crew option that lets you as an action, choose a friendly ship at range 1-2 and assign a focus token to it for each enemy inside your firing arc. 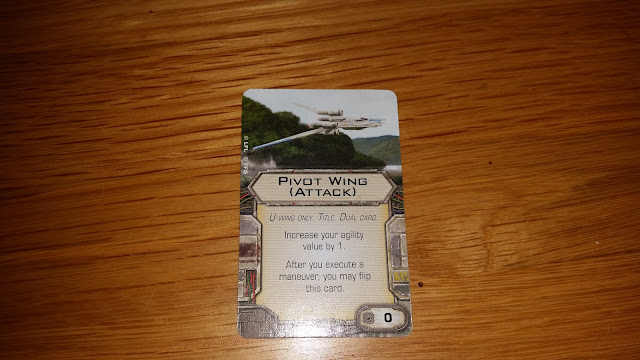 Then lastly we have the uwings party trick... the double sided pivot wing card.   Its a 0 cost title so optional, but I do not know why you would ever not take it.

In Attack mode, it increases your agility by 1, which is a nice boost for the ship.  After you have moved you may flip it over... it is optional though to..... 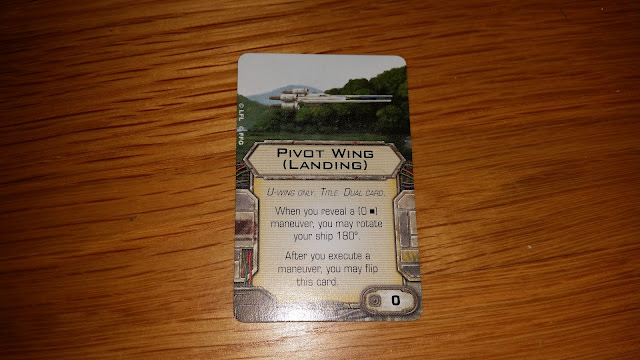 Landing mode..... Which after you reveal a 0 move, you can rotate the ship 180 degrees and then flip it over again if you wish after a manoeuvre.

This card allows for a huge amount of options to play with, though you will need to think ahead about when its best to have landing mode, or attack mode.  But that is going to be part of the fun of learning the ship. 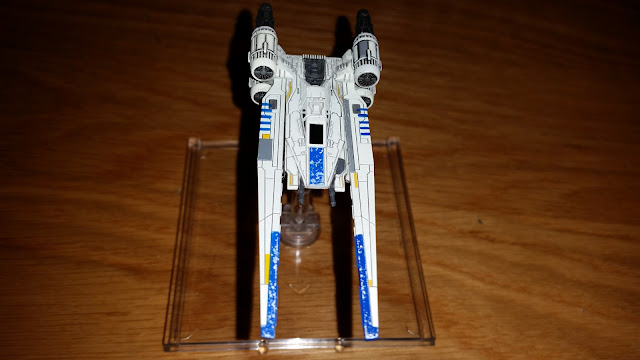 The ship itself is stunning, one of the nicest ones I have seen, and it also reminds me nicely of Buck Rogers too! 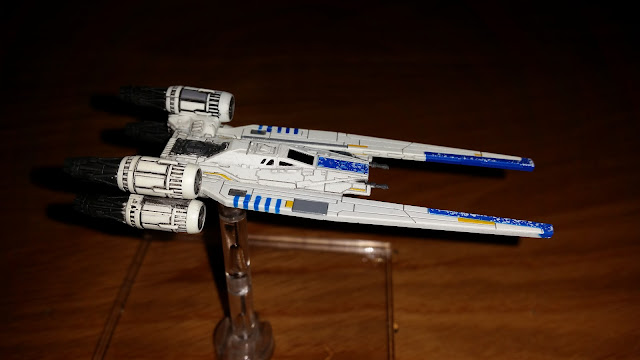 From all angles its great looking, and of course it has actual pivot wings...... 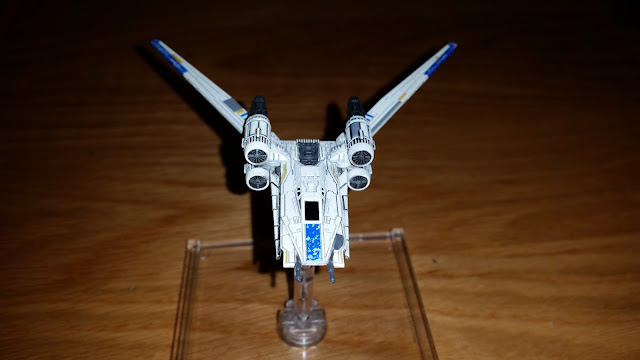 In attack mode she really looks the business, sleek and fast with hefty guns up front. 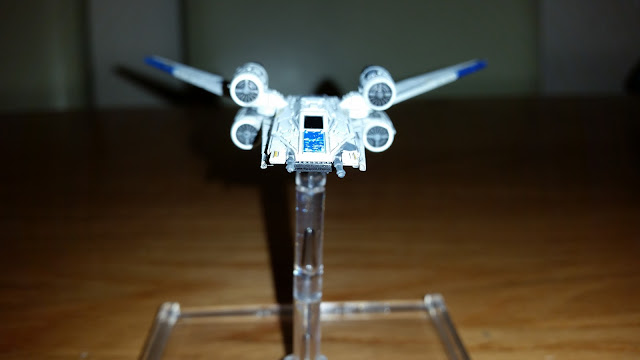 Its a really excellent pack, a great TIE in (see what I did there) with Rogue One, and an incredibly versatile ship that can be pretty much kitted out to fulfill any role you need in your force, and she is still solid whilst packing a punch too.

With an RRP of £27.99 you get a ship that's really going to provide some new options for flying styles, and she hits hard too, along with a good fun mission, so head on over to your local game store and grab yourself a pack.

Come and join us in all sorts of gaming chat in our Facebook group here, and come follow us on Twitter @rollyoursix and Instagram join the chat, and tell us about your games!
Labels: Fantasy Flight Games Xwing