I have only personally come across one other game from Daily Magic Games, and that was Mana Surge which though an interesting idea, had some problems, such as poor manual, making it a challenge to learn, and some on occasion stunning, on occasion downright awful art.  Now taking a look at Quests of Valeria.. will it be different?  Its a different type of game for sure so lets take a look. 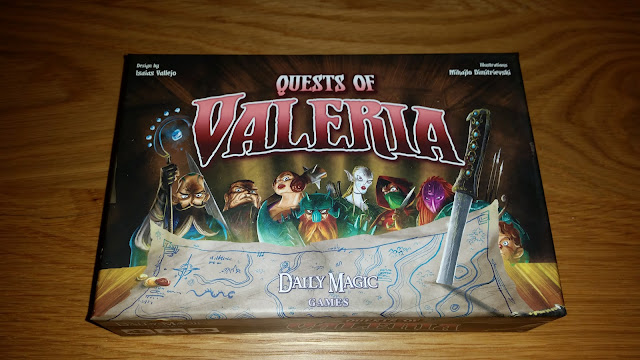 In Quests of Valeria you play the role of a Guild Master, recruiting and dispatching Citizens to complete quests posted in a tavern in the Capital City of Valeria to earn Victory Points. The player with the most Victory Points at the end of the game wins.

Quests of Valeria is a unique set collection game where players gather Citizens to fill requirements on a Quest. Hire Citizens from the line in the Tavern that provide you with additional actions to build combo's of free actions, and i mean where better to find willing recruits for your adventures then the pub. 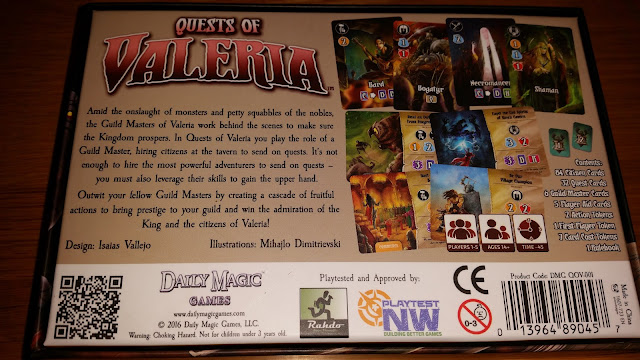 It plays 1-5 players, yes it comes with a solo option, which is always appreciated of course. Ages 14 and up, it can be played by younger players but they may not get the chaining of cards you can do so judge with your smaller ones to see.  Playtime 4 minutes... games i have tried have run at about 30 minutes on average. Its really not a hard game to learn and teach either so the first game may be around 45, but it will get a lot faster than that..... 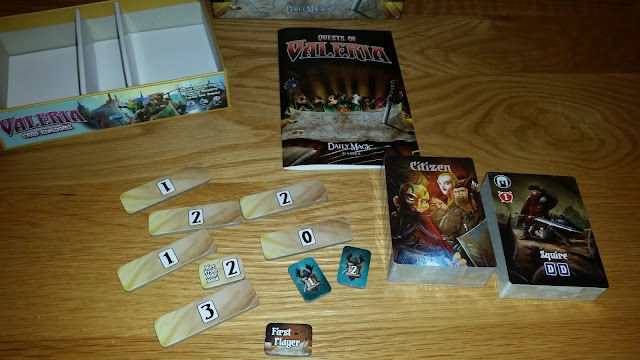 Inside the box you dont get too much, but then you dont really need too much to play the game!  You get 2 packs of cards, a first player token, and 2 action tokens, that you pass on when you complete each of your actions for a turn.  Then the card cost tokens.  That will get spread out showing you well, the card cost. 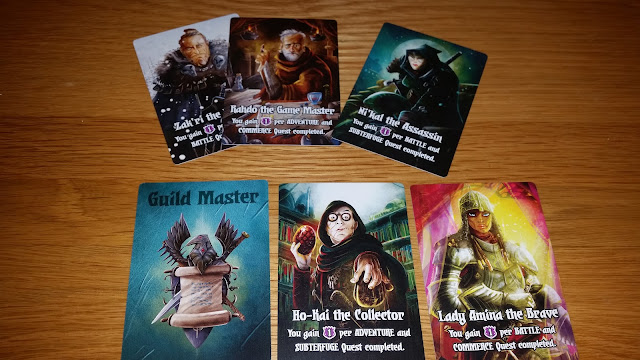 At The start of the game each character will get given a card to represent the guildmaster they are using.  This is kept secret from the other players, and they will provide you points benefits for certain kinds of quests, battle, adventure, subterfuge etc....  This then makes you look to focus more on that type, but then.. you do not want to look like you are going for some quests either or your opponents may figure out what you are after, if they are paying attention that is. 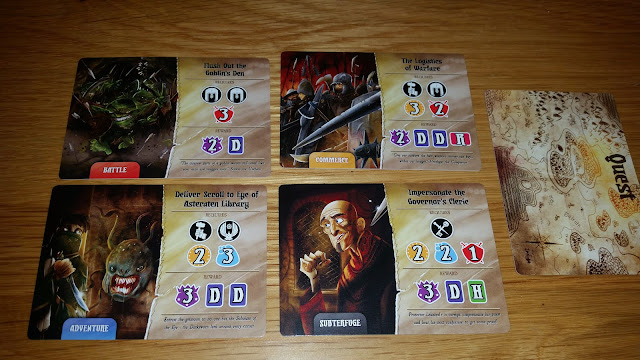 The Quest cards are all different, with their type, and what you require to complete them.  So for example, one may require a holy symbol on one of your guild, a worker symbol, 2 gold and 2 magic, so if you can put in cards that equal that, you can complete  the quest.  You also get a list of the rewards you get for gaining the cards.  The art is lovely, and the titles and flavour text really pull you into the old days of D&D adventures, with some tongue in cheek comments. 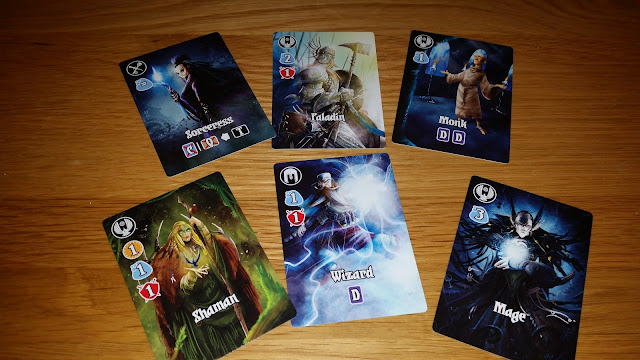 The art on the character cards is glorious, and varied, I am a real bag fan of in this game.  In the top left corner of each card you can see their affiliation, this is used for quests, like soldier, religious etc. 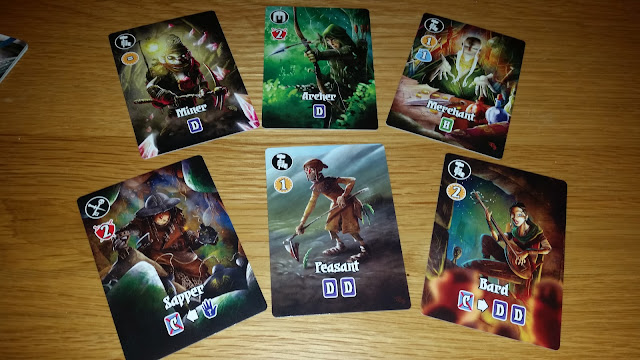 You also get to see what they do when you recruit them from the tavern byt he symbols n them... Yes there are a few, but each player gets a little key card with them all on.  Take the peasant for example, for one of your two actions you could hire him, which them lets you draw two cards, which would be 3 actions in total, all done for the cost of 1.  Trying to work out these chains are part of the fun of the game, as 1 action could net you a whole load more if played right.

You can see how the game looks set up... above each card is the cost to purchase it to your guild.... which is laid out in front of you.  The cost varies up on the line with the leftmost card always free, and the right most the most expensive.  You can always spend 2 to play a card from your hand.  What is the currency you may ask? well its cards from your hand.  you discard that many cards and gain the card you wish into to your guild to then be sent on adventures. 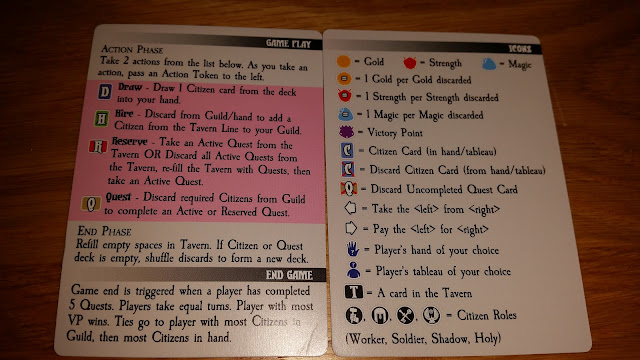 On your turn, you can perform two Actions from any of the four below, including the same one twice.  These are handy reference again on the cards that each player will have. 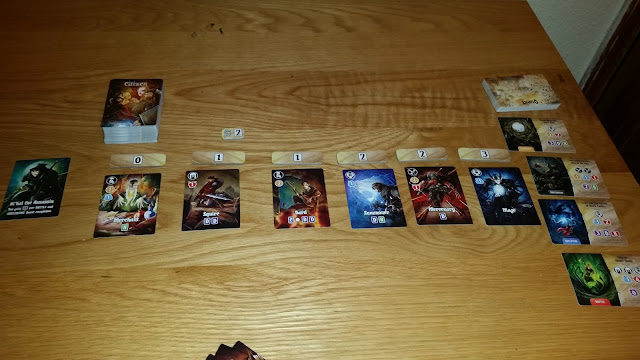 When a player completes 5 Quests, the game ends and player's reveal their Guild Master and count up Victory Points.

So that's the basics... Simple right? well yes... in its application, but there is a lot fo depth here, chaining up card combos that can let you do all sorts of thing, and its really satisfying when you can pull of something that ends up being a 3 or 4 action move.  There is plenty of thinking in the game required, but it didn't leave me sat for ages, i was planning ahead in my opponents turns with contingency and if you can keep up a fast pace the game will just fly by. 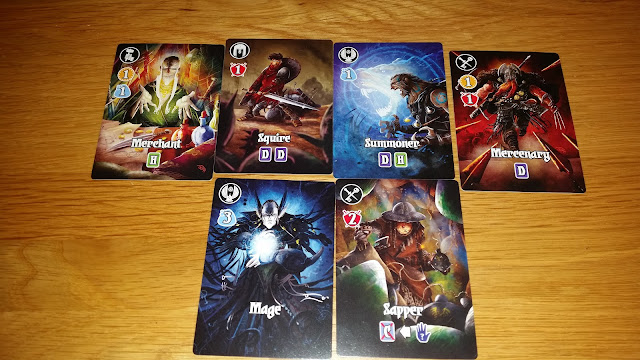 I have built my guild up nicely, remember these are not the cards in your hand, but the ones you have hired. 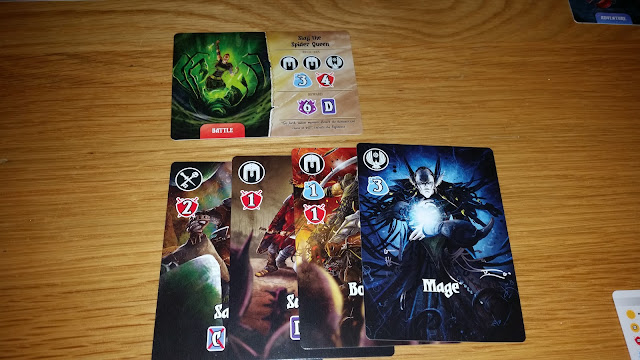 Here I use four cards to complete a quest, yes I am overspending one magic, but sometimes you have to, to ensure you can complete the quest, though of course the best option where possible is to be as economical with your guild as you can to get the best value for your cards.


It looks great, and the components are nice quality, though you will want to sleeve the cards as they do go through a lot of sliding about.  The game is easy to learn and teach, well easy to learn if you watch some videos that is... sadly the rulebook is not well laid out and over-complex, and may put some people off, but then Mana Surge suffered a similar issue.  This is however WELL worth the effort, as once you have it figured out, its a great game for groups, and plays solo OK as well with you trying to beat high scores.  i think the pricing of £24.99 is a little on the high side for such a game, but it is very enjoyable, and stunning to look at, with some classic humour in the flavour text and quest artwork, plus small and portable, and i mean if you are going to play a game about hiring guys from the pub... where better to take it then the pub with your friends.

With an RRP of £24.99 it may seem high for a little box, but its a really fun game and I think well worth it, with plenty of potential for expansion.  Head on over to your local game store and grab yourself a pack.